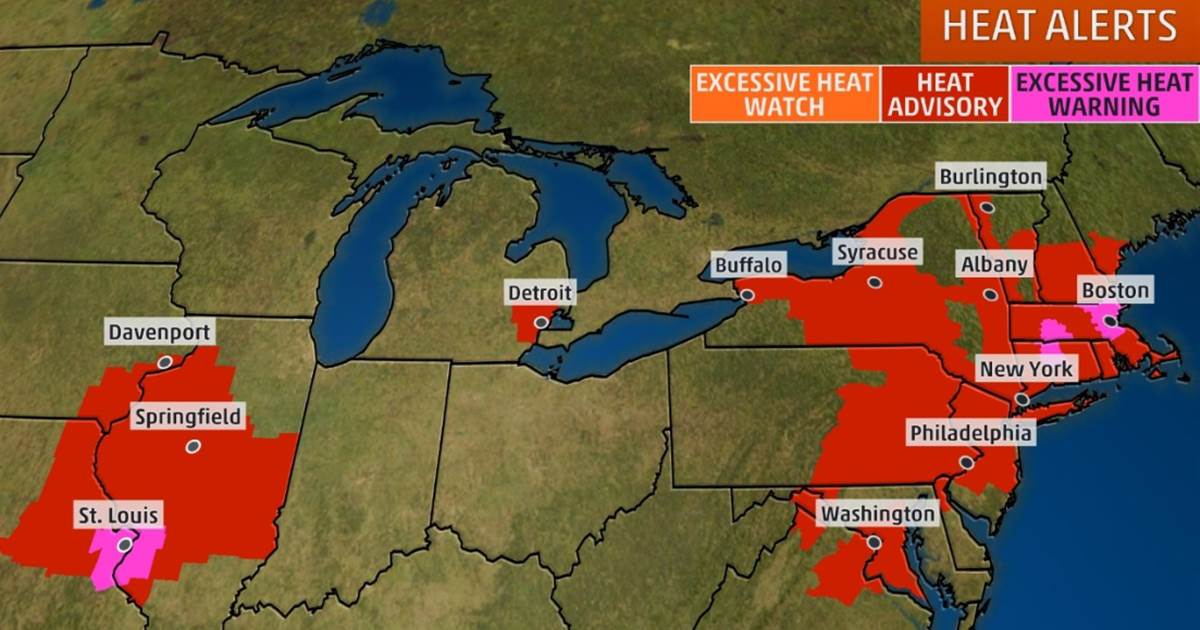 The summer may be coming to a close for many families preparing to send their children back to school, but summer temperatures aren’t going away any time soon.

A sweltering heat wave and increased humidity threatened to bring scorching temperatures across the Northeast, stretching from parts of Virginia up through New England with pockets farther out west in Missouri and Michigan, on Tuesday and Wednesday.

Approximately 68 million people were under heat advisories on Tuesday and Wednesday, according to NBC News’ Al Roker.

In parts of Massachusetts, Connecticut and Rhode Island the maximum heat index was forecast in the triple digits on Tuesday and Wednesday, according to the National Weather Service, and the overwhelming majority of the area was under a heat advisory.

Excessive heat watches were issued for parts of the Connecticut River Valley and eastern Massachusetts for Tuesday and Wednesday, where heat index values had the potential to reach 105 degrees.

Similarly, in Philadelphia, the heat was expected to be so intense, the school district said students would be dismissed early at 1 p.m. ET on both Tuesday and Wednesday. The district also canceled all after school activities.

In parts of New York, the heat index for the two-day stretch topped out at 102 degrees, according to the NWS.

New York Gov. Andrew Cuomo issued a statement, urging New Yorkers to use pools, beaches and cooling stations to beat the heat during the week.

“Be sure to check on neighbors who may be at risk and limit strenuous activity to ensure that you and your family remain safe and healthy during this stretch of extreme heat,” Cuomo said.

Farther south in parts of Virginia and in Washington, D.C., heat advisories were in effect from 12 p.m. ET to 8 p.m. ET, according to the NWS.

Out west, parts of Missouri and Michigan were both facing their own heat advisories with a heat index that could reach as high as 105 degrees for St. Louis and hot and humid conditions forecast in the Detroit area, according to the NWS.

Those looking to escape the heat are expected to find relief on Thursday as temperatures begin to fall across the region, Roker said.

Migrants allege Greece is illegally casting them back out to sea

Breakingviews – Moutai ladles out value from its punch bowl