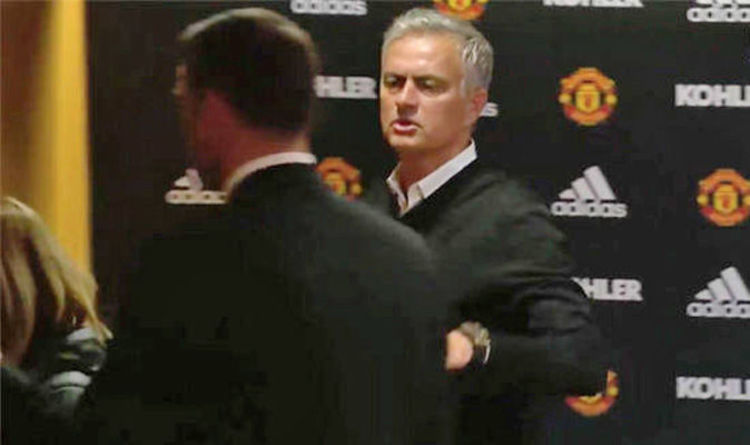 The Portuguese boss is under heavy pressure to get results, with United already six points off league leaders Liverpool after three games.

The strain appears to be mounting on Mourinho and Tottenham fans could be heard signing “you’re getting sacked in the morning” as Old Trafford was silenced.

But Mourinho came out firing in his press conference and defiantly defended his record as a manager.

“We lost last season here against Sevilla and we were booed because we deserved [it],” he said.

He then held up three fingers and said: “Just to finish. Do you know what was the result? Three nil.

“Do you know what this means, three nil but it also means three Premierships and I’ve won more Premierships alone than the other 19 managers together.

“Three for me and two for them.”

Before he walked out of his press conference, Mourinho reassured fans his side were united despite their second defeat in three games.

“Anyone who watched this game, one thing they know for sure is the team is united,” he told Sky Sports.

“The boys don’t give everything they gave if the team isn’t united. I think it’s the time to stop with untruths.

“The solidarity to play together for United and lose at home is hard for everyone, but the team is united. There is no union without the manager.”

After a goalless first half, Harry Kane opened the scoring shortly after the break.

A brace from Brazil playmaker Lucas Moura put the game out of reach for Manchester United.

Mourinho was also interviewed by BBC 5Live, where he bemoaned United’s poor defending.

“The best team, the offensive team, the team that pressed hard, that created chances and missed chances, but then from the first corner that Tottenham had they scored one goal and immediately that team was in the game,” he said.

“I’m frustrated but I’m happy with the players and the performance.

“I think we created more chances today than in the majority of our matches so of course I’m frustrated.

“I think the feeling is what I was trying to do was to keep their motivation and that’s not easy – normally when you play well you win it and I think that’s what I try not to let go away with the score. One goal comes and everything can change.”

On the defence, which has now conceded seven goals in three games, he added: “We worked amazingly well this week but there are things that you can’t resolve.

The poor defeat has once again raised serious doubts over Mourinho’s long-term future at the club as it leaves Manchester United 13th in the Premier League table, six points off leaders Liverpool.

After two losses in their opening three Premier League fixtures, United have now suffered their worst start to the season since 1992.

The trailblazing referee told that football 'is a man's game'

PGA Tour 'expects to generate over $100m' towards injustice causes

Talking Horses: Dream Of Dreams can lift the Sprint Cup for Stoute