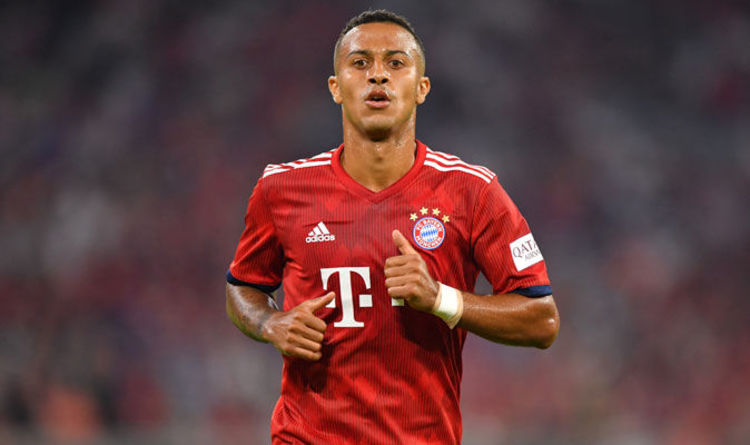 Thiago has been at Bayern since 2013, joining when Pep Guardiola took over, but could be on the move this summer.

According to Sky Germany Real Madrid are interested in signing the Spain international.

Thiago is said to be the only player Julen Lopetegui requested when taking over as Real Madrid boss.

Lopetegui worked with Thiago with the Spanish team during his spell as international boss and at under 21 level.

The report comes at a time when Luka Modric’s future is uncertain due to links with Inter Milan.

Madrid are desperate not to lose the Croatia star having already parted with Mateo Kovacic and Cristiano Ronaldo, and the change of manager.

Kovacic completed a loan move to Chelsea yesterday in part of the deal to see Thibaut Courtois join and leaves Madrid short of numbers in the middle.

Thiago was named among a number of players who could leave Bayern this summer after Niko Kovac took over.

However it is now understood that Bayern want to keep the midfielder and would only accept a huge bid.

He was linked with a move back to Barcelona, but they’ve already signed Arturo Vidal and are interested in Adrien Rabiot and Paul Pogba.

Thiago has also previously been on Manchester United’s radar but the English transfer window shut yesterday at 5pm.

In May Thiago admitted his future was uncertain under the incoming manager.

He told Mundo Deportivo: “Let’s see. I told you I renewed with Bayern last year, but it’s very complicated. Football is very difficult.

“I’m very much about enjoying the moment. You don’t have to focus on the future.

“Now, I’m thinking about the World Cup, I’m living in the present and if a moment comes for you to think about it, I immediately focus on the World Cup.”

On this day: Born May 27, 1967: Paul Gascoigne, English football player

Barry Hearn: 'The mental health of a nation is strengthened by sport'

None of my staff has undermined coronavirus messaging: UK PM Johnson