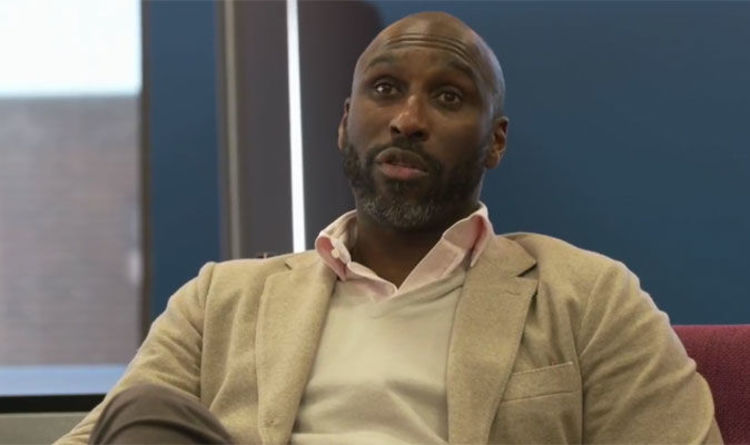 Arsenal shocked the footballing world by luring Tottenham centre-back Sol Campbell across the north London divide back in 2001.

The England international joining Arsenal on a free transfer after his White Hart Lane contract expired but it went down badly with Spurs fans.

Campbell was appearing alongside Paul Ince and Paddy Power on a Goggle-box style Facebook event for the Irish bookmaker when he made the claim.

The former footballers were reciting the toughest places they’d played when Campbell said: “Spurs was just a lot of noise. I had a couple of beer cans chucked at me.

The comment took Ince by surprise, who said: “I’ve had no bricks chucked at me.”

Campbell responded: “No. Coach-wise. When you’re on the coach.

“You have to have a strong mentality and make it work in all that pressure.

“People don’t realise when you have that pressure personally on you and you have to perform, keep cool, do your job and play a game, you learn a lot from that as a human being and a footballer.

“I think a lot of people don’t really appreciate that.

“They see it’s a tough game but they don’t know how tough it can be.

And when asked about Arsenal’s performance on Sunday in the Carabao Cup final, Campbell was scathing.

The Gunners were humiliated 3-0 by Manchester City and lacked any fight.

And Campbell reckons it was simple things going wrong.

“When I look at Arsene Wenger’s team during the League Cup final, simple things let them down,” he said.

“Awareness, detail, fighting, running and earning the right to play.

“If you go out with no fear, at least if you lose the other side had to work really hard to beat you. Manchester City didn’t need to work hard to beat Arsenal on Sunday.

“Arsenal didn’t turn up in any capacity, and elementary mistakes cost them.

“You saw it especially with the first goal – Shkodran Mustafi had no awareness about him.

“You really need someone to pick up details like that and demand more of the team. That needed to be picked up on at the start of the season, the minute it was seen creeping in by a coach.

“The player needs to be told: ‘This is not the correct way, we don’t want these types of performances or mentality.’”

Mystery of the 1998 World Cup final

Jack Charlton: a footballing giant who was forever a man of the people | Kevin Mitchell

'Enjoy the moment': Mikel Arteta tells Bukayo Saka to relish his good form as he continues to shine

Why squatting stretches could add years to your life