Indonesia has passed a controversial law punishing sex outside marriage with up to a year in jail – for citizens and tourists alike.

Unmarried couples will also be banned from living together and doing so will be punishable by six months in jail.

Similarly, adultery will be a punishable offence but charges must be based on police reports lodged by the accused’s spouse, parents or children.

The promotion of contraception and religious blasphemy will be illegal too, according to the new code.

Additionally, the law will make abortion a crime, but it adds exceptions for women who have life-threatening conditions and for rape. 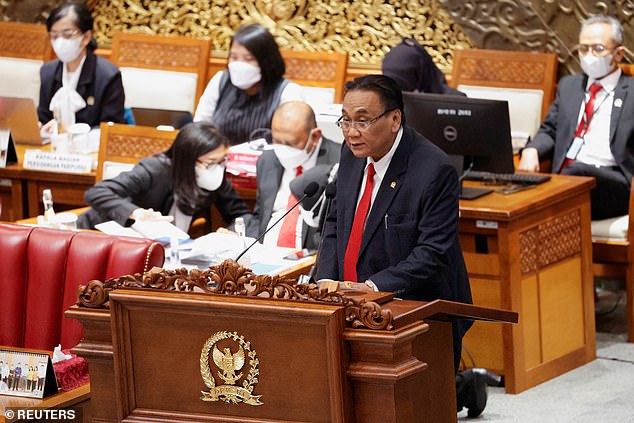 Bambang Wuryanto, head of the parliamentary commission overseeing the revision of the law, speaking during a meeting as the law is passed

This is provided that the fetus is less than 12 weeks old and is in line with the 2004 Medical Practice Law. The code also preserves the death penalty, restores a ban on insulting the president and vice president, and expands on the Blasphemy Law.

Insults to a sitting president must be reported by the president and can lead to up to three years in jail.

The National Commission on Human Rights and other groups have called for Indonesia to abolish capital punishment, as dozens of other countries have done.

The death penalty will be imposed alternatively with a probationary period. It means that a judge cannot immediately impose a death sentence.

If the convict behaves well within a period of 10 years, the death penalty will be changed to life imprisonment or 20 years imprisonment. 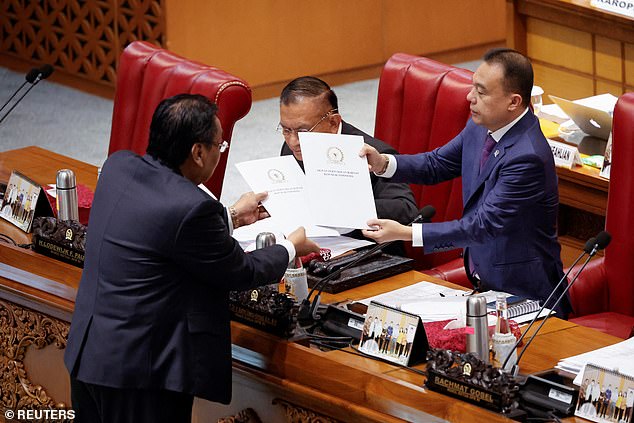 Sufmi Dasco Ahmad, right, deputy speaker of the House of Representatives, is handed the report of the new criminal code

The new law must be signed by the president after it is approved, according to the Deputy Minister of Law and Human Rights Edward Hiariej. It will not apply immediately.

Mr Hiariej said that the new law has a lot of ‘implementing regulations’ that must be worked out, so it is ‘impossible in one year’ but it takes a maximum of three years to transition from the old code to the new one.

The government provided the ‘strictest possible explanation that distinguishes between insults and criticism’, according to Mr Hiariej. 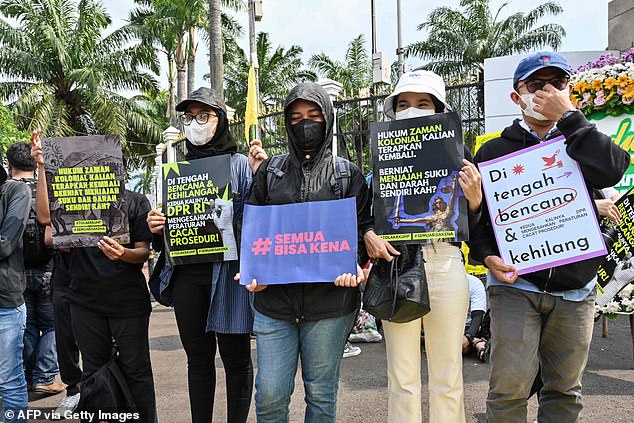 Some of the revisions were criticised by campaign groups as overly broad or vague and warned that rushing to instate them could penalise normal activities as well as threaten freedom of expression and privacy rights.

But some advocates hailed it as a victory for the country’s LGBTQ minority – as lawmakers agreed to repeal an article proposed by Islamic groups during that would have made gay sex illegal.

Indonesia, which is the world’s fourth-most populous nation and third-largest democracy, proclaimed independence on August 17, 1945.

In 2019, another bill was poised to come in, but President Joko Widodo urged lawmakers to delay a vote on it amid mounting public criticism that led to nationwide protests. 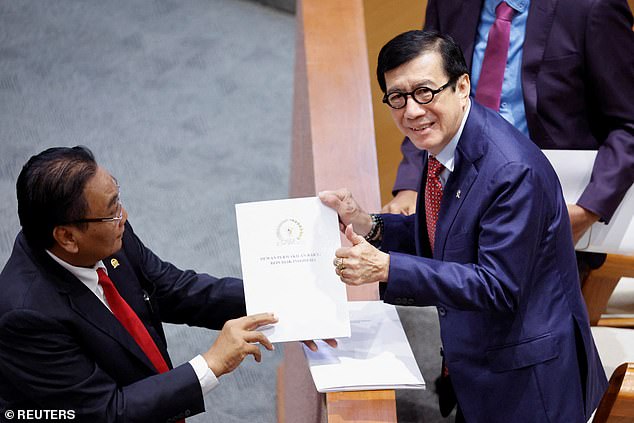 In the law-making process, opponents said it lacked transparency and contained articles which discriminate against minorities.

Law and Human Rights Minister Yasonna Laoly was instructed by Mr Widodo to get input from various communities while lawmakers discussed the articles.

In November, the bill was finalised by a parliamentary taskforce and lawmakers unanimously approved it in what Mr Laoly praised as a ‘historic step’.

Mr Laoly said in a news conference: ‘It turns out that it is not easy for us to break away from colonial living legacy, even though this nation no longer wants to use colonial products.

‘Finalizing this process demonstrates that even 76 years after the Dutch Criminal Code was adopted as the Indonesian Criminal Code, it is never too late to produce laws on our own.

‘The Criminal Code is a reflection of the civilization of a nation.’ 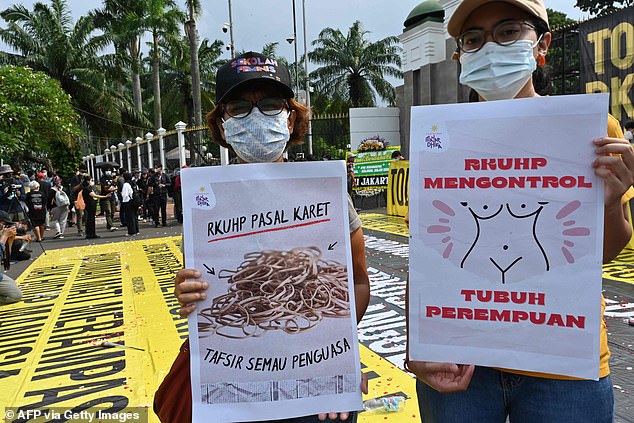 Human Rights Watch said that laws penalising criticism of public leaders are contrary to international law, and the fact that some forms of expression are considered insulting is not sufficient to justify restrictions of penalties.

Andreas Harsono, a senior Indonesia researcher at the group, said: ‘The danger of oppressive laws is not that they’ll be broadly applied, it’s that they provide avenues for selective enforcement.’

He added that many hotels, including in tourism areas like Bali and Jakarta, will risk losing their visitors. 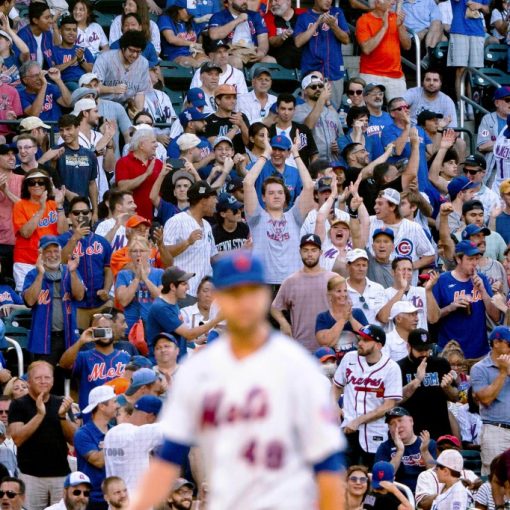 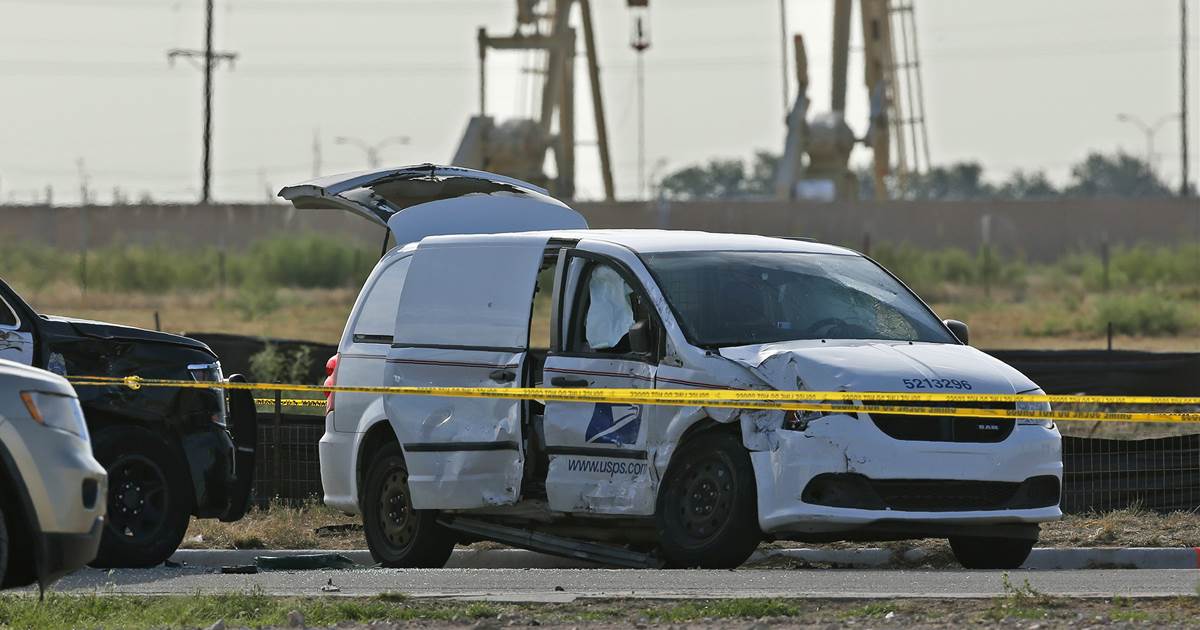 As a community is still in shock over the 7 dead and 22 injured in Saturday’s mass shooting in west Texas, new […] 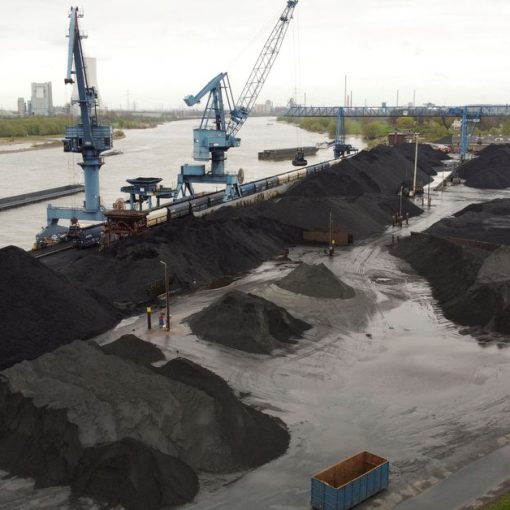 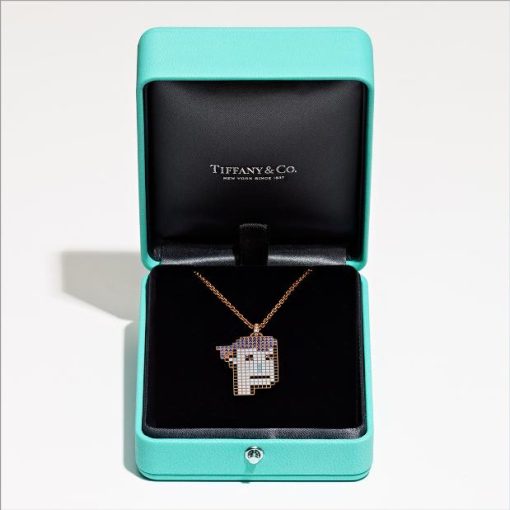 Written by By Zoe Sottile, CNN On Friday, Tiffany & Co debuted and quickly sold out a limited collection of 250 custom […]