Kourtney Kardashian and her husband Travis Barker put on a tender display as they stepped out after meeting with Kim Kardashian following the conclusion of her divorce from Kanye West and amid backlash over her Balenciaga relationship.

The couple looked every inch the newlyweds as they reached for one another’s hands upon leaving Travis’ recording studio, DTA Records Studios, in Calabasas on Tuesday. 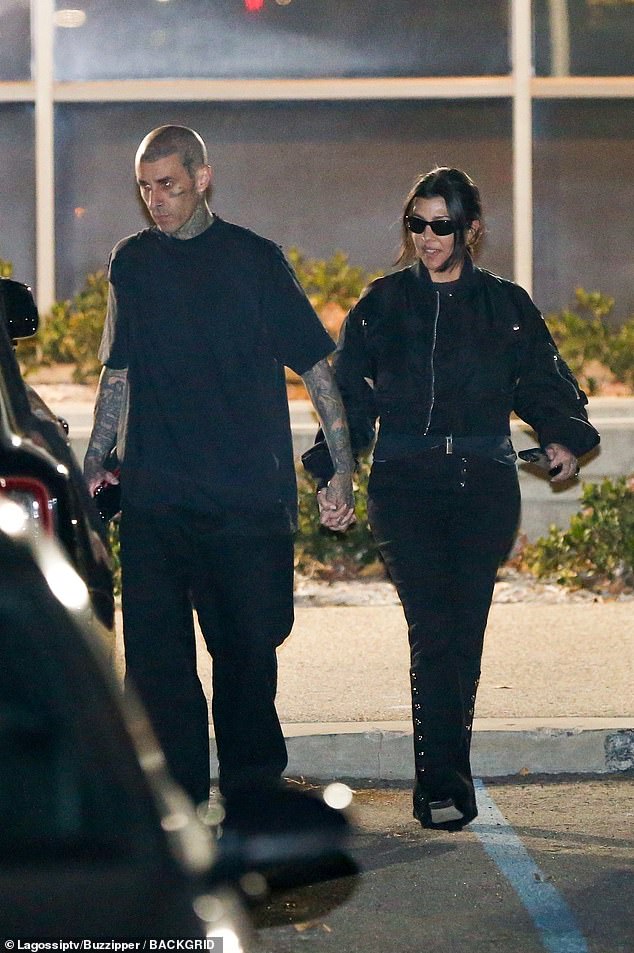 Loved-up: Kourtney Kardashian and her husband Travis Barker put on a tender display as they stepped out after meeting with Kim Kardashian following the conclusion of her divorce from Kanye West and amid backlash over her Balenciaga relationship

Kourtney held hands with her new husband as they walked outside of the studio, both dressed in black.

She wore an edgy black zip down jacket, matching trousers with silver buckles along the hem, and a pair of fashionable frames.

Her hair was slicked back into a ponytail with a few loose tendrils framing her complexion.

Travis wore a baggy T-shirt, black trousers, and a backpack hanging from a single shoulder. 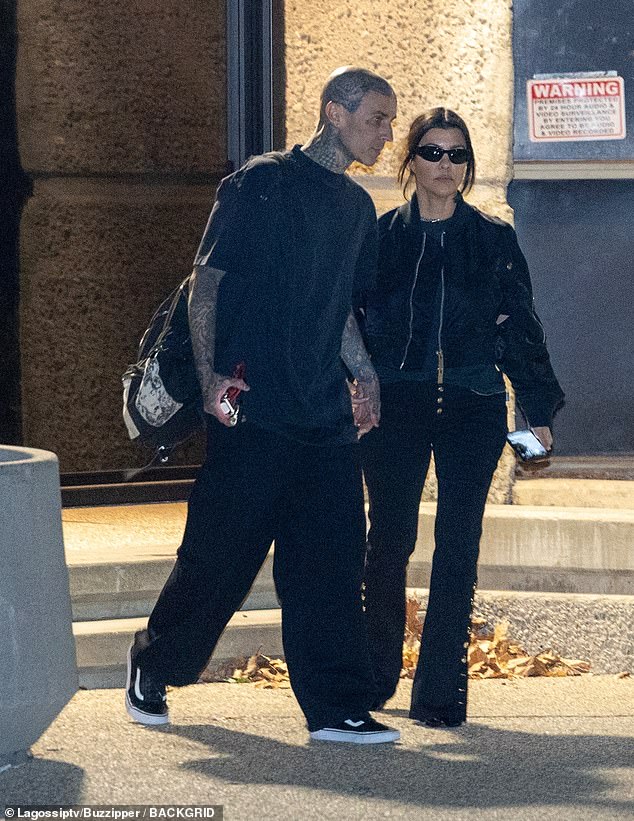 Aww: Kourtney held hands with her new husband as they walked outside of the studio 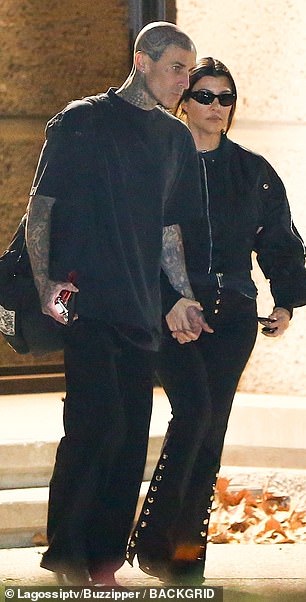 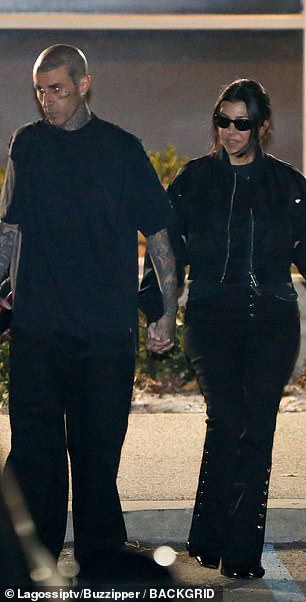 Matching! Kourtney and her love both wore black for the occasion 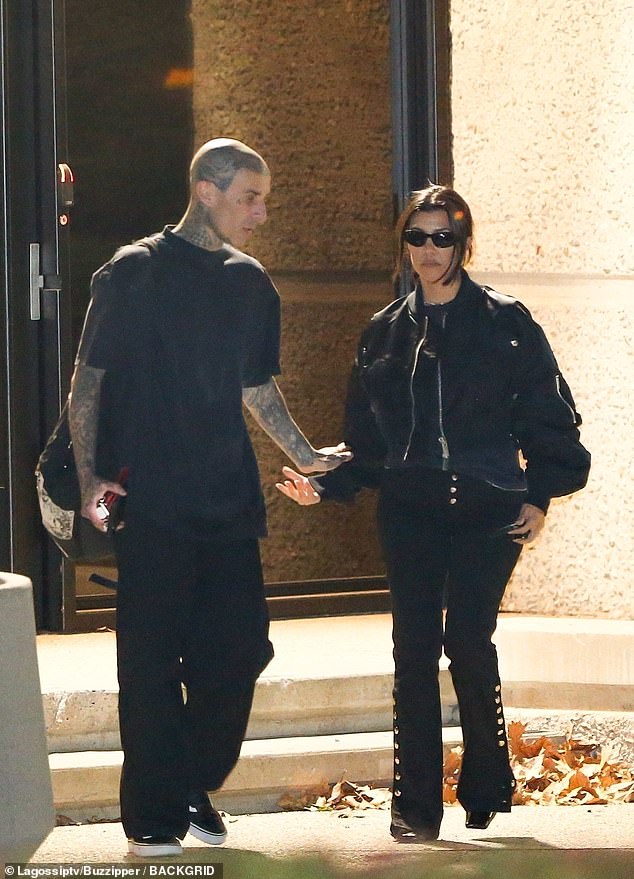 Tender loving care: The couple reached for one another’s hands as they departed DTA Records Studios

The couple appeared to be leaving a family conference held at the studio following the conclusion of Kim’s divorce from Kanye West and amid widespread backlash over her refusal to cut ties with Balenciaga.

In the photo shoot, the children also appeared to be surrounded by empty wine and champagne glasses, further contributing to the disturbing setting. 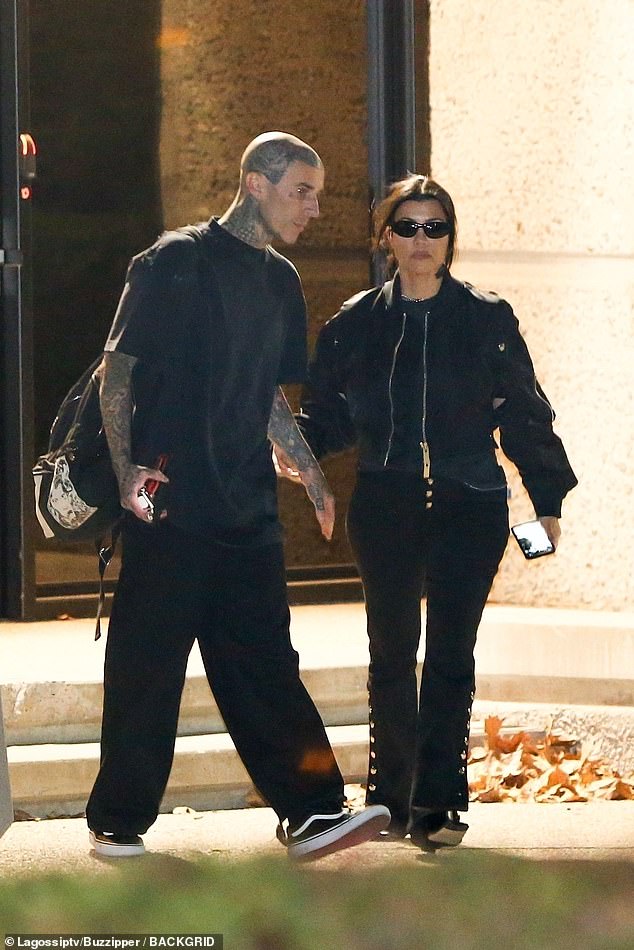 Showing their support: The duo appeared to have just taken part in a family conference with Kim and Kris

Throwing shade! Kourtney sported a pair of stylish sunnies as she stepped out

Kim said in a statement that she was ‘re-evaluating’ her relationship with Balenciaga, but fans lambasted her refusal to cut ties immediately over the offensive images.

Kim was also reported on Tuesday to have finalized her divorce from Kanye West after nearly two chaotic years, according to TMZ.

The exes had finally reached an agreement over custody of their four children, as well as they parenting plans and the division of their multimillion-dollar real estate portfolio following repeated attempts by West to slow down the proceedings, which saw him firing multiple attorneys along the way.

According to documents viewed by the publication, Kim will be getting $200,00 per month from her ex-husband. 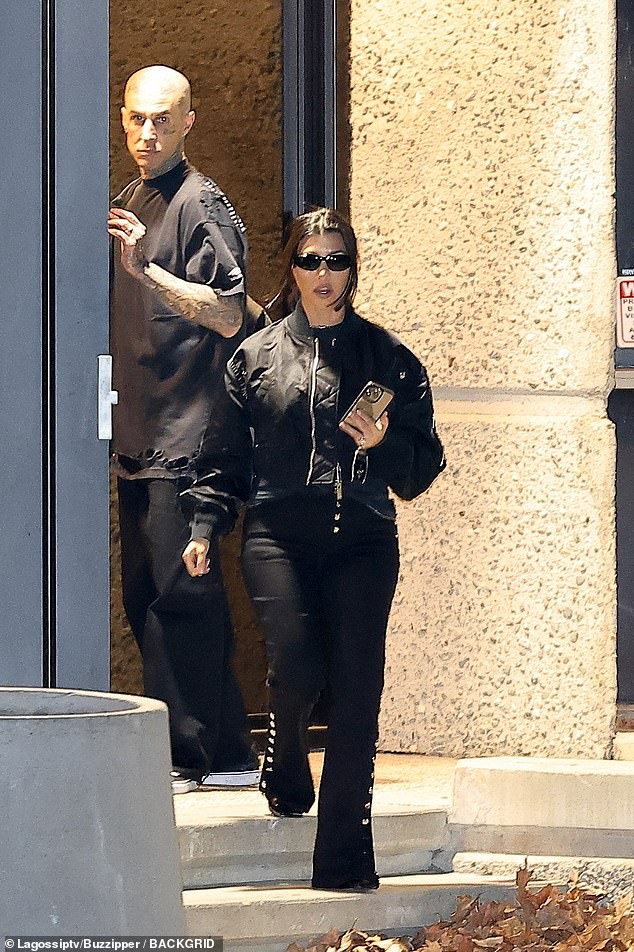 Walk this way: The star made her way down the staircase as her husband shut the door behind 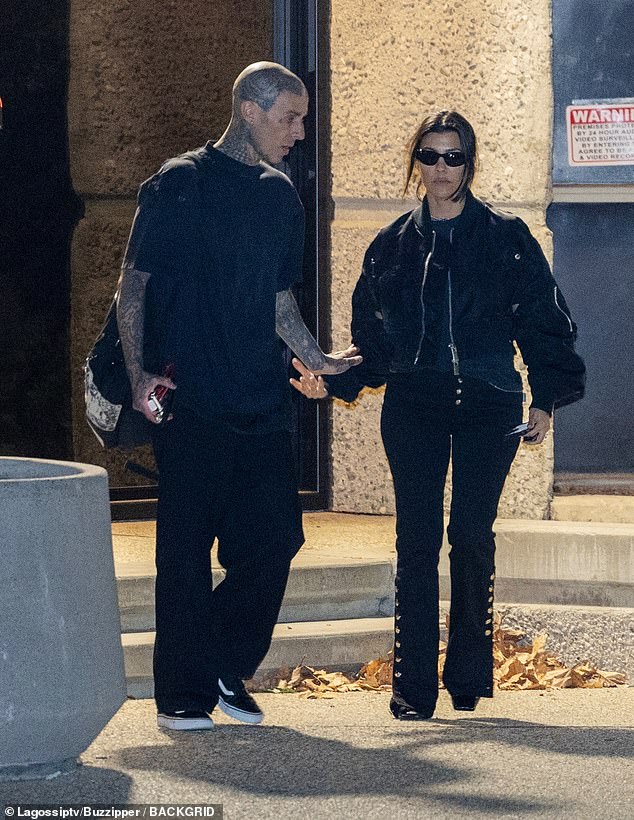 Newlyweds: The couple tied the knot three times this past year, with their most recent ceremony being in May 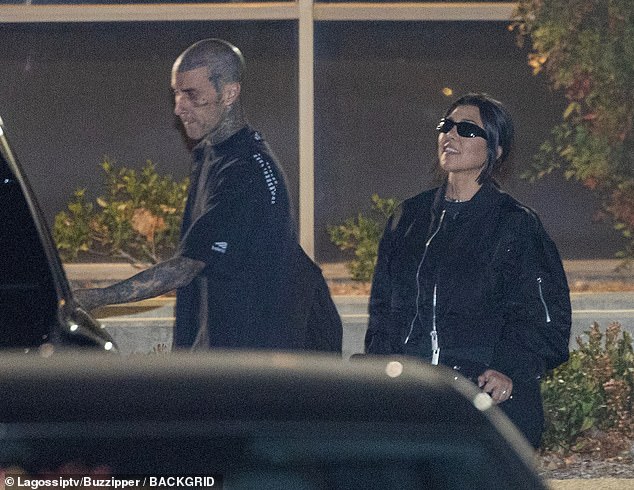 Happy camper: Despite the scandal involving her sister, Kourtney managed to let out a smile

The significant sum would only seem like a small amount of money when compared against the fortunes of Kim and Kanye, both of whom have been declared billionaires in the past by Forbes.

However, West’s net worth has plummeted after his Yeezy deal with Adidas was canceled by the sports brand after incendiary anti-Semitic comments repeatedly made by him.

Without the money from the deal, Kim appears to now be significantly wealthier than her ex-husband, though it’s not clear if the final figures of the deal were arranged before or after Kanye’s destructive behavior.

The Kardashian–Jenner clan has been known to film its family meetings for both Keeping Up With The Kardashians and its bigger-budget Hulu follow-up The Kardashians, though they didn’t appear to be followed by cameras while outside the studio. 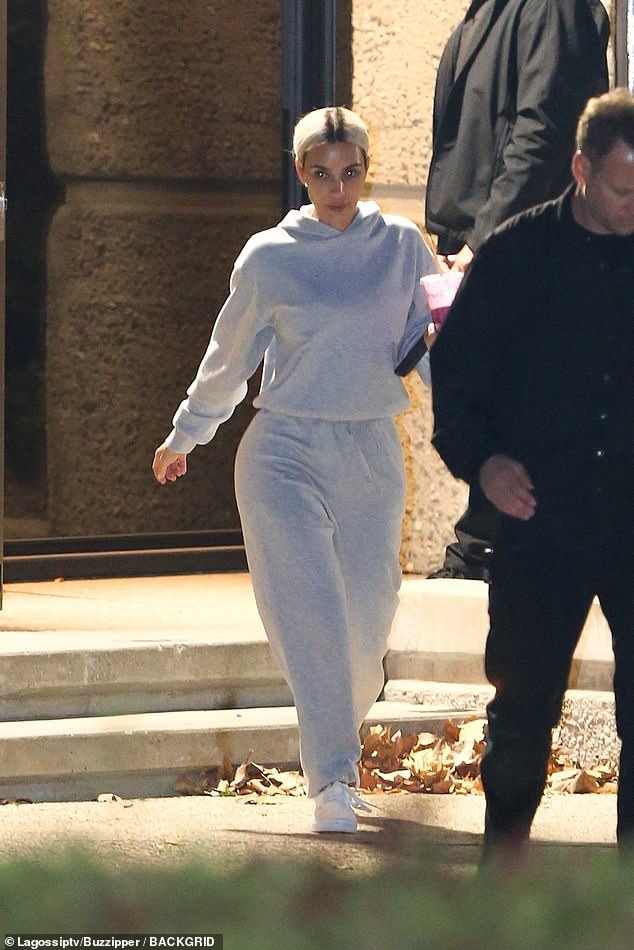 Family matters: Kim was reported on Tuesday to have finalized her divorce from Kanye West after nearly two chaotic years, according to TMZ 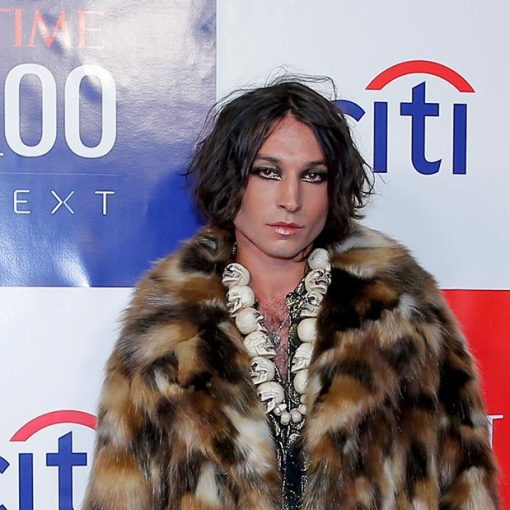 “Having recently gone through a time of intense crisis, I now understand that I am suffering complex mental health issues and have […] 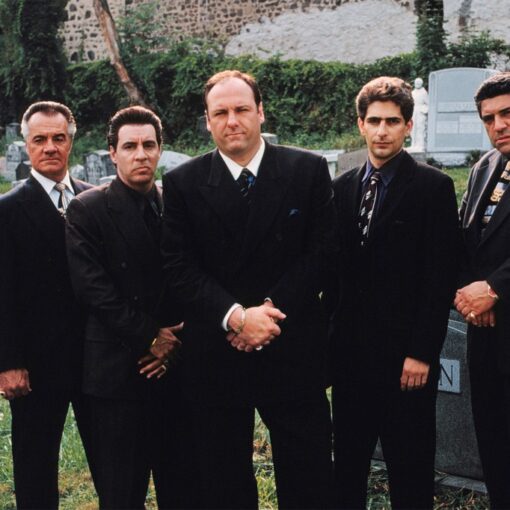 James Gandolfini proved he’s always been a generous man. The late “Sopranos” star looked out for his fellow castmates and gifted each […] 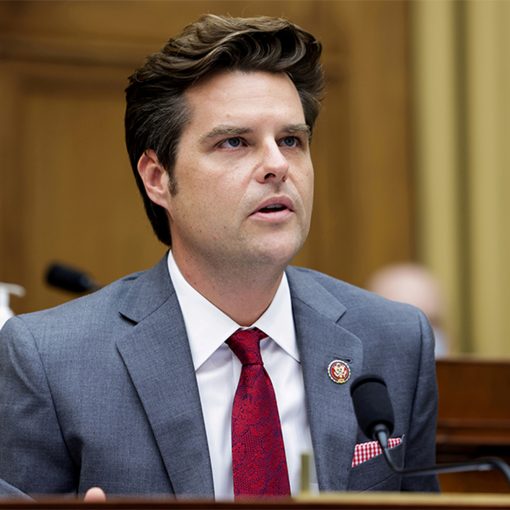 The FBI has questioned multiple women who claim they were paid to have sex with Florida Rep. Matt Gaetz and his friends, […]

The Watch House by Bernie McGill(Tinder Press, £14.99) Her family have emigrated to Newfoundland for work and she is left behind and […]