The University of Southern California’s Black Student Union invited students to a free, private screening of the recently released Wakanda Forever, but asked white students not to attend.

A post to the BSU’s Instagram page featured two graphics for Wednesday’s event, which was described as a ‘Black-centered’ activity that would ideally not be inclusive of other races – meaning it was potentially illegal.

‘We are lovingly curating this space to support and affirm Black people and Black joy. We ask that our non-Black allies support our intention of creating a Black affinity and celebration space,’ reads the event description on the post.

The screening of the eagerly-anticipated Black Panther sequel was held at the local Santa Barbara Arlington Theatre.

UCSB Media Relations Manager Kiki Reyes told the College Fix that members of the BSU had not informed the school that the event was going to be segregated.

‘This screening is hosted by local off-campus organizations, and the link you sent is just the BSU inviting its members to attend. We have been informed that the event is open, and no student or community member is precluded from registering or attending,’ Reyes told the outlet in an email.

But the tone of the flyer for the event makes it clear white students would not be welcome, sparking claims the union was trying to exclude them by stealth. 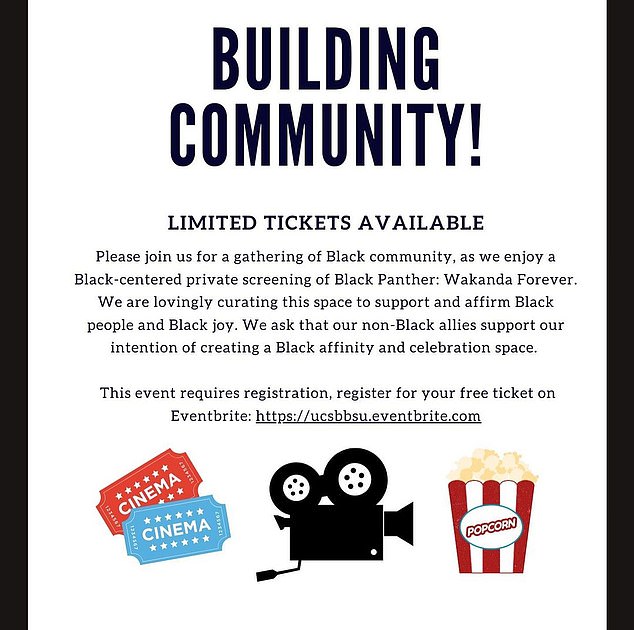 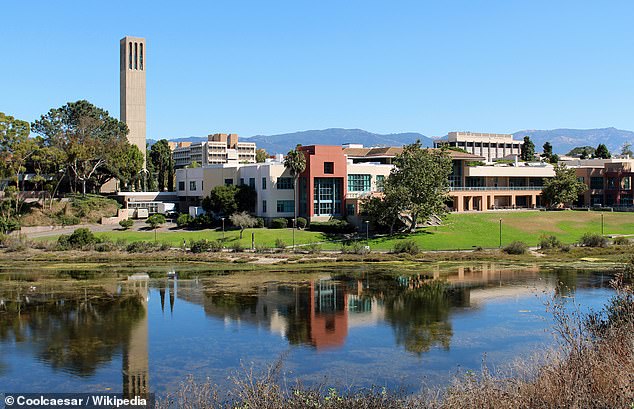 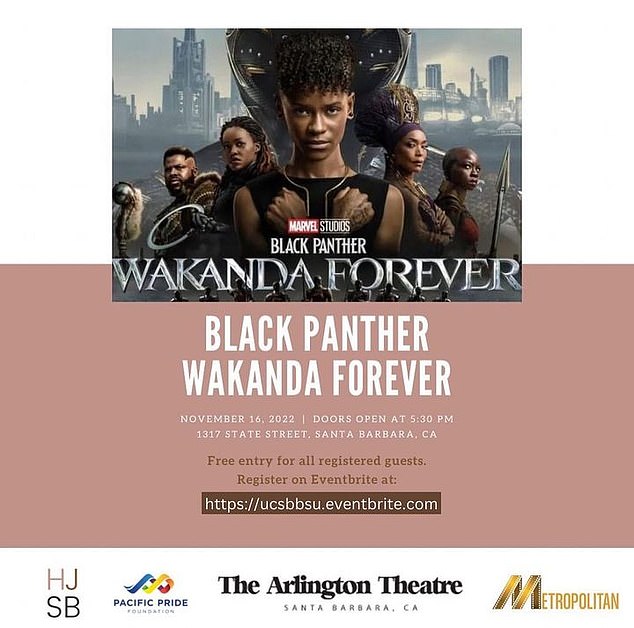 In temporary stories posted the BSU’s Instagram page on Wednesday evening, it appeared as though the club had chartered a party bus to transport the students from the school to the movie theater.

Those videos showed students exclusively of color dancing on the party bus on the way to the movie.

Wakanda Forever is the highly anticipated sequel to 2018’s Black Panther, a Marvel film that followed the stories of the leaders of a fictional region in Africa called Wakanda.

The original film and its sequel became moments of specific cultural significance for the black community.

It is unclear how much, if any, university funding is used to support the school’s Black Student Union. Though most officially affiliated student clubs on a given college campus are eligible for funding.

UCSB does have an Office of Black Student Development, which aims to employ at least eight full-time staffers ‘working to support UCSB’s Black undergraduate and graduate student population.’

The office describes itself as ‘an affirming response to the Black Student Union Demands going back to 1968, and most recently through the 2013 and 2019 BSU Demand.’

UCSB is a state-run university, meaning the tax dollars of Caliornians directly fund the school and its many programs. 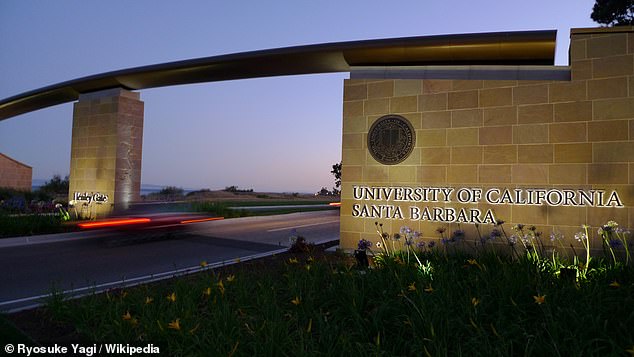 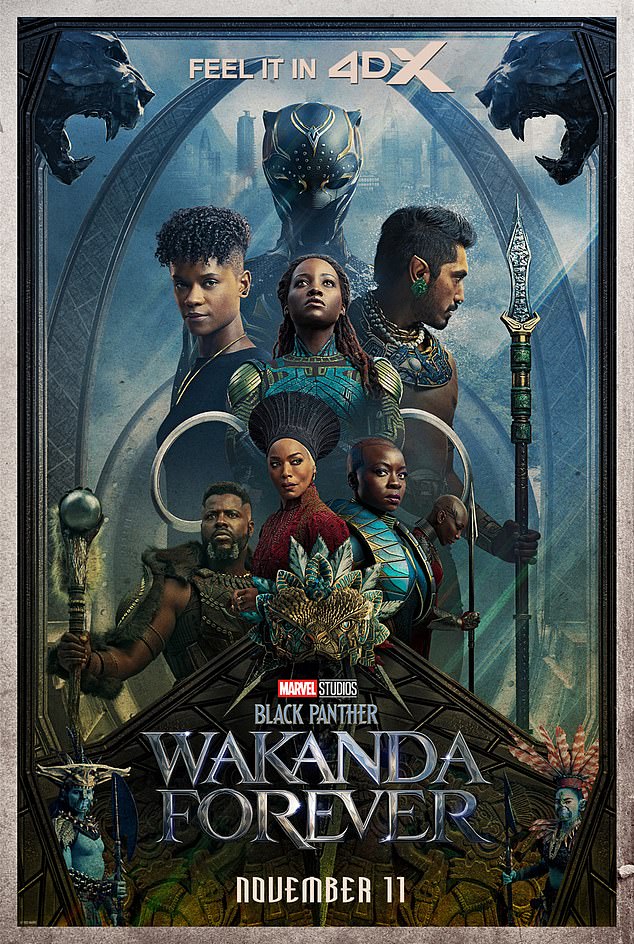 The film, like its predecessor, revolves around life and power struggles in the fictionalized, technologically advanced African nation of Wakanda

The incident in Santa Barbara this week is not the first instance of racially preferential behavior on a college campus revolving around Wakanda Forever to have occurred this month.

Last week, the Stanford University Graduate Student Council announced it has 450 tickets for a November 10 screening of Wakanda Forever, 100 of which it was reserving for black students.

Black students also received priority in signing up for the bus to the movie theater.

The Stanford Review initially reported on the issue, writing that the event hearkened back to the Jim Crow South.

‘Does discrimination at movie theatres and on buses sound families? Yes, that’s correct… It was common in the Jim Crow South.

‘The GSC is hell-bent on bringing prejudice in entertainment venues and transit back presumably under the guise of anti-racism, equity, and inclusion, the GSC is actively discriminating against non-black students,’ reads the piece.

The Review also gestured toward the question of funding for race-specific or segregated activities.

‘Where does the GSC get the funding for all of these activities? They oversee the distribution of the Graduate Student Activities Fee, which is $141 per year for every grad student.

‘The GSC is literally using part of grad student tuition fees to discriminate against 96% of the grad student population,’ wrote Review staffers. 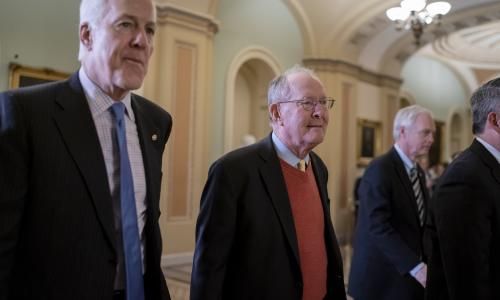 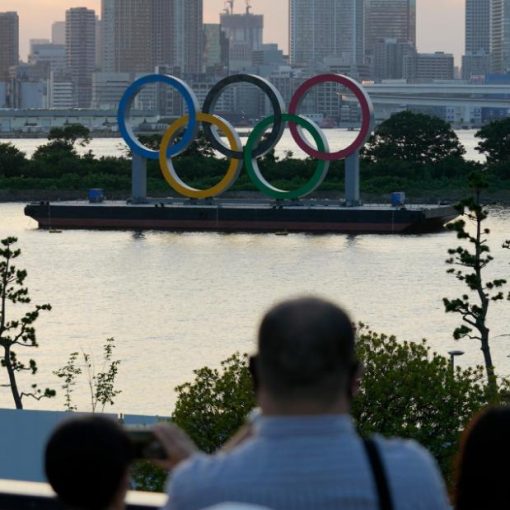 Kentucky’s lone abortion clinic is bracing for a legal fight against health regulators and the state’s anti-abortion governor. The stakes are high: […]