England’s World Cup squad have settled into their luxury palm-tree laden hotel with a mix of Arabic culture, 21st century technology – and the support of two sleepy camels.

As they embarked for the journey to Doha and their base at the Souq Al Wakra Hotel, manager Gareth Southgate gathered the 26-man squad together and told them: ‘We now decide how long and how far we go. We experience success. We experience adversity.’

To help ensure it is the former, the England management have carried out extensive measures to help the team feel at home, eat and sleep properly and concentrate on the World Cup tasks ahead.

Today, a van full of wide screen TVs and video consoles were delivered to the team hotel.

The players also have a support squad of nutritionists, physiotherapists and specialists who can advise on mindfulness and relaxation techniques.

On their first night after arriving on Tuesday, they were entertained with an evening of traditional Arab music after being greeted by flag-waving staff gathered in the reception area to applaud them. 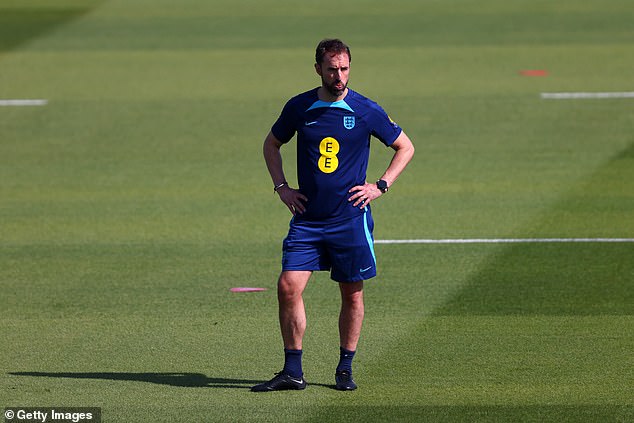 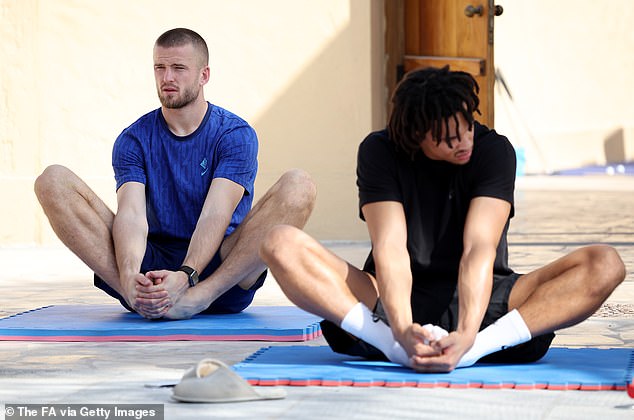 The squad is accompanied by a team of nutritionists, physiotherapists and mindfulness specialists

And to make them feel more at home, they enjoyed cabaret sung by a singer crooning Robbie Williams’ hit Angels.

Staff handed out local delicacies. And a camel and a falcon were on show, both symbols of Qatar.

Captain Harry Kane and his men were given flowers and chocolates before being shown to their rooms where staff shape towels to make ‘friendly’ characters like swans and prince and princesses and place them on guest beds. 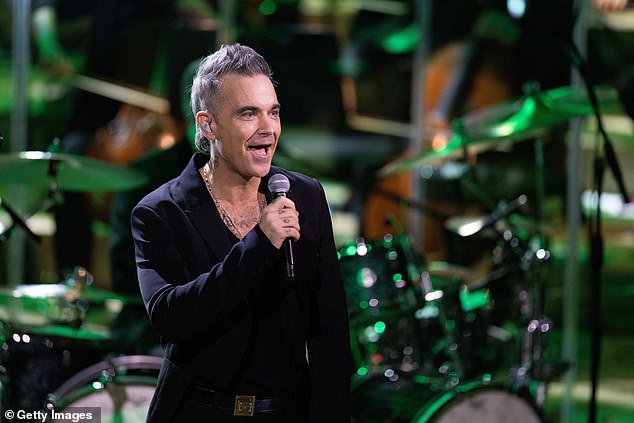 The alcohol-free hotel, set in a maze-like Arab souk, backs onto a popular beach where families and tourists can enjoy camel rides and swim in the sea.

The Football Association have taken over the five-star hotel for the duration of the tournament, with England’s first match coming next Monday against Iran.

Shortly after arriving on Tuesday evening, the entertainment at the Souk Al Wakra got into full swing with a lounge singer belting out hits. 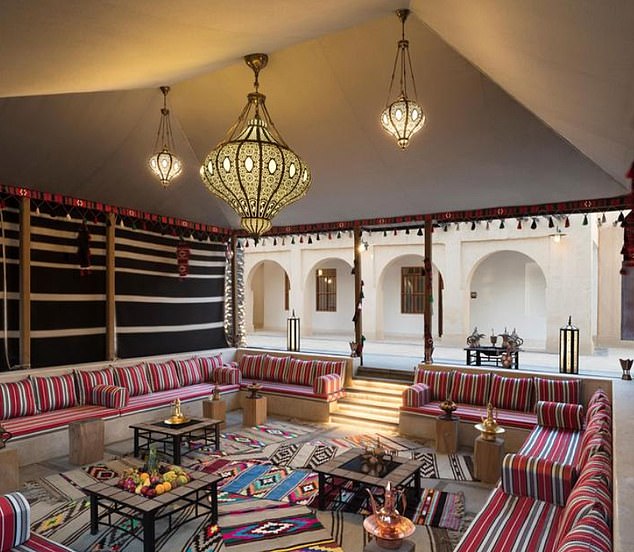 Accompanied by an electric piano, he sung Robbie Williams and then followed it with a rendition of US house and dance star Crystal Waters’s 1991 hit Gypsy Woman, about a homeless woman who sings for money.

A British ex-pat who passed the hotel likened it to Phoenix Nights, the sitcom about a working men’s club in northern England, saying: ‘The singer was very loud and right on note, but I don’t know how well it was all going down. There wasn’t much clapping.’

Qatari authorities have thrown a ring of steel of steel around the hotel, with police guards stationed every 20 yards in the bustling souk and roads around.

A police patrol boat bobs 300 yards offshore, and officers have been taking no chances, with even the ceremonial camel searched before meeting the England team. 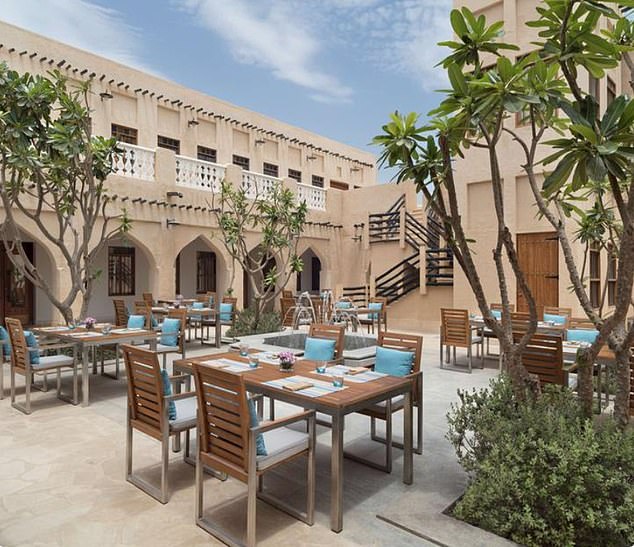 A policeman was seen lifting the rugs draped over the beast to check for any hidden weapons.

Security officials on camels also parade around the beach and outskirts of the hotel to keep a check on the team’s safety.

Southgate’s decision to stay at the Souq Al Wakra Hotel was largely based on logistics and transport links, with his chosen hotel a short drive from eight of the 10 tournament venues. 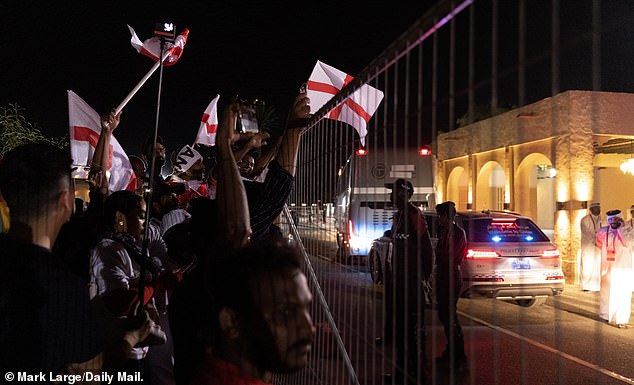 But an insider said today : ‘Gareth Southgate and two FA officials personally checked over the hotel about two years ago when they were deciding where to stay.

‘He said it was perfect except it needed a swimming pool. So they put one in. They took out a fountain and installed a pool.’

The hotel – which describes itself as ‘an elegant seaside stay’ – also has access to the beach and offers an on-site spa for full body scrubs with relaxing strokes, foot rituals, facials, reflexology and ‘hot-stone journeys’.

In addition, there are five restaurants, some with a sea view, with Western favourites or Arabic and Levantine dishes such mezze plates, mixed grill or local dish sawani. 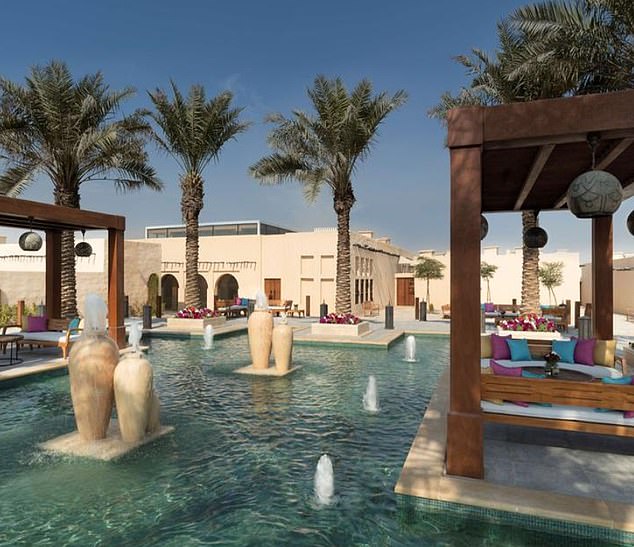 There is a mosque next door and the call to prayer rings out six times a day. The times change daily and today’s first call to prayer was at 4.33am and further announcements over a loudspeaker which booms over the hotel take place several times a day.

Southgate has asked for the players to be protected by a strict Covid bubble and when James Maddison met the media, reporters were provided with face masks by the FA.

In Russia 2018, players such as Eric Dier were allowed to venture out of the team’s hotel, shop and meet fans, but covid fears may mean players confined to their beach hotel close to the Persian Gulf. 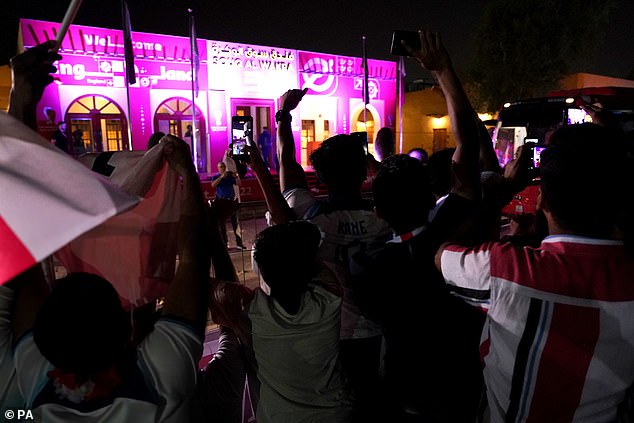 FIFA have installed a giant ‘England;’ monument next to where two sleepy camels laze on the sand next to a kids’ play area and World Cup flags and emblems have been placed along the sea front.

It is unlikely the players’ WAGs will be allowed to meet with them, but the FA has provided framed pictures of the women and their children inside each players’ rooms.

X-boxes and other video games have been laid on. West Ham captain Declan Rice scooped up a pair of socks from a funfair style crane machine and was heard joking while laughing: ‘That’s my dad’s Christmas present.’ 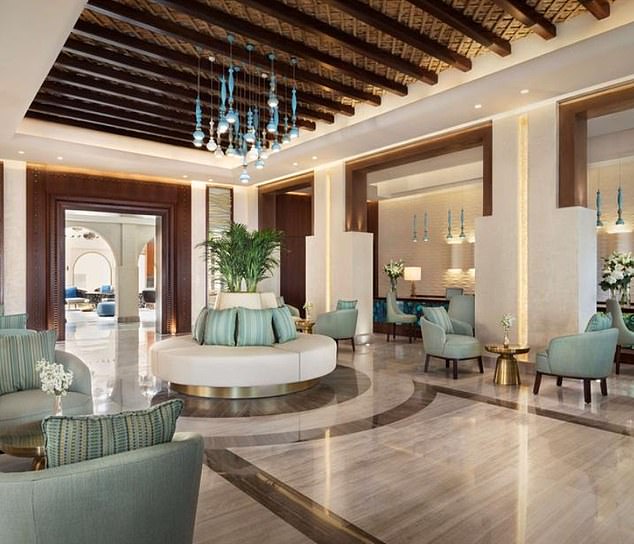 Despite there being a lack of fans from England with only days to go before the tournament begins, some genuine supporters have been outside the team’s hotel having travelled from India.

Shop owners Hadi Ali, Jamshi Mavoor, Shihas Erakkuman and Shihas Karisseeri flew to Qatar from Karela and showed off their passport stamps and match tickets after reports that ‘fake fans’ were being portrayed by Qatar World Cup chiefs. 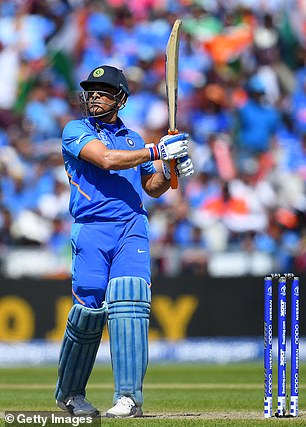 Hadi, 26, who wore a Harry Kane shirt and has tickets for two England matches, said: ‘We are at the team hotel because we want to see our England players. We saw Raheem Sterling and he waved at us. It is very special moment.

‘They do not know how much we love them. We all four have grown up in Kerala from childhood supporting England.’

But Anurag Kumar, 30, manager of the Royal Tandoor restaurant which adjoins the team hotel said: ‘I like Harry Kane, but the best sports captain there has ever been is MS Dhoni of India.

‘Cricket is my passion…I am not really keen on football.

‘But if Mr Kane and his team would like to come here, it will be an honour to welcome them.

‘I know that Indian food and curry are the most popular in England, so they probably like our food and may miss it so much and come in. But they are more likely to order a takeaway in case fans disturb them.’ 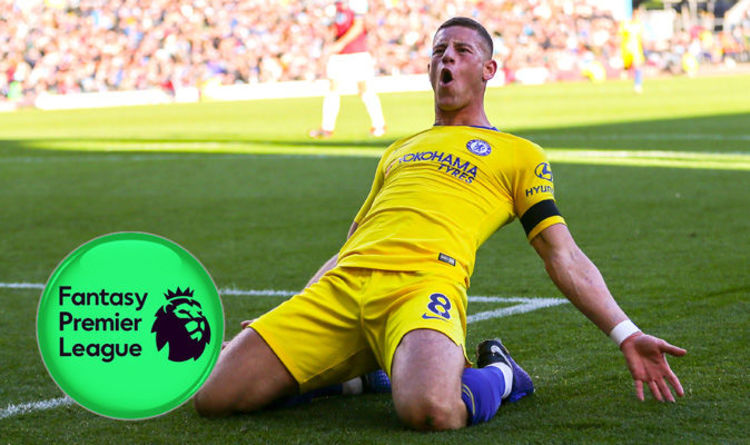 Fantasy Premier League in-form players are key to success, and there are plenty of bargain options among the hottest talents going into […] 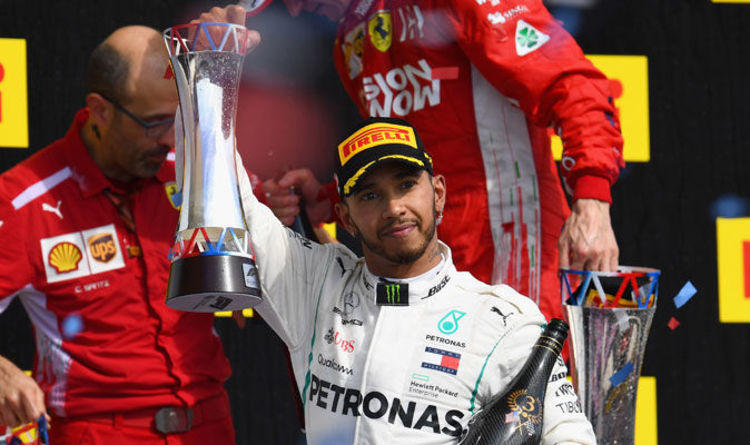 Hamilton, 33, missed out on winning his fifth world title as Raikkonen claimed his first race victory in over five years at […] 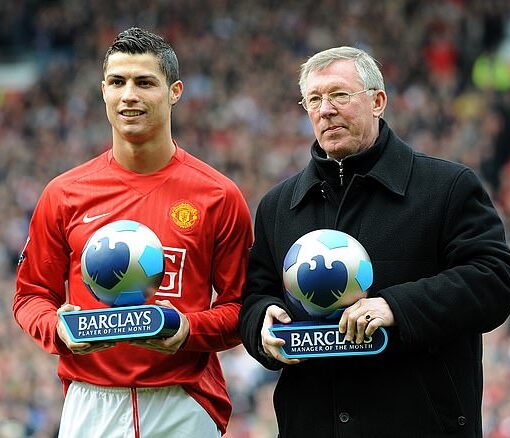