President Joe Biden was interrupted by three separate hecklers on Monday night at his final campaign rally ahead of the midterm election.

‘You’re a disgrace,’ one of them shouted at the president.

It’s unclear if Biden saw all of them. One was in the back of the gym where the rally took place and the crowd drowned out another one.

But the president did address one of them, telling the man wearing a large Uncle Sam top hat: ‘Don’t jump. You look crazy enough to jump.’

The three hecklers, all white males, were in different parts of the crowd seating at the event, and each took their turns shouting at the president. Rally officials rushed to each of them, escorting them out of the gym at Bowie State University.

The rally was Biden’s last pitch to voters to keep Democrats in control of Congress going into Tuesday’s midterm election.

In his closing arguments, the president repeated his plea he needs Democrats in Congress to keep his agenda going for the next two years.

His final pitch came as Republicans are predicted to win control of the House, where they’ve vowed to stymie Biden’s legislative agenda and investigate his administration.

Biden reminded voters he needs Democrats to codify Roe vs. Wade into law. And he repeated his warnings Republicans will cut Social Security and Medicare while raising taxes on wealthy.

He also repeated his argument the election is about choosing democracy.

‘Our lifetimes are going to be shaped by what happens,’ Biden the crowd at the historically black university in Bowie, Maryland, near Baltimore. ‘We know in our bones that our democracy is at risk and we know that this is your moment to defend it.’

First lady Jill Biden joined the president at the event, giving his a kiss before he made his remarks.

‘This is too important to sit out,’ Jill Biden told the crowd of the election. The first lady has spent the past few weeks pushing the get-out-the-vote message among Democratic worries their supporters won’t show up on Tuesday.

Arriving back at the White House after the rally, Biden said: ‘I think we´ll win the Senate. I think the House is tougher.’

Asked what the reality of governing will be like if Republicans win, he responded: ‘More difficult.’ 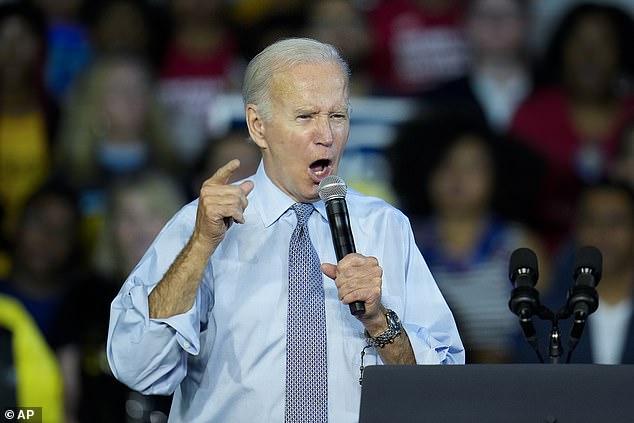 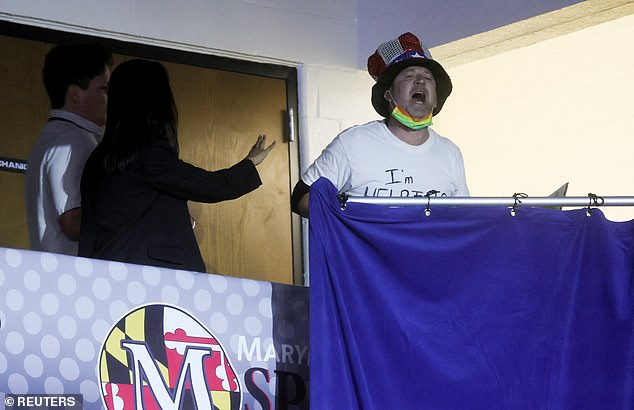 A man in an Uncle Sam top hat interrupted the president; Biden told him: ‘Don’t jump. You look crazy enough to jump.’ 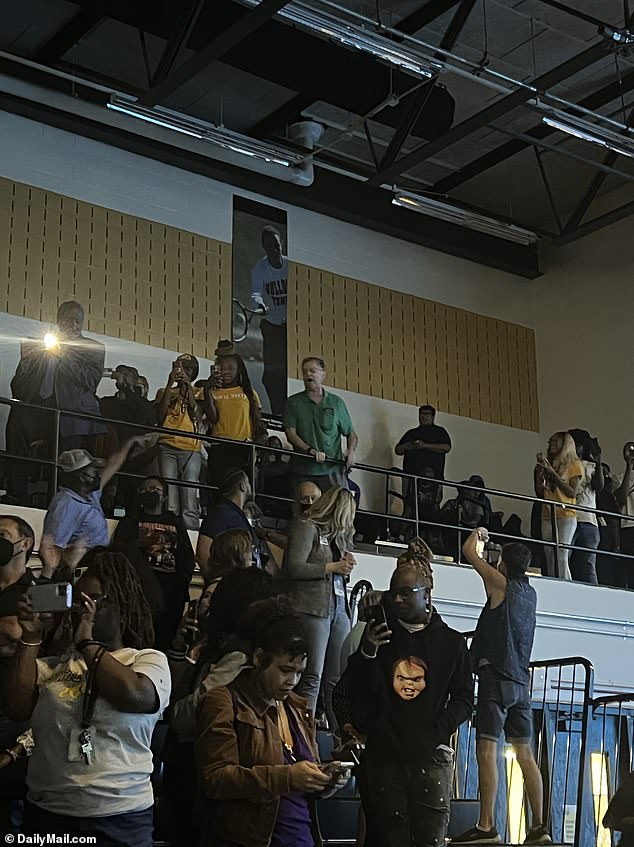 Another heckler yelled at Biden: ‘You’re a disgrace’ 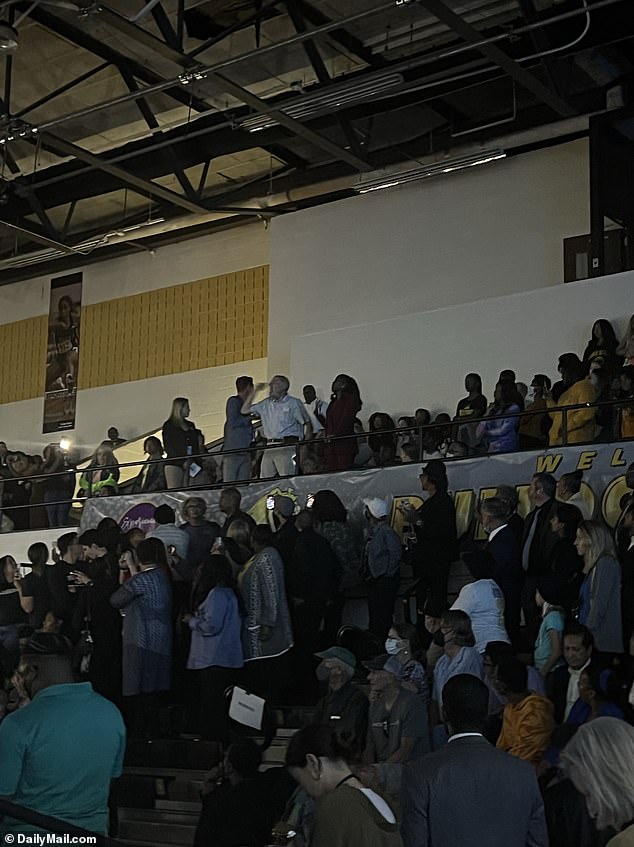 A third heckler was also removed 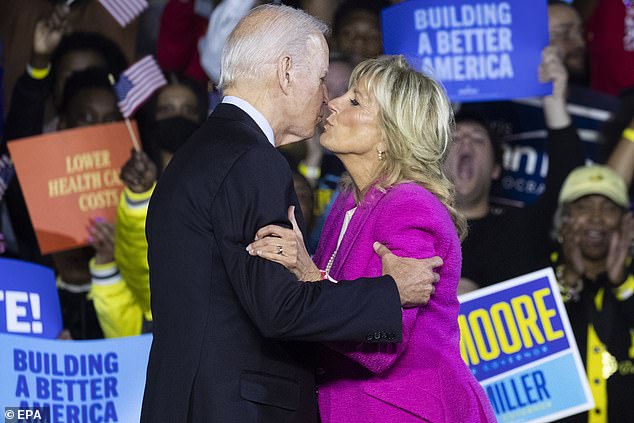 The first couple was together on Monday night in Bowie, Maryland, for the Democratic gubernatorial candidate Wes Moore. The day marks the two-year anniversary of when Biden won the White House.

Both of the day’s stop come in heavily blue areas amid signs Democrats are worried about turnout in Tuesday’s election. Biden won the state of Maryland by 34 points and the Virginia House district that the first lady visited backed the president by 19 points.

Election forecasters have Republicans winning the House of Representatives. The 50-50 Senate, where any one contest can tip the majority to either party, is seen as a closer contest. Many races, including Georgia, Pennsylvania, Nevada, Arizona and New Hampshire, are toss-ups.

President Biden spent the day at the White House where he did a virtual events fror the Democratic National Committee.

He kept an optimistic spirit: ‘We have a shot at keeping the Senate and increasing it and I’m optimistic about the House as well.’

And, as he has been doing these past few months, he painted Tuesday’s contest as a choice between democracy and autocracy. ‘We’re up against some of the darkest forces we’ve ever seen in our history. These MAGA Republicans are a different breed of cat. This is not your father’s Republican Party. It’s a different deal,’ he told Democrats on Monday afternoon. 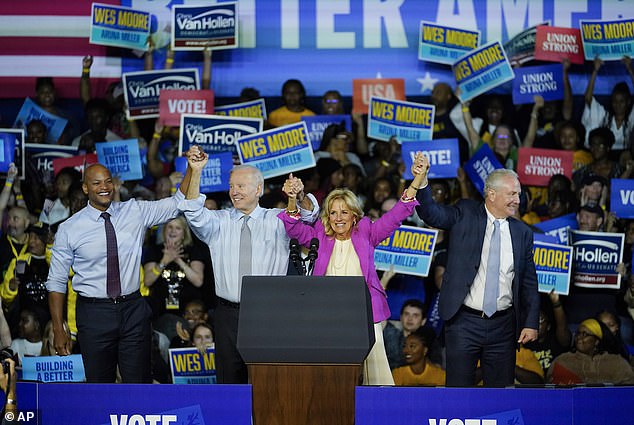 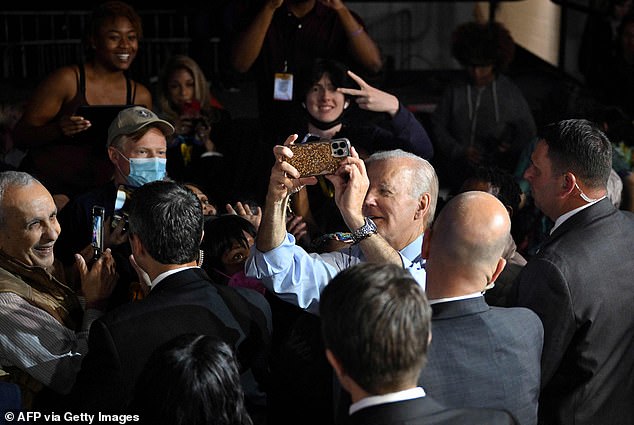 President Biden takes pictures with supporters after the rally 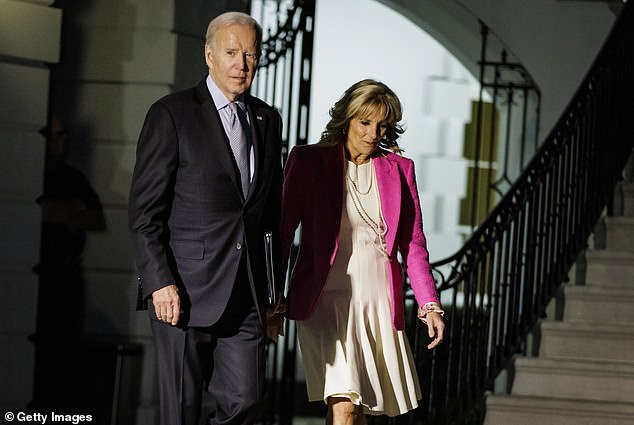 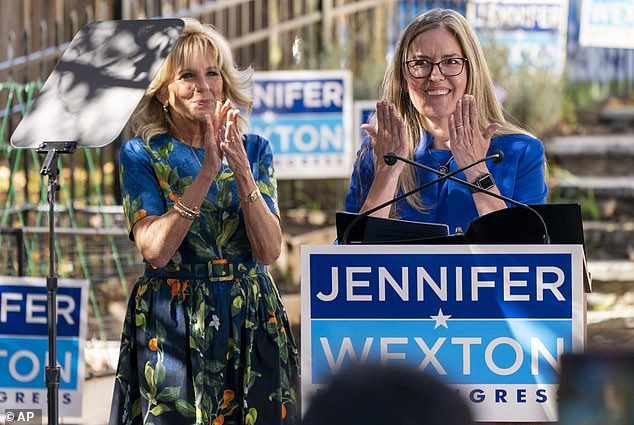 Republicans are looking to pick up at least three House seats in the state after Republican Glenn Youngkin was able to win the gubernatorial contest last year.

Democrats will be watching the results in Wexton and her fellow Reps. Elaine Luria and Abigail Spanberger’s races as a sign of how Tuesday night is going for the party.

In their Monday prediction based on poll averages, Real Clear Politics has the GOP picking up at least 15 in the House races to take their total to 227, with the Democrats winning 174.

Republicans only need to gain five seats to take control of the House.

Thirty-four races for Congress are still considered toss-ups but it is becoming clear that Republicans have the momentum, despite the Democrats making a small comeback in the closing stages.

President Biden is battling low approval ratings as voters express their frustration with the economy and the high cost of living.

Republicans have hammered Biden on the economy and blame Democrats for the crime rate – a message that appears to be resonating with voters. 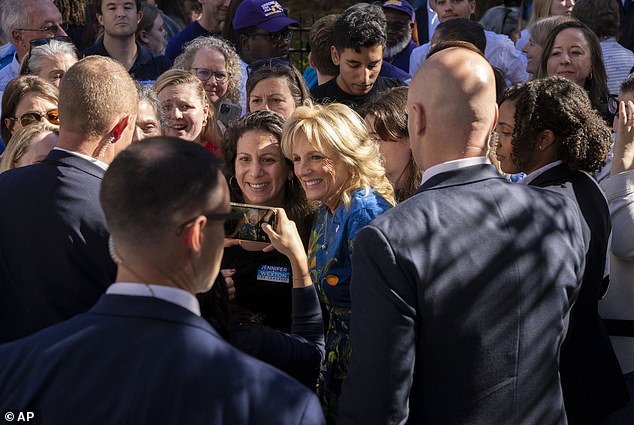 First lady Jill Biden takes pictures with supporters after speaking at an event for Rep. Jennifer Wexton in Virginia 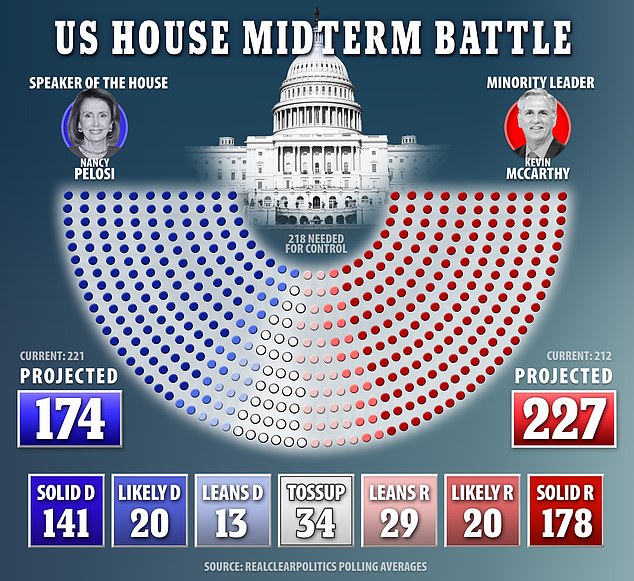 Thirty-four races for Congress are still considered toss-ups but it is becoming clear that Republicans have the momentum, despite the Democrats making a small comeback in the closing stages 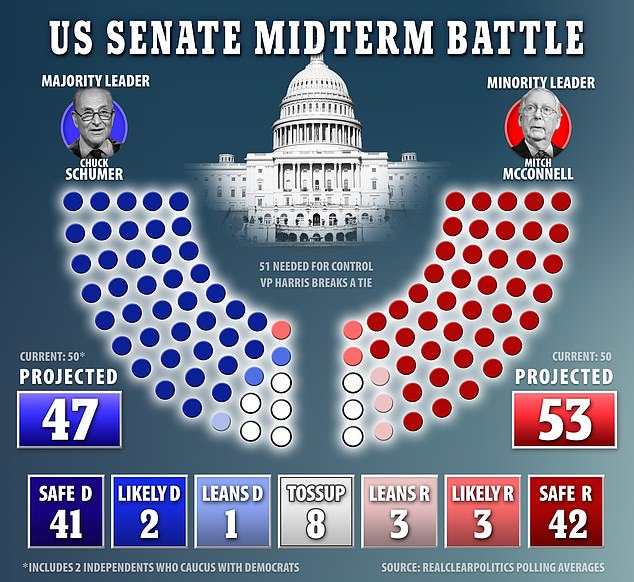 A final midterms poll projection shows Republicans with a grip on the majority in the House and picking up three seats in the Senate, with less than 24 hours until millions of Americans head to the polls

Biden, the first lady and other surrogates are painting the election as a choice between democracy and anarchy. They accuse Republicans of wanting to cut Social Security and Medicare, end abortion rights and give tax cuts to the rich.

‘There is a choice to make between two drastically different versions of our future,’ Jill Biden said Monday in Virginia.

‘Extremists are putting Social Security and Medicare on the chopping block. A Republican majority will attack women’s rights and healthcare,’ she said.

Meanwhile, House GOP Leader Kevin McCarthy, who will be the next speaker if Republicans win the House, told CNN that the party’s first acts in power will be to secure the border, cut back on government spending and launch rigorous investigations into the Biden administration.

When will result of midterms be in? It could take just hours or almost a MONTH for control of Congress to be known… but beware of red and blue ‘mirage states’ that appear decided before they really are

Though Election Day is just days away, it may take Americans up to a month to know which party will be in control of the United States Congress,

All 435 seats in the U.S. House of Representatives are up for grabs on Tuesday, as are 35 U.S. Senate seats and 36 governorships.

Republicans would need to pick up five seats to take a majority in the House and just one to control the Senate. Nonpartisan election forecasters and polls suggest Republicans have a very strong chance of winning a House majority, with control of the Senate likely to be closer fought as voters say they are most concerned about the economy.

A massive wave of Republican support could lead to declarations of victory hours after polls close.

But with dozens of races expected to be close and key states like Pennsylvania already warning it could take days to count every ballot, experts say there’s a good chance Americans go to bed on election night without knowing who won.

‘When it comes to knowing the results, we should move away from talking about Election Day and think instead about election week,’ said Nathan Gonzales, who publishes the nonpartisan newsletter Inside Elections. 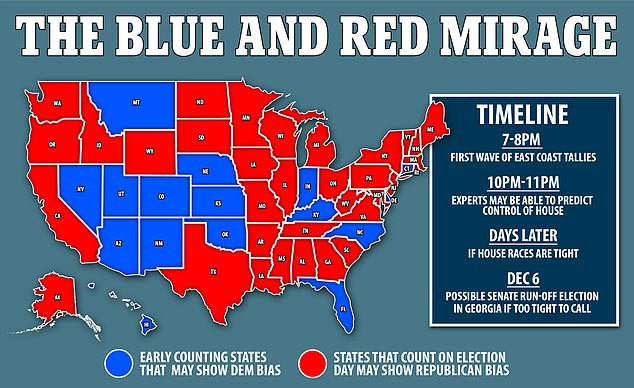 The earliest vote tallies will be skewed by how quickly states count mail-in ballots, with some states reporting mail-in ballots results earlier, which could make it seem like Democrats have the lead in the state

The earliest vote tallies will be skewed by how quickly states count mail-in ballots.

Because Democrats vote by mail more often than Republicans, states that let officials get an early jump on counting mail ballots could report big Democratic leads early on that evaporate as vote counters work through piles of Republican-leaning ballots that were cast on election day.

In these ‘blue mirage’ states — like Florida and North Carolina — election officials are allowed to remove mail ballots from their envelopes before Election Day and load them in vote counting machines, allowing for speedy counting.

But states like Pennsylvania and Wisconsin don’t allow officials to open the envelopes until Election Day, leading to a possible ‘red mirage’ in which Republican-leaning Election Day ballots are reported earlier, with many Democratic-leaning mail ballots counted later.

Experts like Joe Lenski, co-founder of Edison Research, which will be tracking hundreds of races on November 8 said he will keep an eye on the mix of different types of ballots each state is counting throughout the night.

‘Blue mirage, red mirage, whatever. You just have to look at what types of votes are getting reported to know where you are in that state,’ said Lenski.

So when will we know when the races are won?

The first wave of vote tallies are expected on the East Coast between 7pm and 8pm ET. An early indication of Republican success could come if the races expected to be close — like Virginia’s 7th congressional district (where Republican Liz Cheney has put her support behind a Democratic candidate) or a contentious U.S. Senate seat in North Carolina — turn out to be Democratic routs.

By around 10pm or 11pm EST, when polls in the Midwest will be closed for an hour or more, it’s possible Republicans will have enough momentum for experts at U.S. media organizations to project control of the House, said Kyle Kondik, a political analyst at the University of Virginia’s Center for Politics.

If the fight for the House still looks close as vote tallies start coming in from the West Coast — where there could be more than a dozen tight House races — it could be days before control of the chamber is known, experts said.

California typically takes weeks to count all its ballots, in part because it counts ballots postmarked by Election Day even if they arrive days afterward. Nevada and Washington state also allow late ballots if postmarked by November 8, slowing down the march to final results.

‘If the House is really on the edge, that would matter,’ said Kondik.

It may take longer, perhaps weeks longer, to know which party will control the Senate, with close contests in Pennsylvania, Arizona and Georgia likely to determine final control.

And iIf Georgia’s Senate race is as close as expected and no candidate receives more than 50 percent of the vote, a run-off election would be scheduled for December 6, possibly leaving control of the chamber in limbo until then. 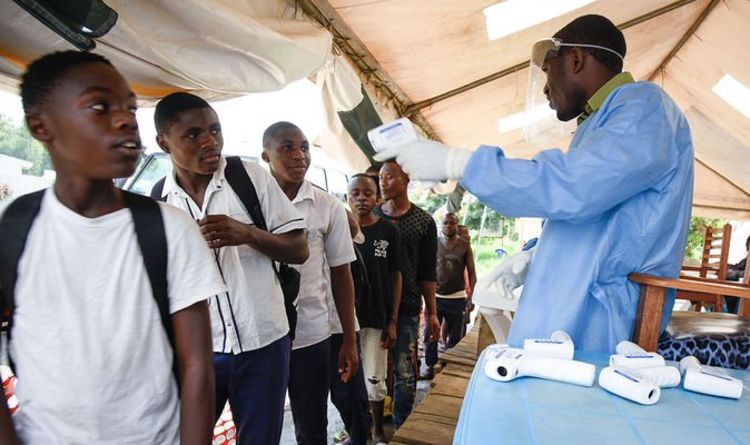 Medics have repeatedly come under attack from armed militiamen who reportedly believe Ebola is a conspiracy against them. The health workers, who […] 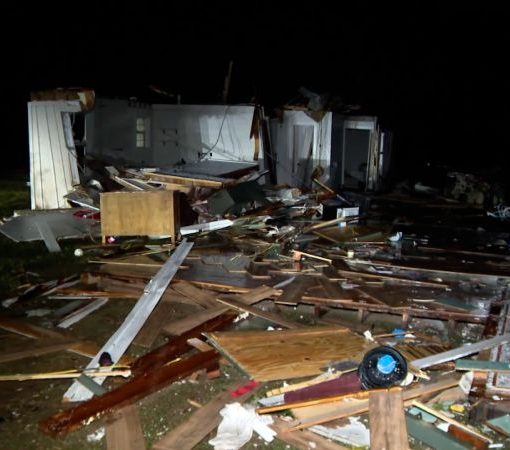 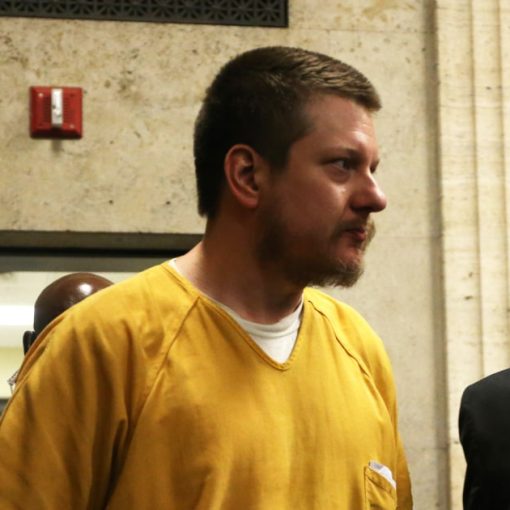 The former Chicago police officer who was convicted in the 2014 killing of a Black teenager was released from prison Thursday, less […]