The world came to know her and her curves when she catapulted to reality fame years ago.

But lately Kim Kardashian has been displaying a significantly more slimmed down figure.

In her most recent outing where she displayed her svelte physique, the shapeshifter, 42, looked trimmer than ever in a fitted PVS dress that cinched into her narrow waist as she attended the CFDA Awards. 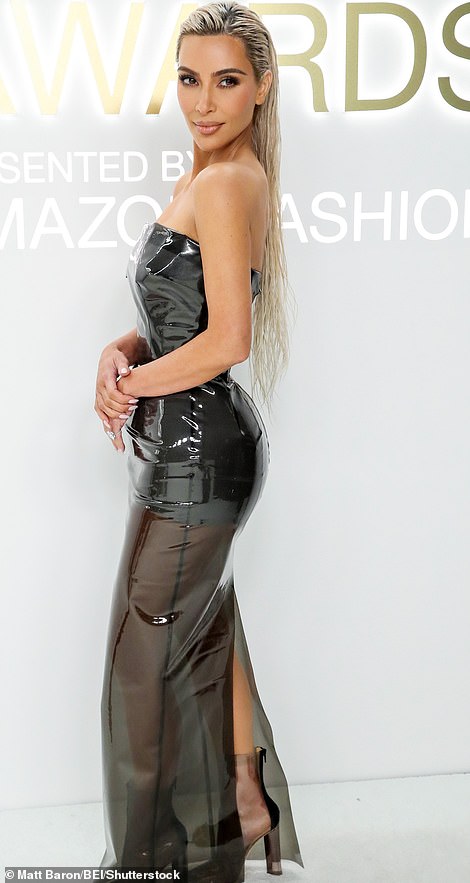 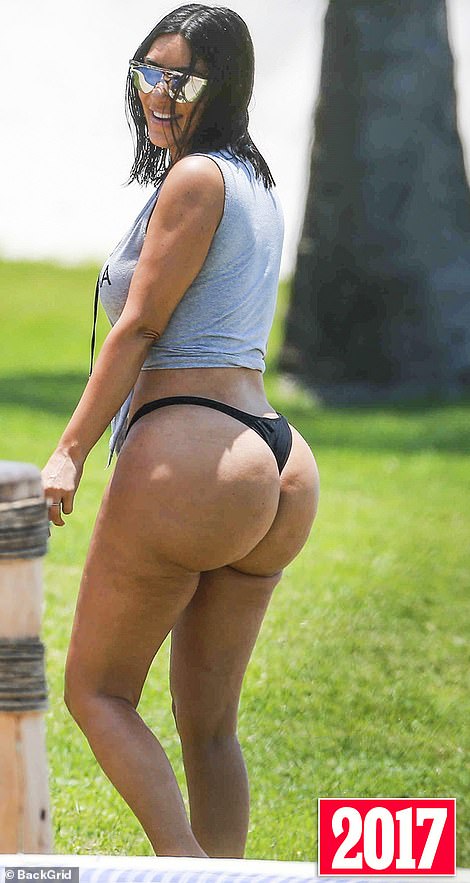 In shapeshifting mode! Kim Kardashian displayed her dramatically slimmed down physique at the CFDA Awards on Monday (left). She is pictured right in Mexico in 2017

She wowed in sleeveless black bustier style gown that put all the results of her training on display.

Kim has been putting herself through the paces in order to lose weight this past year.

The mother-of-four first shed 16lbs in just three weeks so that she could squeeze into Marilyn Monroe’s famous gown for the 2022 Met Gala, but the beauty has continued on with the weight loss ever since then, getting rid of five more pounds.

In her quest to fit into the iconic dress, Kim adhered to a strict diet and eve wore sauna suits to drop the pounds.

Fans were given a glimpse into her grueling weight loss journey on a recent episode of The Kardashians.

‘I have about three weeks to fit into this dress. I’m going to do every last thing that I can to try and make this happen,’ Kim says in confession.

She’s even slimmer! On Monday night, Kim looked even smaller than she did at the Met Gala in May (right) . She went on an extreme diet before the Met to fit into Marilyn Monroe’s dress, dropping 16lbs in just three weeks

She’s seen working out with a trainer, adding in confession she will have to eat ‘so clean’ and also cut out sugar which is, ‘so hard’ for her.

As Kim attempted to obtain the iconic ‘Happy Birthday Mr. President’ dress, she claimed she was a ‘shape shifter’ who could ‘squeeze into anything’.

‘The width of my shoulders and of my body makes me like a shapeshifter,’ she explained as she prepared to try on a replica of the dress. ‘I can squeeze into anything!’

The world first got to know Kim as a young woman who loved showing off her curves on reality television.

In 2009, Kim proudly showed off a fuller frame as she sported a chocolate brown snakeskin pattern bikini while putting her ample cleavage and shapely waist on display. 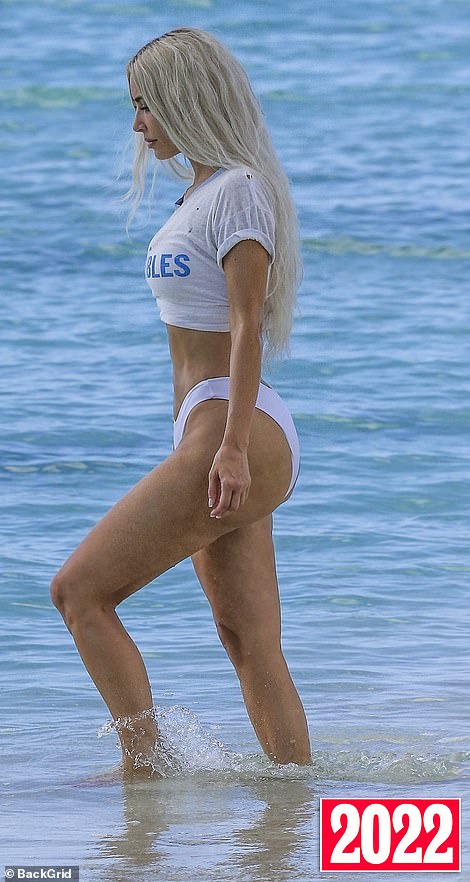 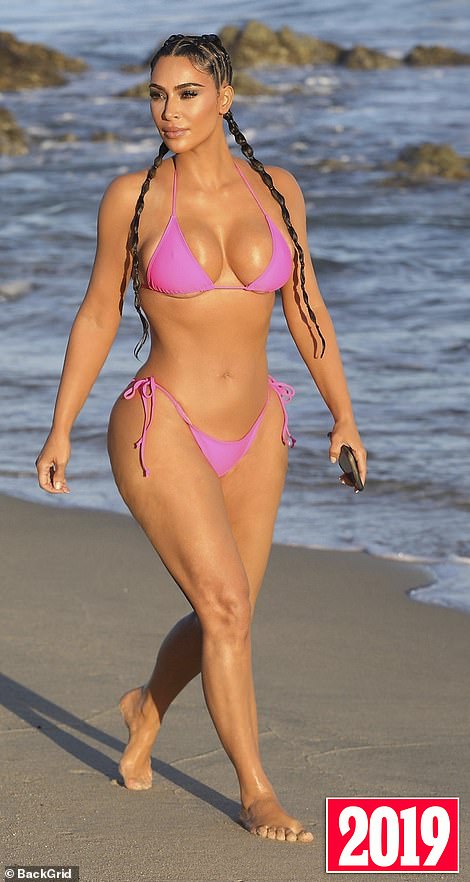 Body evolution: Kim is famous for her perfect hourglass curves and impossibly round behind, but the beauty has had a transformation over the years and recently started displaying a more svelte figure (Pictured left in 2022, and right in 2019)

She rocked an even curvier frame in 2013 while sporting a skimpy white bikini that showed off her ample buttocks.

Later that same year Kim was pregnant with her first child, North, nine – whom she shares with West, 45 – and displayed her baby bump in a grey snakeskin bikini and matching coverup.

In 2015 she was pregnant with her second child, son Saint, six, and showed off her very impressive round curves in a gold bikini.

In 2016 she was seen enjoying a poolside family day while on vacation in Puerto Vallarta, Mexico, where she wore a nude bikini that highlighted her sizable behind.

No implants: In 2017 and 2016, she was seen enjoying poolside fun on trips to Mexico, where she wore bikinis that highlighted her sizable behind, which she has always insisted did not have implants in it

Meanwhile in 2017 she showed off her curvy figure in a stylish monogrammed Dior bikini, with her backside looking rounder than ever.

Kim has always denied getting butt implants and event went as far as getting an X-ray on her behind during an episode of her older reality TV series of Keeping Up With The Kardashians.

The star attempted to dispel the rumors on season 6 of the series, with a doctor assuring fans that there was no implant in her buttocks.

Though she’s always claimed that her famous behind is natural, Kim has not denied having a fat transfer from another area to achieve her perfect hourglass shape.

Two years prior in 2017 she sent temperatures soaring as she donned black thong bikini bottoms that showed off her robust derrière during a vacation in Mexico. 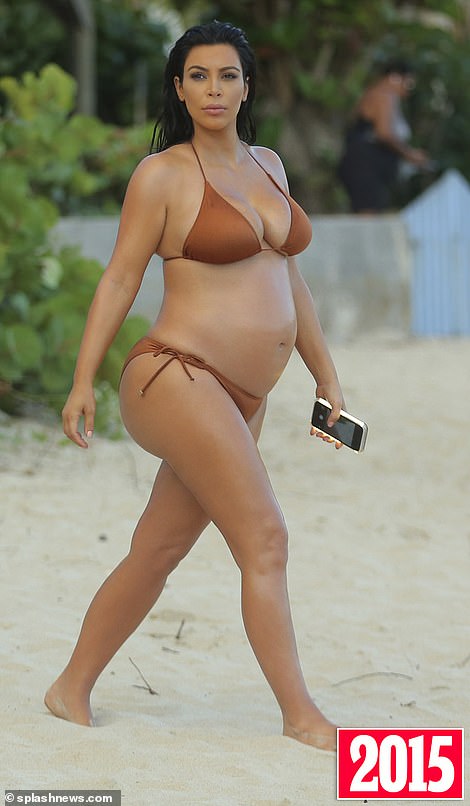 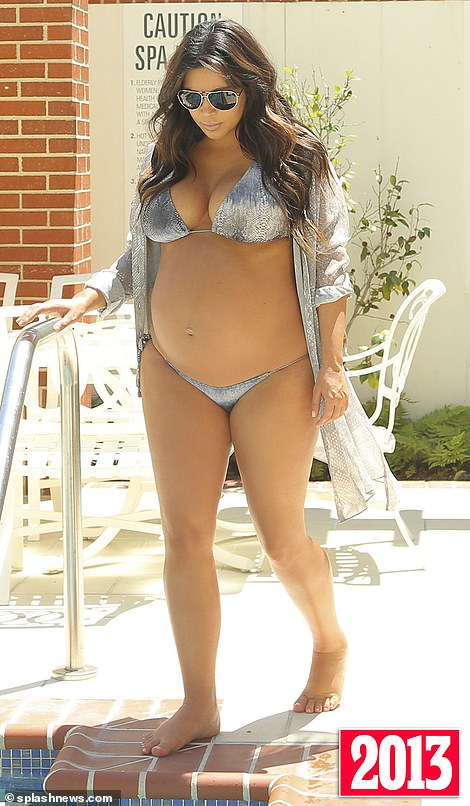 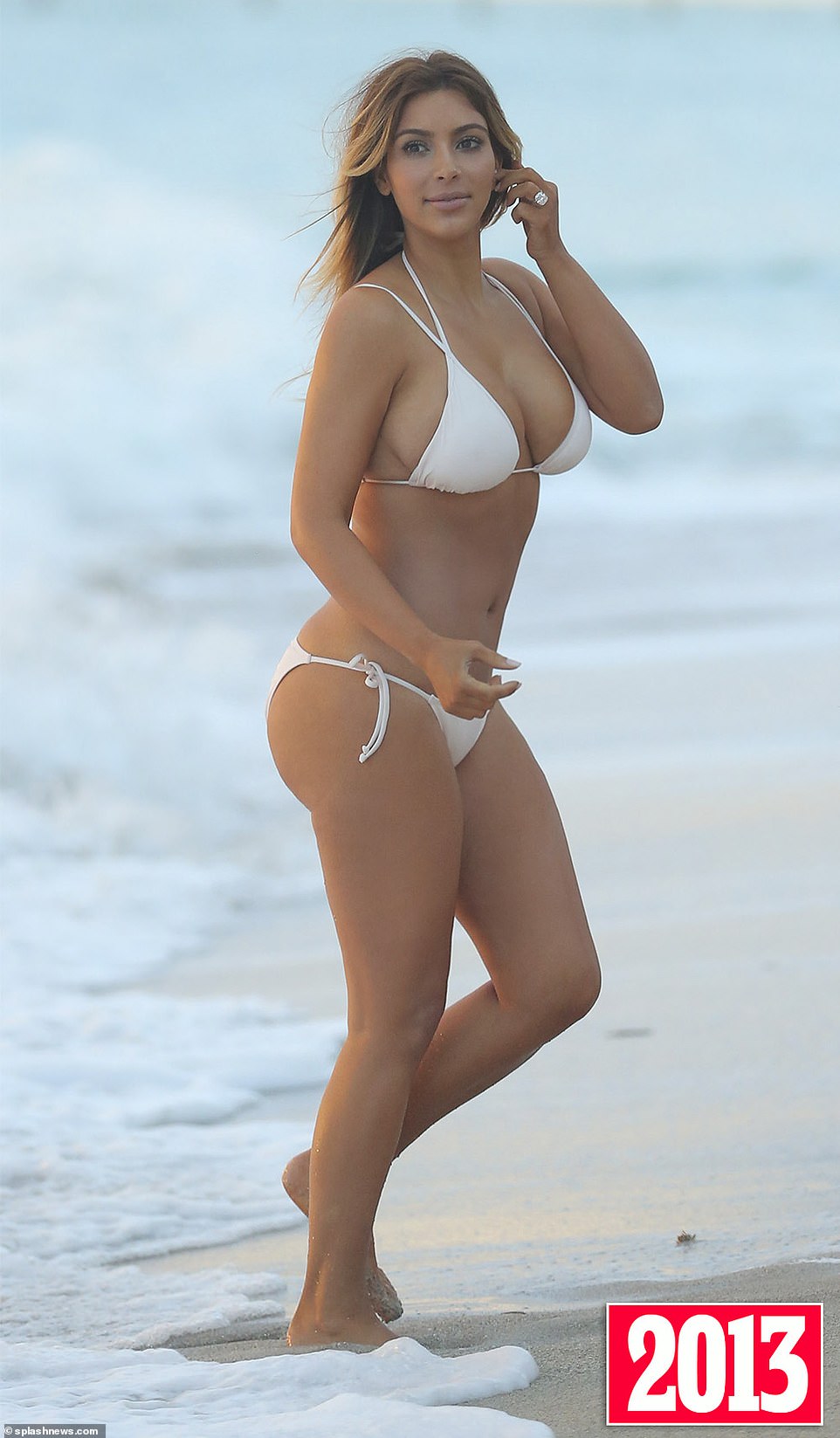 Body after baby: Kim bounced back quickly after giving birth to North and was back in a bikini six months later in late 2013

In her recent August cover story for Allure, Kim admitted to taking drastic measures to slim down and shared that her crash diet ahead of the 2022 Met Gala came at a steep price.

The star – who usually eats a plant-based diet – revealed that because she had been consuming meat in her effort to quickly slim down, her body had a psoriasis flare up that led to psoriatic arthritis.

‘Psoriasis broke out over my body and I got psoriatic arthritis so I couldn’t really move my hands,’ she said, adding, ‘I was freaking out.’

Despite suffering from the painful condition, Kim recently defended her diet and remarked that she didn’t do ‘anything unhealthy’ as she compared her weight loss to that of Christian Bale’s extreme weight loss for his role in The Machinist. 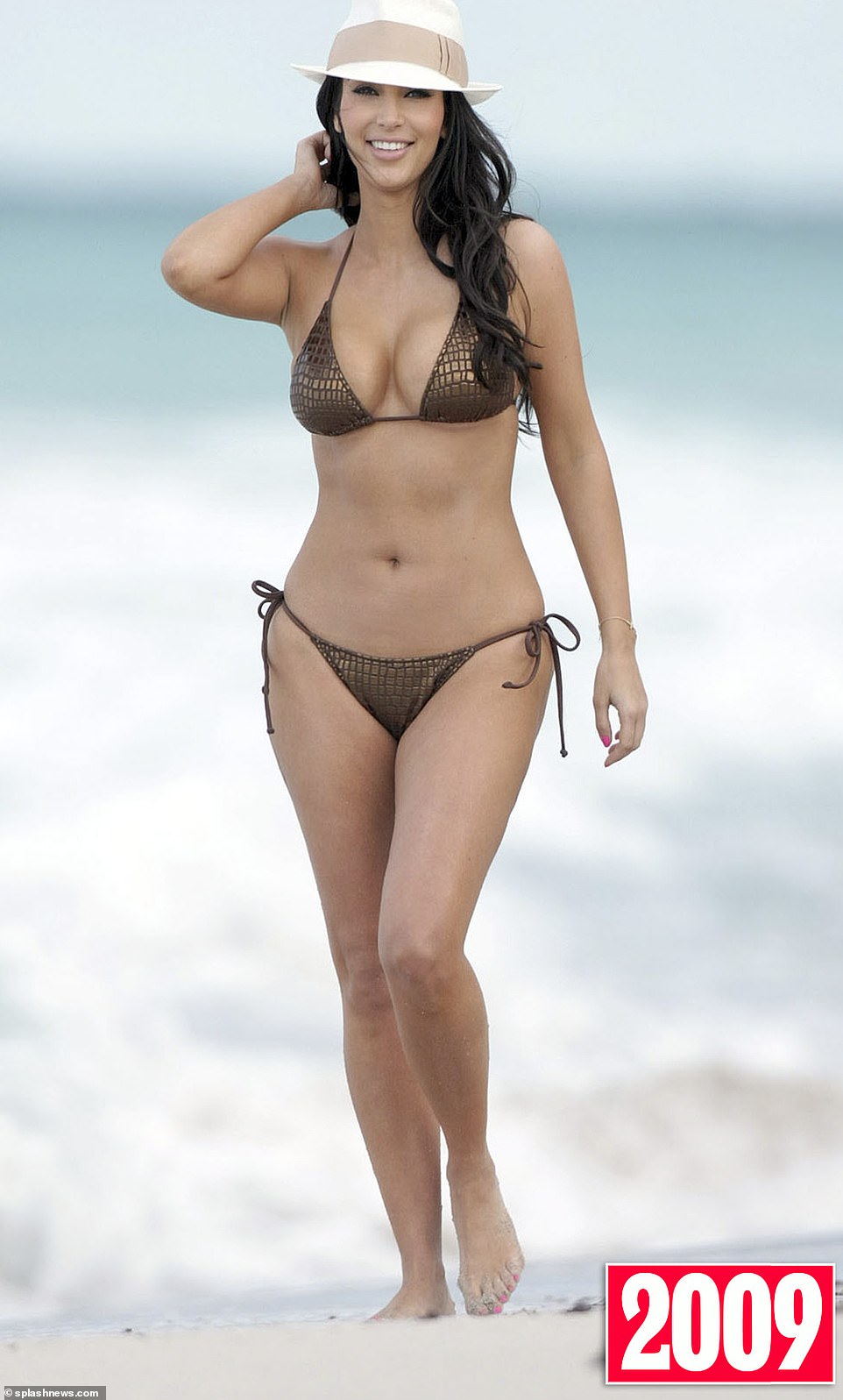 Flashback! In 2009, Kim proudly showed off her bikini body in a chocolate brown snakeskin pattern swimsuit

Elsewhere in the interview she revealed that she has never had fillers but admitted to having Botox in her forehead.

Kim insisted that she currently doesn’t have any filler in her lips or cheeks, before adding: ‘Never filled either one, ever.

She also opened up about accepting her imperfections, saying that although she still ‘strives’ to be perfect, she is at peace with herself.

The star then candidly revealed that she ‘hates’ her hands: ‘I’m at peace with not being perfect and I wasn’t like that before, I hate my hands — they’re wrinkly and gross.’

Jeopardy! producer Mike Richards tried to keep a low profile while spotted out for the first time since quitting his hosting gig […] 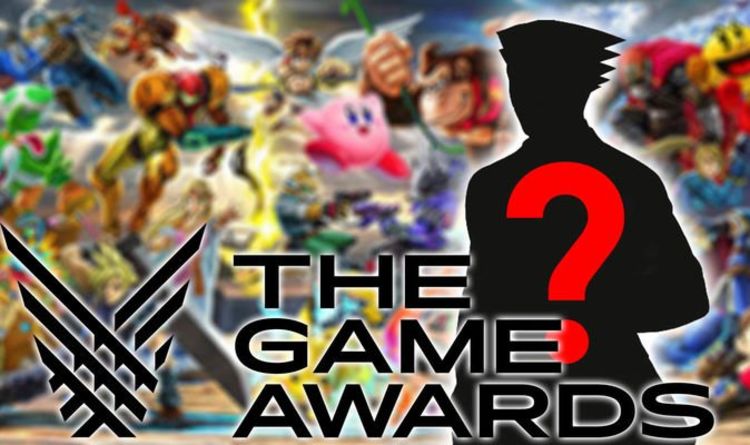 As reported on in a post by Game Rant, an alleged leak on 4chan may have revealed Phoenix Wright as the next […] 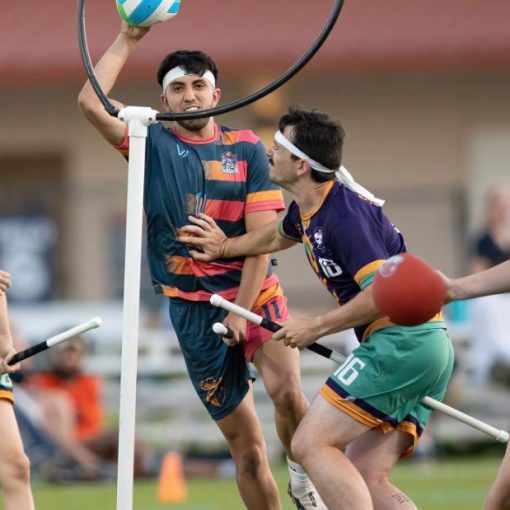 US Quadball and Major League Quadball, the sports’ two governing bodies in North America, both announced the new name of “quadball” this […] 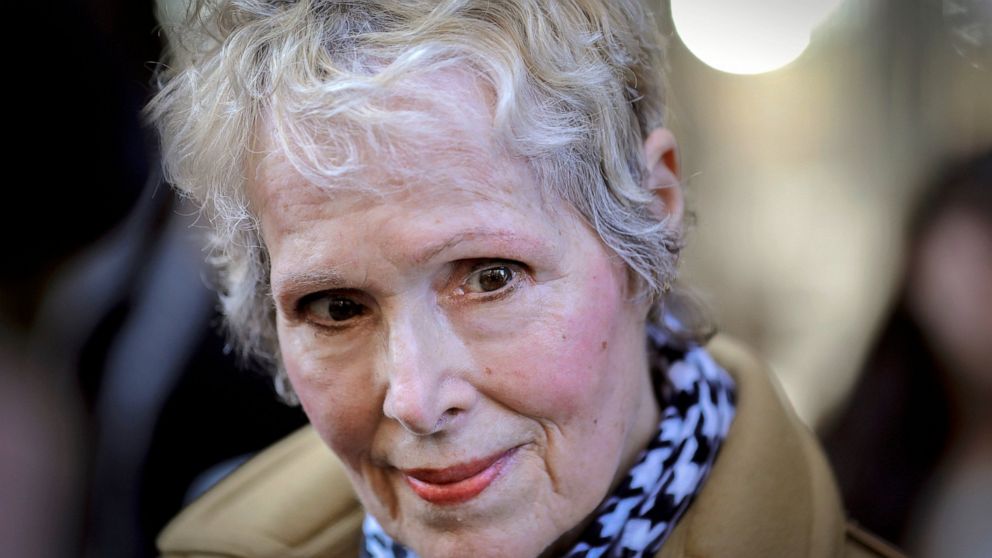