Hospitals have been told to serve up fewer chips in a crackdown on the dreary meals patients have complained about for decades.

The biggest ever overhaul of internal catering will also see patients given food on proper plates as part of green drive to stamp out single-use plastic.

It comes in the wake of a review of hospital food by cook and Great British Bake Off judge Dame Prue Leith two years ago, who called on the NHS to make healthier and better quality meals, let patients order food around the clock straight to their bed and serve up dishes on china.

Experts welcomed the NHS’s new standards, which are legally binding, labelling it a ‘great step forward’ in killing the ‘hotel service’ which sees meals delivered at the ‘lowest cost’.

But they warned options on offer must taste good because a ‘healthy meal that is not eaten doesn’t really benefit anyone’. Hospitals have been ordered to serve up fewer chips in a huge crackdown on dreary meals patients have complained about for decades. NHS bosses in England have also demanded trusts offer hot food 24/7 and let patients choose their dinner from bed, as well as cooking more vegetable and fish dishes A gravely-ill pneumonia patient has shared his shock at being servce ‘three stone-cold fish fingers’ in hospital — that even left staff ‘laughing in disbelief’.

Daniel McGuire was rushed to Royal Preston Hospital, in Lancashire, in August after suffering pneumonia and sepsis. He says doctors told him he could have died.

While in a respiratory ward, the 32-year-old said he was served ‘three fish fingers’ for dinner one night.

On separate occasion, he received dirty cutlery and half of two meals after the hospital ‘ran out of food’. Another patient was given ‘just rice’, he claims.

Despite being told by doctors to gain weight, Mr McGuire, who is unemployed, left hospital three stone lighter and blames the hospital’s ‘disgusting’ meals.

Mr McGuire said: ‘There was one night I was waiting for my tea. The guy brought it over and he was laughing.

‘He said “I’m sorry but this is your tea”. There were just three fish fingers stone-cold on the plate.

‘I think he was in disbelief himself. He didn’t really know what to say to me.

‘There’d been a mess up with the menu. They’d either lost the menus or whatever. They’d basically run out of food.

He added: ‘I’d been given dirty cutlery with someone else’s custard still on the spoons.

‘I complained there and then about the dirty cutlery and got told “oh well it happens”. I think that was one of the assistants that fill up your water and that sort of stuff.

‘[My partner] Sarah [Howden, 35] ended up smuggling me something in, otherwise I would have ended up not eating all day.

‘Someone got just rice [on one occasion].’

Mr McGuire said he had lost 1 stone (6kg) by the time he was out of intensive care and two to three stones (12 to 18kg) by the end of his hospital stay.

He said: ‘The doctor kept telling me I had to eat to keep my weight up and get better.

‘I’ve got to be careful because there’s a lot of people who love the NHS and I still receive treatment from the hospital, but I’m passed that point in caring now.

‘There’s no point putting in a complaint. It’ll fall on deaf ears.’

A Lancashire Teaching Hospitals spokesperson said: ‘The Trust produces around 80,000 meals per month with inpatients able to select a wholesome meal from a menu in advance, and we take hygiene standards very seriously.

‘The system works well for the vast majority of the time and most patients receive the meal they have ordered. Occasionally there is mix up in the order due to a lack of communication between the ward and the catering team, as was the case here. We understand that this was resolved locally at the time.

‘Where a patient feels that their concern has not been dealt with, we would always encourage them to contact our Patient Experience and PALS team to investigate and identify any future learning.’ 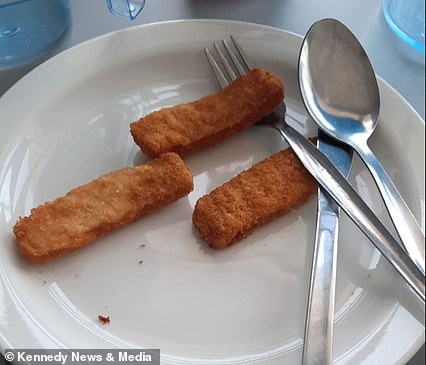 The new NHS national standards for food and drink, an update on ones set out almost a decade ago, set out that all trusts should view ‘food as medicine’ and that managers should be ‘held accountable’ for the food served in their organisation.

It noted that ‘many’ hospitals already provide ‘high quality food and drink’ to their patients, staff and visitors ‘but the variation across the country is still too great’.

‘Not enough healthy options are consistently available, sustainability is poorly embedded and too much food is wasted,’ the report states.

Hospitals, which will be monitored to ensure they comply with the food rules, must offer food around the clock, which is ‘appropriate for their demographic’.

Staff should also have access to ‘healthy, balanced, hot and cold food options 24/7’.

Bosses said hospitals should offer fewer processed foods that are high in sugar, salt and fats. These could include biscuits, cake and ice cream, as well as lasagne and garlic bread, fish and chips and sausage and mash — all of which are on offer at hospitals.

They should also offer a ‘wider variety of protein sources’, such as beans, pulses, buts and soya — rather than just meat.

Patients and staff should also have access to a selection of ‘seasonal, locally sourced fruit and vegetables’.

Trusts should also ‘consider subsidising the cost’ to encourage staff to workers to make healthier choices, the document states.

Every hospital must ‘implement a digital meal ordering system’ with patients shown food that is safe and suitable for their diet, such as nut-free or vegan options.

This will see patients order food from ‘bedside monitors’ or have a catering assistant visit them and take their order.

NHS trusts will also have to appoint a food nutrition and safety board director who ensures these rules are met, create a food and drink strategy and consider advice from a dietician to ensure their menus are appropriate.

The standards apply to all food served by NHS bodies, including to patients, staff and visitors.

Bosses should ‘support food heroes’ and ‘celebrate’ tasty and nutritious food made by their chefs and kitchen staff.

The report comes off the back of Dame Prue’s blueprint for better hospital food, released in October 2020. She said all hospitals should have digital meal ordering by 2022, serve meals on china and ‘go green’ to slash the 14million kg of wasted meals thrown out by the NHS every year.

The review was commissioned by ex-Prime Minister Boris Johnson in August 2019 after six patients died from listeria which they contracted from hospital sandwiches and salads.

Professor Gunter Kuhnle, an expert in nutrition at the University of Reading, told MailOnline that high quality and healthy hospital food is vital — but they must be tasty and well presented, as a ‘healthy meal that is not eaten doesn’t really benefit anyone’.

Dr Duane Mellor, a dietitian from Aston Medical School in Birmingham, told MailOnline that the rules are a ‘great step forward’.

He said they should support the NHS manage the ‘challenging task’ of hospital food — which needs to support patients with complex needs, such as those with malnourishment, requiring a modified texture diet or culturally appropriate options.

‘It is vital that food service is seen as a core part of holistic health care and not just a hotel service do be delivered at the lowest cost,’ he said.

But he warned the programme will need ‘considerable’ financial and resource investment.

Dr Mellor said he hopes that ‘finally’ the appropriate investment will be made, such as by NHS Trusts providing food service dietitians to ‘meet the different nutrition and hydration needs of patients, staff and visitors’.

‘[This] will ultimately improve patient care and experience and save money — with respect to both food waste and ultimately length people are in hospital — as better nutrition and hydration is known to improve many health outcomes.’

The NHS serves 140million meals to patients every year, and has a further 1.2million members of staff who require food and drink on shift.

However, four in ten hospital staff have previously said that catering facilities in their workplaces are poor.

It was revealed in 2019 that around a fifth of hot meals served at NHS hospitals were made at one factory in Wiltshire, owned by private firm Apetito, which were then being shipped as far as 650 miles away.

Despite the new food standards, a 32-year-old pneumonia patient today told of the ‘disgusting’ food he was served during a month-long stint in hospital in August.

Daniel McGuire, who is unemployed, was rushed to Royal Preston Hospital, in Lancashire, in August after suffering pneumonia and sepsis.

His dinners included ‘three fish fingers’ one night and half a curry and half a hotpot on one occasion, when the hospital ‘ran out of food’. Mr McGuire said another patient was given ‘just rice’.

On separate occasion, he received dirty cutlery and half of two meals after the hospital ‘ran out of food’. Another patient was given ‘just rice’, he claims.

Mr McGuire said hospital staff were left ‘laughing in disbelief’ at the state of his dinner and that he was also given ‘used cutlery’.

He left hospital two to three stone lighter than when he was admitted, despite being told by doctors he needed to put on weight.

A Lancashire Teaching Hospitals spokesperson said it serves a ‘wholesome meal’ that patients choose from in advance and takes hygiene standards ‘very seriously’.

Philip Shelley, chair of the NHS Food Review said: ‘Good food plays a vital role in promoting health and powering recovery for patients, and is equally important for our hardworking staff too.

‘Our new hospital food standards come at minimal cost and clamp down on unnecessary food waste – a win-win for patients, visitors and staff, and taxpayers too.’

Pictures of the WORST food served up on Britain’s wards

Food standards published this week set out that the health service must offer healthy and warm food around the clock.

But mealtimes on NHS wards sometimes fall short of these standards. Patients have told of receiving cold dinners, pasta so dry it was inedible and ‘tiny’ portions. Daniel McGuire, 32, (pictured right with his partner Sarah Howden, 35), spent one month in Royal Preston Hospital, in Lancashire, after suffering pneumonia and sepsis. He has told how his dinners included ‘three fish fingers’ (left) when the hospital ‘ran out of food’ 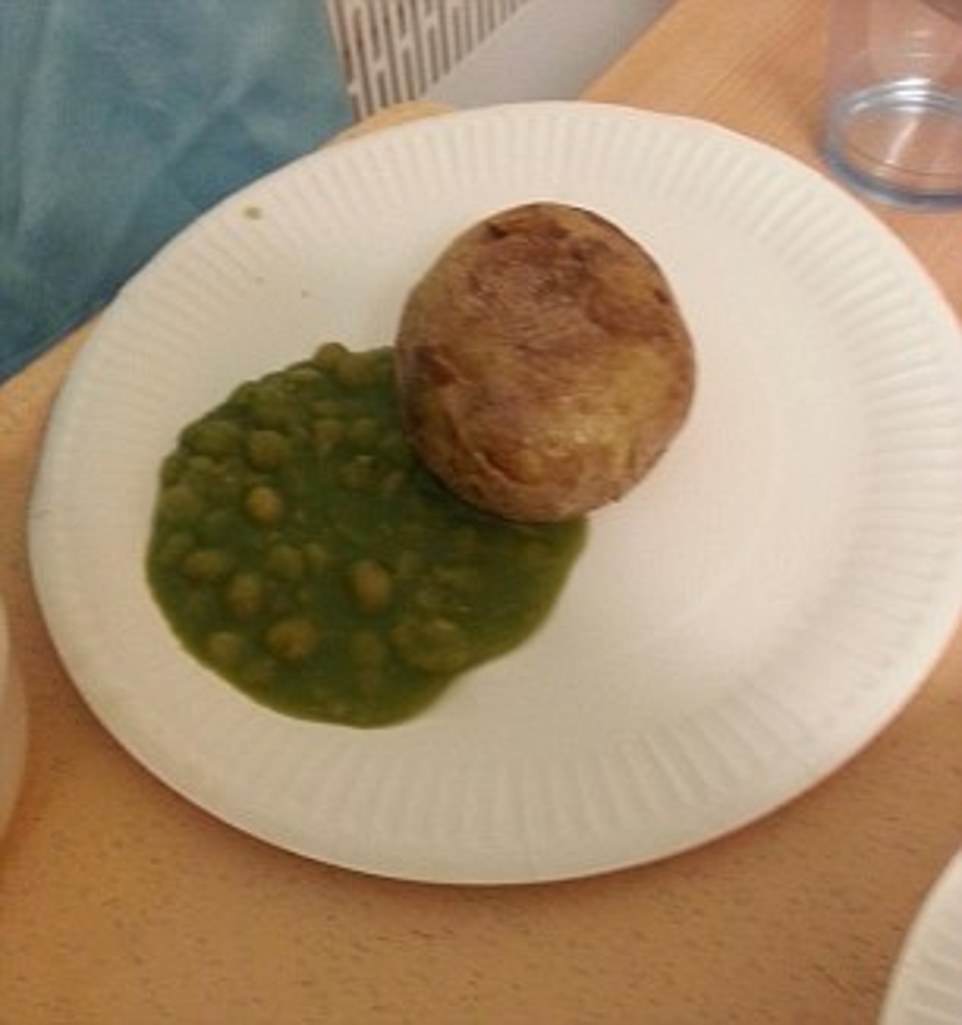 A patient in Abergavenny, east Wales, complained about their potato and mushy peas, which they said was cold 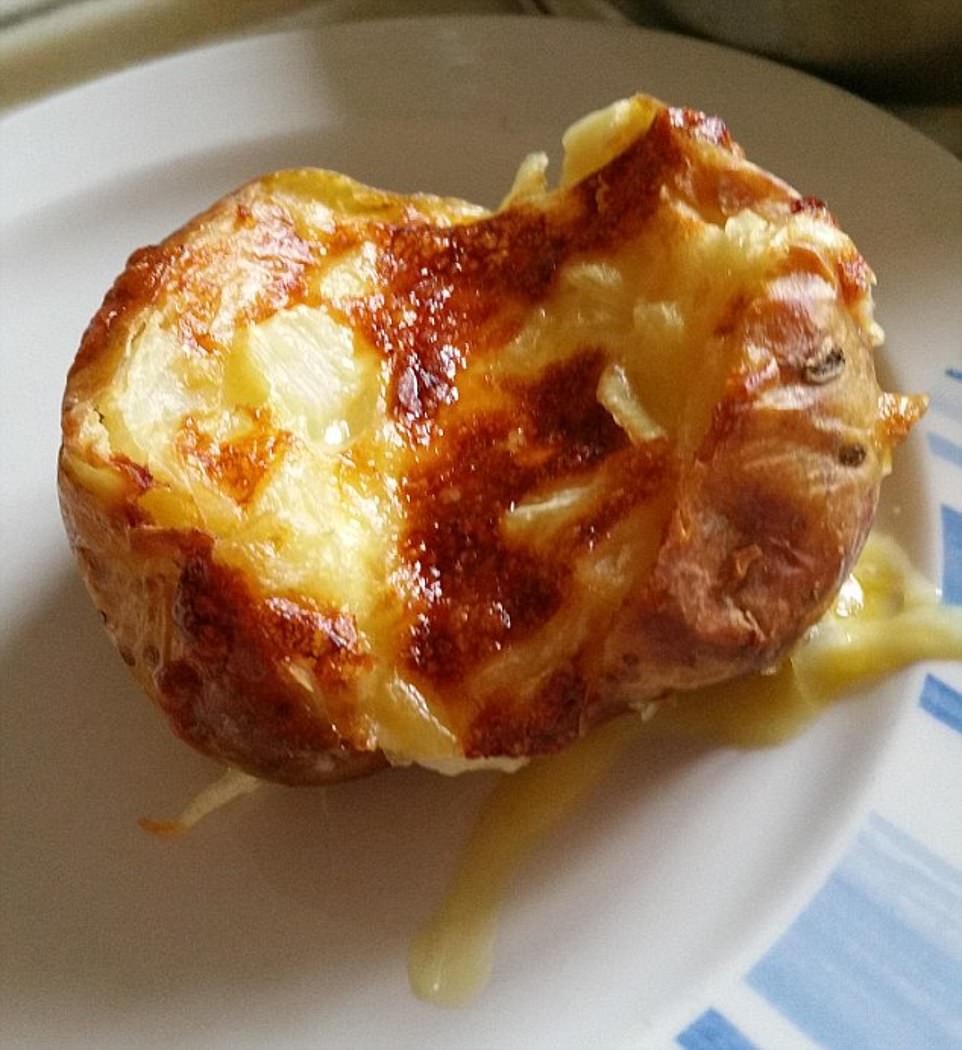 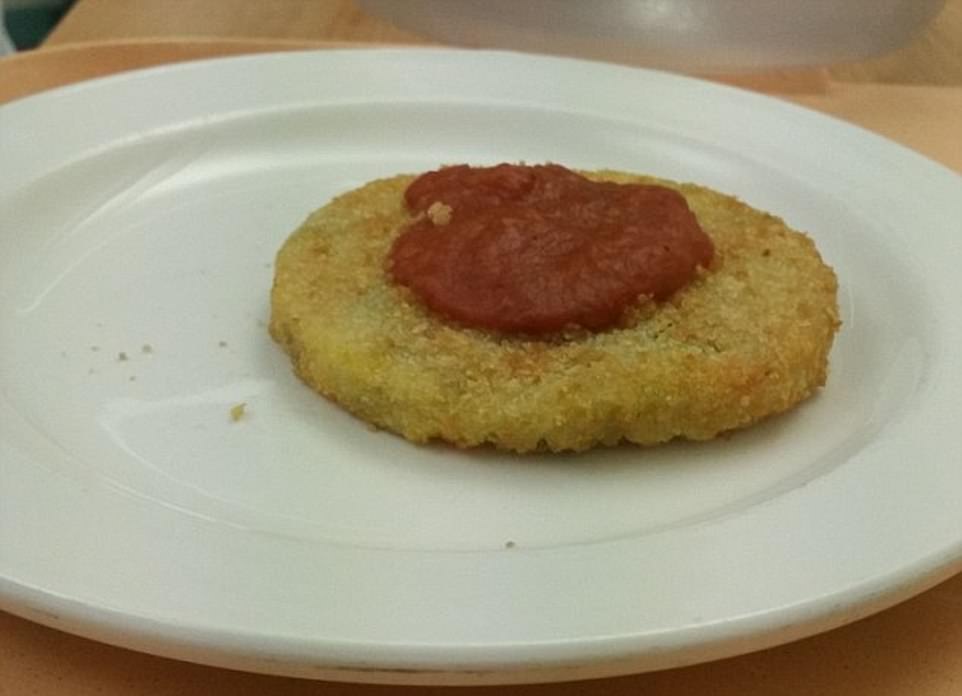 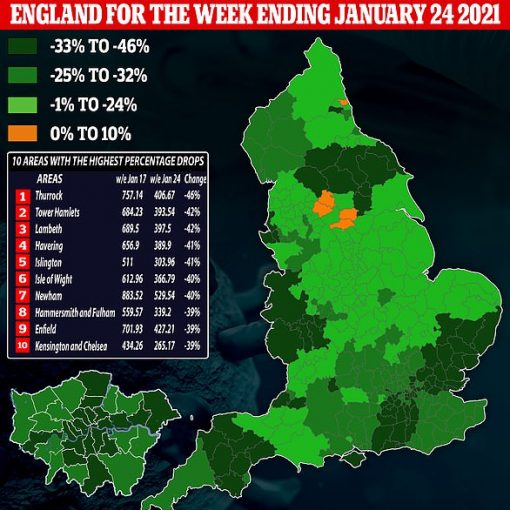 All but five local authorities in England saw coronavirus infections fall last week, official data shows in the clearest sign yet that […] 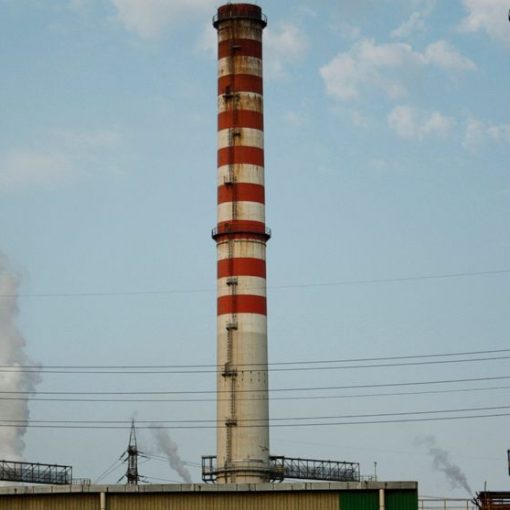 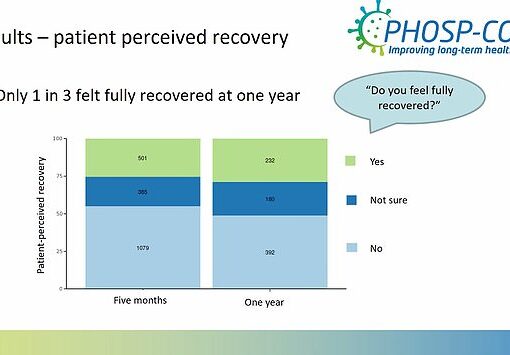 Tens of thousands of Britons who were hospitalised with Covid are still suffering a year on, a study has suggested. A University […] 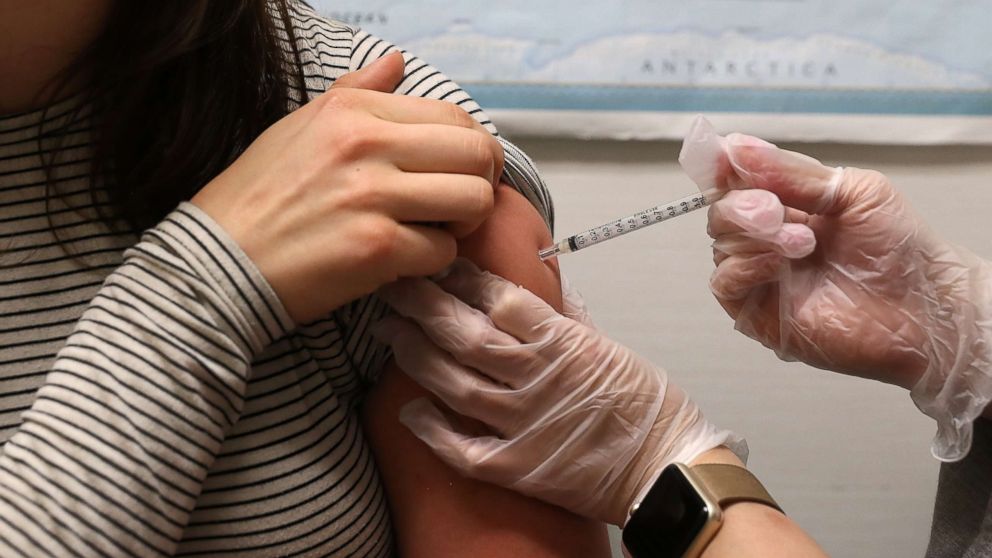 We have all seen startling headlines of celebrities canceling a concert due to the flu or individuals dying from the illness. The […]