Hocus Pocus 2 has cast a spell on Disney+ viewers.

The film, a sequel to the cult classic 1993 film starring Bette Midler and Sarah Jessica Parker, has become the number one film to premiere on the streamer in the United States to date.

The feat is ‘based on hours watched domestically in the first three days’ after its debut, according to the announcement made by Disney+ on Tuesday. 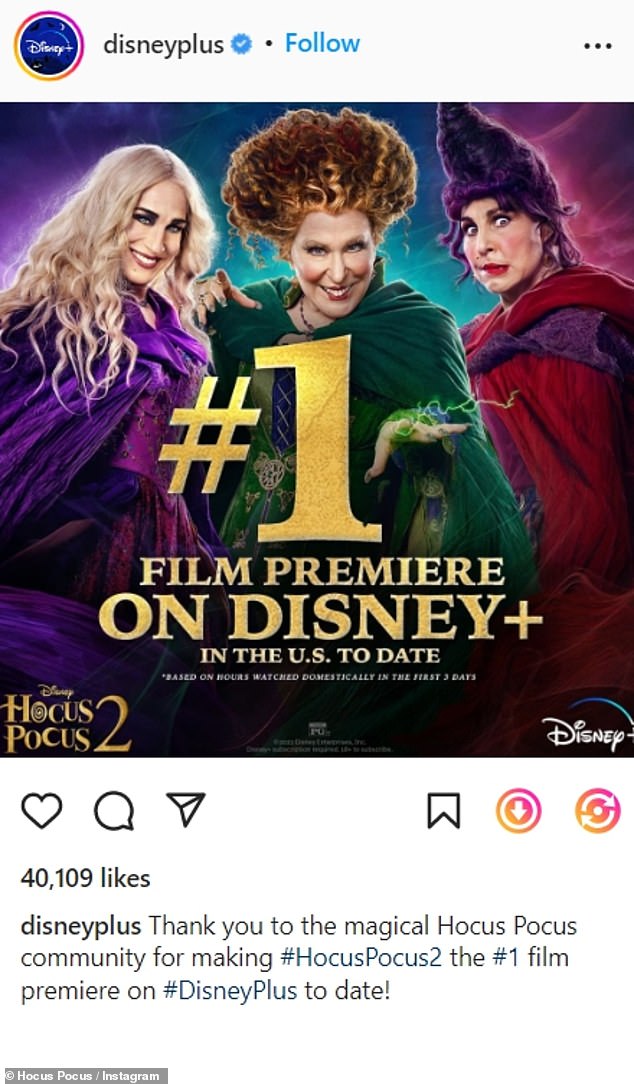 I put a spell on you! Disney+ announced Hocus Pocus 2 has become the number one film to premiere on the platform in the U.S.

Fans have been giving the film the thumbs up after its release on Friday.

Sarah Jessica Parker, Kathy Najimy and Bette Midler reprise their roles as the diabolical Sarah, Mary and Winifred Sanderson in the spooky comedy.

In the new chapter, three young women light the black candle, bringing the Sanderson sisters to modern-day Salem. The teens must figure out how to stop the witches, who try to eat kids as if they were candy corn, from wreaking havoc on the world.

The film received a 61-percent rating from the critics at Rotten Tomatoes, but that’s not keeping die-hard fans from falling in love with the sinister sisters all over again.

Magic: Fans have been giving the film the thumbs up after its release on Friday 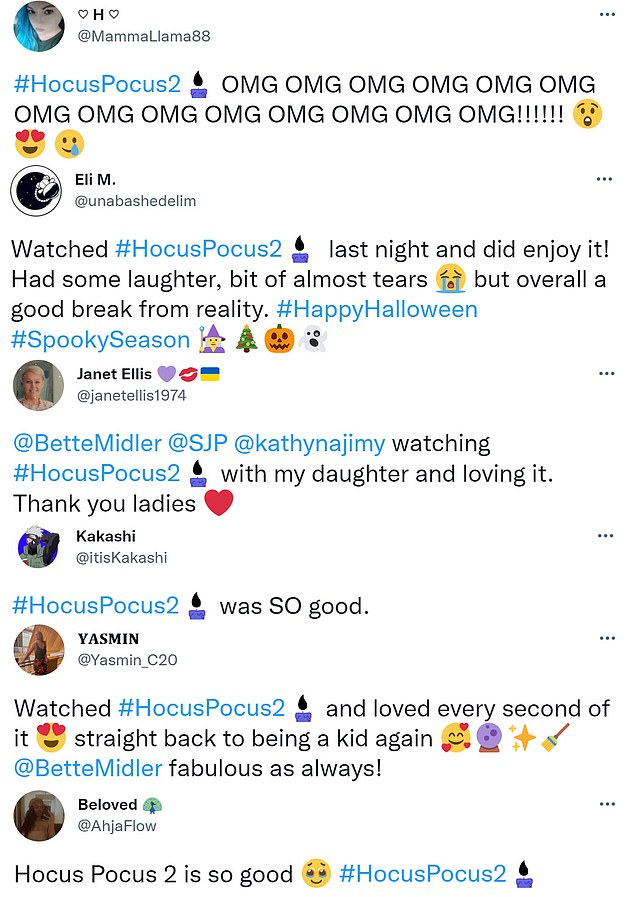 The Twitter-verse was atwitter with praise from those under the sequel’s spell.

‘Watched #HocusPocus2 and loved every second of it straight back to being a kid again @BetteMidler fabulous as always!’ wrote one fan, while another shared, ‘Did I get up at 3:30 to watch #HocusPocus2? Yes.’

Some enthusiasts spoke of the emotional reaction, they had.

‘Loved every second of it, straight back to being a kid again, wrote one, ‘Had some laughter, a but of almost tears, but overall a good break from reality,’ revealed another. 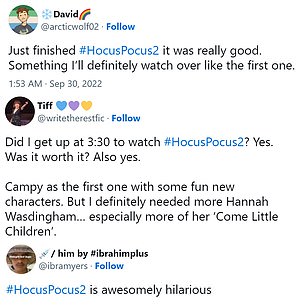 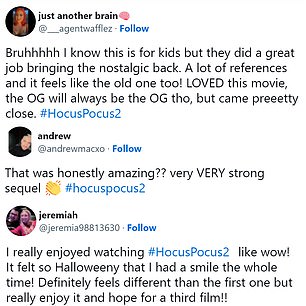 Back to childhood: One fan got up at 3:30 in the morning to catch the comedy shortly after it debuted on Disney+, others said watching the film took them back to their childhoods

Backstory: Viewers loved the back story of the Sanderson sisters included in the new chapter and are hoping for more. One exclaimed, ‘The young Sanderson sisters were the best part! We need more prequel detail!’

The original film was released in July 1993 and was a box office flop, but eventually drew a loyal fanbase when it was re-released in theaters during the Halloween season and that base grew even larger after the movie made it to TV screens.

In an interview with CBS Sunday morning, Kathy Najimy, 65, said, ‘when it came on TV, is was more accessible to the whole family overnight, and the generations kept showing it.’

Sarah Jessica Parker, 57, agreed, ‘What is so wonderful and feels so good is that the audience has become so diverse for this. People have integrated this into their lives — families and children and babysitters and grandparents and the LGBTQ-plus community. It’s just remarkable.’

Bette Midler, 76, believes the message of joy will resonate with fans new and old, ‘and it’s so wholesome… it’s even more wholesome than the last one.’

Diverse: Sarah Jessica Parker told CBS Sunday Morning, ‘ What is so wonderful and feels so good is that the audience has become so diverse for this. People have integrated this into their lives’ 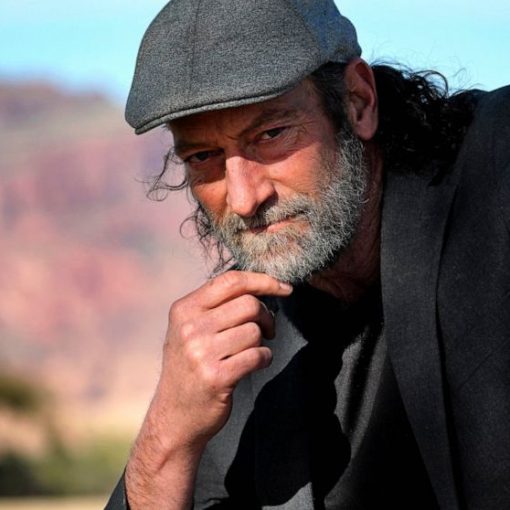 NEW YORK — In his Oscar-nominated performance in “CODA,” Troy Kotsur has one spoken line, but it’s a good one. Urging his […] 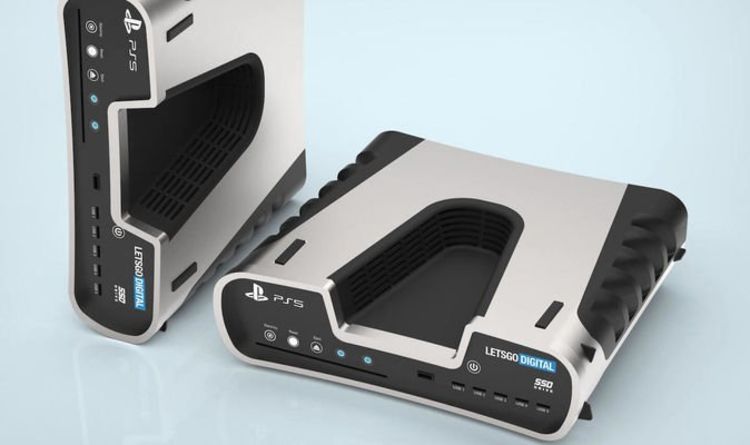 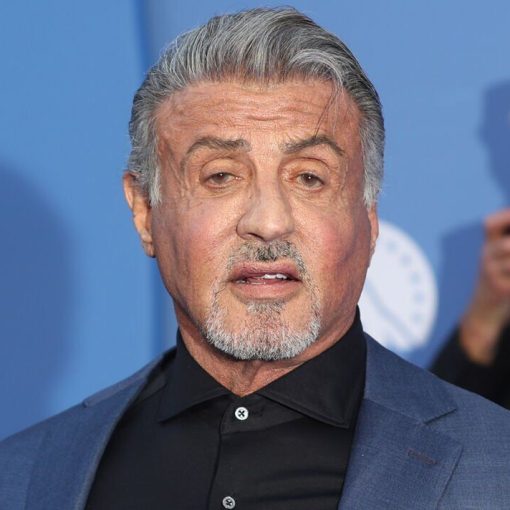 Sylvester Stallone has headed up the Rocky franchise since the 1970s. The American star originally wrote the script for the underdog movie […] 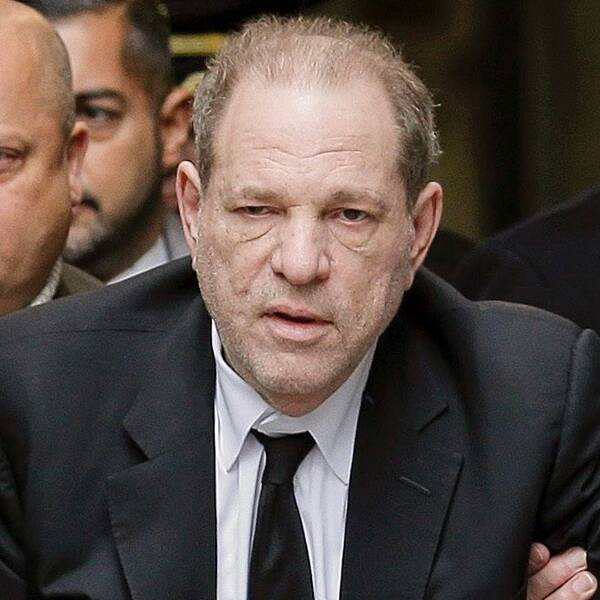 The release states that, with the new charges, Weinstein “now faces a total of four counts each of forcible rape and forcible […]