Thousands of festivalgoers descended on the Mojave Desert this week to attend a post-apocalyptic gathering that featured decked-out cars, guns and outfits inspired by dystopian movie series Mad Max.

The festival holds a variety of wacky events including ‘fight to the death under Thunderdome,’ burlesque shows and drinking games, but anyone who attends must wear a costume, including staff, journalists and volunteers.

Pictures show creative costumes full of references to dystopian movies and themes, with many choosing to bare all as they partied under the sun.

According to the website, the festival provides ‘makeovers at the event-sponsored post-apocalyptic beauty salon.’ 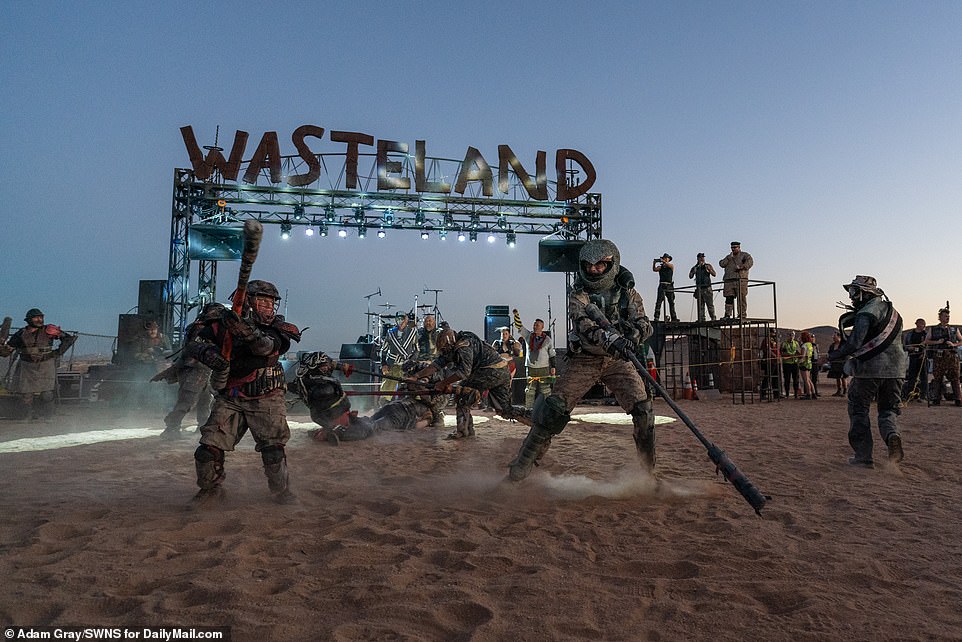 The festival includes other post-apocalyptic activities including ‘Jugger,’ shown here, from another cult 1980s film 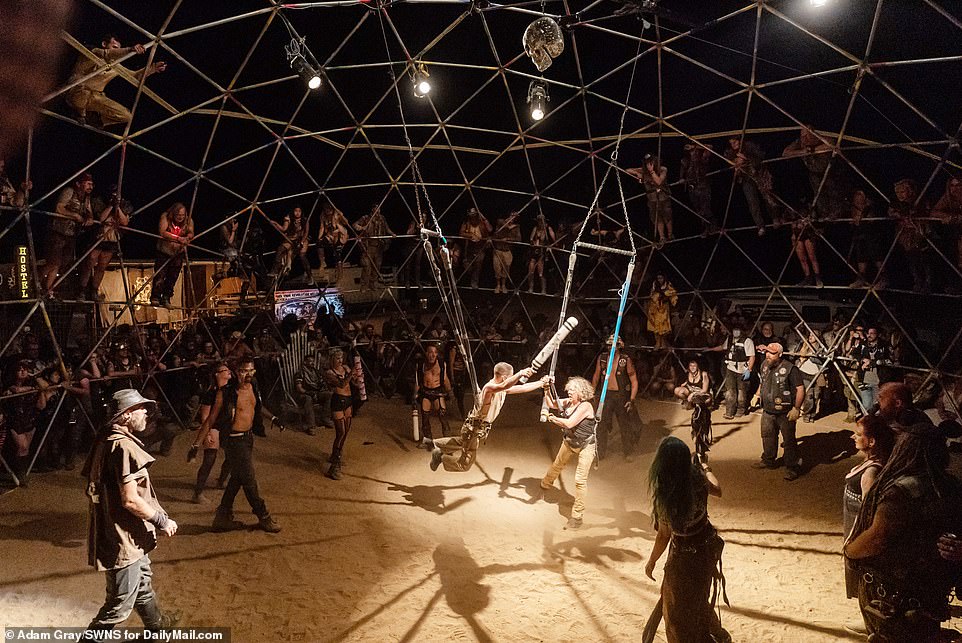 The festival holds a variety of wacky events including ‘fight to the death under Thunderdome,’ a tribute to the famous Mad Max scene 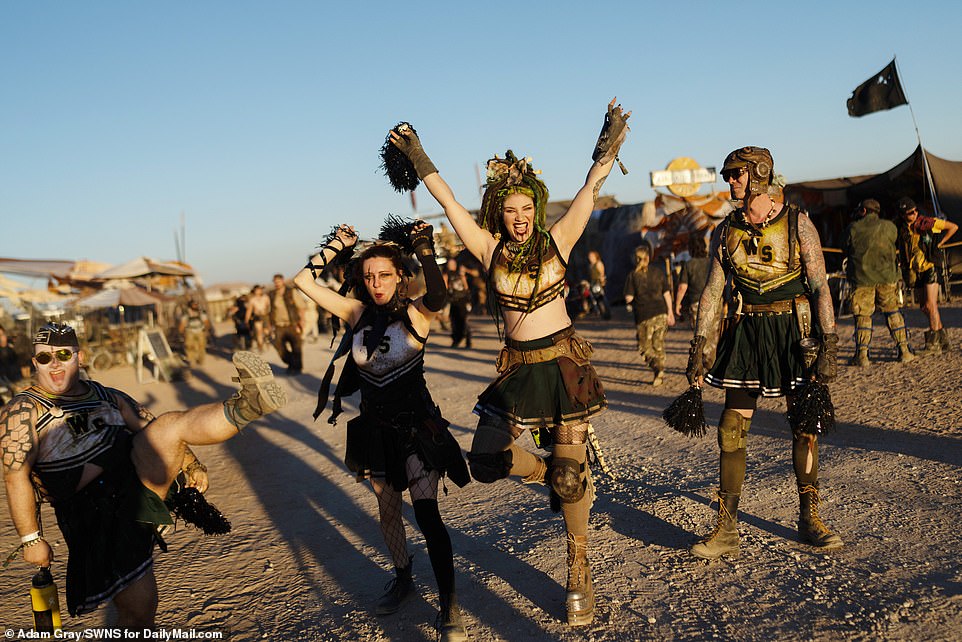 All attendees of the festival are required to show up in full costume, and that includes staff, volunteers and journalists 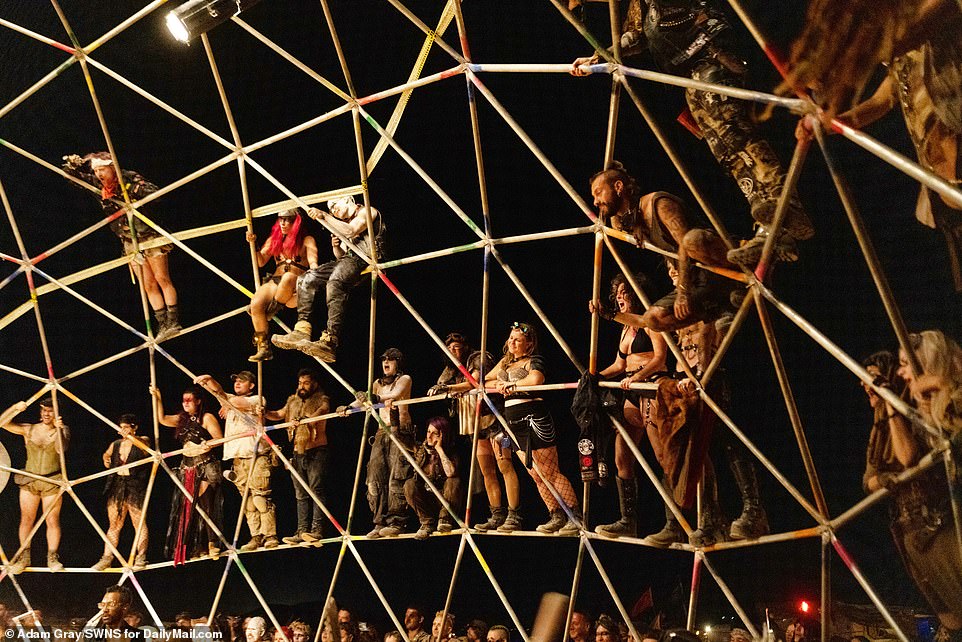 The Edwards, Calif., carnival was created in 2010 and received media attention for its homage to the Mad Max franchise 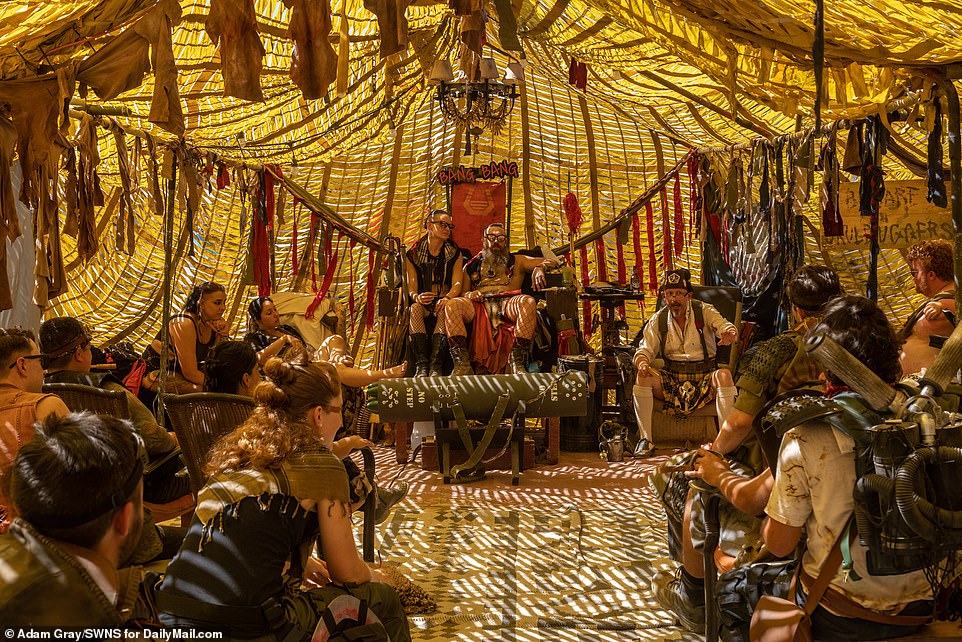 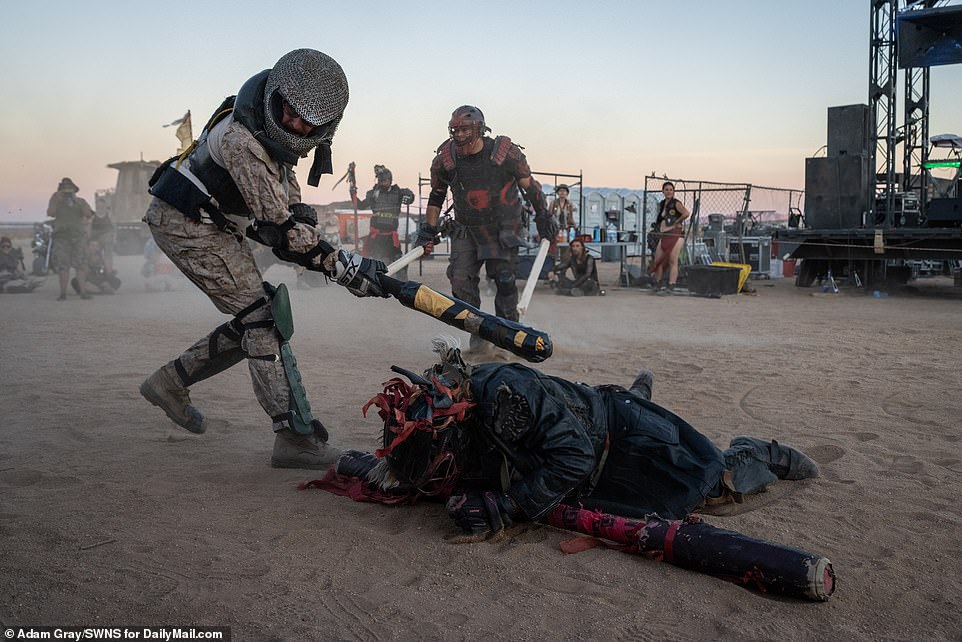 Other activities include car cruises, costume contests, a film festival, a post-apocalyptic swimsuit competition and a role playing bounty-hunter game.

The Edwards, Calif., carnival was created in 2010 and received media attention for its homage to the Mad Max franchise, and even received a video greeting from director George Miller, along with a sneak peek of pre-production.

Mad Max – the movie that made Mel Gibson famous – was released in 1979. Max Max 2 followed in 1981, with Mad Max Thunderdome concluding the series in 1985. The character was then rebooted in 2015, with Tom Hardy starring as Max opposite Charlize Theron, who played Furiosa.

The first set of movies were set in a post-apocalyptic Australia where bands of murderous criminals roam the countryside looking to steal fuel from unsuspecting victims.

The founders of the event, Karol Bartoszynski, Jared Butler and James Howard, wished to create a ‘fully-immersive fan event that would really feel like living inside a movie.’

And the trio succeeded, as the festival grew from hundreds of attendees to thousands and has been met with growing enthusiasm as fans from across the country flock to the desert.

Their set includes the ‘iconic’ Wasteland Gates that greet everyone who shows up for the five-day event, and beyond that lies a fully themed Wasteland City that resembles the patchwork villages common in Miller’s movies.

The revelers are encouraged to split into ‘tribes’ that compete against each other in wasteland-themed games including Jugger, a ‘post-apocalyptic version of armed football/rugby, based on a cult 80s movie.’ 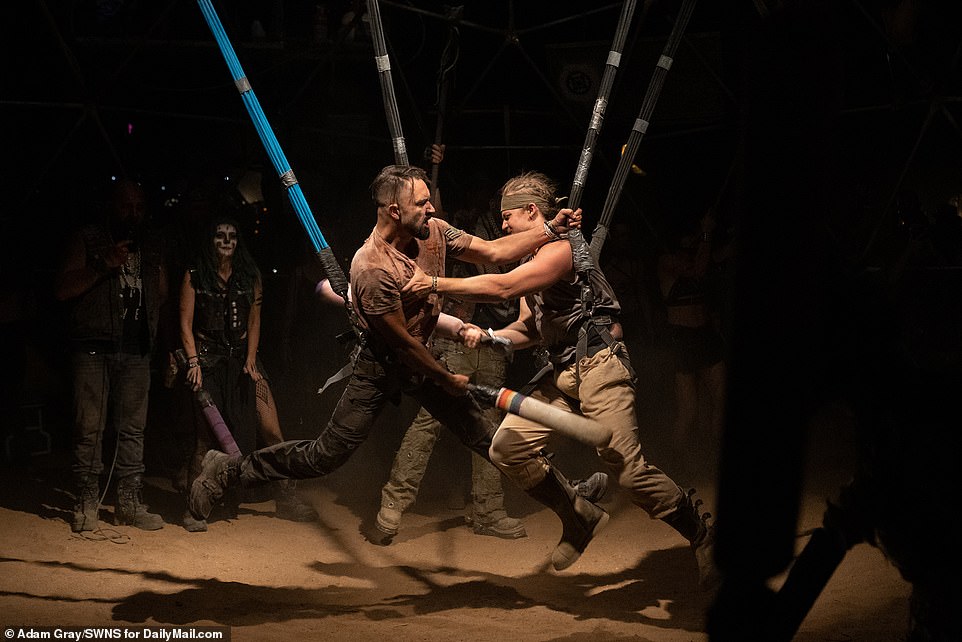 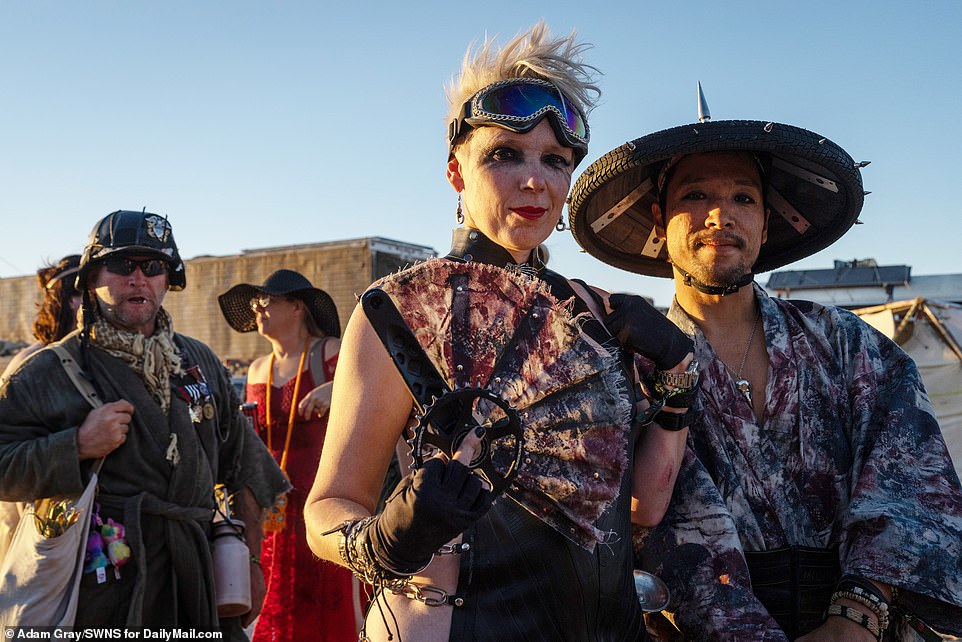 Partiers adorn a variety of crazy outfits that include studded goggles, spiked boots and an abundance of leather 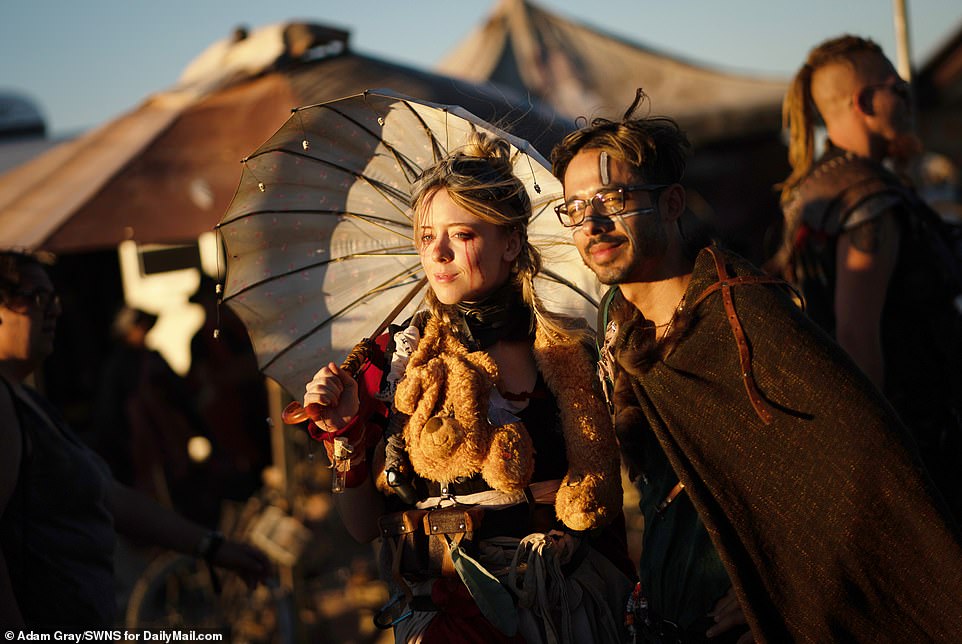 While the festival is Mad Max themed at its core, other dystopias are paid homage to and festivalgoers are inspired by many different things 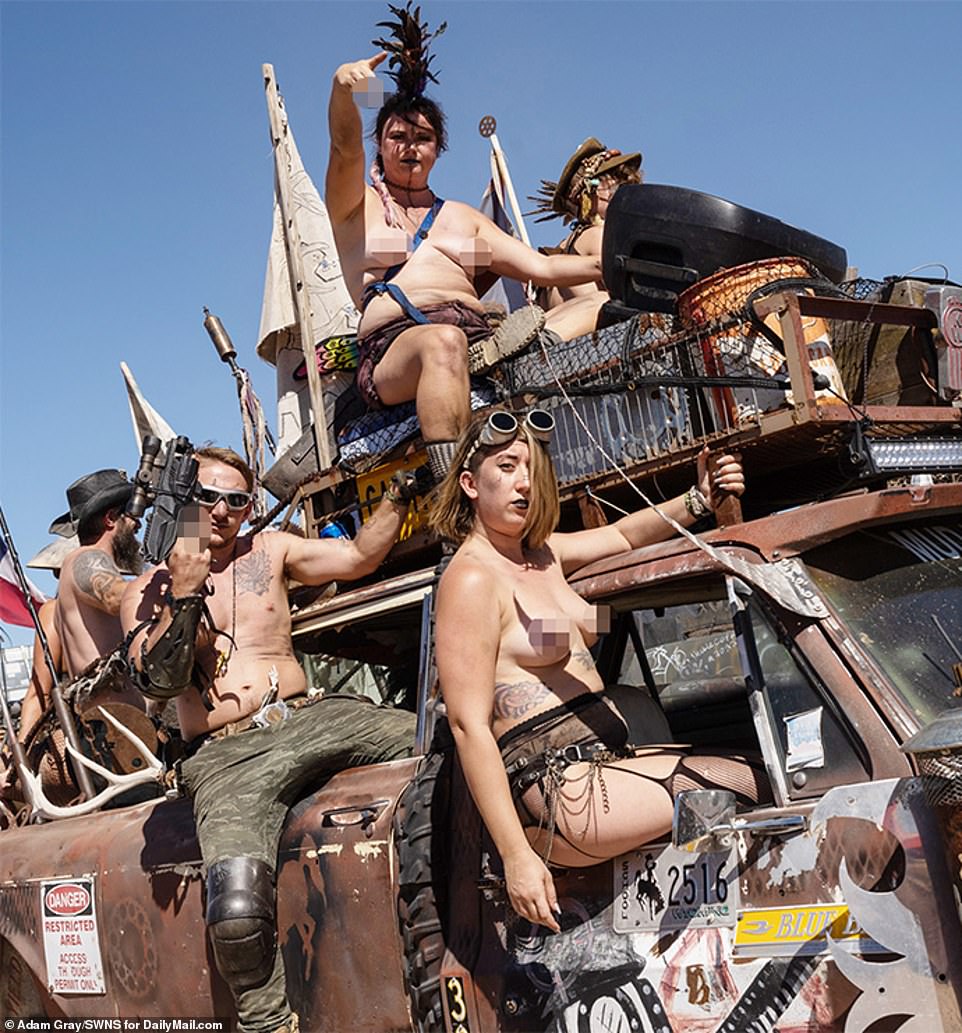 According to the website, the festival provides ‘makeovers at the event-sponsored post-apocalyptic beauty salon’ 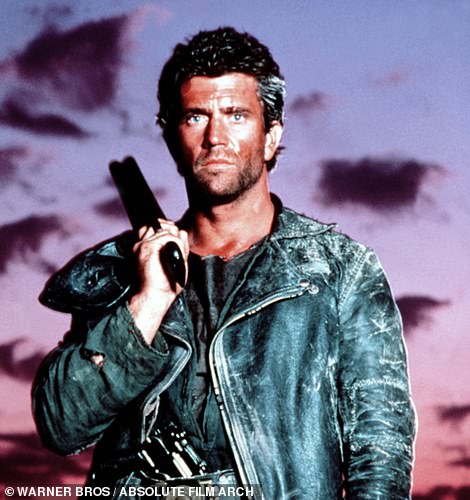 Musicians and DJs from across the world fly in for the event to provide a soundtrack for the festivities, and organizers have brought Hollywood set and prop designers to teach workshops.

Mad Max was first a 1979 film by George Miller that was released to widespread critical acclaim, as audiences around the world flocked to see Miller’s visionary take on societal collapse starring Mel Gibson as the protagonist.

The film was so popular it was considered at one point to be the most profitable movie ever as it was filmed on a $400,000 budget but grossed $100 million worldwide.

Three sequels followed in the 1980’s until Miller decided to continue the story of protagonist Max Rockatansky with his 2015 film Mad Max: Fury Road, which was also released to glowing reviews for its practical effects, set design and storytelling.

The release of Fury Road only propelled Wasteland Weekend’s popularity as attendees now had more inspiration – many show up in makeup inspired by the film’s leading lady, Imperator Furiosa, played by Charlize Theron. 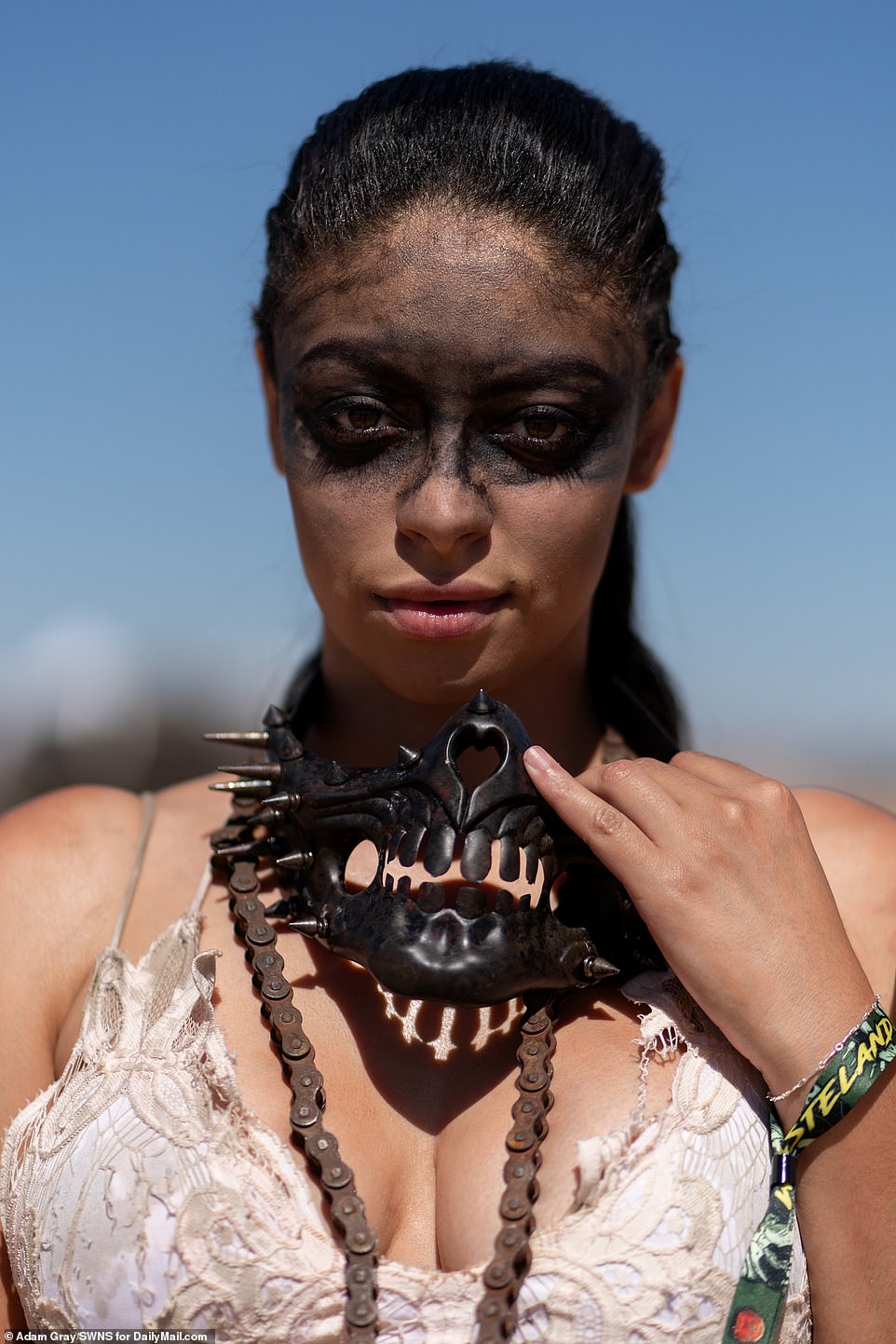 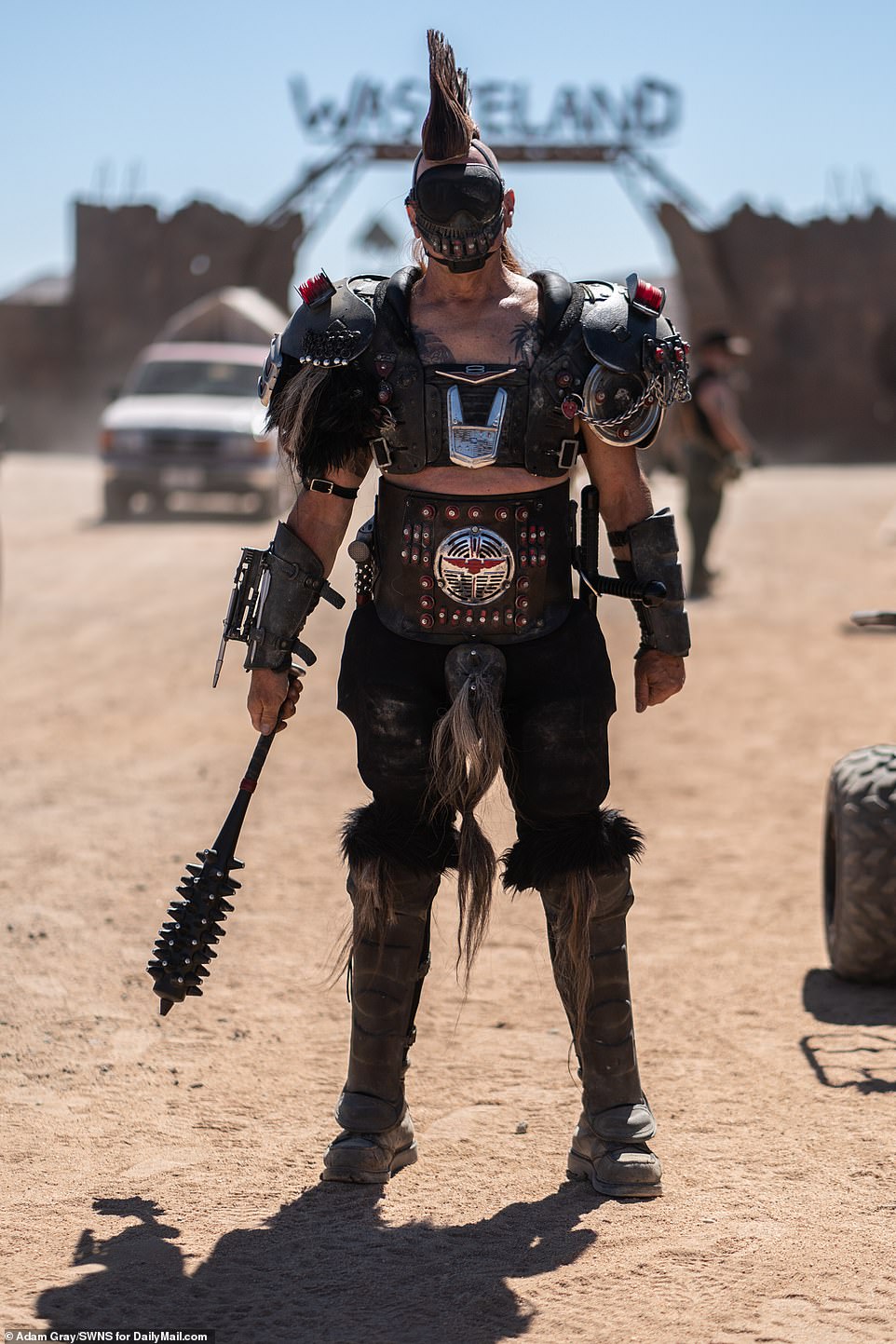 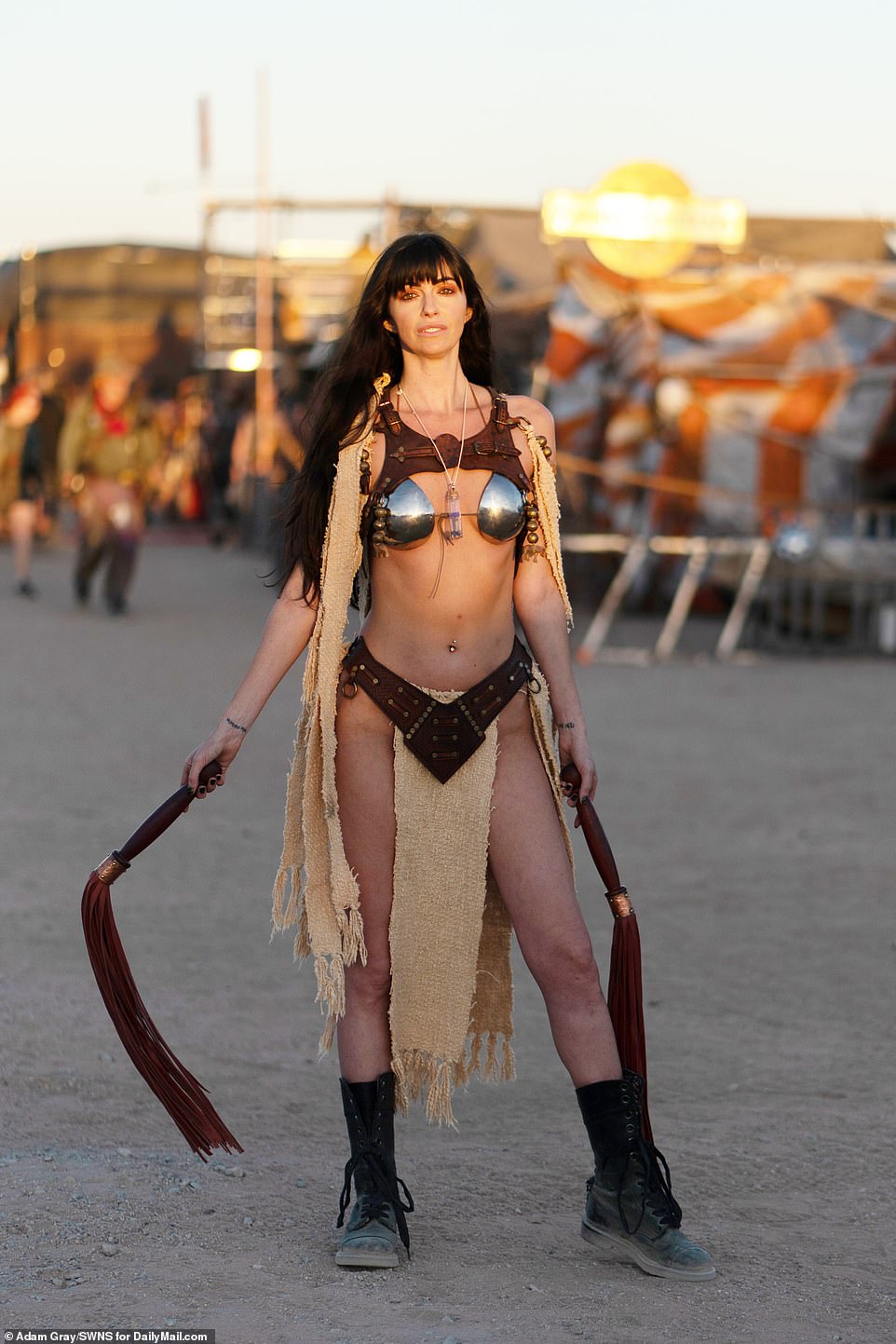 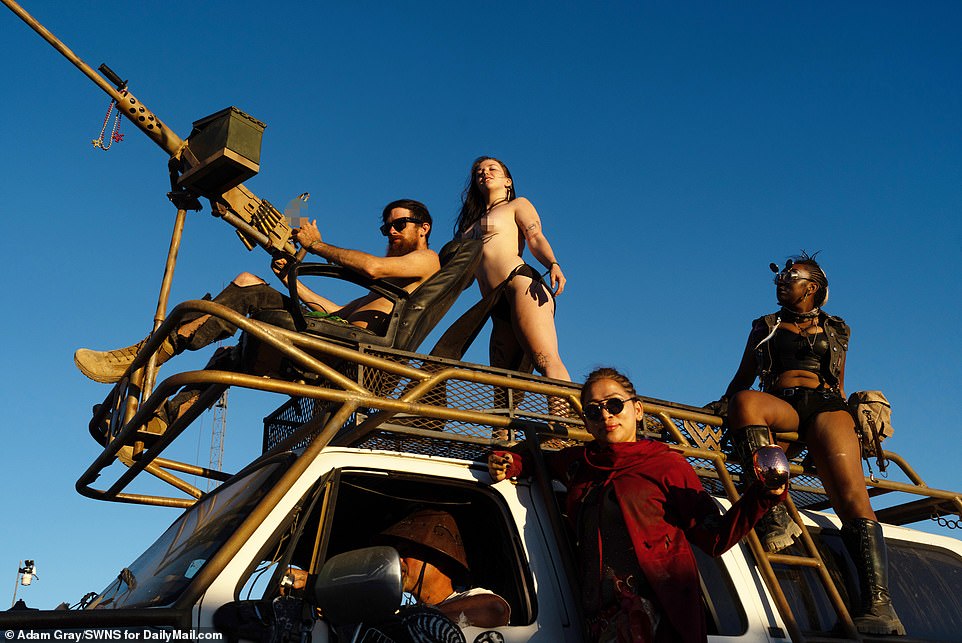 While many of the props and sets feature guns, no firearms are allowed at the festival and each one shown is a replica or deactivated 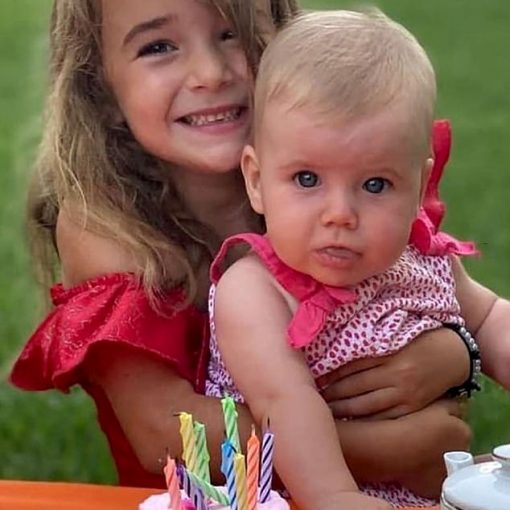 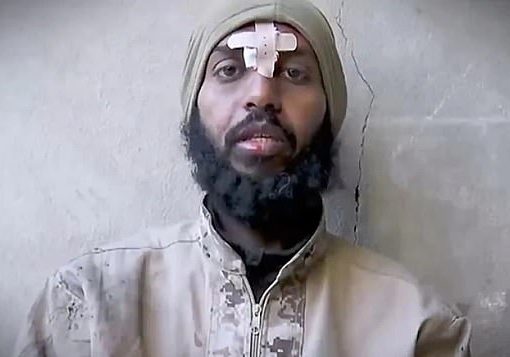 A Saudi-born Canadian who U.S. prosecutors allege is responsible for prominent ISIS propaganda videos in English has been brought to Virginia to […] 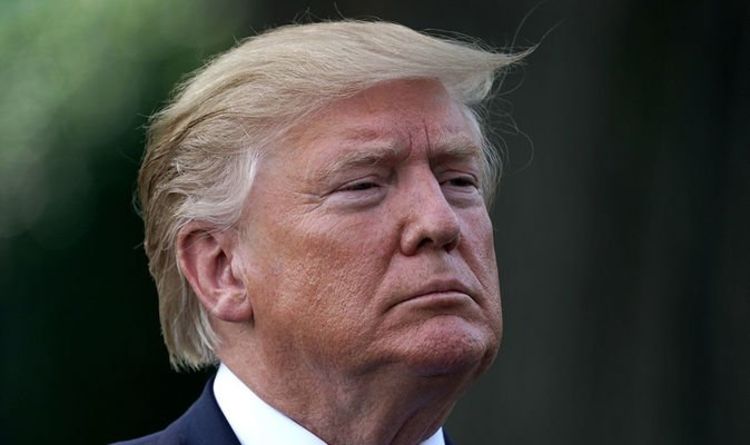 Trump told reporters on Sunday, while on an airport runway in New Jersey, he was attempting to tackle the high levels of […] 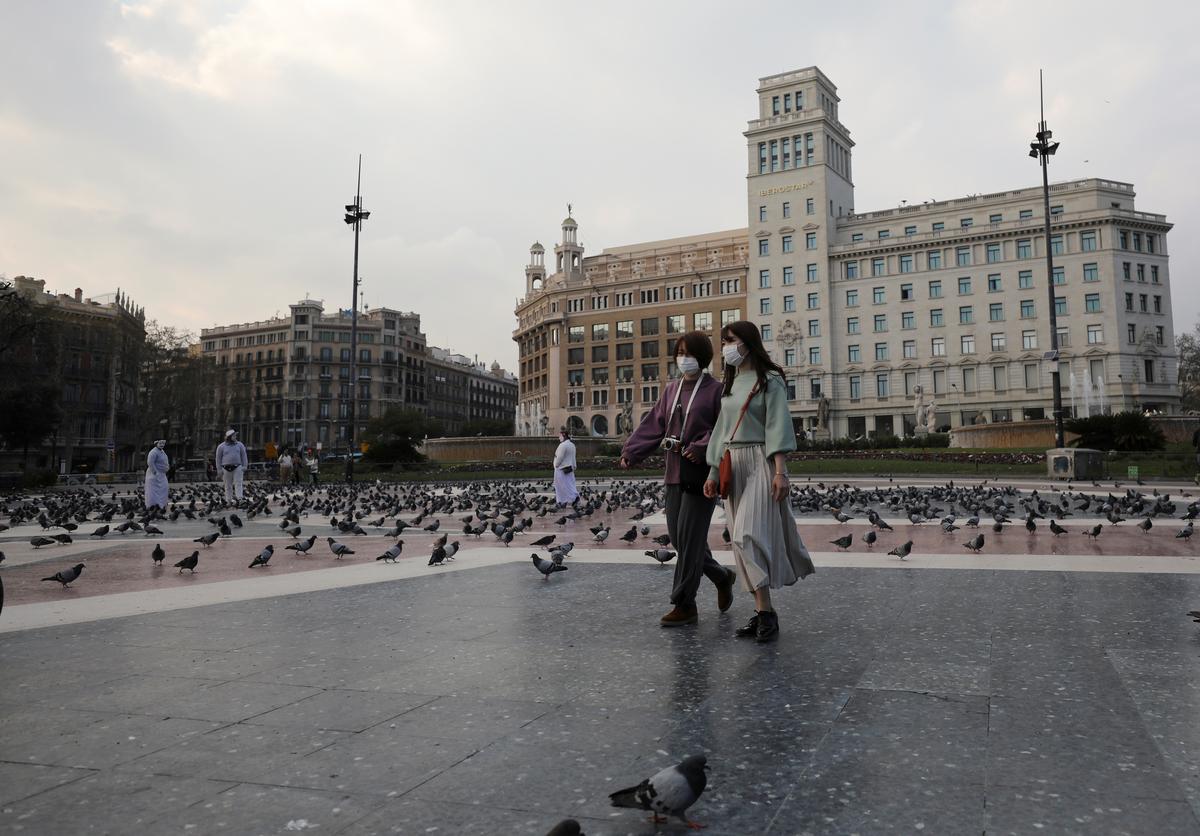