The eco warrior who prompted fury by pouring a bucket of human excrement over a memorial to Captain Sir Tom Moore has been reported to the police.

Derbyshire Police has been alerted to footage of former medical student Maddie Budd, 21, targeting the tribute to the beloved national hero.

Video of the stunt, which was carried out for the pressure group End UK Private Jets, has been passed to the constabulary by the company who made the memorial, AGC Fabrications.

Its managing director Austin Cox confirmed to MailOnline this morning: ‘We are working with the police, we have got a crime reference number.

‘We are pursuing it and hoping they will prosecute. I can’t really say more than that at the moment.’

He had earlier publicly tweeted: ‘I am the person who gifted the memorial to Thistley Meadow, and would like to inform you that we will be pursuing Maddie for vandalism, We will work with the police to ensure this taken as far as possible.’

The video will be scrutinised by experts who will decide if the act passes a criminal damage threshold.

Derbyshire Police said: ‘It has been reported to us that the Captain Sir Tom Moore memorial at Thistley Meadow in Hatton has been defaced. Our officers are aware and enquiries are ongoing.’

Ms Budd filmed herself pouring the canister of faeces and urine over the memorial to the late captain, who made international headlines in 2020 when he raised millions for charity in the run-up to his 100th birthday during the Covid-19 pandemic.

‘All of this is true and the Government won’t even end UK private jets, every time one takes off, it pours a bucket of sh** and blood onto everything that Captain Tom stood for’

Backlash against the act has been so severe it sparked threats of pressing police charges against the eco fanatic. 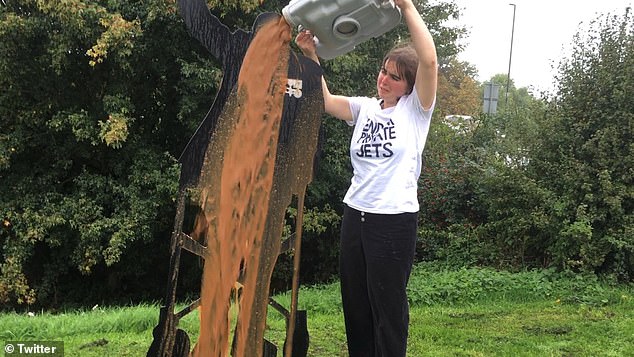 Former medical student Maddie Budd, 21, filmed herself pouring a bucket of human excrement over a memorial to Captain Sir Tom Moore in a protest over the use of private jets 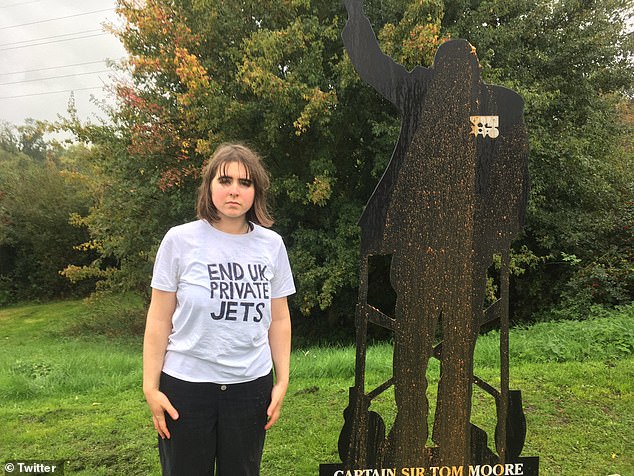 The vandalised memorial was in memory of Captain Sir Tom Moore, who made international headlines in 2020 when he raised money for charity in the run-up to his 100th birthday during the Covid-19 pandemic 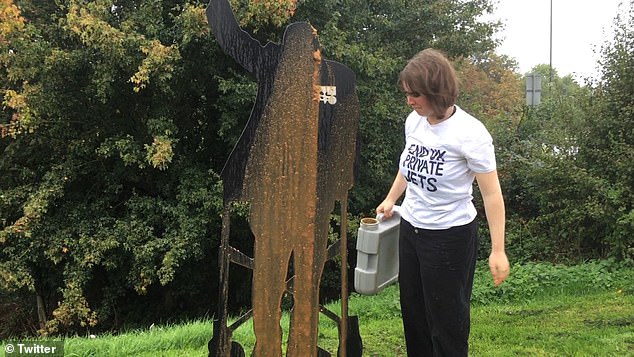 Ms Budd tried to justify her desecration of the memorial by claiming that ‘every time one [private jet] takes off, it pours a bucket of sh*t and blood onto everything that Captain Tom stood for’

However, thanks to media appearances, his efforts caught the imagination of the nation and by his birthday he had raised over £30million. He was considered a national treasure by his death on February 2, 2021 after catching Covid.

Ms Budd’s act of vandalism against the beloved captain, who was awarded a flypast by the RAF and British Army on his 100th birthday and was even knighted by the Queen, has prompted predictable outrage from the public.

‘How will this convince people to earn private jet use?’ wrote one Twitter user. ‘It looks like a child throwing a disgusting tantrum and being beyond disrespectful. This kind of behavior will not convince anyone to make any changes.’

Another wrote: ‘Hope she gets jail time for this. Not helping your cause at all, if anything I’m now against you and your cause. Disgusting honestly you should be distancing yourselves from this disgraceful behaviour not supporting it.’

While a third raised questions about why Ms Budd is no longer a medical student.

‘Former medical student? What is she now? Or is that just too embarrassing to publicise.’ 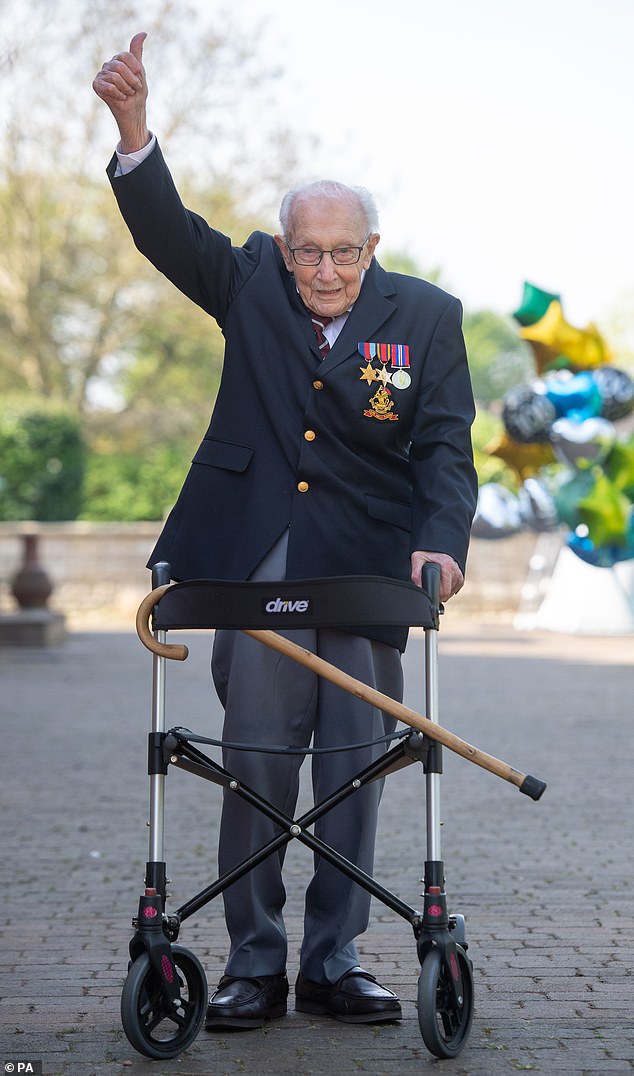 And a person who claims to have gifted the memorial said they would be pursuing Ms Budd for vandalism.

‘We will work with the police to ensure this taken as far as possible.’

According to her Facebook page, Ms Budd was arrested in September last year in London while protesting with doctors and health care professionals for Extinction Rebellion.

Emissions from flights are known to be significantly worse than any other form of transport, and private jets generally produce significantly more emissions per passenger than commercial flights.

Many celebrities have been pulled up for their private jet use, with one of Kylie Jenner’s flights reportedly lasting an offensively short 17 minutes.

It is estimated that her 17-minute jaunt would’ve resulted in a ton of carbon dioxide emissions.

While in itself not a huge amount, it is about a quarter of the total annual carbon footprint of the average person globally.

During the COP26 climate change summit in Glasgow last year, there was a total of 76 flights involving private jets, or VIP flights, arriving in and around Glasgow in the four days leading up to 1 November. 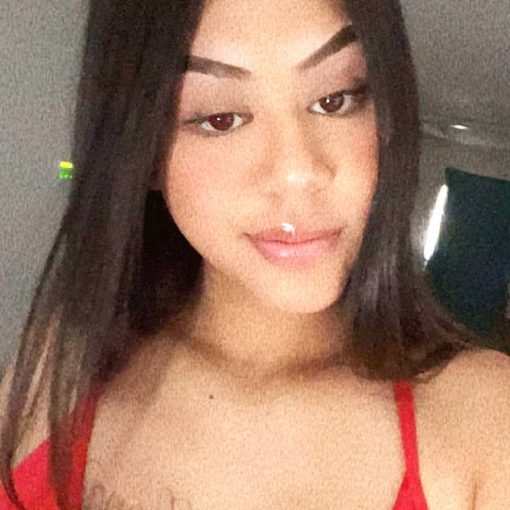 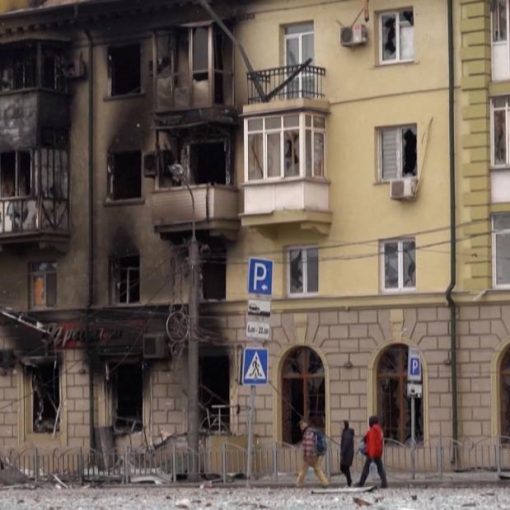 Ukrainian refugees play with frisbees as they wait in front of a gymnasium in Tijuana, Mexico on Tuesday April 5. (Gregory Bull/AP) […] 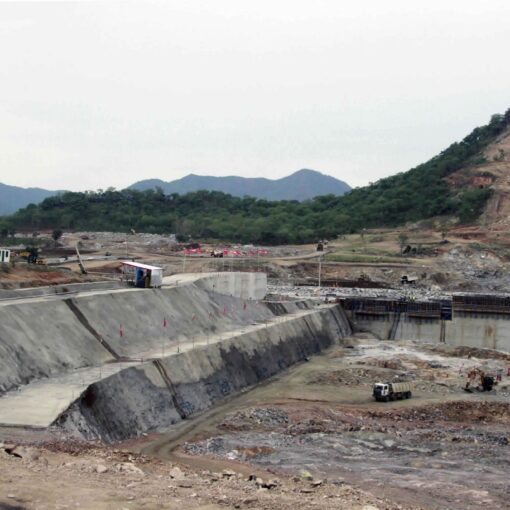