Dua Lipa stepped out for a night on the town with a couple of her mates, Mark Ronson and new wife Grace Gummer, in New York City on Friday.

The friendly affair, which seemingly included a stop for dinner, comes two days after the Daily Mail exclusively reported that she was seen on a dinner date with comedian and Daily Show host Trevor Noah.

Lipa, 27, showed off her fashion sense in an all-black ensemble when she stepped out solo for her night out with her friends in Manhattan. 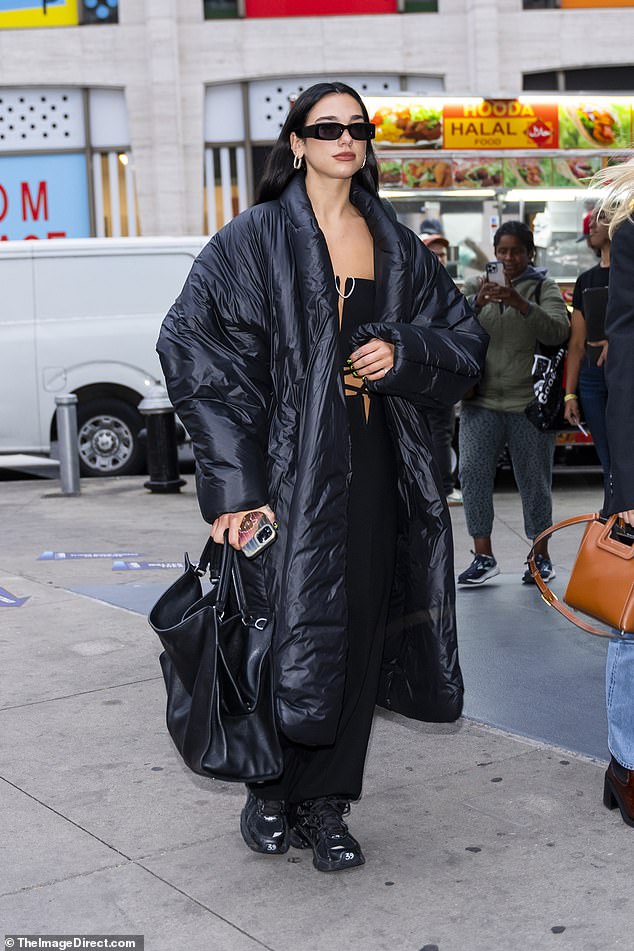 Night out: Dua Lipa enjoyed a friends night out in New York City on Friday, two days after her dinner date with Trevor Noah

The New Rules star was decked out in a plunging jumpsuit that gave more than a hint of her midriff with a strappy opening along her stomach.

With temperature dropping down to the low 60s Fahrenheit as a high on Friday and ominous rain clouds on the horizon, the songstress covered up with a puffer trench coat that fell to nearly her ankles as she carried a large leather bag.

She rounded out the ensemble with a pair of black sneakers, stylish sunglasses, and had her dark tresses styled long and flowing down to the middle of her back with a part in the middle. 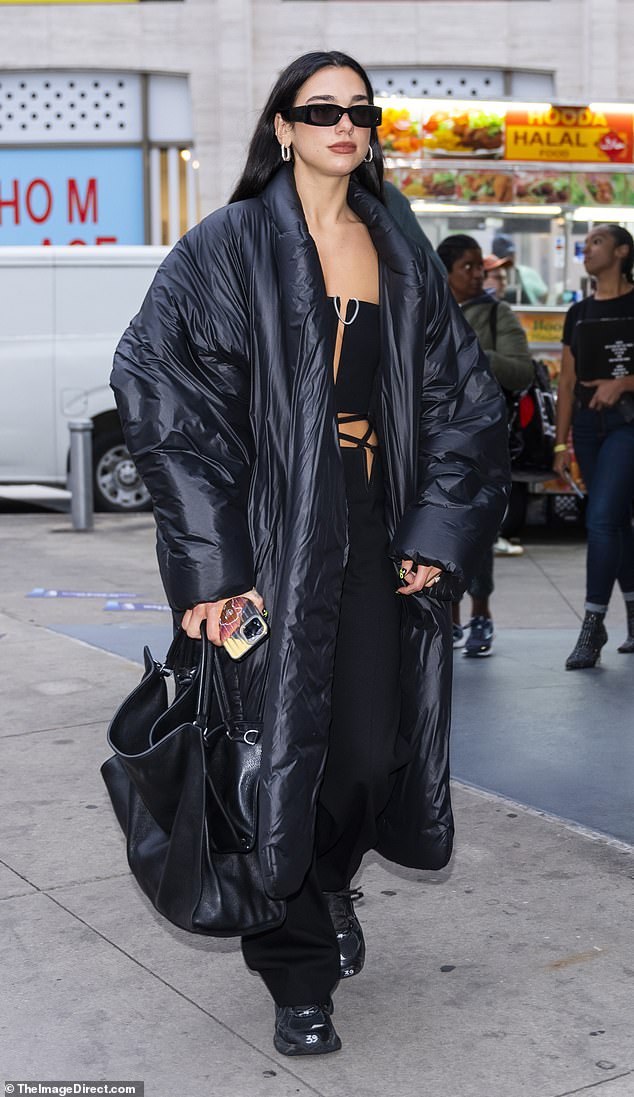 Lady in black: The New Rules star was decked out in a plunging jumpsuit that gave more than a hint of her midriff with a strappy opening along her stomach, and a puffer trench coat 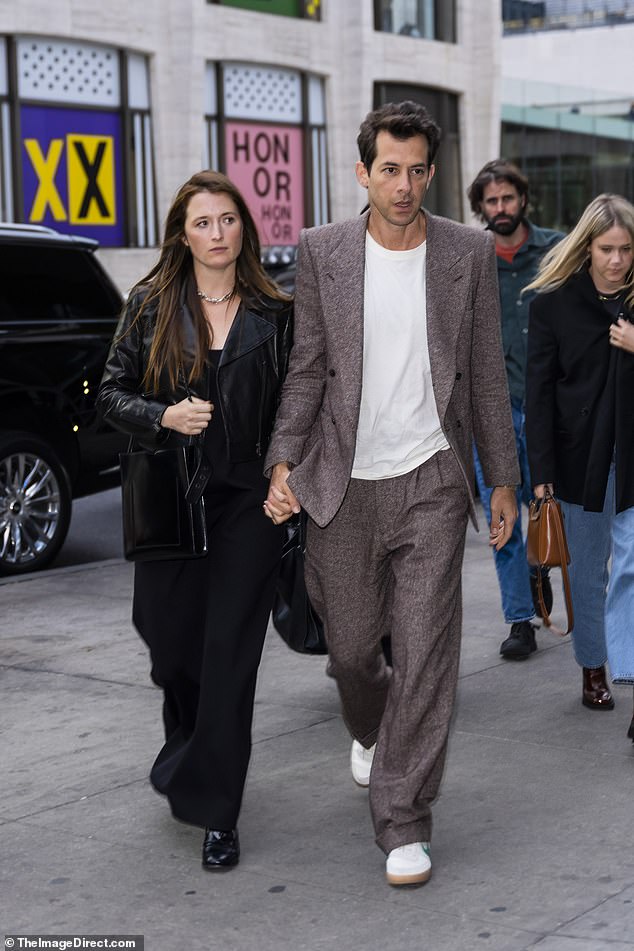 Fashionable: She was joined by actress Grace Gummer, who went with a black outfit, and her husband, music producer Mark Ronson, who wore a brownish tweed suit

Known to be a fashionista of sorts, Ronson was spotted holding hands with his wife dressed in what appeared to be a brownish tweed suit that he matched with a white t-shirt.

The record producer, songwriter and DJ, 47, also donned a pair of white sneakers and had his dark brown hair styled up off his face, which sometimes can look like a pompadour.

Gummer, who’s the daughter of Oscar-winning actress Meryl Streep and sculptor Don Gummer, also went with an all-black ensemble that included a leather jacket and boots. 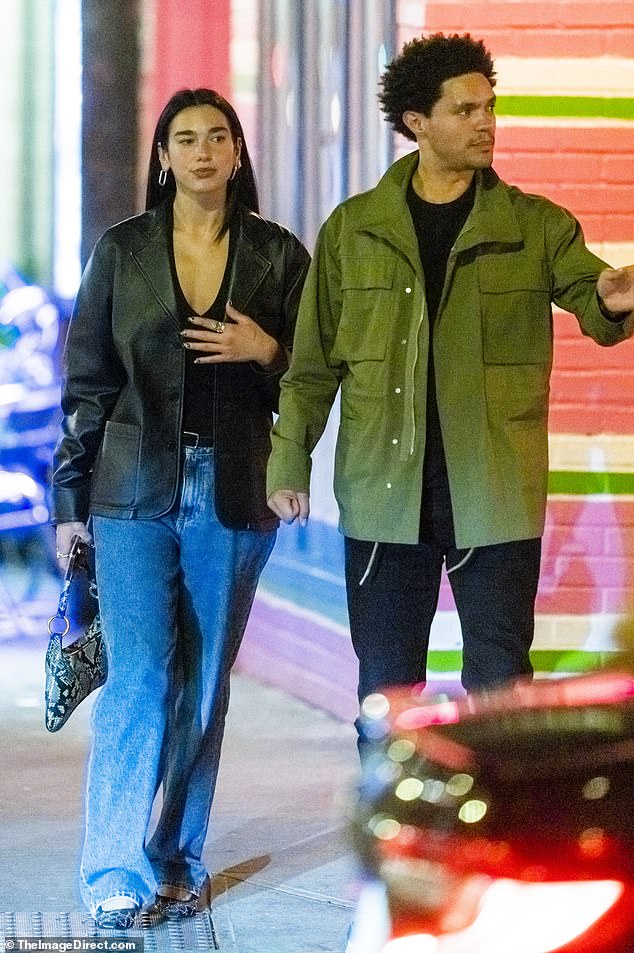 New romance brewing: Lipa and Noah took a casual stroll after sharing a kiss and a hug after eating dinner at at Miss Lily’s, a Jamaican restaurant in the East Village on Wednesday

The actress, 36, who’s known for roles in The Newsroom and Mr. Robot, had her normally blonde locks dyed brown and styled long and straight with a part on the slight right.

In Wednesday’s Daily Mail exclusive, Lipa and Noah were pictured kissing and hugging while on their cozy dinner date at Miss Lily’s, a Jamaican restaurant in the East Village.

They appeared to have stellar chemistry, especially when they ended their evening together with a kiss and sweet hug before going their separate ways.

‘They were quietly sat away from everyone else at restaurant, one onlooker at the restaurant told DailyMail.com, adding, ‘It was clear they were into each other and sat close together throughout the meal. They left together and walked, stopping for long embraces and on the second kiss with hugs.’

Heating up: The Daily Mail exclusive reported that Noah and Lipa appeared to have stellar chemistry during their night out together that included a kiss and hug

Their date night comes in the wake of Noah announcing that he is leaving The Daily Show after seven years at the helm during which the late-night infotainment show’s viewership declined dramatically.

Fans started buzzing on social media on Thursday after the pair was photographed having dinner the previous evening.

Despite all the chatter, People reported that the pair are keeping their relationship platonic, with a source telling the publication that they are ‘just friends.’

Page Six had a different take on their dinner, and reported that their relationship is in the early stages of dating, but stopping short of calling them a couple. 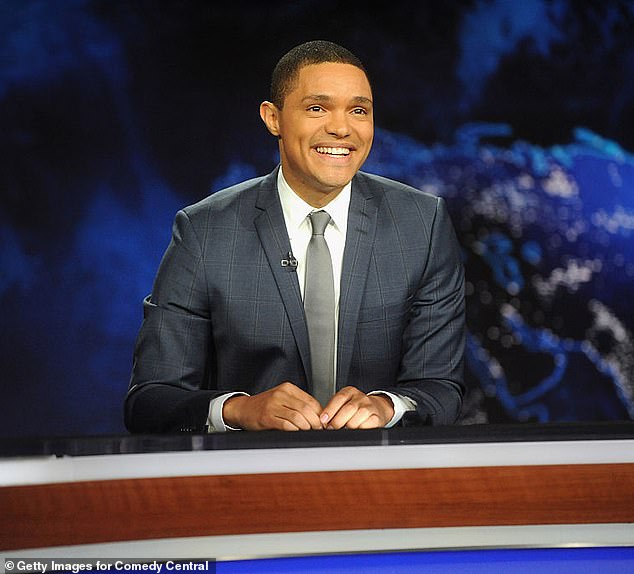 Moving on: The Lipa-Noah dinner date comes in the wake of the comedian announcing that he is leaving The Daily Show after seven years at the helm

One informant revealed Lipa was ‘smitten’ on what was ‘definitely a date’, and that the comedian was ‘a gentleman’ the entire evening.

‘There is definitely interest on both ends,’ the Page Six insider insisted.

Lipa’s last known romance was with model Anwar Hadid, 23. They called it quits in December 2021 after more than two years as a couple.

Noah last dated actress Minka Kelly, 42, but they went their separate ways this past May after having been together since 2020.

R&B singer Aaliyah is best known for two events that bookended her career: becoming involved with infamous singer R. Kelly as a […] 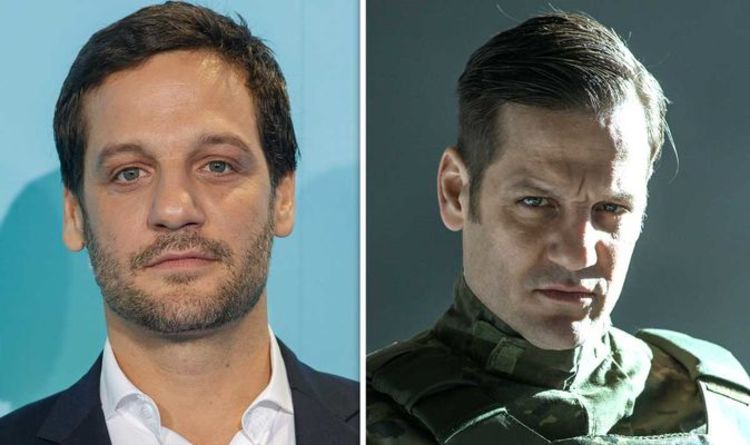 Money Heist season three has returned to Netflix with a brand new series of the Spanish crime drama. Set primarily in Madrid, […] 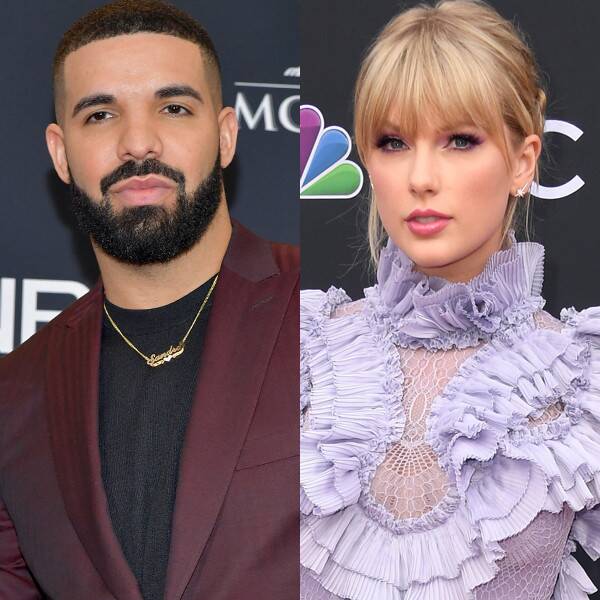 Frazer Harrison/Getty Images Drake has good reason to be all up in his feelings tonight. The Scorpion rapper officially dethroned Taylor Swiftat the […] 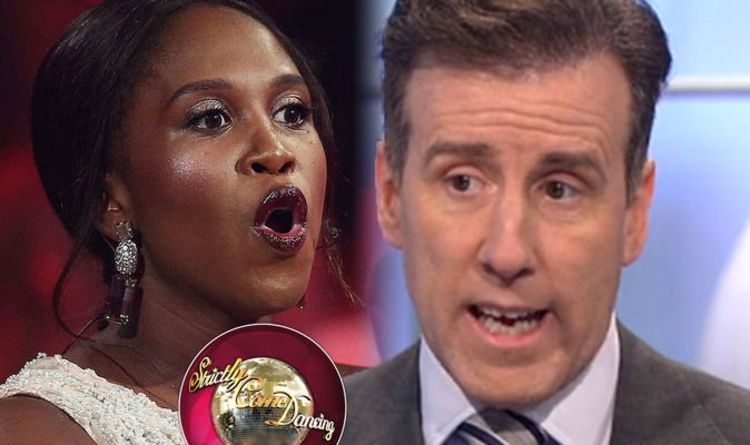 Anton, 53, was one of the hot favourites to replace Darcey, 50, when the former Strictly Come Dancing judge announced her exit […]