The Federal Reserve has issued another super-sized increase to interest rates, deepening the risks of a sharp economic downturn and job losses.

At the end of its two-day policy meeting on Wednesday, the US central bank raised its policy rate by 75 basis points for the third time, to a range of 3 percent to 3.25 percent, the highest level since the 2008 financial crisis.

The Fed is attempting to cool down the economy in order to tame rampant inflation, which remains stubbornly high at 8.3 percent — but as interest rates climb, the path to a so-called ‘soft landing’ for the economy is narrowing.

Soaring prices are putting the squeeze on American families and businesses and already have become a political liability for President Joe Biden, as he faces midterm congressional elections in early November.

But a sharp contraction of the world’s largest economy would be an even more damaging blow to Biden, to the Fed’s credibility and the world at large.

The US economy has been flashing warning signs for some time, including six straight months of contraction in the first half of the year, meeting one informal definition of a recession — but Biden denies a recession has begun. 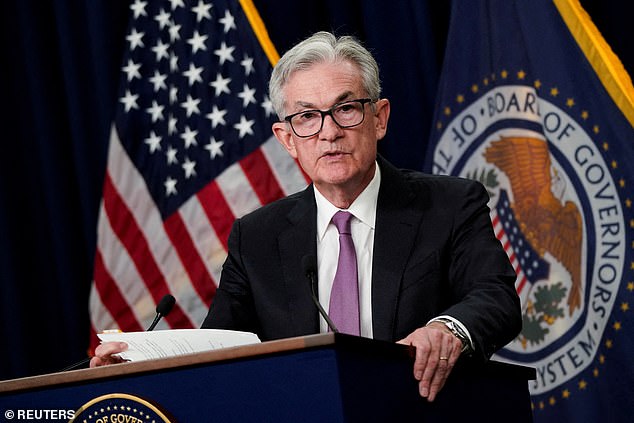 At the end of its two-day policy meeting on Wednesday, the US central bank raised its policy rate by 75 basis points for the third time, to a range of 3-3.25% 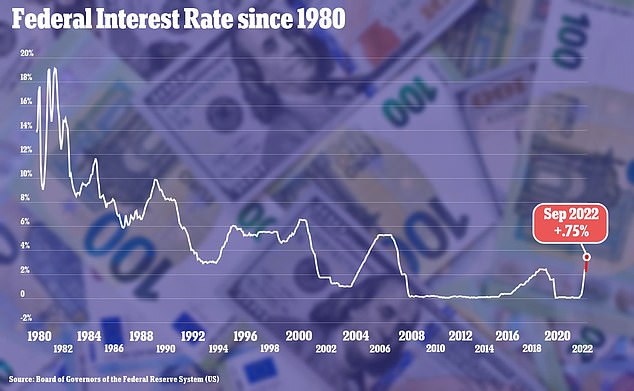 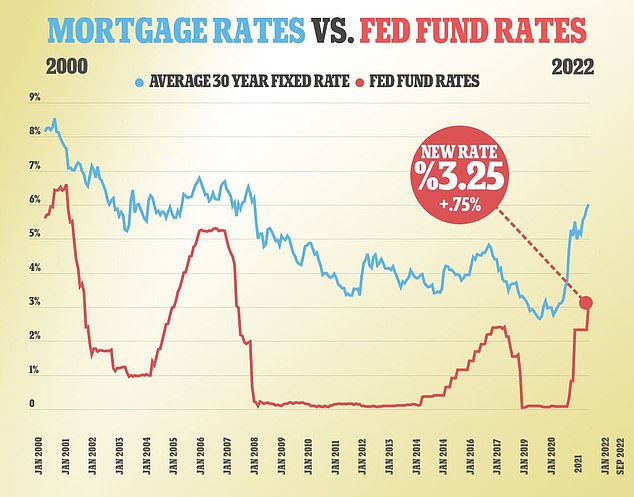 Last week, the average fixed mortgage rate topped 6 percent, its highest point in 14 years, meaning that rates on home loans are about twice as expensive as they were a year ago

The Fed’s new projections also showed its policy rate rising to 4.40 percent by the end of this year before topping out at 4.6 percent in 2023 — higher increases than economists and markets had projected.

Short-term rates at that level would make a recession likelier next year by sharply raising the costs of mortgages, car loans and business loans.

Wall Street’s main stock indexes slid in reaction to the projected rate increases, with the Dow Jones Industrial average swinging from positive territory to a loss of more than 180 points.

Earlier this month, Powell warned that Americans are in for ‘some pain’ ahead as the Fed works to end inflation, hoping to prevent what would otherwise be an even more dire outcome.

The Fed intends to use higher borrowing costs to slow growth by cooling a still-robust job market, controlling wage growth and other inflation pressures.

Yet the risk is growing that the Fed may weaken the economy so much as to cause a downturn that would produce heavy job losses. 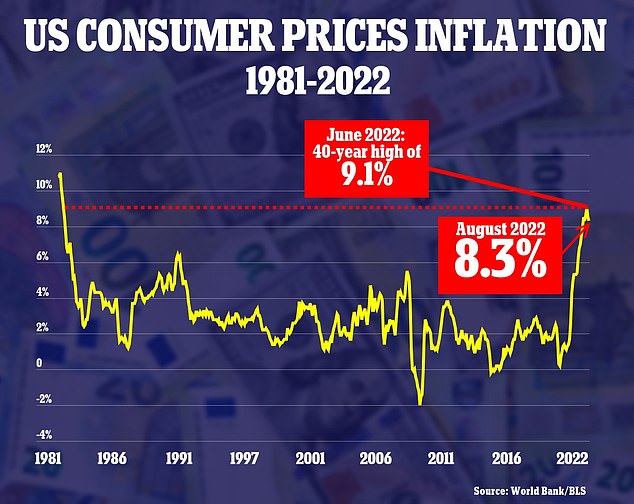 By raising its key short-term interest rate, the Fed is attempting to cool down the economy in order to tame rampant inflation, which remains stubbornly high at 8.3% in August 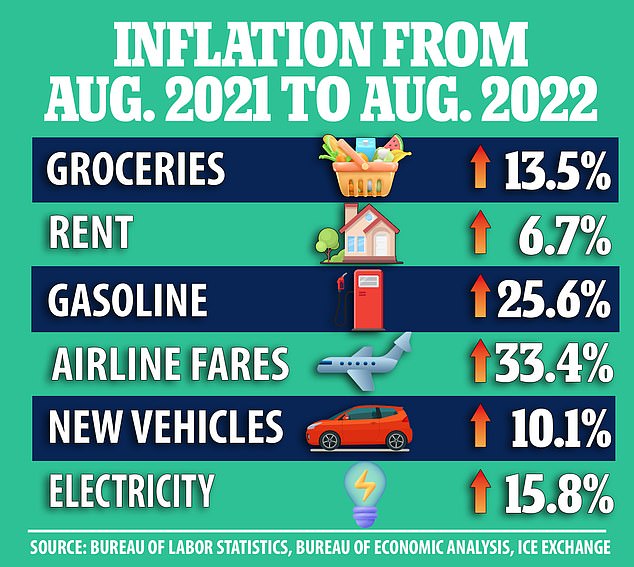 Despite the pain many Americans are feeling from inflation, the job market remains robust, with an unemployment rate near five-decade lows at 3.7 percent.

The economy has added nearly 3 million jobs since the start of the year, a surprisingly high number in the context of shrinking gross domestic product.

‘While the Fed is still likely to view a soft landing as a modal outcome, the window appears to be narrowing,’ Bank of America economists wrote in a note.

‘Recent Fed communications have acknowledged this, in part, by leaning more strongly in the direction of needing to slow labor markets and accepting the risks to activity that come with it.’

The economy hasn’t seen rates as high as the Fed is projecting since before the 2008 financial crisis.

Higher mortgage rates have already had a significant impact on the housing marking, with homebuying activity dropping off sharply this summer.

Credit card borrowing costs have reached their highest level since 1996, according to Bankrate.com. 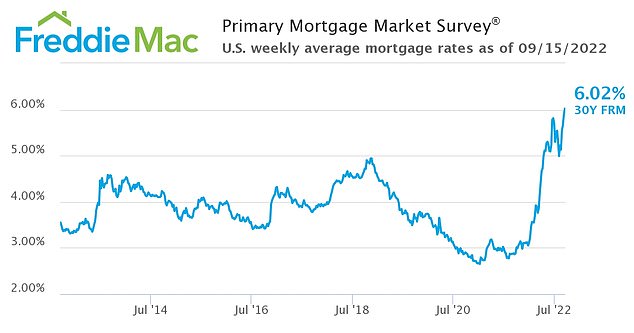 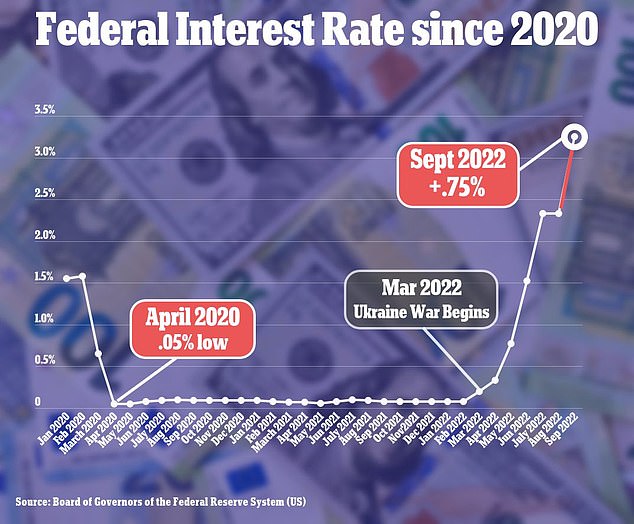 The Fed’s projected rate hike for September is seen above

Powell and other Fed officials still say the Fed’s goal is to achieve a ‘soft landing,’ by which they would slow the economy enough to tame inflation but not so much as to trigger a recession.

By last week, though, that goal appeared further out of reach after the government reported that inflation over the past year was a painful 8.3 percent.

The inflation report also documented just how broadly inflation has spread through the economy, complicating the the Fed’s task.

Inflation now appears increasingly fueled by higher wages and by consumers’ steady desire to spend and less by the supply shortages that had bedeviled the economy during the pandemic recession.

‘They’re going try to avoid recession,’ said William Dudley, formerly the president of the Federal Reserve Bank of New York. ‘The problem is that the room to do that is virtually non-existent at this point.’

The Fed’s rapid rate hikes mirror steps that other major central banks are taking, contributing to concerns about a potential global recession.

The European Central Bank last week raised its benchmark rate by three-quarters of a percentage point. The Bank of England, the Reserve Bank of Australia and the Bank of Canada have all carried out hefty rate increases in recent weeks.

And in China, the world´s second-largest economy, growth is already suffering from the government´s repeated COVID lockdowns. If recession sweeps through most large economies, that could derail the U.S. economy, too.

At his news conference Wednesday, Powell isn’t likely to drop any hints that the central bank will ease up on its credit tightening campaign. Most economists expect the Fed to stop raising rates in early 2023. But for now, they expect Powell to reinforce his hard-line anti-inflation stance.

‘It’s going to end up being a hard landing,’ said Kathy Bostjancic, an economist at Oxford Economics.

‘He´s not going to say that,’ Bostjancic said. But, referring to the most recent Fed meeting in July, when Powell raised hopes for an eventual pullback on rate hikes, she added: ‘He also wants to make sure that the markets don´t come away and rally. That’s what happened last time.’ 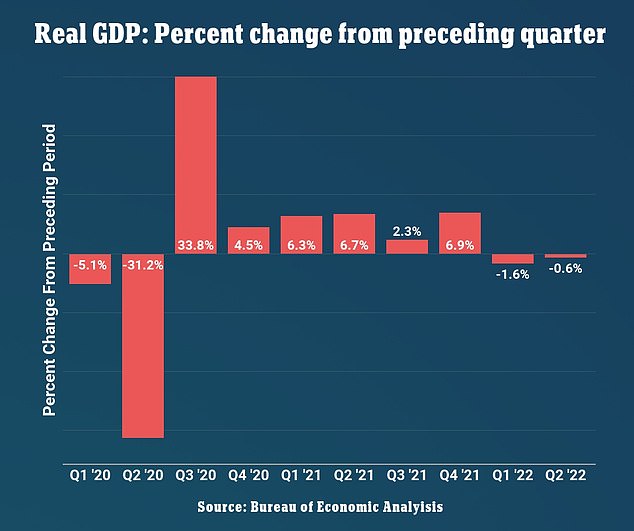 The U.S. economy shrank in the first two quarters of the year, meeting one definition of a recession. The White House cites a strong job market in saying there is no recession

Indeed, investors responded then by bidding up stock prices and buying bonds, which lowered rates on securities like the benchmark the 10-year Treasury. Higher stock prices and lower bond yields generally boost the economy – the opposite of what the Fed wants.

The central bank has already engaged in the fastest series of rate hikes since the early 1980s. Yet some economists – and some Fed officials – argue that they have yet to raise rates to a level that would actually restrict borrowing and spending and slow growth.

Loretta Mester, president of the Cleveland Federal Reserve Bank, and one of the 12 officials who will vote on the Fed’s decision Wednesday, said she thinks it will be necessary to raise the Fed’s rate to ‘somewhat above 4% by early next year and hold it there.’

‘I do not anticipate the Fed cutting’ rates next year, Mester added, dispelling the expectations of many investors on Wall Street who had hoped for such a reversal. Comments like Mester’s contributed to a sharp fall in stock prices last month that began after Powell’s stern anti-inflation speech at the conference in Jackson Hole.

‘Our responsibility to deliver price stability is unconditional,’ Powell said then – a remark widely interpreted to mean that the Fed will fight inflation even if it requires deep job losses and a recession.

Many economists sound convinced that a recession and widespread layoffs will be necessary to slow rising prices. Research published earlier this month under the auspices of the Brookings Institution concluded that unemployment might have to go as high as 7.5 percent to get inflation back to the Fed’s 2 percent target.

Only a downturn that harsh would reduce wage growth and consumer spending enough to cool inflation, according to the a paper by Johns Hopkins University economist Laurence Ball and two economists at the International Monetary Fund. 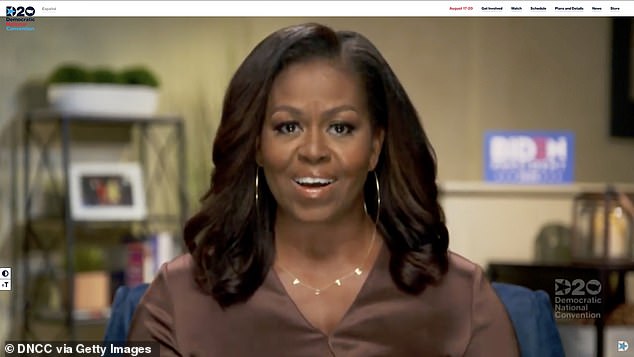 As admired as Michelle Obama’s Democratic National Convention speech was Monday night, it was her gold VOTE necklace that took center stage […] 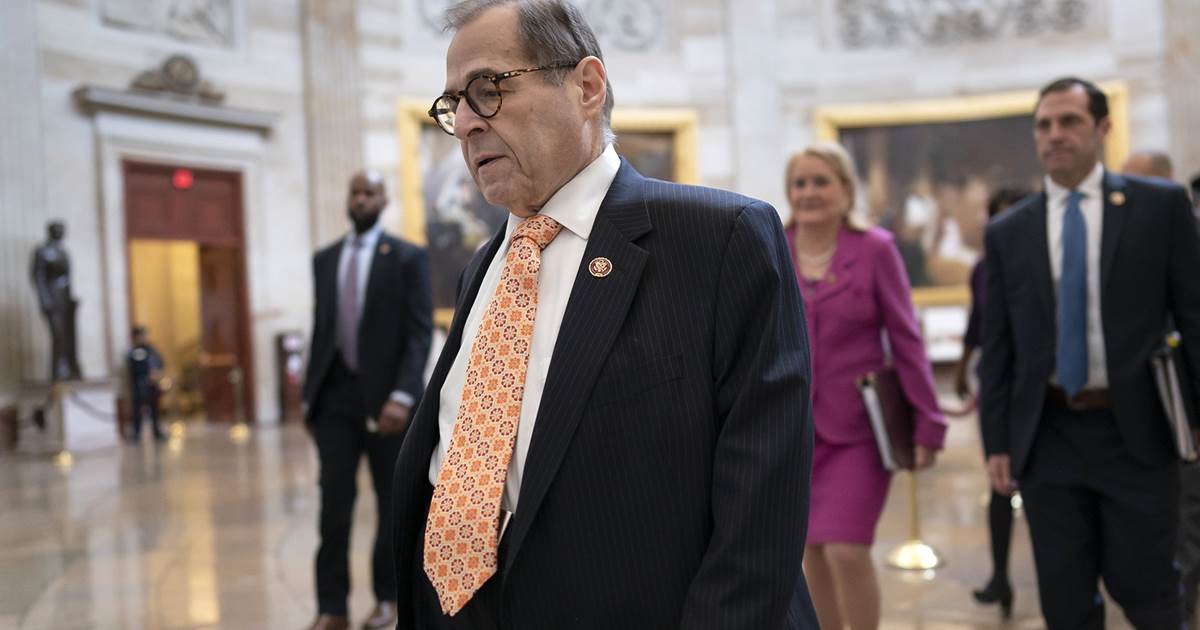 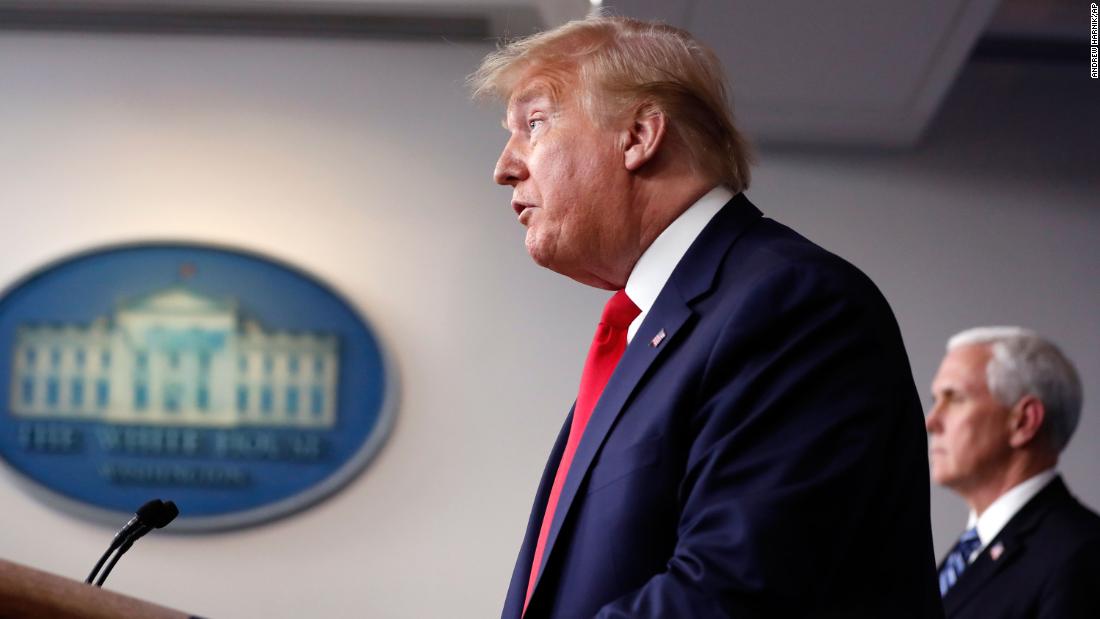 But one sentence in particular stands out as particularly damning for this President. Here it is: “Unfolding as it did in the […] 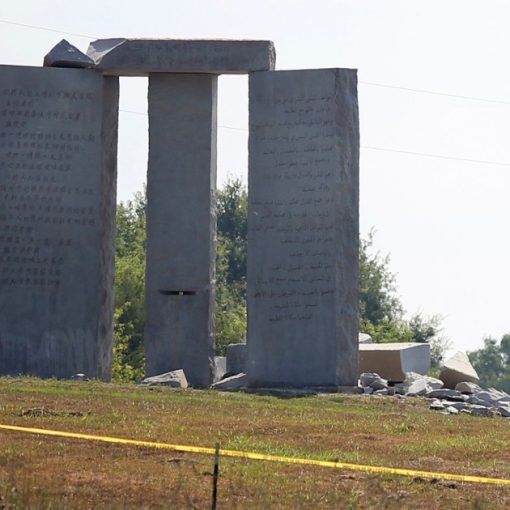 A Georgia prosecutor described the apparent targeting of a mysterious monument with an explosive device as an “act of domestic terrorism,” saying […]