Vinicius Jnr has vowed to continue dancing in his goal celebrations despite being targeted by a racist slur by an agent in Spain.

Pedro Bravo – who is the President of the Spanish Agents association – told Vinicius Jr to ‘stop playing the monkey’ after Real Madrid’s 4-1 win over Mallorca.

Bravo made the comment during an appearance on the controversial El Chiringuito TV programme before later retracting his statement.

Outraged at seeing dancing ‘criminalised’ by a figure on TV, Vinicius Jnr released a video where he said he has no plans to stop in the face of abuse.

‘They say that happiness bothers,’ Vinicius said in a video posted to social media.

‘The happiness of a victorious black Brazilian in Europe bothers much more.

‘But my desire to win, my smile and the sparkle in my eyes are much bigger than that.

‘You can’t even imagine it. I was a victim of a xenophobic and racist comment. But none of that started yesterday.’ 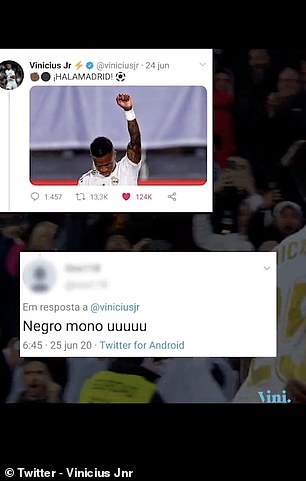 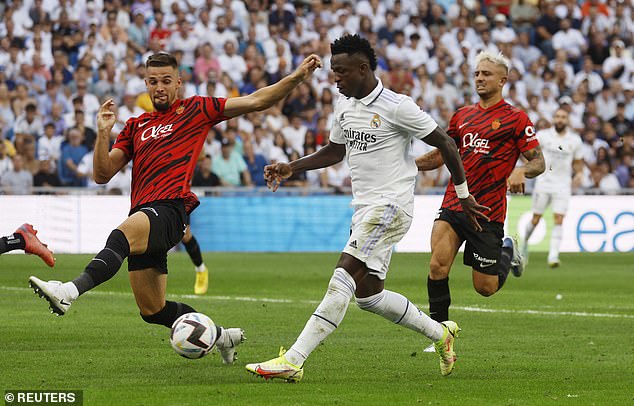 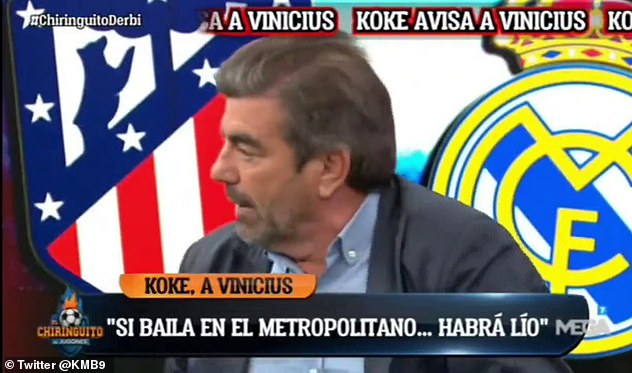 He added: ‘Weeks ago they began to criminalise my dances. Dances that are not mine.

‘Those are dances to celebrate the cultural diversity of the world. Accept it, respect it. I’m not going to stop.’

In their own statement, Real Madrid threatened they would take legal action on anyone who made racist or offensive remarks towards any of their players.

‘Real Madrid CF rejects all kinds of racist and xenophobic expressions and behaviors in the field of football, sport and life in general, such as the regrettable and unfortunate comments made in recent hours against our player Vinicius Junior,’ the Spanish giants said in a statement.

‘Real Madrid wants to show all its love and support for Vinicius Junior, a player who understands football as an attitude towards life based on joy, respect and sportsmanship.

‘Football, which is the most global sport that exists, must be an example of values ​​and coexistence.

‘The club has instructed its legal services to take legal action against anyone who uses racist expressions towards our players.’ 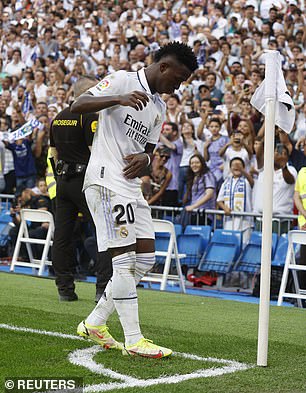 Plenty came out in support of Vinicius Jnr, not least Brazil icons Neymar and Pele.

Bravo compared Vinicius Jr’s behaviour to that of a monkey after the Brazilian winger performed his goal celebration dance against Mallorca on Sunday.

Whilst live on El Chringuito TV, Bravo said: ‘You (Vinicius Jr) have to respect the opponent.

‘If you want to dance, go to the sambadrome in Brazil. In Spain, you have to respect rivals and stop playing the monkey.’

He took to social media to post an image of himself and Vinicius dancing whilst on international duty with Brazil.

Neymar wrote to accompanying caption: ‘Dribble, dance and be yourself, happy to be who you are! Go for the top, my friend, we will dance on your next goal.’

Pele also took to Twitter shortly after the incident to support Vinicius. He wrote: ‘Football is joy. It’s a dance. It’s a real party.

‘Although racism still exists, we will not allow that to stop us from continuing to smile. And we will continue to fight racism this way: fighting for our right to be happy.’

Meanwhile, Newcastle star Bruno Guimaraes has called for a Spanish agent to be arrested for his comments. 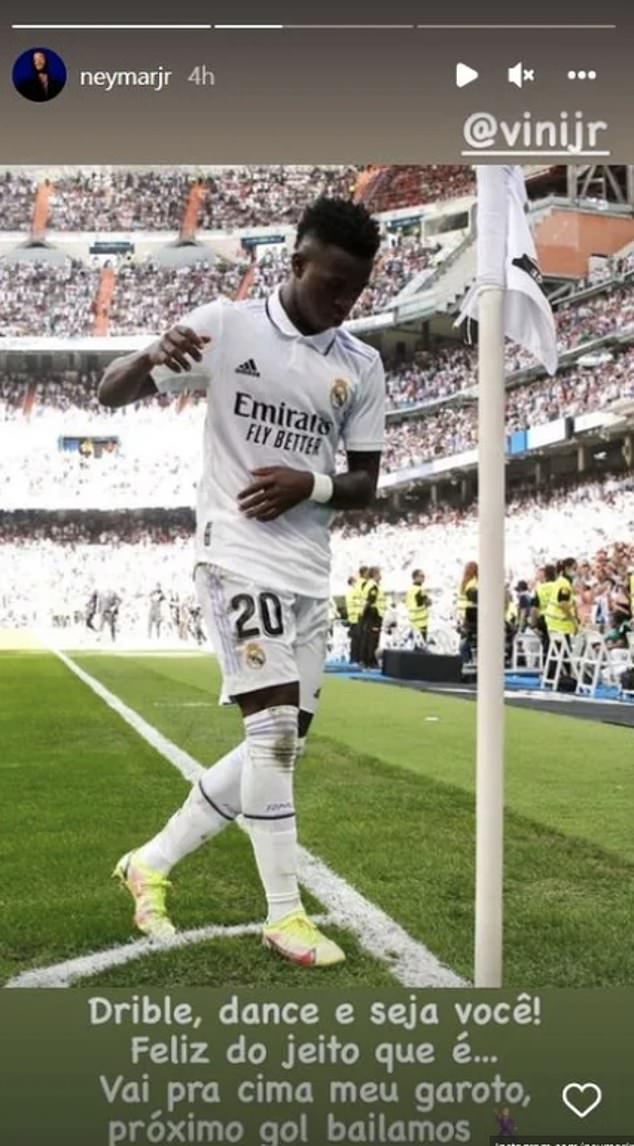 Neymar and Pele have both taken to social media to support the Real Madrid star. Neymar told Vinicius to ‘Dribble, dance and be yourself’ (above) after the racist comment 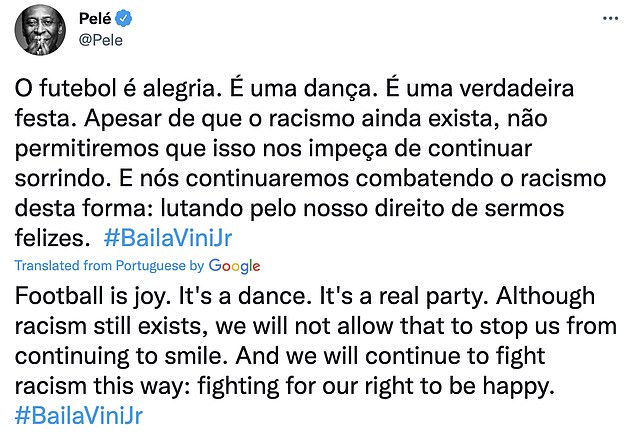 He wrote on Twitter: ‘This MORON needs to leave this place arrested! No excuses.

‘If a guy says this on live TV, just imagine what he says when he’s not. Inconceivable if this guy is not jailed.’

The Madrid-based agent has since apologised for his comments and claimed that he ‘misused’ the expression and that the statement was meant ‘metaphorically’.

‘I want to clarify that the expression ‘playing the monkey’ that I have misused to qualify Vinicius’ goal celebration dance was done metaphorically (doing stupid things).

‘Since my intention was not to offend anyone, I sincerely apologise. I am sorry!’. 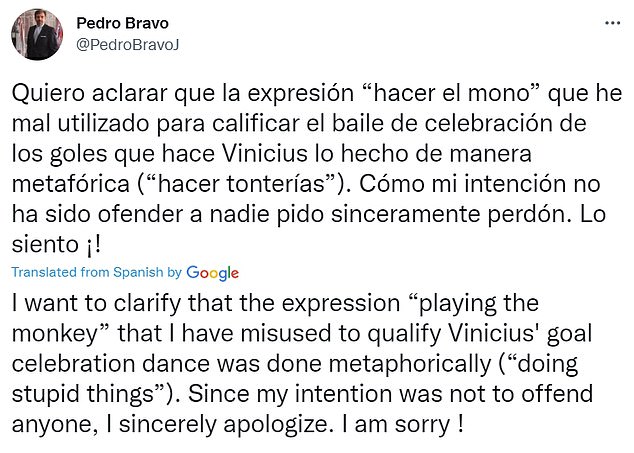 This is not the first time Vinicius has been subjected to racism. The Real Madrid forward said he suffered racist abuse during a Clasico clash against Barcelona in 2021.

Speaking about the incident, he said: ‘I think they deserve severe punishments, so they don’t do it again.

‘At the time I decided not to say anything because I was focused on the game.’

The forward was targeted by the home after scoring for Real Madrid. 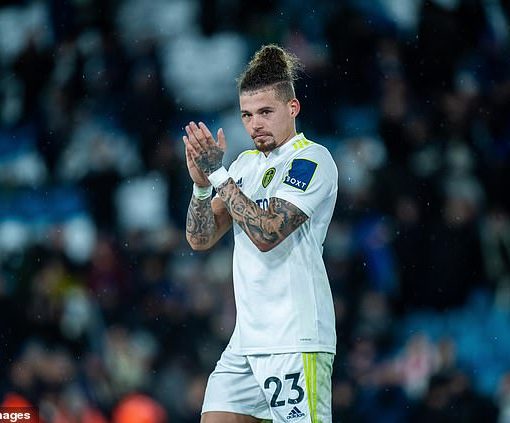 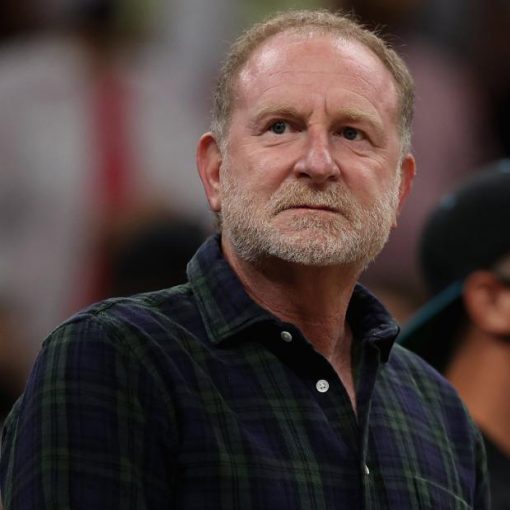 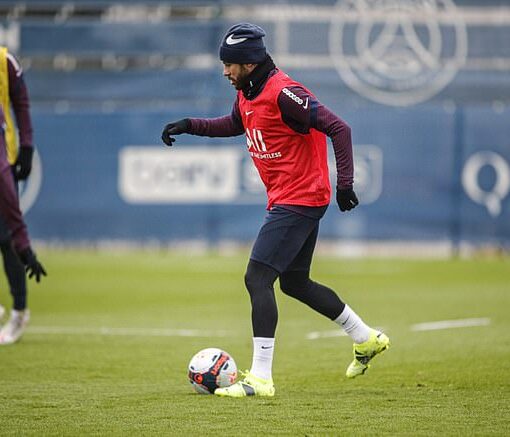 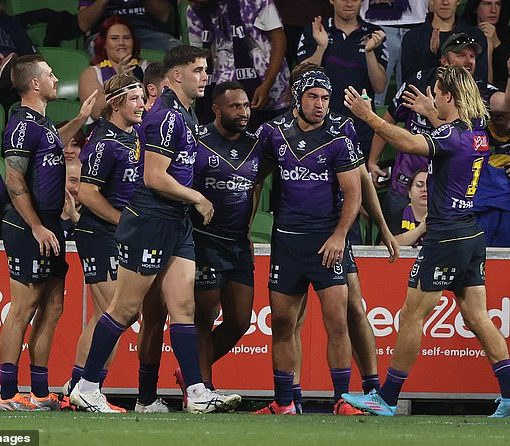