She doesn’t do things by halves, so it’s unsurprising Alysha Newman leaps out of a Cadillac Escalade, insistent on hugs rather than handshakes.

With a radiant smile that would melt ice in her native London, Ontario, and eyes which seem to glisten on cue, it may look like Ms. Newman has it all.

The 28-year-old has in some ways transcended the track and field world, and is on a mission to launch herself beyond a horizontal pole several meters in the air.

She desires to land herself on the podium, the map and the stage. Why?

Because she is a renaissance athlete, and a female one no less.

Unshackled by the social and gendered boundaries previously limiting, Newman embodies a new-age attitude, swagger and will for deconstructing convention.

The Canadian is a two-time Olympian, and Commonwealth Games gold medalist — winning in Australia’s Gold Coast in 2018, aged just 23. 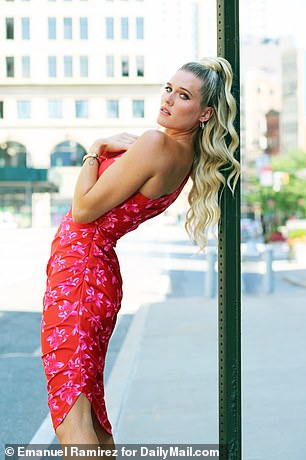 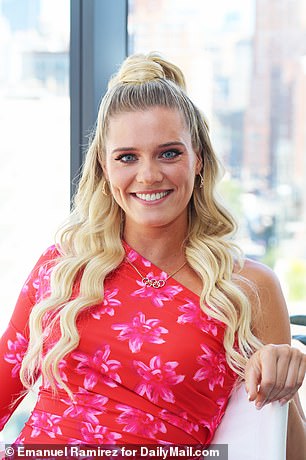 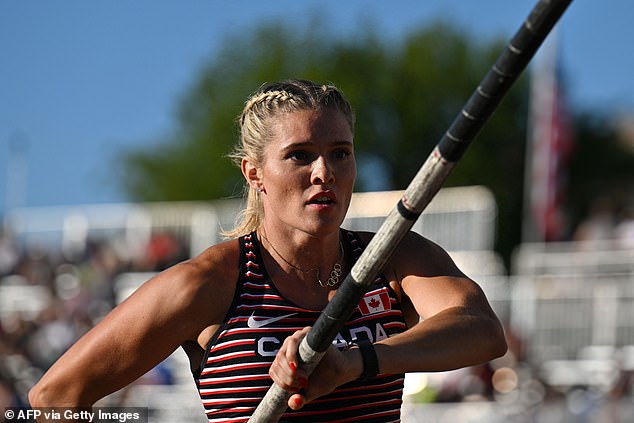 Statistically speaking, the 28-year-old is the greatest pole vaulter to be born across the border

Since, she has flirted with the summit of women’s pole vault, ranked third in the world for 30 weeks, but has yet been able to execute to her potential at an Olympics.

Though that is to come, she insists.

A gold medal is ingrained in her mind during consciousness and otherwise – we’ll explore that later – and Newman is on a quest to personify the potential of modern-day female athletes; capable of combining very important yet opposite ambitions.

Can it be done? Serena Williams didn’t think so, citing motherhood as an encumbrance – rather than a blessing – to becoming the female Tom Brady.

Can a female professional athlete – operating at a virtually peerless, global level – pursue their own athletic dreams, personal aspirations and maternal needs?

‘I want a family, I want a nice home, I want a medal,’ Newman exclusively told DailyMail.com in New York. 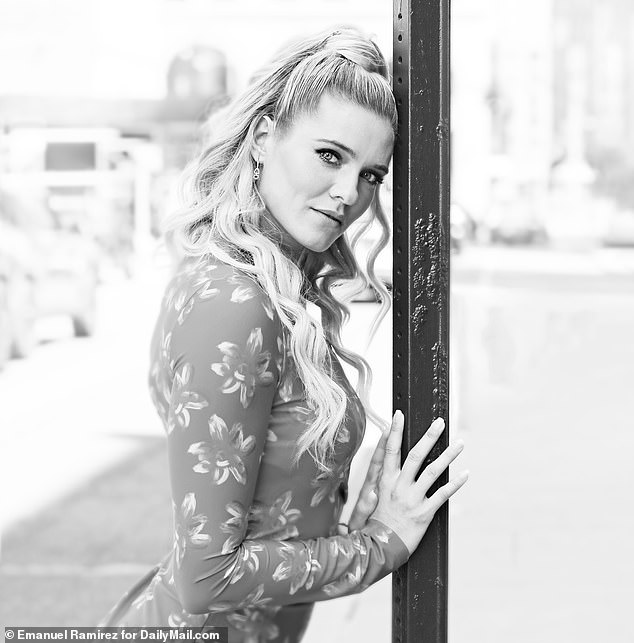 ‘I want to live a certain lifestyle. Why can’t I have it all? The only way we will know if I don’t have it all is when I die.’

Newman has a word of caution for anyone or anything who attempts to stifle her altruistic agenda.

‘I know what I want,’ she says assertively. ‘Don’t get in my way. Otherwise, I’m moving you out of my way.’

It may be mystifying to conceive, but there was a time she was bullied for her aesthetics. Admittedly, she no longer has a mushroom cut, braces or ‘four eyes’, but her reality is one in which she has conceived and achieved.

She has been the orchestrator of her contemporary identity, plotting her way to a point in which she could be who she wants.

For so long, she wasn’t truly the Alysha Newman sitting in this room.

‘I didn’t really have that until I made the Olympic team and just that, that OLY title became this sense of, “alright, we entered that world, we’re not done. But we’re finally where we need to be.”‘

Newman was wrapped in a self-contained cocoon, unadulteratedly focused on achieving her dreams. Only then, could she blossom into an enchanting, blue-eyed force of nature. 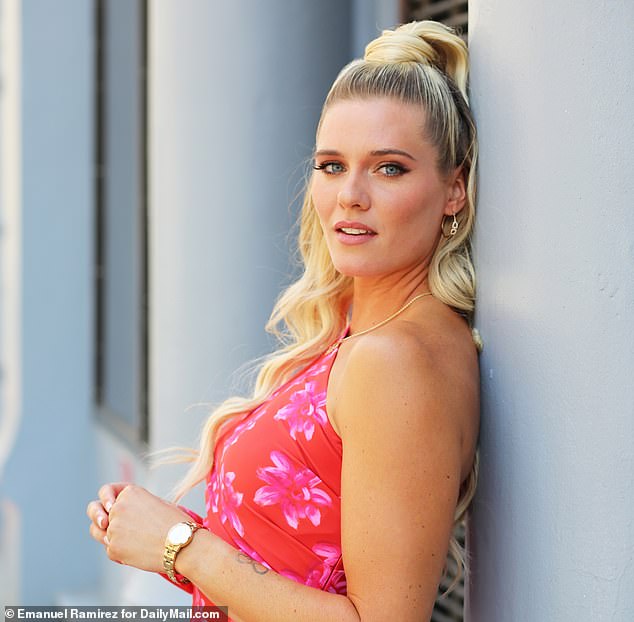 There is a natural saleswoman within the Canadian, evidenced in her participation in OnlyFans

She left her native Canada to dominate throughout college, claiming multiple pole vault records at Eastern Michigan and Miami.

Before graduating from the U, Newman produced the headline act of her career, winning a gold medal at the 2018 Commonwealth Games aged just 20.

Statistically speaking, she is the greatest pole vaulter ever to be born across the border, yet she is far more, and isn’t anywhere close to being finished.

Admittedly, Newman has struggled to perform on the Olympic stage, for a variety of reasons, but believes her tribulations – including a broken heel discovered following July’s Commonwealth Games – have positioned her precisely where she needs to be.

‘My successes don’t make me better,’ Newman explains. ‘My failures, my concussions, my injuries; that’s what teaches me lessons.

‘They allow me to stay motivated and I think people underestimate that. I really think it’s the whole reason I’m still in sport.

‘If I was the greatest of all time, I think I’d be like, “Oh, it’s good. I did it all, what else do I need? Let’s move on because I want to do more than just sports.”‘ 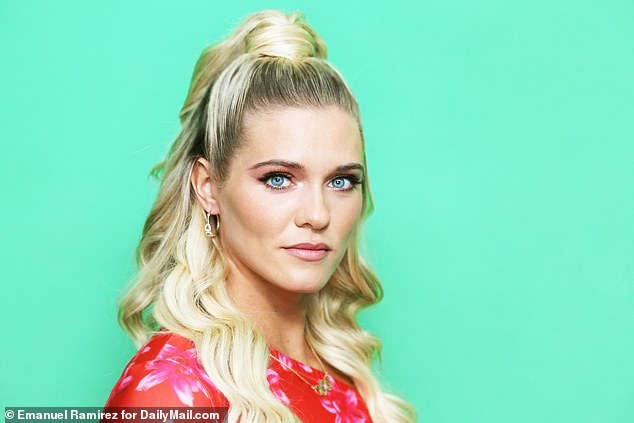 Newman traveled from Toronto to attend New York Fashion Week, such is her interest

Put simply, the light on track and field is too dim for Newman. This is not something she conveys directly and yet her charm and desire for broad excellence lend her to cast a wider scope.

There is a natural saleswoman within the Canadian, evidenced in her participation in OnlyFans.

Her very existence on the platform has made waves across the internet, which leads us to a fork along the road of empowerment.

In one mind, OnlyFans can be perceived as a vehicle for female disempowerment, despite its appearances; seeking the male gaze – and wallet – like a despairing Gotham yearning for the Bat-Signal.

From an opposing viewpoint, it is a woman taking control, seizing power and pressing over their image within a world in which sexualizes them, most certainly those in the public eye.

Within the latter is where we find Ms. Newman, who has capitalized on her growing fame and beauty, to strengthen a hold on how her body and being are viewed. 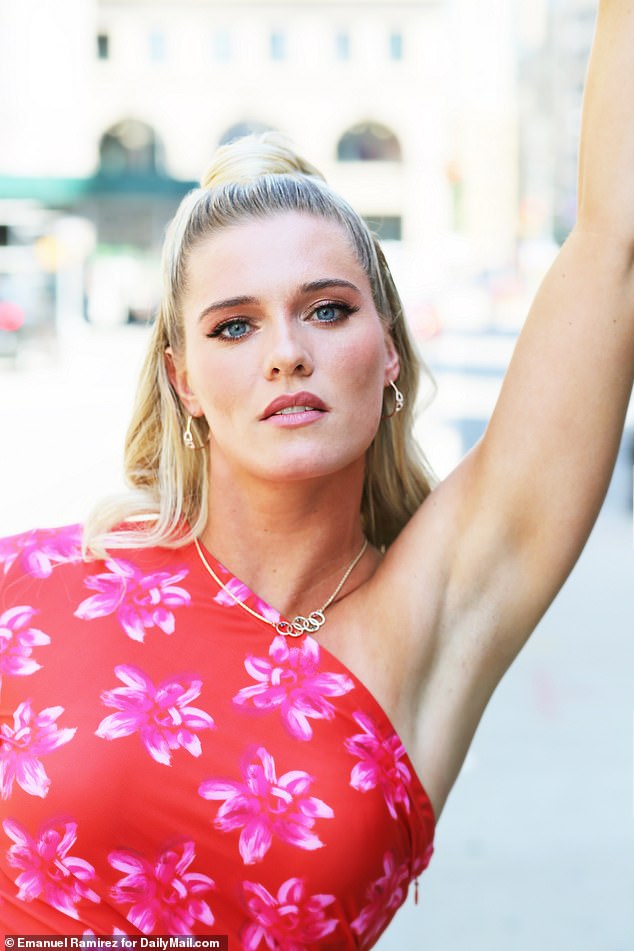 ‘Whether I liked it or not, I was sexualized in the sport naturally by what I wear, and my beauty,’ Newman explains.

‘If I showed up in full leggings and a sports bra that covered my stomach, people would still sexualize me. I mean, it just never stops.

‘When I decided to launch OnlyFans, it was really important for me to be a part of something I could control.’

Newman explains she is ‘not naked’ in any of her posts and uses the platform to connect with her true fans, taking them behind the scenes at the Olympics and into her life itself.

If she is to be freely sexualized during televised events, or on social media apps, why shouldn’t she control the content surrounding her and profit accordingly?

Her business nous doesn’t start and end there, Newman bristles with excitement as she brings up NFTs and the Metaverse. 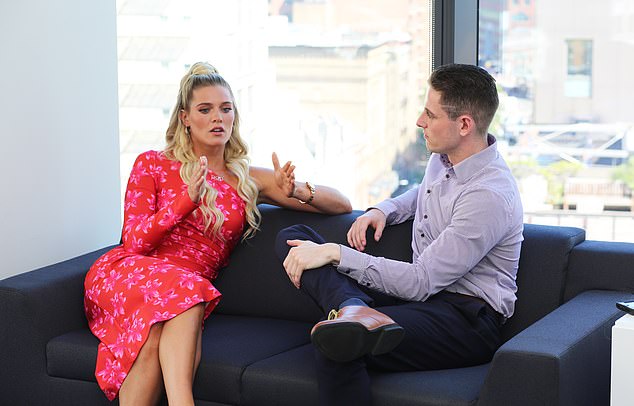 Canadian Olympian Newman tells DailyMail.com about her desire to succeed in various fields

In her mind’s eye she will be at the 2024 Paris Olympics with a camera attached to her jersey, creating an NFT whereby the lucky buyer can watch her jump live as she guns for gold.

It’s clear Newman has a wealth of interests, with fashion at the forefront. That is evidenced in her chic footwear, enthusiasm for modeling – posing with an ease as if that were her profession – and captivating Jonathan Cohen dress.

Newman traveled from Toronto to attend New York Fashion Week, such is her interest in the space.

If things continue to progress she could find herself in Paris with more to achieve than her ultimate dream.

Newman’s passive imagination has her subconscious positioning her on a podium in France. ‘O Canada’ scythes through the Parc de Princes speakers.

She has been here before, yet more specifically in Australia – in her dreams – prior to Commonwealth Games triumph, though the visions were interestingly absent prior to the Tokyo Olympics. 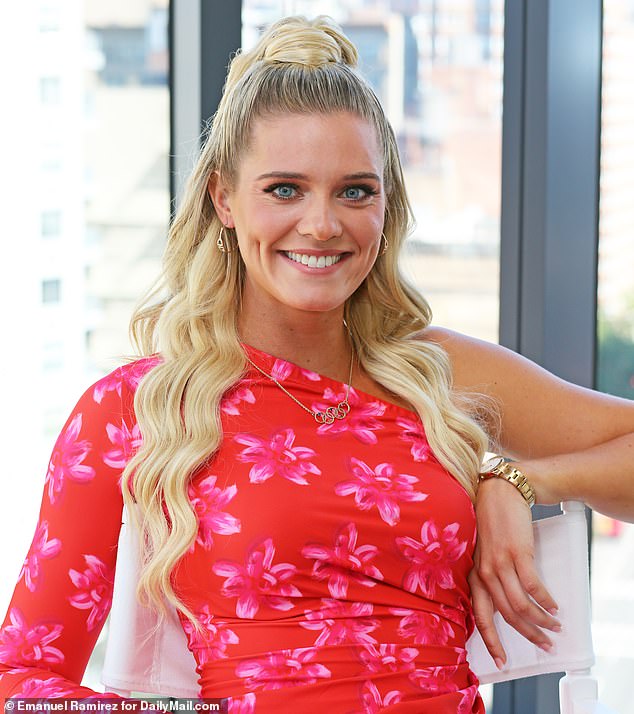 Newman is a fiercely driven, competitive woman who was treated unlike the archetypal girl

Newman’s mother, Paula, has tears cascading down her face, always without fail, as her daughter is handed the Games’ mascot – a caricatured baguette with what looks to be a bowler hat.

Almost everything else is blurred, Newman sees few faces, she is not crying after accomplishing her life’s work, rather laughing at the typically French mascot in her grasp.

Then she wakes, where her conscious dreams come to life.

Newman will be a mother, it is within her very fiber. If things were different she would already have established her own unbreakable bond between mother and child.

‘I just need somebody that’s going to be a good role model to my children. I would love somebody that’s been through experiences and adversity and not given everything, you know, I’m very attracted to people that have been underdogs.’

She also needs them to be ok with her ‘crazy soccer mom’ antics and the occasional acknowledgement of her medals. 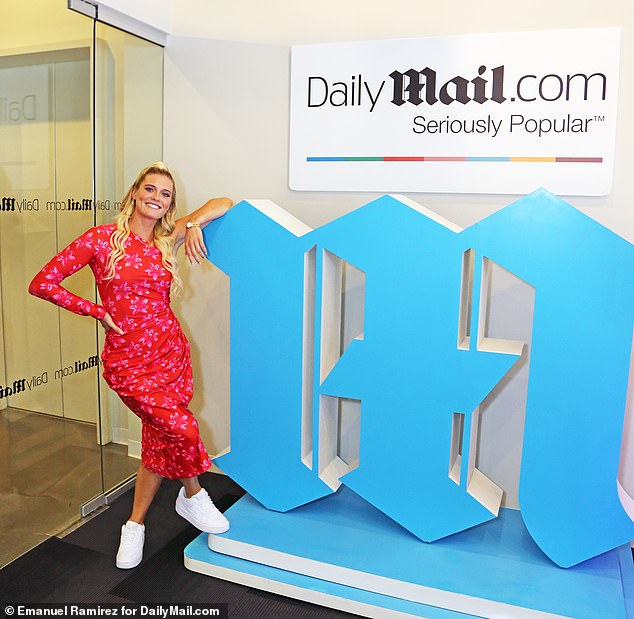 Newman speaks of her goals as if they have already happened, as if they are an inevitability

Newman is a fiercely driven, competitive woman who was treated as anything but an archetypal girl growing up.

She learned to dodge objects as she crawled, changed tires and spent time admiring the performance of male athletes because of their superior physicality.

Newman speaks of her goals as if they have already happened, as if they are an indubitable inevitability, as sure as night follows day.

It is with this sense of destiny she sets out to cement herself as a standout across various disciplines.

Admittedly, her star was born in a sport where recognizability exists every four years – if you’re fortunate.

A mere obstacle for a willing woman who clears them for her country, herself and womanhood. 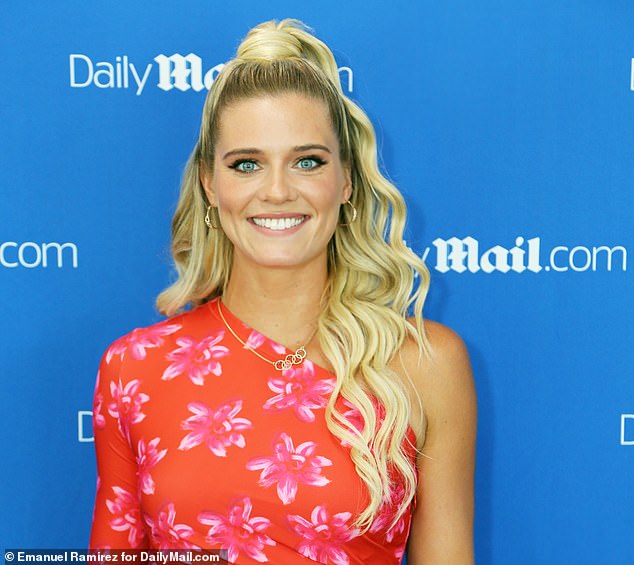 With a radiant smile that would melt ice, and piercing eyes , it may seem like Newman has it all

Bevan French was magnificent once again as Wigan recorded their first derby victory against St Helens in six attempts, leapfrogging their bitter […] 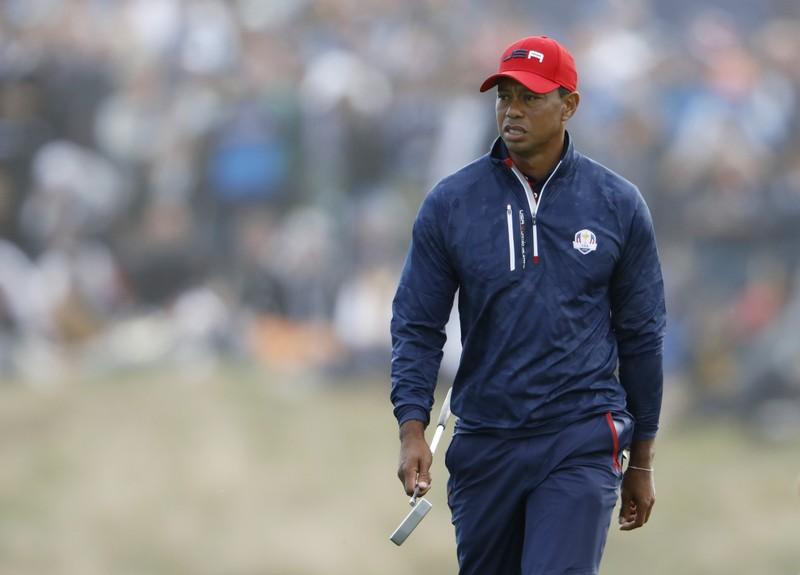 As he prepares to make his season debut at the Farmers Insurance Open this week at Torrey Pines in San Diego, Tiger […] 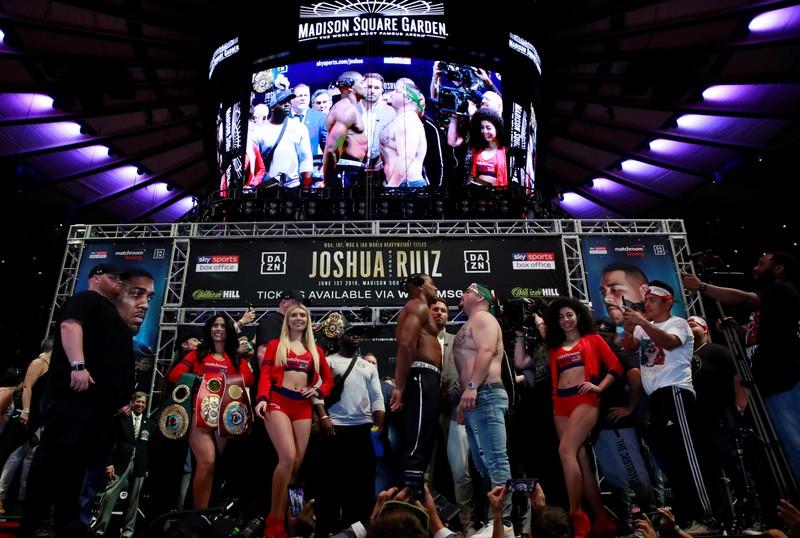 David Lengel Not to be crude, but if Los Angeles’ rally from a 3-1 NLCS deficit taught us anything about these Dodgers, […]