Great Britain crashed out of the 2022 Davis Cup in the group stage despite Glaswegian Andy Murray being thunderously backed by 5,000 fans in his home city. Murray teamed with Joe Salisbury and needed a doubles win against Wesley Koolhof and Matwe Middelkoop to keep his country in the competition. The British duo battled back after losing the first set tiebreak without winning a point and edged a 70-minute second set via another tiebreak, but they went on to lose 7-6, 6-7, 6-3 after almost three hours.

Team GB needed to beat the Netherlands in their doubles match having been beaten by the USA in their opening tie on Wednesday. Dan Evans got the hosts off to an ideal start with a straight-sets win over Tallon Griekspoor, winning 6-4, 6-4.

But the Netherlands levelled the tie as British No 1 Cameron Norrie lost 6-4, 6-2 to Botic van de Zandschulp at the Emirates Arena. And Murray and Salisbury went down in straight sets too as GB crashed out of the Davis Cup.

Hometown hero Murray had not played a competitive match in Glasgow since 2016, when he lost to Juan Martin del Potro in GB’s defence of their Davis Cup title. He and Salisbury started strong while being vociferously backed by the crowd, but their opponents battled back gamely.

While the Dutch pair were almost a double break down, they survived and from 4-3 down got back on serve and went on to win the first set with an emphatic 7-0 tiebreak triumph. That silenced the crowd and racketed up the tension among the home fans, though they only responded with even greater support.

GB, 10-time Davis Cup winners, needed to mount a second-set comeback to remain in contention to qualify for the knockout stages. That they did against Koolhof and Middelkoop – who had won 49 doubles matches in 2022 before this – to force a second tiebreaker of the match.

Former singles world No 1 Murray and Salisbury, the current doubles world No 1 who won the French Open and US Open in 2021, went from winning zero points in the first breaker to eight in the second to force a decisive third set. The arena went wild with Evans doing a lap of the court in celebration.

But the home crowd were ultimately left disappointed despite their ear-splitting volume. The two Dutchmen showed supreme mental strength to clinch the third set after two hours and 52 minutes, converting their first of three match points. They now progress to the finals in Malaga.

Evans was the only Briton to win on Friday but acknowledged the impact of the boisterous crowd on his performance. And he picked out one major positive of GB’s time in Glasgow despite their defeats to the USA and the Netherlands.

He said: “I think we’ve been incredibly lucky. We played so many ties, here or Braehead. When the Murrays are in the team, it’s an amazing thing for Scotland to be able to see that. They sort of took us in and really got behind the whole team. For me it’s the best place to play.

“But when we’ve had it at other places as well, Birmingham was an amazing atmosphere. That’s what we want, to be coming to play Davis Cup in front of a packed house. We’re lucky this week we get to play in Glasgow. It’s the best for me to play here with my friends in front of such a good crowd. I feel at home playing tennis here.

“You can hear the atmosphere. It’s amazing. There’s so many kids here this week. That’s not happened so much in the past. It’s been a bit of an older demographic. I think we’ve had a great influx. Kids stayed late the other night, are going nuts out there. I think that’s only positive for British tennis.”

GB face Kazakhstan in their final Group D game on Sunday – which is now a dead rubber – while the Netherlands face USA, the other country in the group who are also two wins from two, before then on Saturday.

Afternoon everyone and welcome to the biggest little fixture of England’s winter. It’s a mini-final in itself, the decider in a Twenty20 […]

Alexander Zverev is also safely away in the red group, after the German conquered Djokovic at the Tokyo Olympics before going on […] 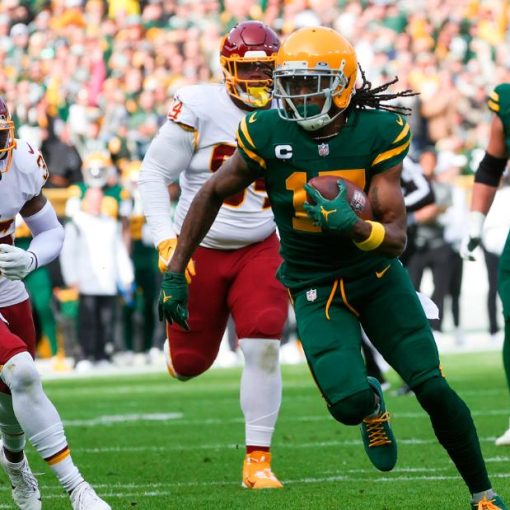 In exchange for the wide receiver, the Packers will receive the Raiders’ 2022 first and second round draft picks. Adams has also […]