Details have been published on how the public can attend the Queen’s lying in state, warning people that they can expect long queues and should be prepared to stand for many hours through the night.

Those wishing to pay their respects to the late monarch’s coffin in London’s Westminster Hall will be able to file solemnly past 24 hours a day from 5pm on Wednesday 14 September until 6.30am on the day of the funeral, Monday 19 September.

But the government has stressed that the queue will continuously move – with little chance to rest or sit down – and the long line of those waiting is expected to stretch through central London.

The plans for the lying in state form a major part of the official mourning. Here is what to expect over the coming days:

Victoria, named for Queen Victoria (the new King’s great-great-great grandmother) proclaimed the new sovereign at a ceremony at the state’s Government House in Melbourne this morning, Benita Kolovos reports.

The proclamation was jointly signed by Victoria’s governor, Linda Dessau, premier, Daniel Andrews, the chief justice, the president of parliament’s upper house and the speaker of the lower house.

Andrews confirmed in a statement following the ceremony that both houses of parliament will sit on Tuesday so that MPs can be sworn in under the new sovereign. This will be followed by condolence motions.

The parliament will then adjourn for one week as a mark of respect and return in late September.

Victoria is the only state or territory in which MPs are constitutionally required to swear allegiance to the new monarch following their predecessor’s death.

New Zealand will hold a national holiday for the passing of Queen Elizabeth, prime minister Jacinda Ardern has announced. The holiday will be a one-off, on Monday 26 September, the same day as the country’s State Memorial Service.

“As New Zealand’s Queen and much loved Sovereign for over 70 years, it is appropriate that we mark her life of dedicated public service with a State Memorial Service and a one-off public holiday,” Ardern said.

“Queen Elizabeth II was an extraordinary person and I know many New Zealanders will appreciate the opportunity to both mark her death and celebrate her life.”

The Queen will lie in state at Westminster Hall in London from Wednesday at 5pm until 6:30am Monday 19 September. Here’s what that means and how you can be involved.

What exactly is meant by the term “lying in state”?
Lying in state is usually reserved for sovereigns, current or past queen consorts, and sometimes former prime ministers. During the formal occasion, the closed coffin is placed on view, as thousands of people queue to file past and pay their respects.

When and where will the Queen lie in state?
The late monarch’s lying in state in Westminster Hall opens to the public at 5pm on Wednesday and it will be open 24 hours a day until it closes at 6.30am on Monday 19 September – the day of the Queen’s funeral. Westminster Hall is the oldest building the parliamentary estate, it dates back to 1099 and has been the site of key events, such as the trial of Charles I, coronation banquets, and addresses by world leaders.

What can people expect to see?
The closed coffin will be draped in a royal flag, usually a personal standard, and will rest on a raised platform called a catafalque, flanked by a military guard around the clock. A crown and other regalia are traditionally placed on top of a sovereign’s coffin. Each corner of the platform is watched 24 hours a day by units from the Sovereign’s Bodyguard, Foot Guards or the Household Cavalry Mounted Regiment.

For more information about what to bring, what not to bring, how long you might wait and where the tradition originated, see our full explainer here.

All of the UK papers led with the same image of the Queen’s coffin, draped in a flag, being carried into the Palace of Holyrood House in Edinburgh.

“The Queen begins her final journey,” said the Guardian across its main image of the pallbearers. However, the paper led on developments in Ukraine as Russia targets power supplies after being left reeling by Ukraine’s gains.

You can see a full papers roundup here.

Here is a day-by-day account of what will happen next, leading up to and including the Queen’s funeral on Monday 19 September.

Monday 12 September
King Charles III and the Queen Consort are to visit Westminster Hall in London where both Houses of Parliament will express condolences to the new monarch. Later on Monday, Charles and Camilla will fly to Edinburgh where they will attend a Ceremony of the Keys and the King will inspect the guard of honour.

Charles will then lead the royal family in procession as the Queen’s coffin is taken from the Palace of Holyroodhouse to nearby St Giles’ Cathedral for a service of thanksgiving. Members of the public will be able to view the coffin at the cathedral and pay their respects from 5pm for a period of 24 hours.

The King will then hold audiences with First Minister Nicola Sturgeon and Alison Johnstone, the Presiding Officer of the Scottish Parliament.

Later in the evening, the King and other members of the royal family will mount a vigil at the cathedral in honour of their mother.

Tuesday 13 September
The King and Queen Consort are to fly to Northern Ireland on Tuesday to visit Hillsborough Castle, where they will view an exhibition about the late Queen’s long association with the province. The King will then meet Northern Ireland Secretary Chris Heaton-Harris and party leaders, and receive a message of condolence led by the Speaker of the Northern Ireland Assembly.

After a short reception at Hillsborough, the King and Queen Consort will travel to St Anne’s Cathedral for a service of prayer and reflection. Before the event Charles will meet leaders from all the major faiths in Northern Ireland and then later the royal couple will return to London.

Meanwhile, the Queen’s coffin is expected to be flown to London and be placed at rest at Buckingham Palace.

A rehearsal for the procession of the coffin from Buckingham Palace to the Palace of Westminster is also expected to take place. Details about the route for the lying-in-state queue will be provided late on Tuesday September 13.

Wednesday 14 September
In a tribute to his late mother, the King will lead Wednesday’s procession behind the gun carriage carrying her coffin to Westminster Hall, where the Queen’s lying in state will begin before the state funeral on September 19. The Archbishop of Canterbury will conduct a short service following the coffin’s arrival.

Those wishing to pay their respect will be able to file solemnly past the Queen’s coffin 24 hours a day from 5pm on Wednesday September 14 until 6.30am on the day of the funeral – Monday September 19.

Senior royals are also expected to pay their own moving tribute, standing guard at some stage around the coffin – the tradition known as the Vigil of the Princes.

Thursday 15 September
Lying in state continues and a rehearsal is likely to take place for the state funeral procession.

Friday 16 September
The King and Queen Consort are expected to travel to Wales while lying in state continues.

Saturday 17 September – Sunday 18 September
The lying in state continues and heads of state will begin to arrive for the funeral.

Monday 19 September
There will be a national bank holiday to allow as many people as possible to watch the Queen’s funeral. Lying in state will continue until 6.30am. The coffin will be taken in a grand military procession from the Palace of Westminster to Westminster Abbey for the state funeral.

Senior members of the family are expected to follow behind – just like they did for the funeral of Diana, Princess of Wales and the Duke of Edinburgh.

The military will line the streets and also join the procession. Heads of state, prime ministers and presidents, European royals and key figures from public life will be invited to gather in the abbey, which can hold a congregation of 2,000.

The service will be televised, and a national two minutes’ silence is expected to be held. After the service, the coffin will be taken in procession from Westminster Abbey to Wellington Arch and then travel to Windsor. Once there, the hearse will travel in procession to St George’s Chapel at Windsor Castle via the Long Walk, after which a televised committal service will take place in St George’s Chapel. Later in the evening, there will be a private interment service with senior members of the royal family.

The Queen’s final resting place will be the King George VI memorial chapel, an annex to the main chapel – where her mother and father were buried, along with the ashes of her sister, Princess Margaret. Philip’s coffin will move from the Royal Vault to the memorial chapel to join the Queen’s.

Good morning and welcome to today’s liveblog, bringing you the latest developments since the death of the Queen.

King Charles III will lead the royal family in a poignant procession behind the coffin of his mother when it travels to an Edinburgh cathedral to allow the public to pay their respects.

The Queen’s coffin will be taken from the Palace of Holyroodhouse to nearby St Giles’ Cathedral where her family, and a congregation drawn from all areas of Scottish society, will attend a service of thanksgiving for her life.

Full details about the royal mourners have yet to be released but there is speculation the Duke and Duchess of Sussex and the new Prince and Princess of Wales, who on Saturday put on a united front during an appearance at Windsor Castle, will be part of the group.

Charles will lead some of the royals on foot, expected to be the Duke of York, Earl of Wessex, Princess Royal and her husband Vice Admiral Sir Tim Laurence – while the Queen Consort and other members of the monarchy will follow in cars.

Members of the public will be able to view the coffin to pay their respects for 24 hours before it is taken to London ahead of a period of lying in state.

Later in the evening, the King and other members of his family, likely his siblings, will mount a vigil at the cathedral in honour of their mother.

Charles and Camilla are in London, but before leaving for the Scottish capital they will visit Westminster Hall where both Houses of Parliament will express their condolences to the new monarch and his wife, and the King will give his reply.

During his day in Edinburgh, the King will inspect the guard of honour at the Palace of Holyroodhouse, before attending the ceremony of the Keys on the forecourt.

At the Palace, the King will hold audiences with the First Minister Nicola Sturgeon, followed by an audience with Alison Johnstone, the Presiding Officer of the Scottish Parliament.

Words of sympathy will be expressed by the Scottish Parliament when Charles and Camilla attend to receive a motion of condolence, with the King replying. 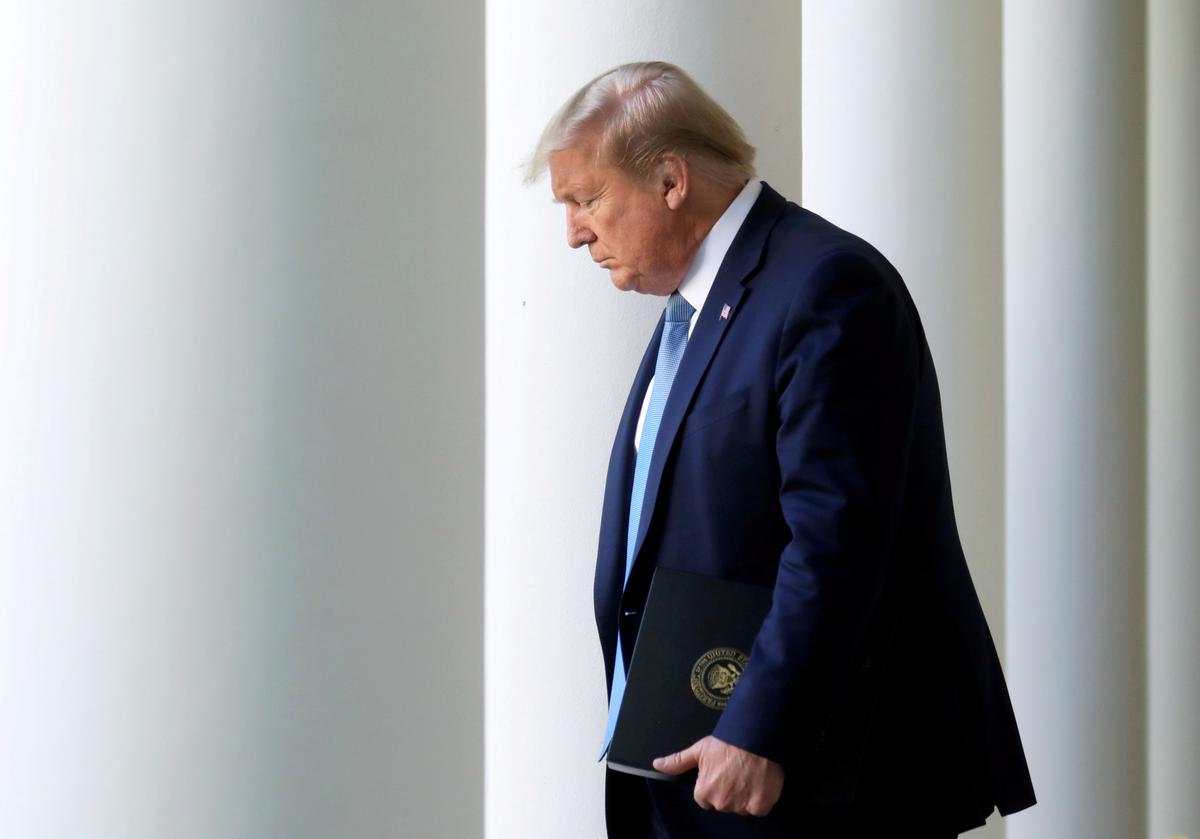 U.S. President Donald Trump arrives for the daily coronavirus task force briefing in the Rose Garden at the White House in Washington, […] 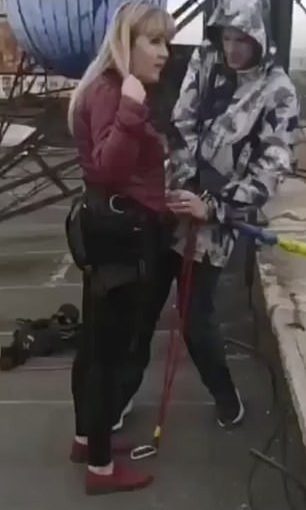 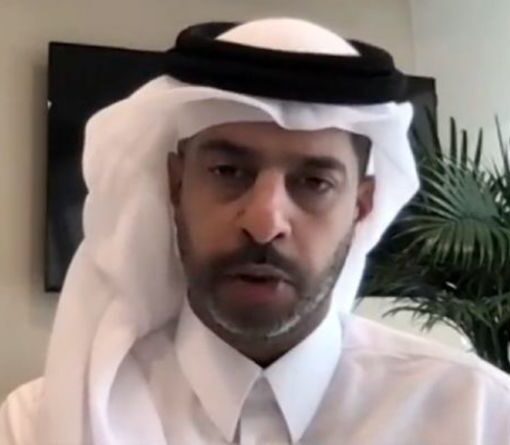