Vladimir Putin has taken a swipe at Britain and its ‘undemocratic’ election of Liz Truss in a rambling speech.

The Russian leader, whose legs twitched uncontrollably during the Eastern Economics Forum in Vladivostok today, made reference to the new prime minister’s election by a small group of Conservative members.

The strongman also bizarrely claimed that ‘we haven’t lost anything’ in Ukraine and said Russia ‘has not started military activities’ there despite already losing an estimated 50,000 troops.

On Truss, the dictator ironically said: ‘The people of Great Britain don’t take part, in this instance, in the change of government. The ruling elites there have their arrangements.’

Asked about prospects for ties with Britain, Putin said: ‘We know the Tories’ (Conservatives’) position on these questions, including on relations with Russia. It’s their business how to build relations with the Russian Federation. 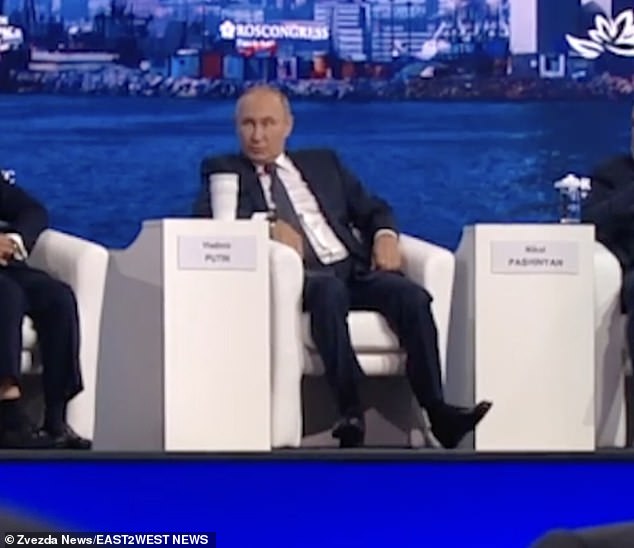 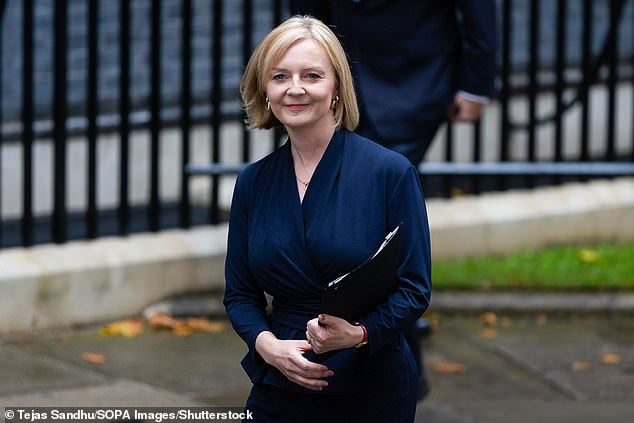 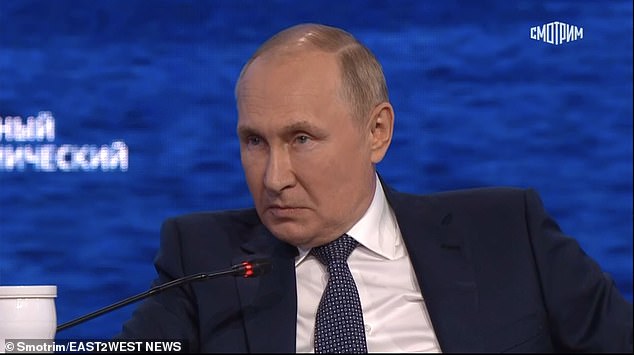 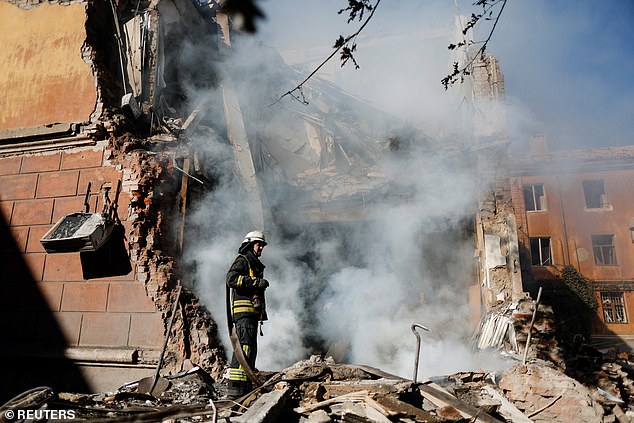 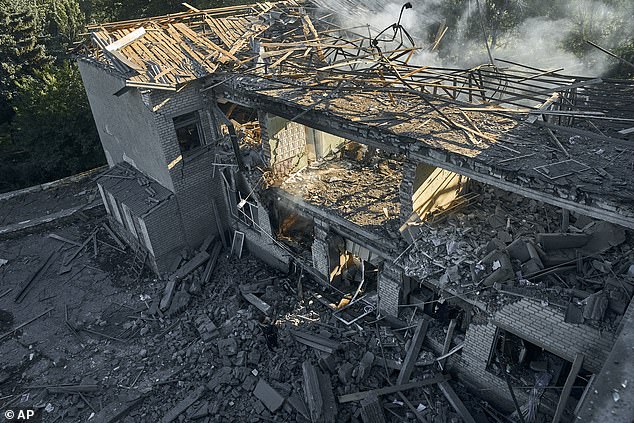 Rumours have been circling for years that Vladimir Putin is suffering from health problems, and they have intensified since he launched his brutal invasion of Ukraine.

Critics and Kremlin sources have indicated he may be suffering from cancer of Parkinson’s, supported by footage showing the leader shaking uncontrollably and gripping a table for support.

He has also disappeared from the public eye for weeks at a time, with suggestions he is undergoing surgery.

Another unnamed source suggested the operation was on Putin’s abdomen.

He said: ‘One is of a psycho-neurological nature, the other is a cancer problem.

‘If anyone is interested in the exact diagnosis, I’m not a doctor, and I have no ethical right to reveal these problems.

‘The second diagnosis is a lot, lot more dangerous than the first named diagnosis as Parkinson’s does not threaten physical state, but just limits public appearances.

‘Based on this information people will be able to make a conclusion about his life horizon, which wouldn’t even require specialist medical education.’

The Kremlin has consistently denied that there is anything wrong with Putin’s health.

In February, Putin was seen with a shaking hand as he firmly gripped the side of his chair for support.

The clip, which was taken on February 18, just before the onset of his invasion of Ukraine, shows him welcoming fellow strongman Alexander Lukashenko at the Kremlin.

He pulls his trembling hand into his body in an attempt to quell the shakes, but then he almost stumbles as he unsteadily walks towards Lukashenko.

Later, Putin sits on a chair but is unable to remain still, constantly fidgeting and tapping his feet while he grips onto the arm for support.

In a meeting with defence minister Sergei Shoigu, Putin’s poor posture and his apparently bloated face and neck fuelled the speculation.

Video showed Putin speaking to Shoigu whilst gripping the edge of the table with his right hand – so hard that it appears white – and tapping his foot consistently.

He has since been seen limping and shaking his hands and legs, further bolstering the rumours.

‘Our business is to defend our own interests and we will do that consistently, let no one be in any doubt about that.’

Truss is chiefly known in Russia for a visit she made to Moscow in February, when she and Foreign Minister Sergei Lavrov held a rancorous meeting, and she has regularly been the target of vicious sexist remarks on Kremlin TV.

During his remarks, Putin slouched in his chair as his legs constantly moved and he raised and wiggled his feet.

The leader has been at the centre of multiple health rumours in recent months and has regularly appeared twitching and unsteady while in public.

Multiple times in the past week, Putin has made similar gestures during his public appearance, fuelling the rumours about his ill health.

Questions about Putin’s wellbeing have been circulating for some time with some suggesting he has cancer or Parkinson’s and he has regularly disappeared for days at a time amid claims he is undergoing surgery.

But the rumours have grown stronger since he launched his barbaric invasion of Ukraine, with the leader often appearing to be not in full control of his limbs.

In recent months, he has been seen hobbling off a plane in Iran with a limp arm and twisting his foot in a meeting with Belarus dictator Lukashenko in May.

On Friday, he was seen squirming in his chair and looked ill at ease as he gripped an armrest with one hand before gesticulating with a tightly clenched fist, while the other hand clutched firm to the microphone.

On Monday, he tapped his feet on the floor and gripped his armrest while giving a bizarre speech to a group of young Russians.

There were claims he ‘complained to doctors about fatigue and shortness of breath’ on the trip to Russia’s far east.

And yesterday, Putin appeared to send himself and some of his officials to sleep during a state council meeting.

In other remarks today, Putin did not appear lucid as he rambled on about the war in Ukraine.

He said: ‘I think, I am certain that we haven’t lost anything – and will not lose anything.

‘On our achievements the main one is strengthening of our sovereignty which is the inevitable result of what’s happening now.

‘Of course, a certain polarisation is happening, too, but I believe both in the world and inside the country it would only be beneficial.

‘Because all things unnecessary, harmful, everything that prevents us from moving forward will be declined.

‘We would pick up the pace of development. Modern development can only be based on sovereignty. All our steps are aimed at strengthening our sovereignty.

‘And the most important, and I want to stress it one more time – we have not started from the military activities point of view. We are just trying to finish.’

He also tried to stoke up fury between Europe and Africa by claiming most of the grain leaving Ukraine ports after a blockade is reaching the EU rather than developing nations.

The comments would have been intended to shore up support from Africa by painting the West as ‘colonialists’.

Putin said: ‘Almost all the grain exported from Ukraine is sent not to the poorest developing countries, but to EU countries.’ 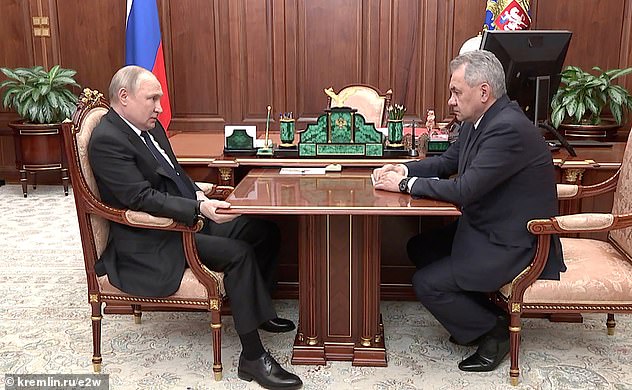 APRIL 21: Putin is seen gripping his desk with his right hand while meeting with Defence Minister Sergei Shoigu in the early stages of the war. The footage from the meeting raised questions about Putin’s health 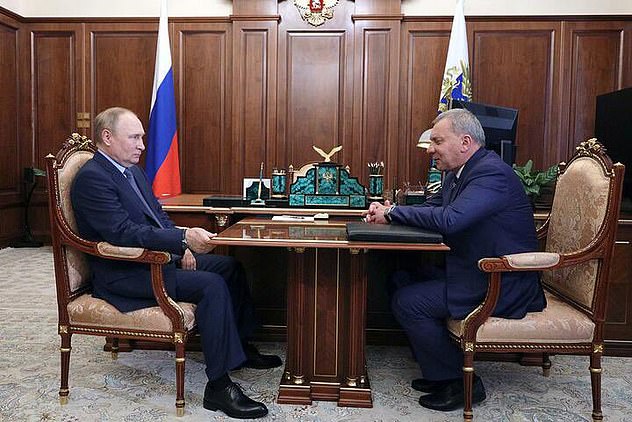 JULY 26: Putin, left, listens to Yuri Borisov, the CEO of Russia’s space agency Roscosmos, while he grips his desk with his right hand 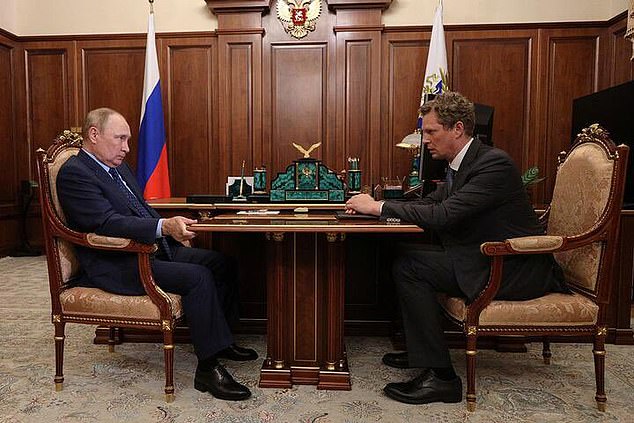 AUGUST 25: Vladimir Putin is seen gripping the same desk with his right hand during a meeting with Head of the Federal Taxation Service Daniil Yegorov 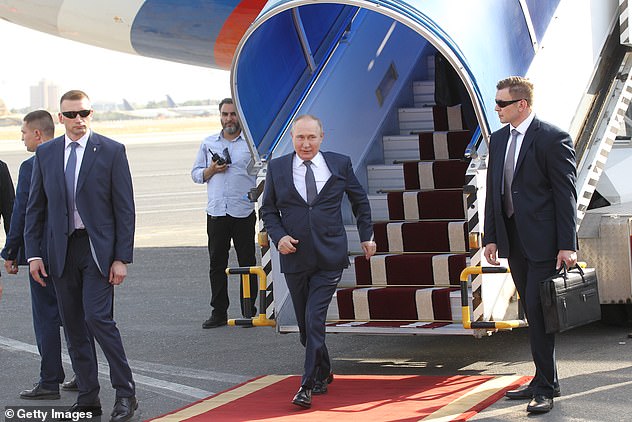 JULY 19: Russian President Vladimir Putin is seen hobbling from his presidential plane during the welcoming ceremony in Tehran

November 2012: Business trips and long-distance flights of the president are canceled, some of Putin’s meetings shown by the Kremlin turn out to be ‘canned food’

March 5 – 15, 2015: Putin does not appear in public, all meetings are ‘canned’ – in other words pre-recorded events were shown with the pretense they were in real time

August 9-16, 2017: The President, with journalists, visits Abkhazia and Sochi, and then for a week the Kremlin publishes only ‘canned food’

February 2018: In the midst of an election campaign, the president cancels public events. Peskov admits that the head of state ‘had a cold’

Ukraine, one of the world’s largest grain exporters, was forced to halt almost all deliveries after Russia started a military operation in late February.

Exports of grain across Black Sea ports resumed after Kyiv and Moscow in July inked a deal with the United Nations and Turkey acting as guarantors.

‘We did everything to ensure that Ukrainian grain was exported… we did it together with Turkey,’ Putin said at the forum.

Putin said European countries ‘acted as colonialists in recent decades and centuries’ and ‘they continue to act so today’.

He said they ‘once again simply deceived developing countries’.

‘With this approach, the scale of food problems in the world will only grow,’ Putin said, adding that it could lead to ‘an unprecedented humanitarian catastrophe’.

Putin also said today that Ukraine was threatening Europe’s nuclear security by shelling the Zaporizhzhia nuclear power plant and said Russia had no military equipment at the facility.

Putin said he trusted a report from the International Atomic Energy Agency (IAEA) which visited the power station last week, but criticised the IAEA for not saying that Ukraine was to blame for shelling on the site.

Kyiv and Moscow both blame each other for military attacks on the site which has triggered fears of a Chernobyl-style nuclear disaster at Europe’s largest nuclear power station. 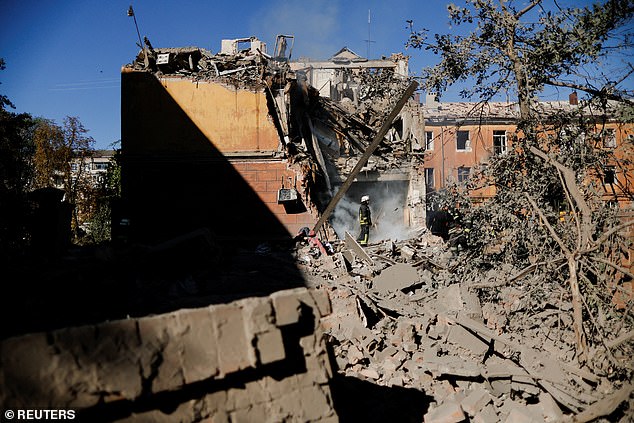 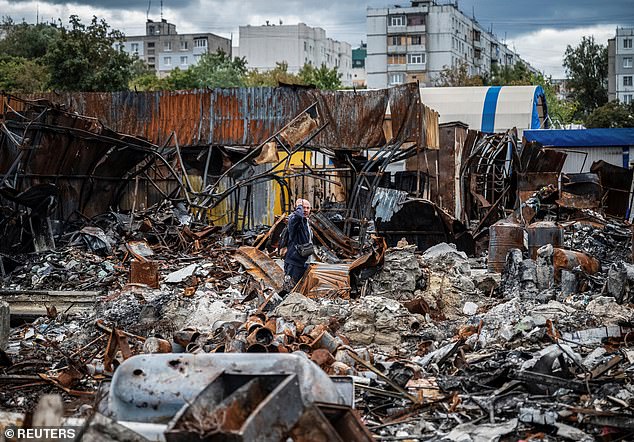 A local resident walks by a street market destroyed by military strikes, as Russia’s invasion of Ukraine continues, in Saltivka 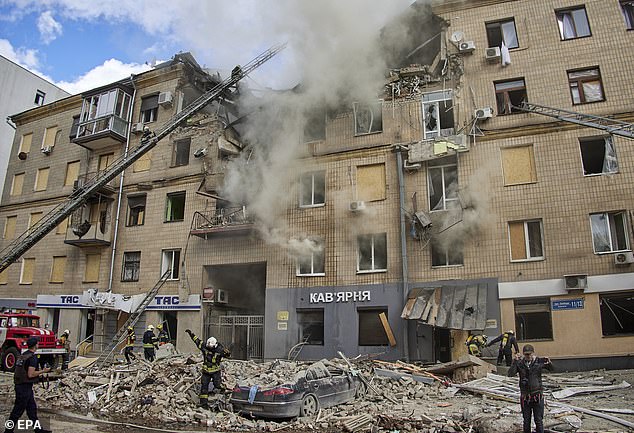 Putin told the annual economic forum in the far-eastern port city that the main goal behind sending troops into Ukraine was protecting civilians in the east of that country after eight years of fighting.

‘It wasn’t us who started the military action, we are trying to put an end to it,’ Putin said, reaffirming his argument that he sent troops into Ukraine to protect Moscow-backed separatist regions in Ukraine, which have fought Ukrainian forces in the conflict that erupted in 2014 following Russia’s annexation of Crimea.

‘All our action has been aimed at helping people living in the Donbas, it’s our duty and we will fulfill it until the end,’ he said.

He scoffed at Western attempts to cap prices for Russian oil and gas, calling the idea ‘stupid’ and saying that Russia will have enough customers in Asia.

‘The demand is so high on global markets that we won’t have any problem selling it,’ he said.

‘An attempt to limit prices by administrative means is just ravings, it’s sheer nonsense,’ Putin added. ‘It will only lead to a hike in prices.’

He rejected the EU’s argument that Russia was using energy as a weapon by suspending gas supplies via the Nord Stream 1 gas pipeline to Germany.

Putin reaffirmed the Russian argument that Western sanctions have hampered maintenance of the last turbine that remains in operation, forcing its shutdown.

He repeated that Moscow stands ready to ‘press the button’ and start pumping gas ‘as early as tomorrow’ through the Nord Stream 2, which has been put on hold by the German authorities. 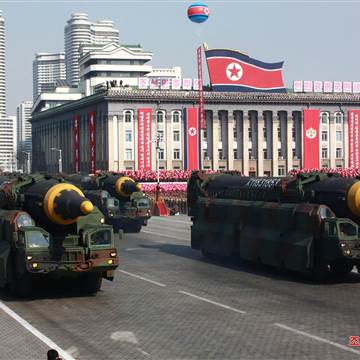 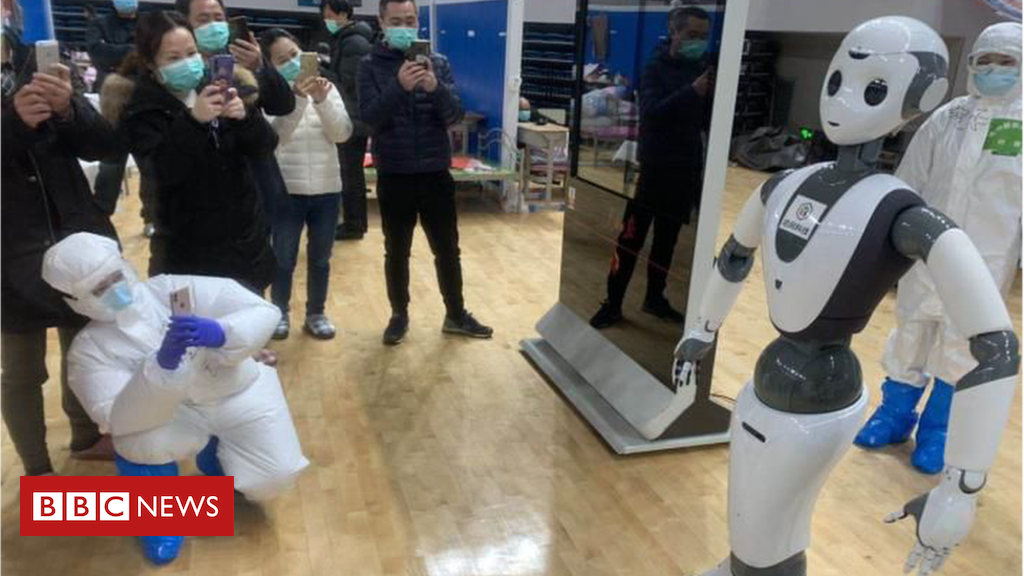 Image copyright Cloudminds Image caption The XR-1 at a hospital in China Since February, California-based manufacturer CloudMinds has shipped more than 100 […] 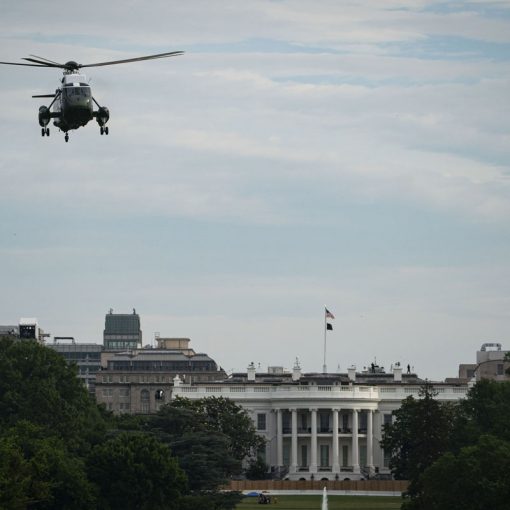