A Pennsylvania man was charged with the abuse of a corpse after he allegedly purchased human remains from a woman on Facebook.

Jeremy Lee Pauley, 40, who is known for purchasing various bones and teeth that he restores and resells, was arrested for trying to buy the corpse from a mortuary worker online.

Some of Pauley’s eerie purchases have included pelvis ‘antiques’ and ‘very old’ skulls from children.

Pauly allegedly purchased $4,000 worth of human remains from Candace Scott, who police say stole them from a mortuary partnered with the University of Arkansas.

The human remains included half a head, a whole head, three brains, a heart, a liver, a lung, two kidneys, a female pelvis, a torso with a nipple, and four human hands.

The shop owner was set to receive the shipment from Scott in Pennsylvania, but police intercepted the remains while they were in transit.

He was arrested on Thursday following an investigation that started on June 14 when police received a tip about Pauley’s suspicious activity and his collections. 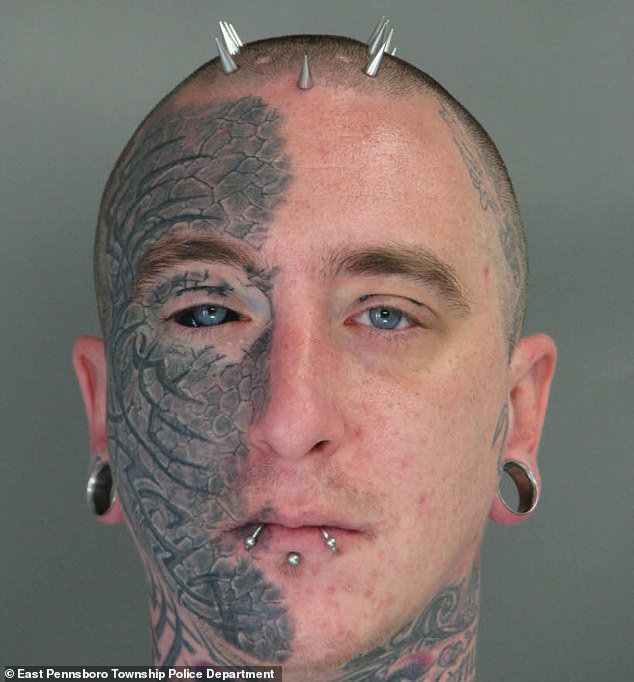 Jeremy Lee Pauley, 40, was arrested on Thursday for abuse of a corpse and receiving stolen property after purchasing human remains from a woman in Arkansas, according to police 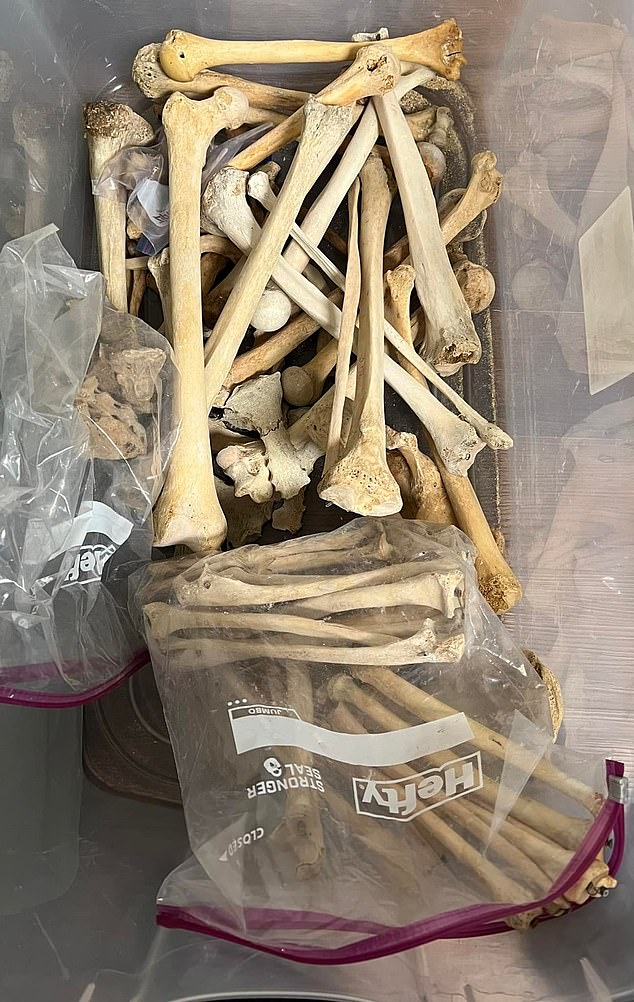 Pauley allegedly purchased the remains from a woman named Candace Scott for $4,000. The shipment included a liver, a lung, two kidneys, a female pelvis, a torso with a nipple, and four human hands. PICTURED: Pauley’s latest purchase of ‘medical bones’ before his arrest 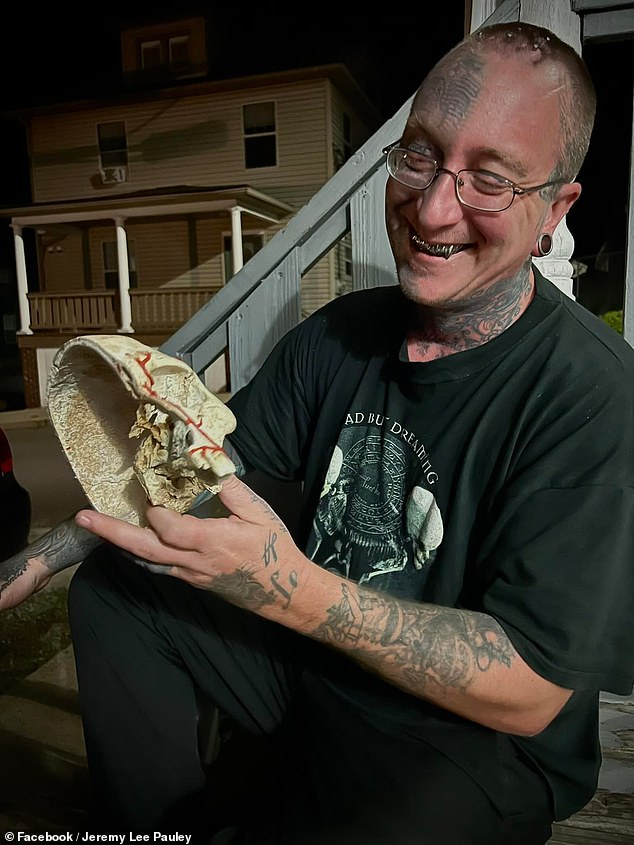 The store owner was set to receive the $4,000 shipment but was arrested on Thursday following an investigation beginning in June when police received a tip about suspicious activity about Pauley and his collections 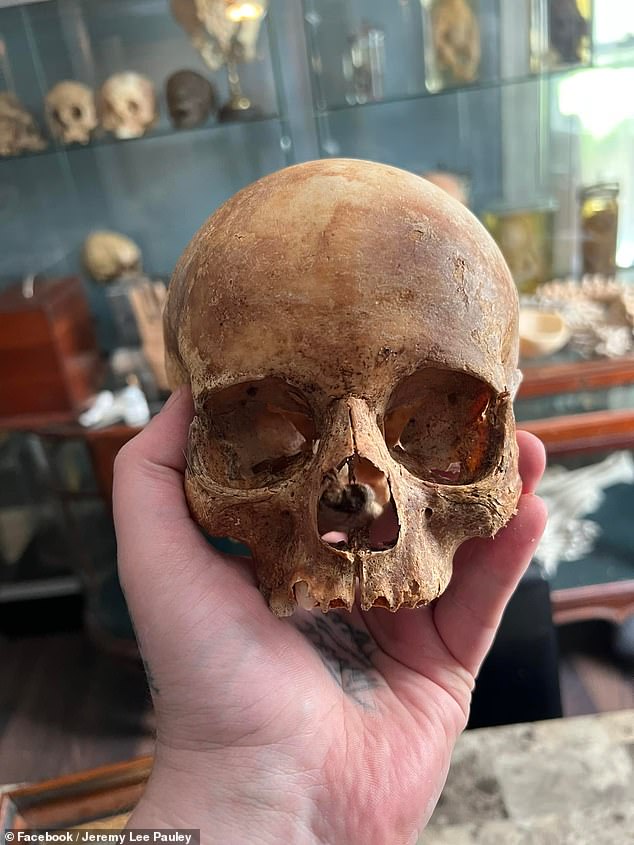 Some of Pauley’s other purchases have included ‘very old’ skulls from children. ‘Note the adult teeth haven’t dropped yet,’ he wrote on Facebook

Officers were astonished by the finding with Cumberland District Attorney calling the investigation ‘bizarre.’

Sean M. McCormack said: ‘This is the most bizarre investigations I have encountered in my thirty-three years as a prosecutor.

‘Just when I think I have seen it all, a case like this comes around.’

The caller that tipped off the police said they found ‘several’ five-gallon buckets of human remains in Pauley’s basement.

Meanwhile, a University of Arkansas spokesperson said the remains sold to Pauley were donated to the Medical Sciences sector of the school – but they were later stolen from the mortuary by an employee.

Spokesperson Leslie Taylor told CBS News. ‘We are very respectful of those who donate their bodies, and we are appalled that such a think could happen.’ 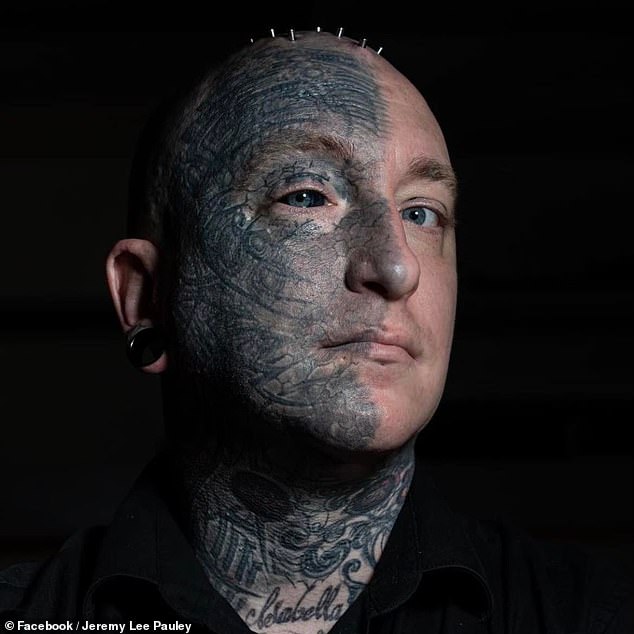 Pauley is the owner of The Grand Wunderkammer and the executive director and curator at The Memento Mori Museum. The business owner purchases multiple shipments of bones and teeth from unknown buyers and shares them with his supporters online 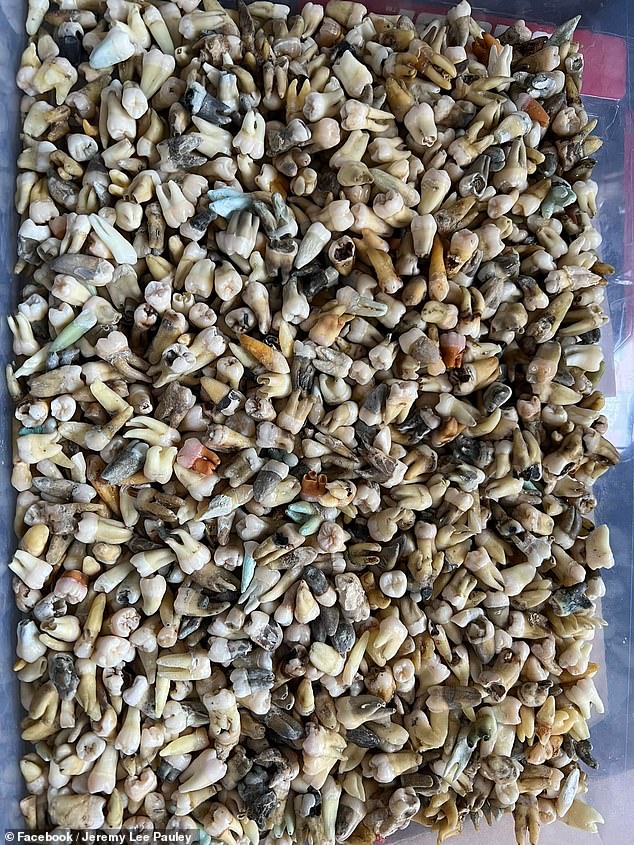 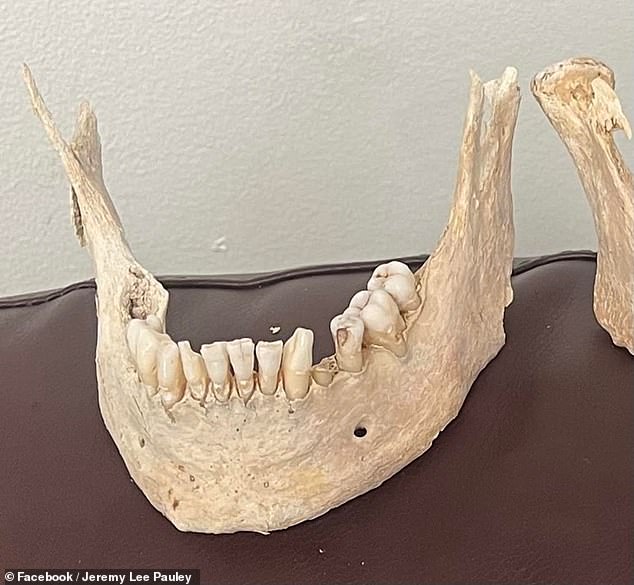 PICTURED: part of a mouth Pauley purchased before his arrest. The remains from Pauley’s basement were confirmed to be human body parts 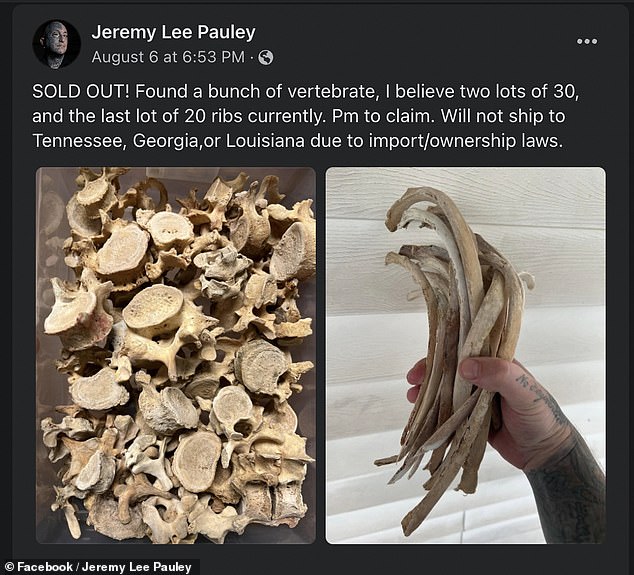 Pauley is the owner of The Grand Wunderkammer – a shop which sells ‘odd and unusual’ items to the public and to museum exhibits. He is also the executive director and curator at The Memento Mori Museum, according to his Facebook.

The bone-enthusiast’s bizarre collections have earned him a following online, with his near 6,000 Facebook supporters now wondering what will happen to him.

One supporter wrote online: ‘Chin up, you’re got a larger army of supporters than you think, my friend.

‘Those of us that know, know you’re solid.’

Others commented that they ‘still love and support’ Pauley and ‘appreciate everything’ he does for ‘the oddities community’ while noting that ‘plenty of people’ have ‘partial human skulls’ and teeth. 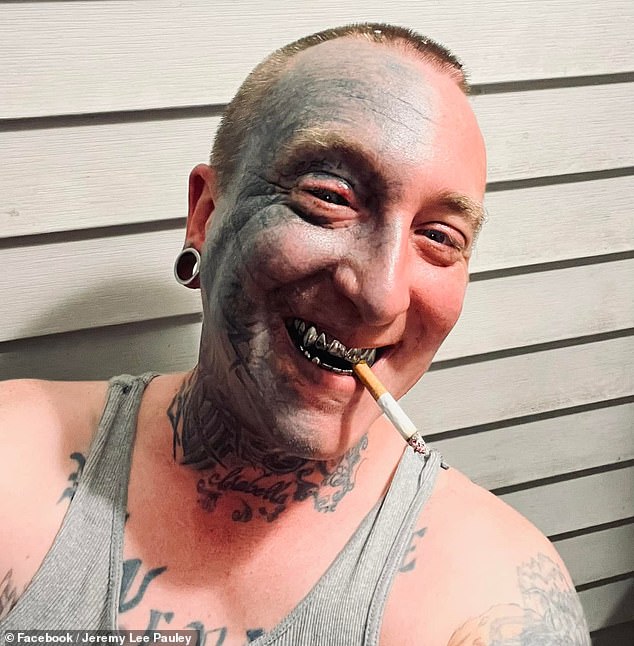 Pauley is the owner of the business, The Grand Wunderkammer. The Facebook business page describes it to be, ‘Strange, curious, and unique in every way possible!’

Pauley anticipates holding an event from his business on October 1. Now, supporters wait to see if it will happen. Multiple fans of Pauley have left Facebook comments on his page to express support through his arrest 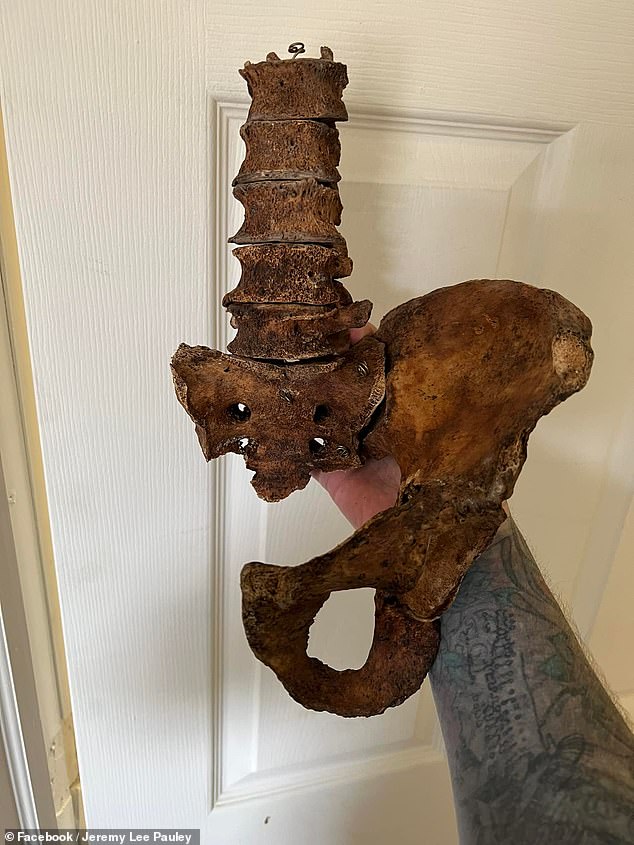 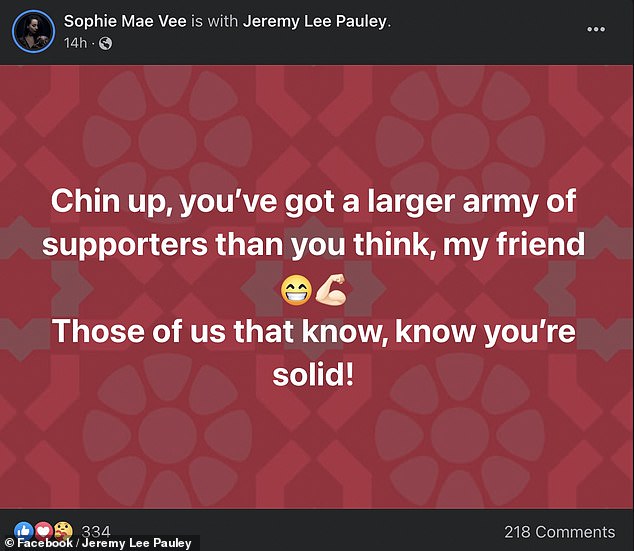 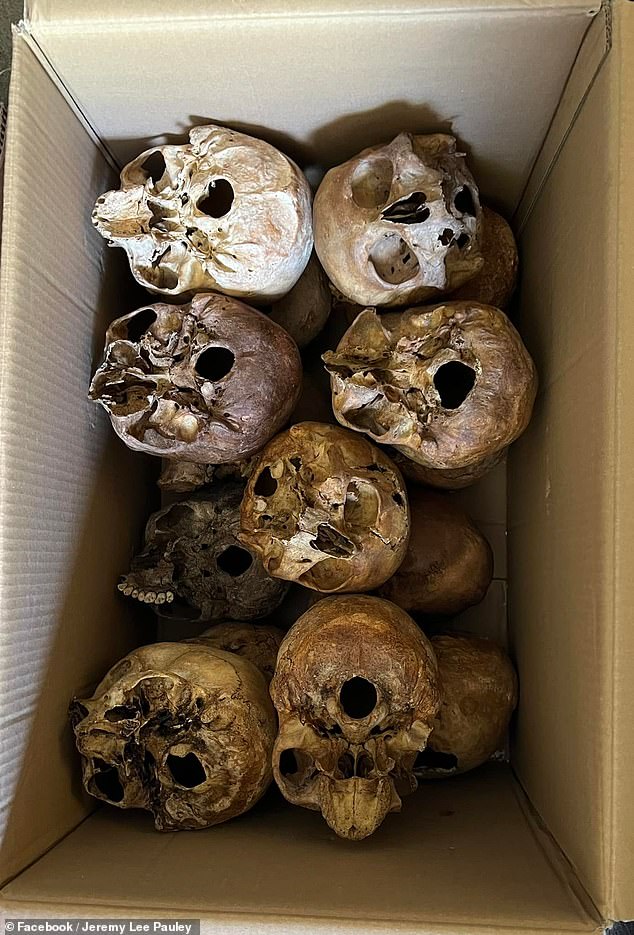 Pauley sold various skulls on Facebook due to popular demand. Some buyers asked if the store owner set up payment plans while others were disappointed that they didn’t have any money to purchase the bones

Pauley’s latest purchase was a plastic bin filled with medical bones he posted a few days before his arrest. He captioned the post, ‘Picked up more medical bones to sort through.’

A few days before on August 7, Pauley advertised and sold an ‘antique articulated partial pelvis with sacrum and 5 vertebrae.’

Other merchandised the shop owner sells are hundreds of bagged teeth – with some of them being stained ‘as a result of an old school disinfectant used back in the day,’ according to Pauley.

Skulls appear to be favorited among Pauley’s supporters with multiple asking if the shop owner does ‘payment plans’ for a box of a dozen skulls. 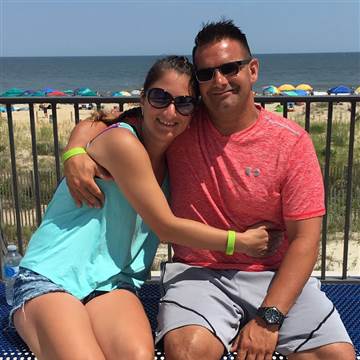 ALLENTOWN, Pa. — A Pennsylvania teenager who was missing for almost two weeks along with the 45-year-old man who frequently signed her […] The trade war has is having an impact on global markets (Image: GETTY) Germany, Japan, South Korea, the US and China are […] 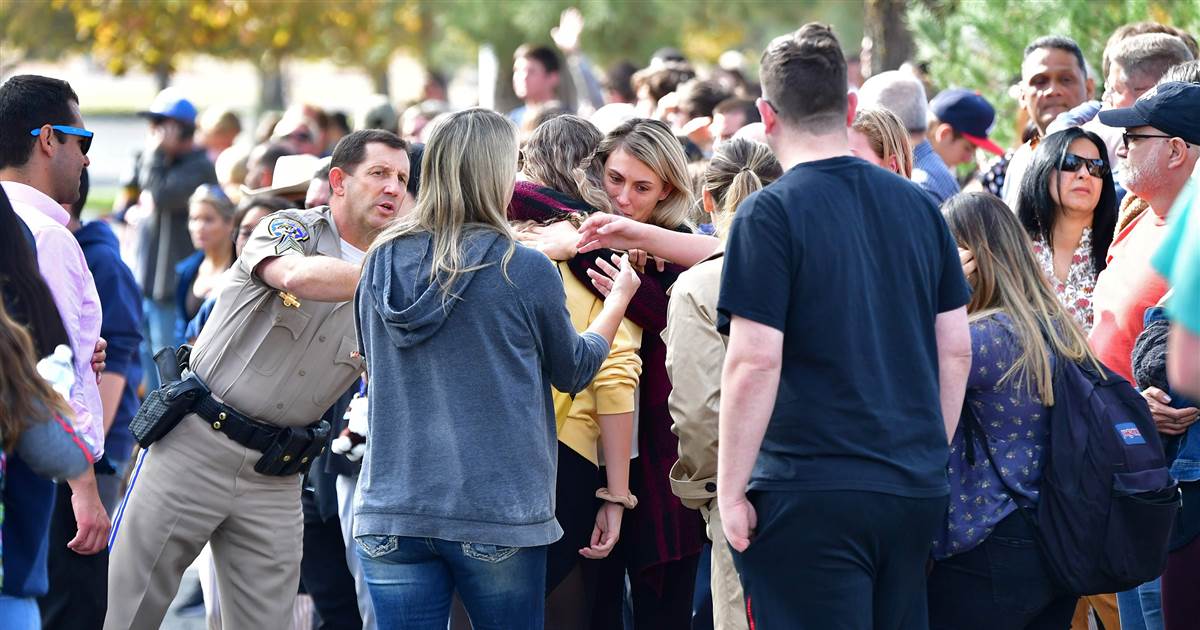 Good morning, NBC News readers. Students and parents in California are reeling today after yet another school shooting tragedy, the former ambassador […]