Shanna Moakler and her boyfriend, Matthew Rondeau, poured on the PDA during an outing to Dave and Buster’s Thursday in Los Angeles.

The 47-year-old former beauty queen and the 30-year-old actor put on a loving display as they played various games at the entertainment venue.

Moakler wore a pair of skinny jeans with a long sleeve  burgundy top. Her long blonde locks were styled straight. 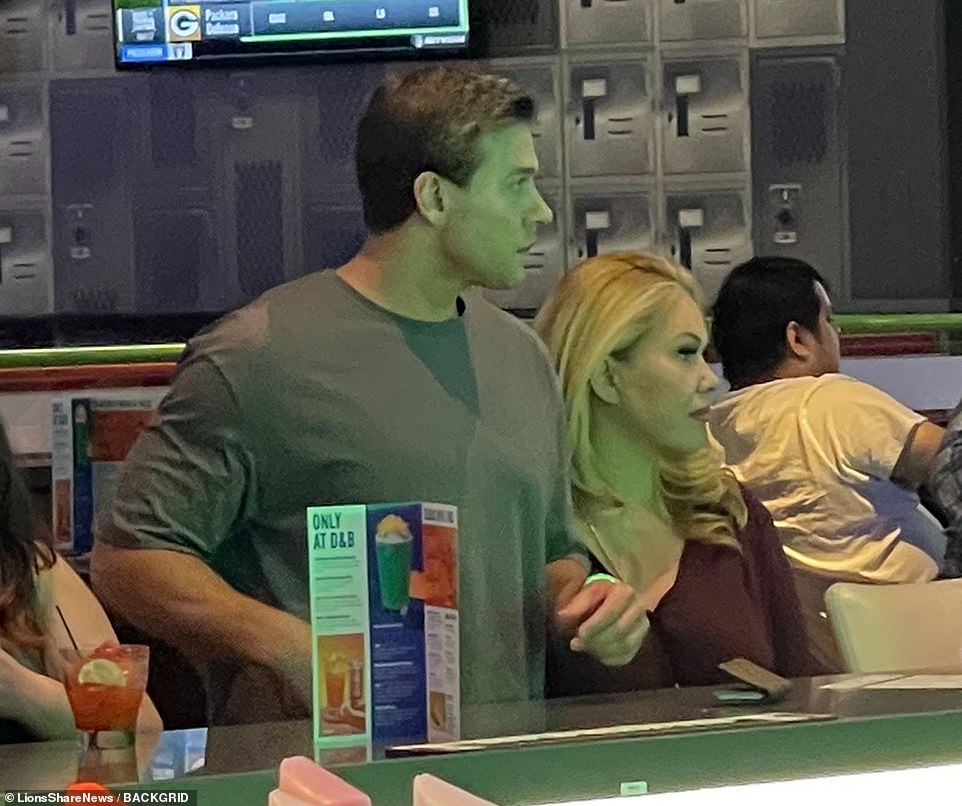 Date: Shanna Moakler,47, and Matthew Rondeau, 30, went out on a date hours after police were called to Moakler’s home to investigate a reported domestic disturbance

Rondeau looked casual in a pair of jeans and a gray t-shirt.

Some of their activities included shooting hoops, playing skee-ball and playing video games.

The affectionate display came a few hours after police were seen Moakler’s  Southern California home after her daughter called 911 to report a ‘domestic disturbance’ involving Moakler and her boyfriend. 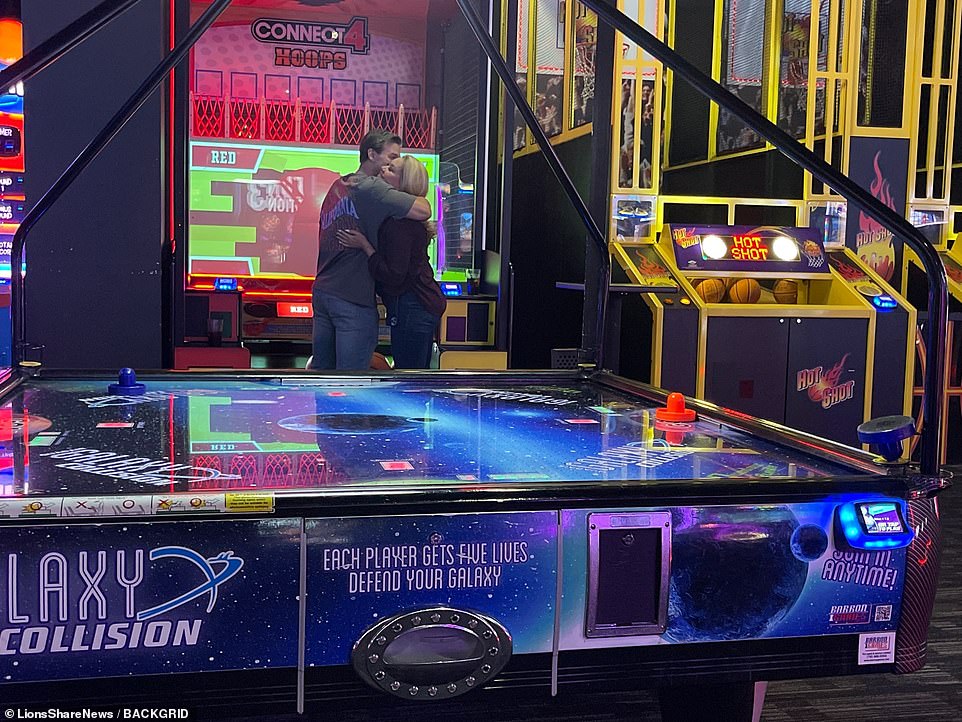 PDA: The couple poured on the PDA during their outing to Dave and Buster’s 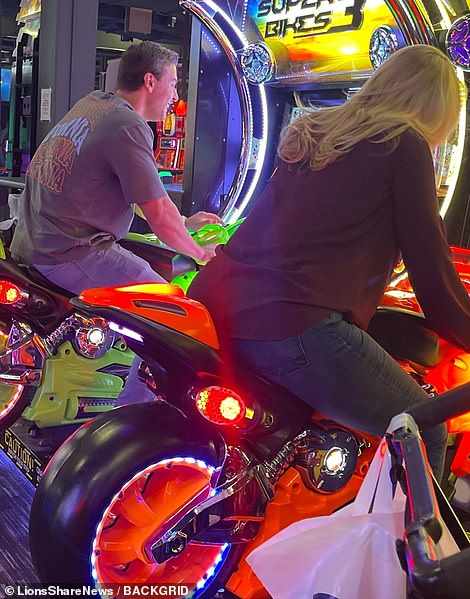 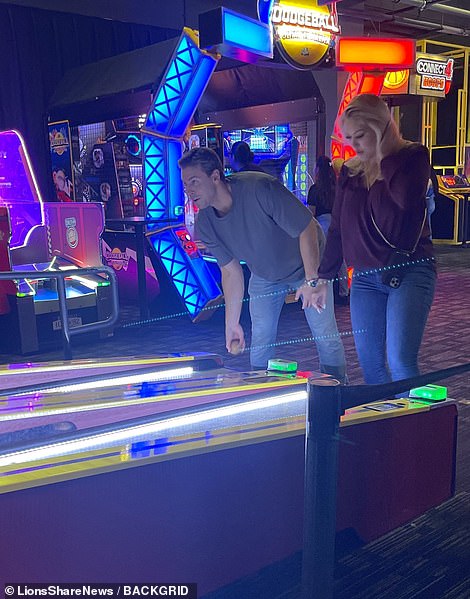 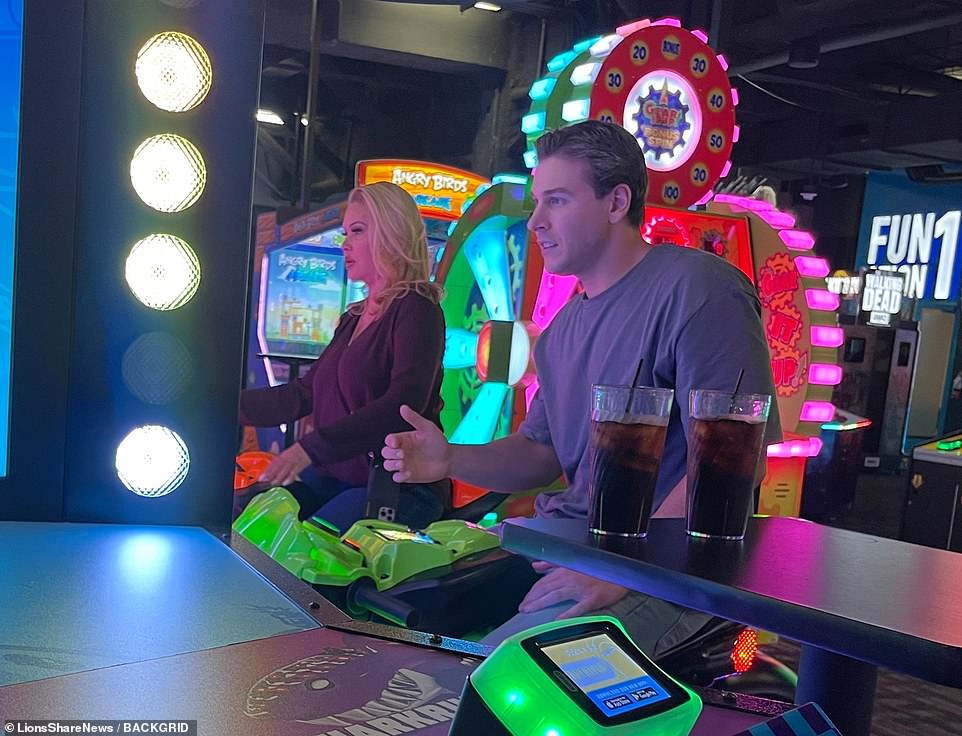 Compatible: The couple seemed to be getting along nicely with no indication that police had been called to check on them earlier in the day

Moakler’s daughter called 911 to report that Rondeau was shouting at her mother, sources with the Los Angeles Police Department on Thursday told TMZ. The former Miss USA, 47, and Rondeau, 30, were wearing ‘skimpy clothes’ when they answered the door at her San Fernando Valley home, sources told the outlet.

Pictures from the scene show Moakler wearing a gray t-shirt and lavender and white sweat pants. 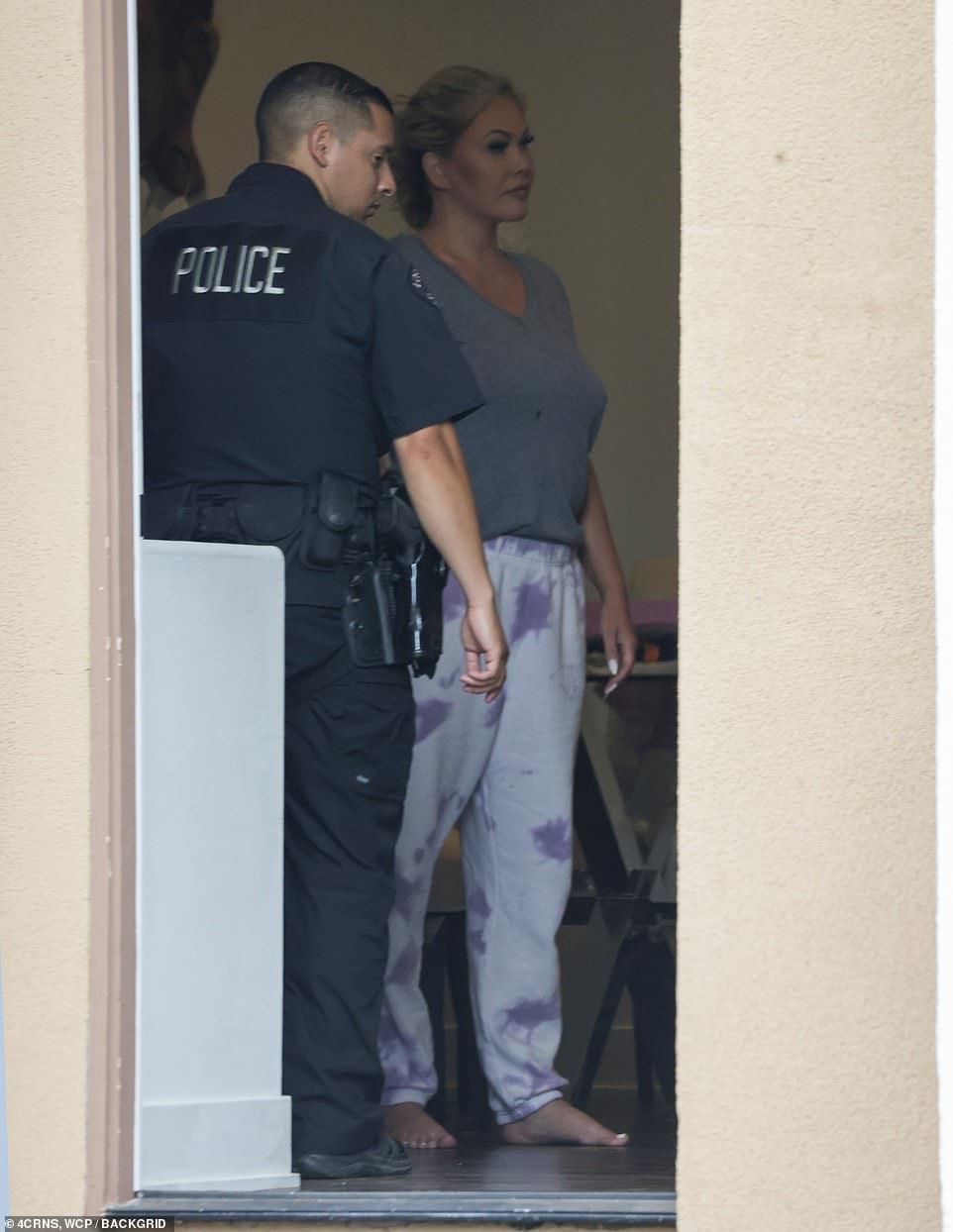 911: Police were called to Moakler’s home earlier Thursday after a 911 call was made reporting a domestic disturbance

Investigation: The investigation was sparked after police sources said one of Moakler’s daughters called to report Rondeau was allegedly yelling at her mother. The daughter was not at home when officers arrived

The daughter who contacted the outlet about the purported incident was not present at the house when police arrived, sources said, adding that law enforcement believes there was miscommunication in the exchange.

US Weekly has reported speaking to a source close to the couple who said ‘They aren’t sure why cops were called — it was uncalled for.’

‘The police left because absolutely nothing was happening. Shanna and Matthew want to be left alone so they can live their lives in peace and move past this.’ 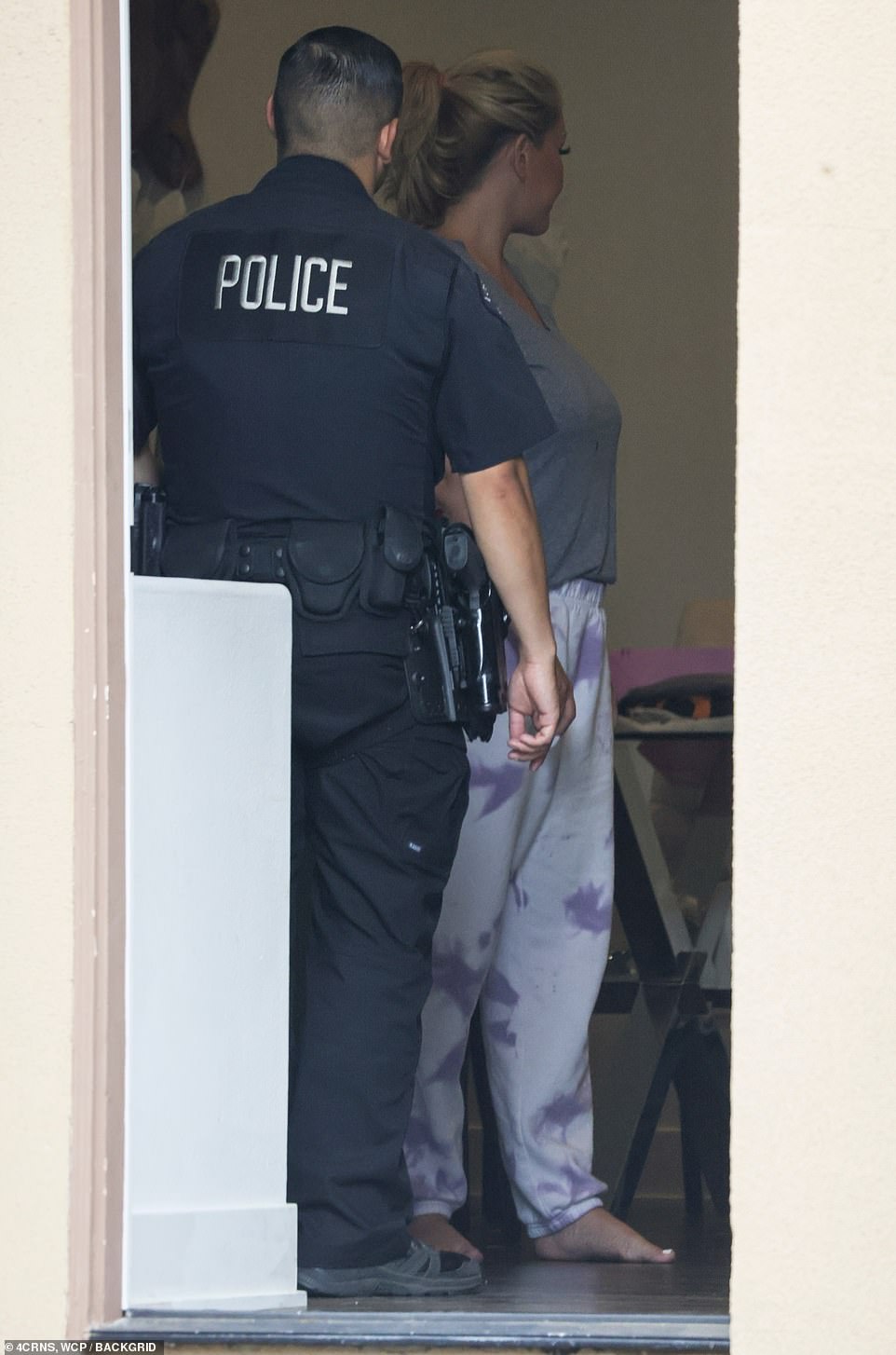 Skimpy: TMZ reported police sources said the couple were wearing ‘skimpy’ clothes when they arrived. Pictures from the scene indicate Moakler was wearing a gray t-shirt and lavender and white sweatpants

Uncalled for: US Weekly reports a source close to the pair saying ‘They aren’t sure why cops were called — it was uncalled for’ 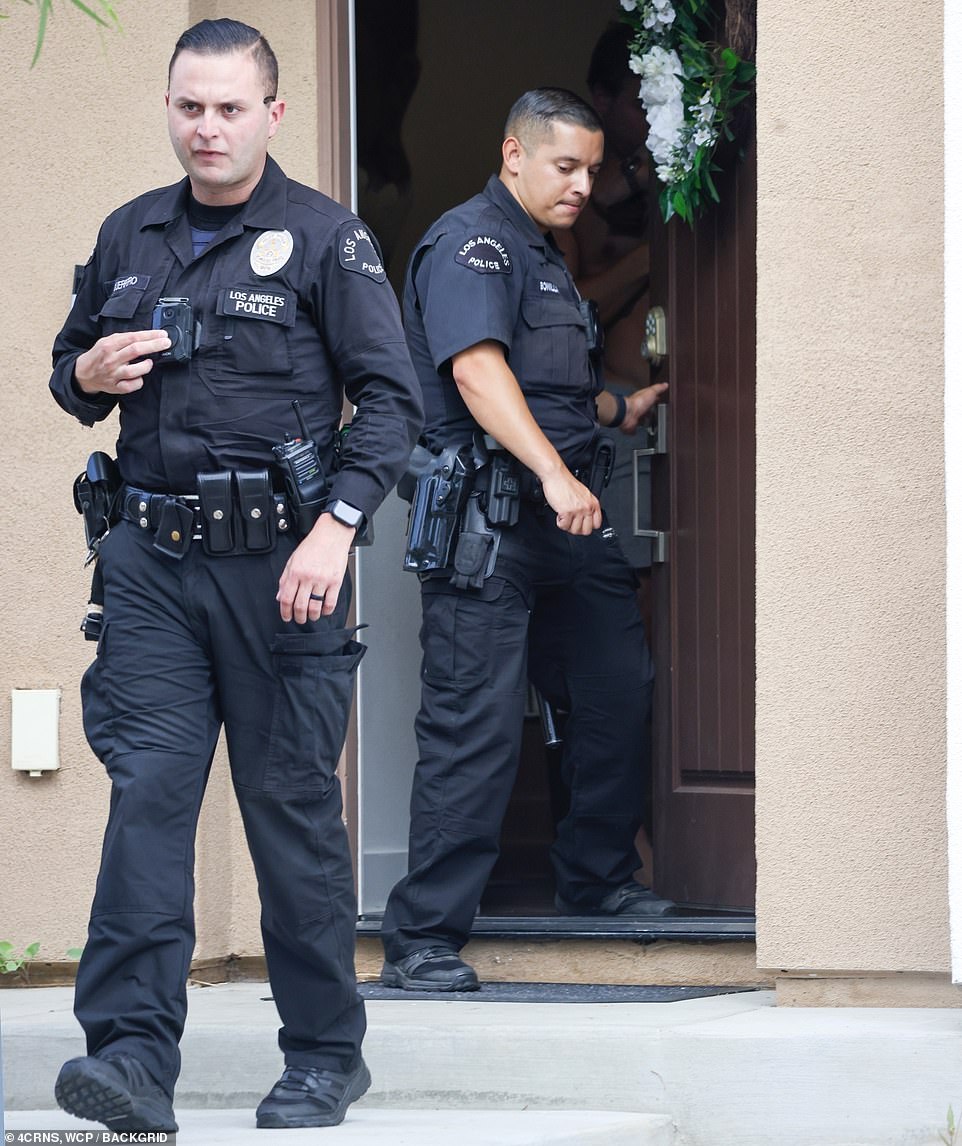 No evidence: Officers who responded to the scene reportedly found no evidence of a disturbance and neither party appeared injured

It was not immediately clear which daughter called authorities in regard to the alleged incident Thursday. 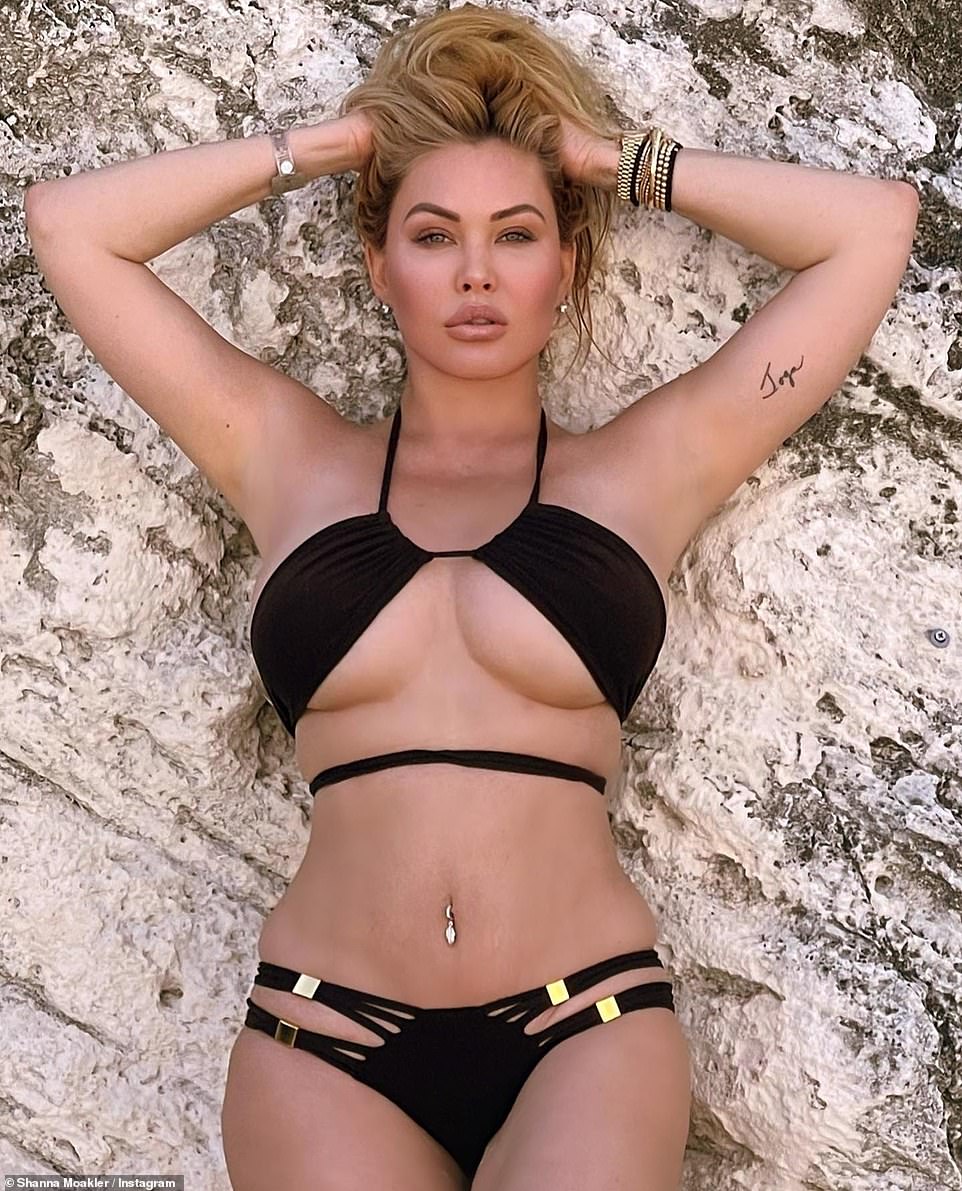 Moakler was seen in a glamorous Instagram shot this past April 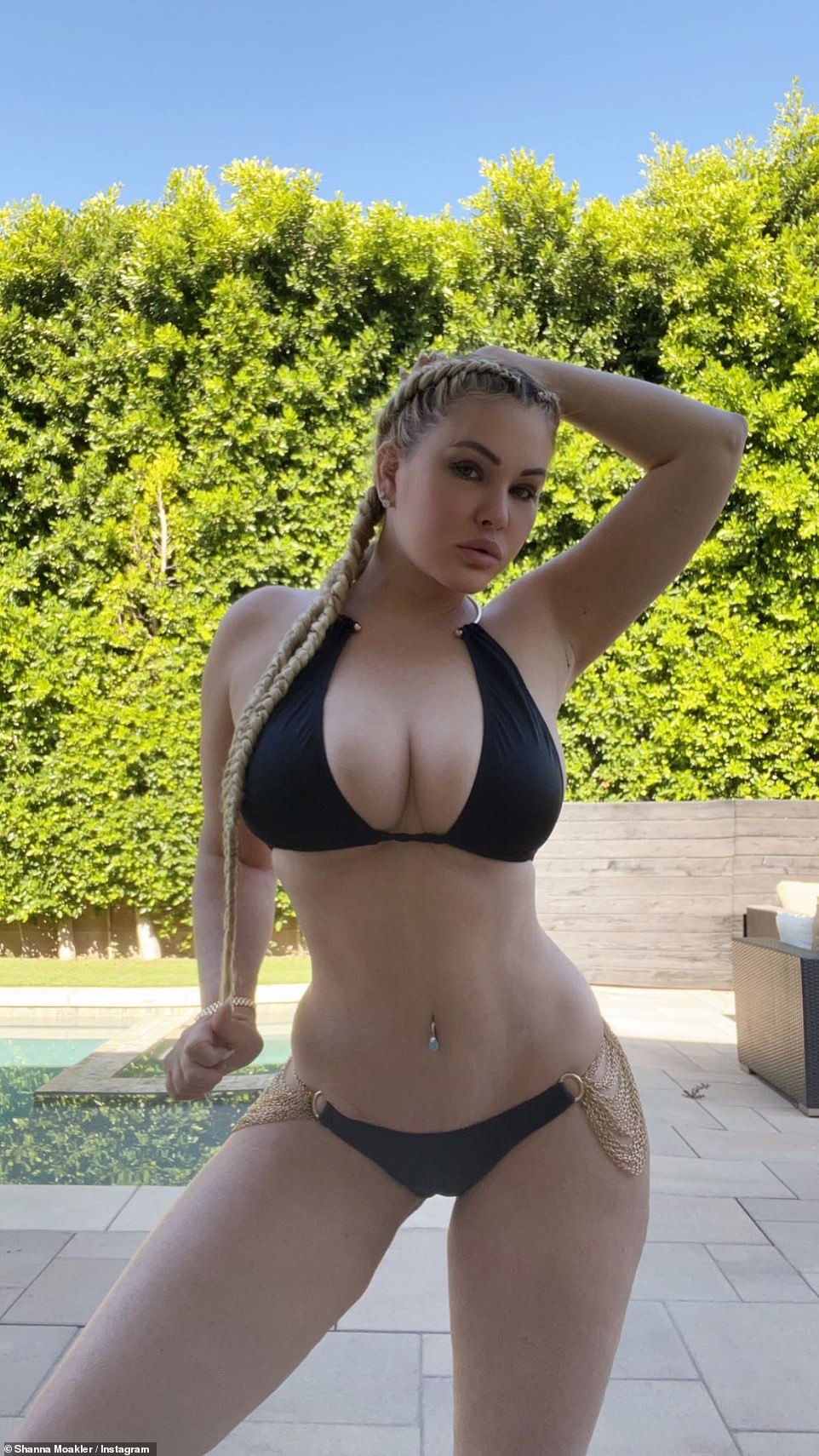 Rondeau was seen on a vacation to Cabo San Lucas, Mexico last month for his 30th birthday

In the exchange, sources told the outlet that Moakler and Rondeau had fought over his accusations of her being unfaithful to him; after she departed the premises, she returned the following morning and they continued to argue, with things getting physical.

Rondeau in late February took to social media with a clip in which he accused her of being unfaithful to him and vowed they would not reunite as a couple.

Weintraub said that Moakler was ‘OK and survived this traumatic experience’ and that she had requested to be ‘given her space to adjust to life after this trauma.’

Rondeau, who has dated Moakler on-and-off since 2020, subsequently took to Instagram after his arrest and claimed that Moakler had made him ‘out to be the villain’ and denied physically abusing Moakler. 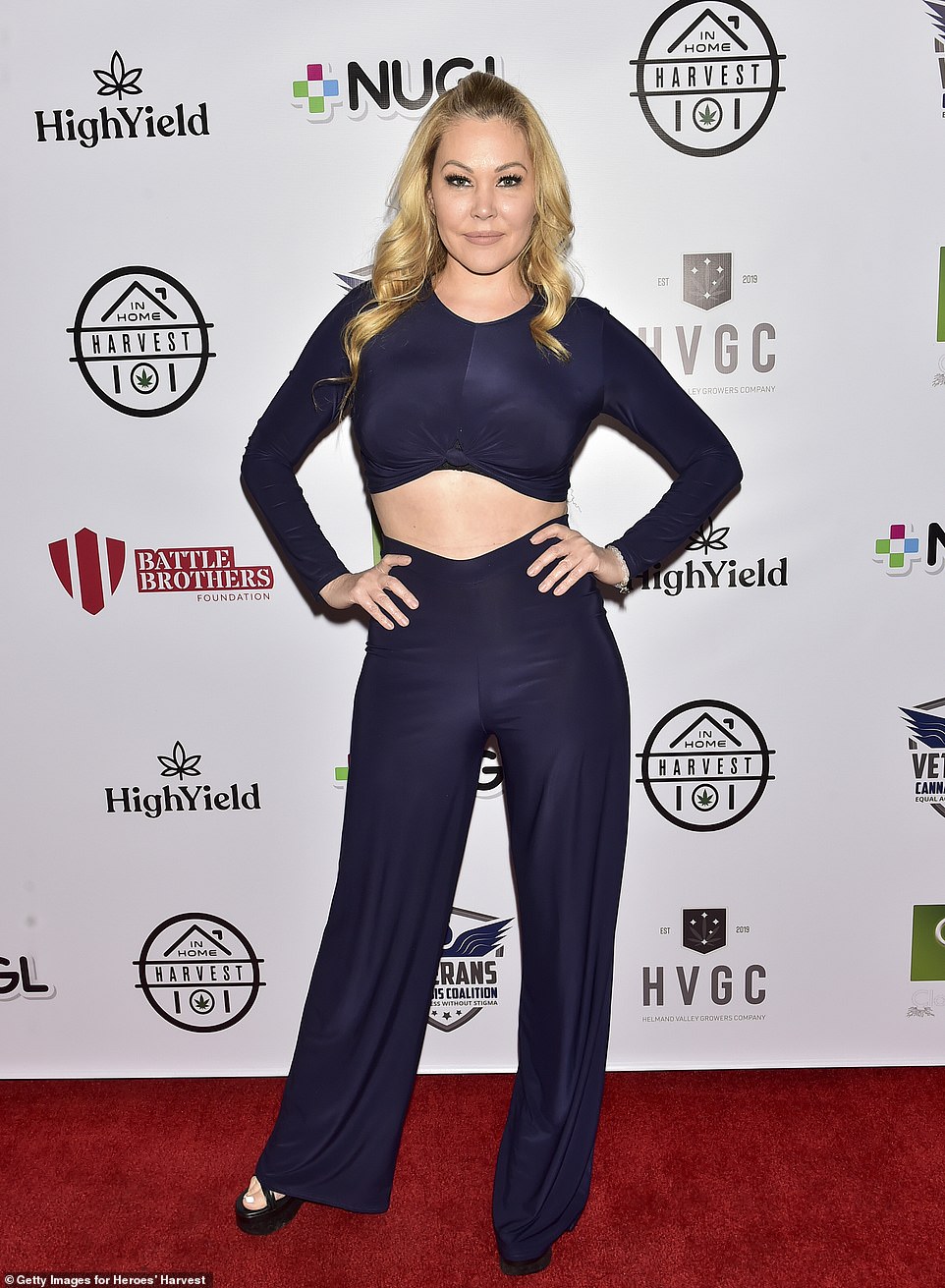 Moakler earlier this week told TMZ she was ‘not pressing charges’ against Rondeau, adding she was ‘hoping the city attorney respects my wishes and drops everything as well’

‘You know I’d never lay a hand on another woman,’ he said. ‘My mother is my angel and my best friend. She raised me right.’

In a police report obtained by US Weekly following Rondeau’s arrest, a police officer said that Rondeau had ‘grabbed [the] victim by the hair’ and swung ‘her by hair on the ground.’

The officer said that Rondeau had ‘grabbed [Moakler’s] face and neck, threw chair at victim and urinated on [her], leaving visible injuries’ in the aftermath.

The officer said that firearms were confiscated in the wake of the incident, and that Rondeau was ordered not to contact Moakler ‘by any means,’ or harass, attack, strike, threaten, [or] assault’ her.

Authorities issued the Pacific Blue actress a protective order from Rondeau following the arrest, ordering him to stay at least 100 yards away from her, but the pair subsequently rekindled their relationship. 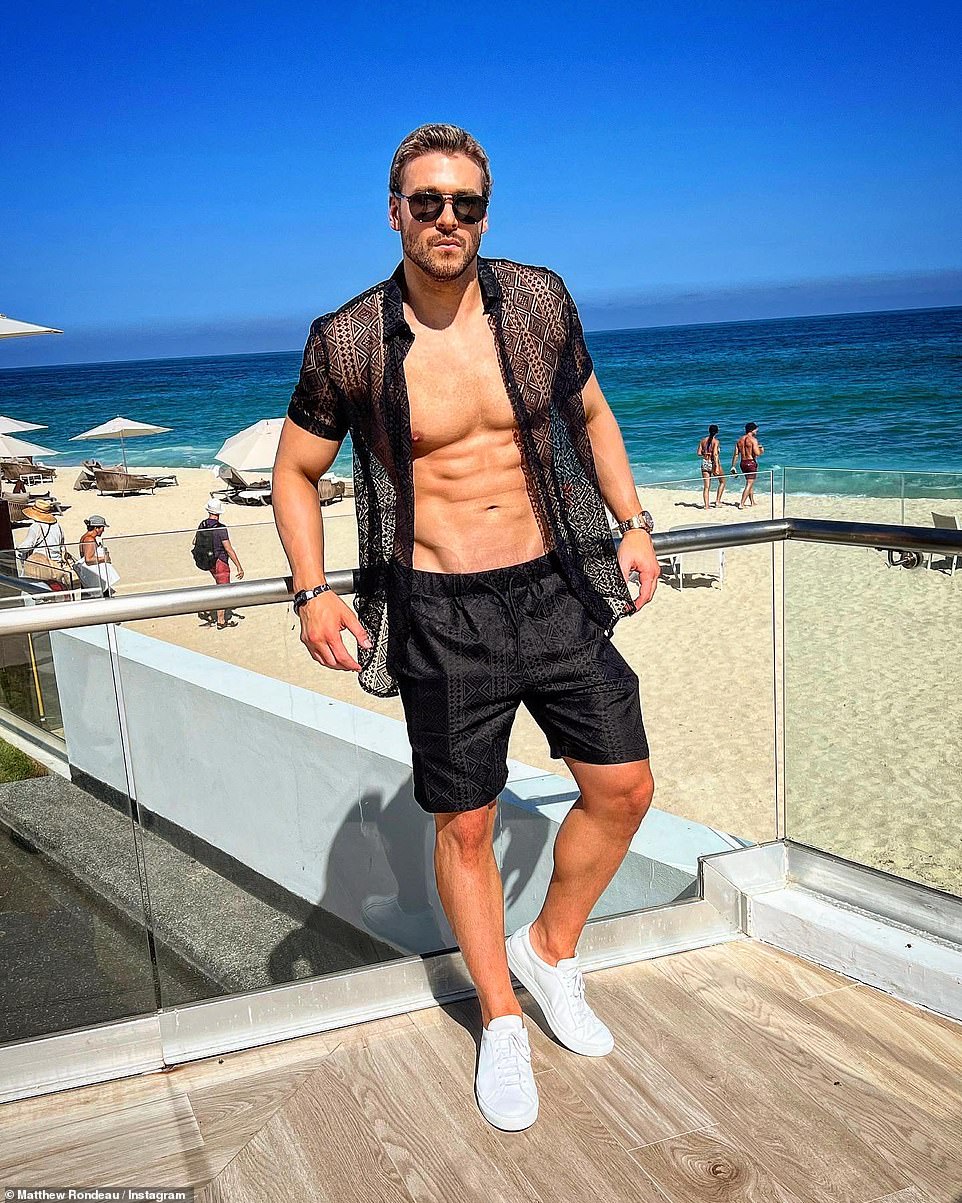 Rondeau described himself as ‘an admirable person, an amazing son, and a very respectable and loving partner’ in a statement to TMZ this week about his legal case 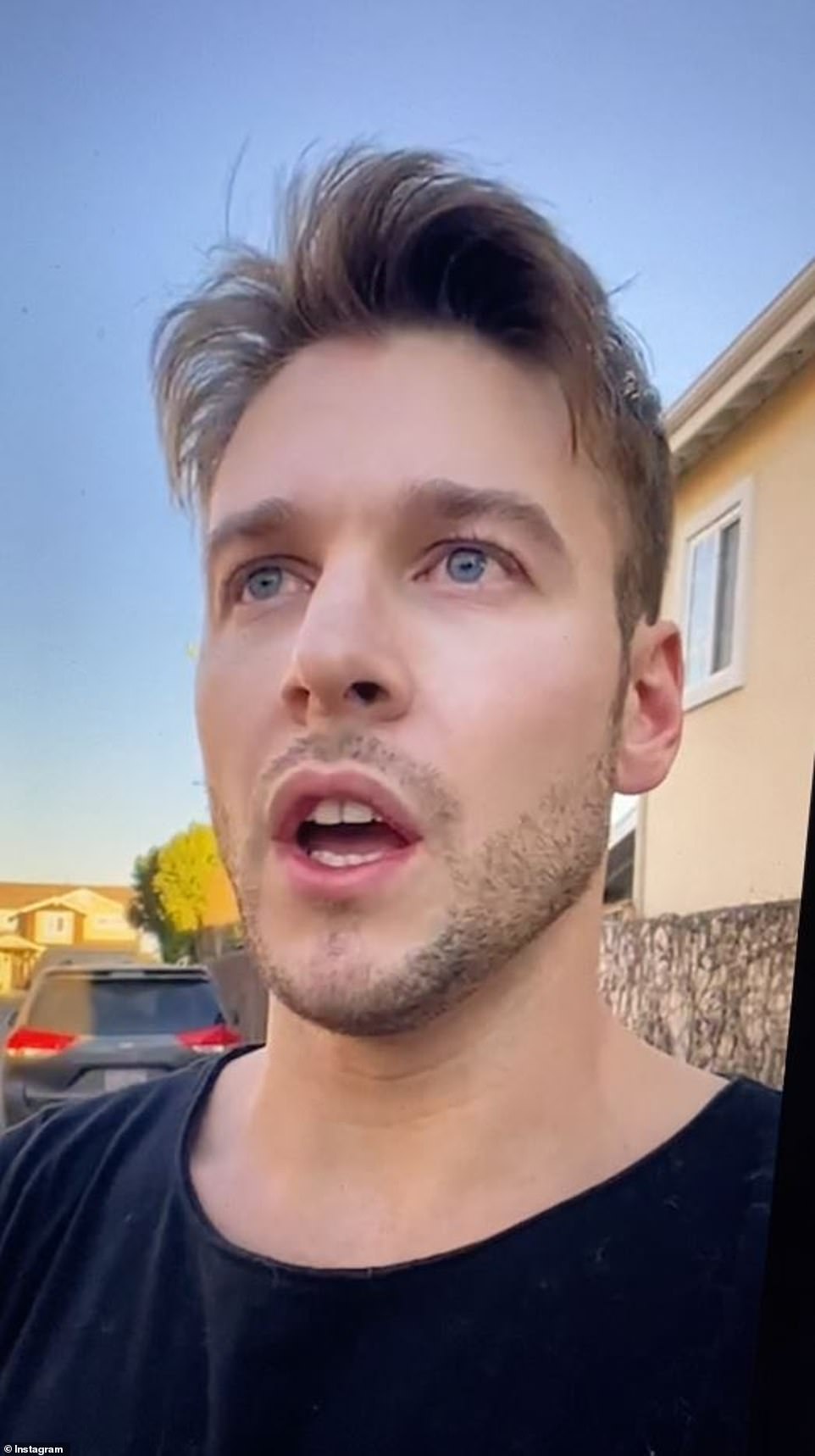 Moakler earlier this week told TMZ she was ‘not pressing charges’ against Rondeau, adding she was ‘hoping the city attorney respects my wishes and drops everything as well.’

She added, ‘I will be supporting Matthew 100 percent. This has disrupted our lives enough. We have both learned from this experience we never wish to have been public, and we would like to move forward in a positive and peaceful manner.’

Rondeau described himself as ‘an admirable person, an amazing son, and a very respectable and loving partner’ in a statement to the website.

‘I haven’t even spoken or made a comment because I am so saddened and disgusted with the narrative the media has portrayed me as,’ he said. ‘I pray that the city of LA allows me to show them they made the right choice on dropping all charges against me.’ 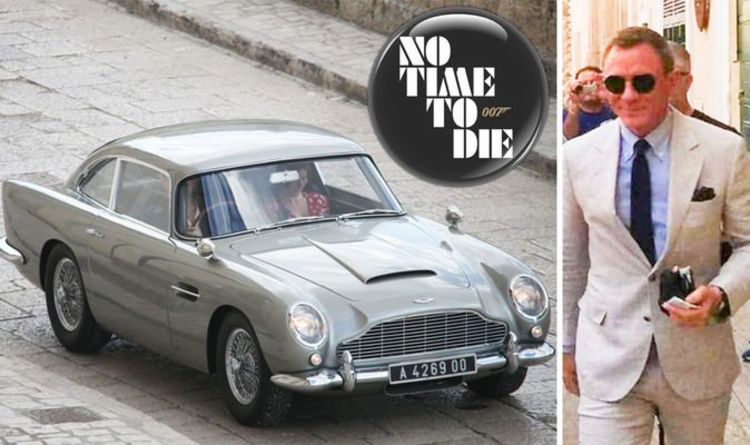 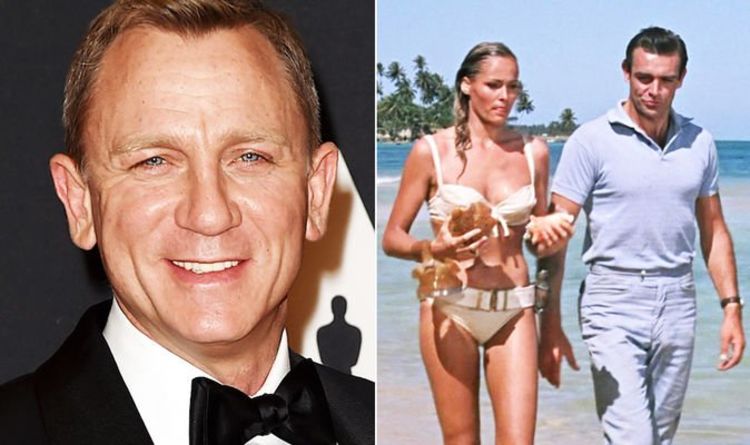 Filming has already begun in part on James Bond 25. Scenes without Craig have been captured on a frozen lake in Norway […] 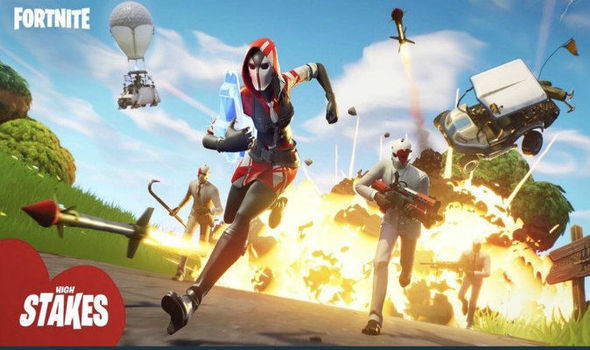 The Fortnite High Stakes event will include the Getaway LTM (Image: EPIC GAMES) For those who have been watching today’s Summer Skirmish, […] 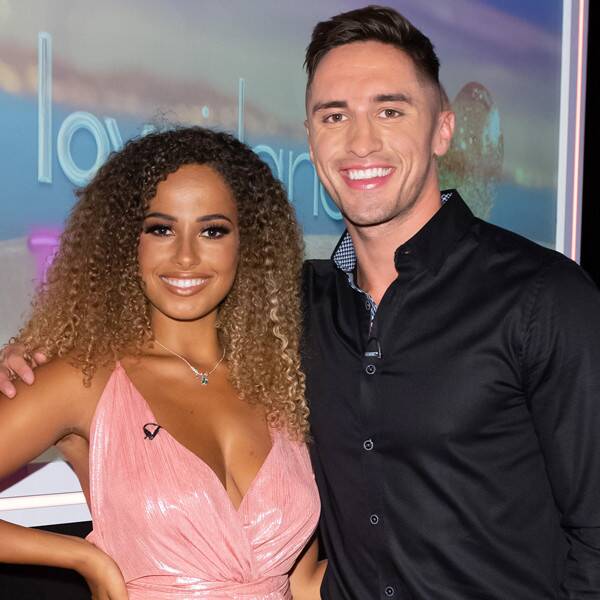