The number of qualified GPs has dropped to its lowest level on record and just one in four family doctors work full time, according to official data that highlights the ‘catastrophic’ crisis in general practice.

There were around 27,500 fully-qualified, permanent family doctors working for NHS England last month, down from about 28,000 in June 2021 and 1,500 fewer than five years ago.

The figure comes despite Boris Johnson’s 2019 manifesto pledge to increase GP numbers by 6,000 by 2024. Ministers have since admitted that target will not be met.

Health bosses have warned the crippling workforce shortages, combined with unprecedented demand for a GP following the pandemic, has created an untenable situation that threatens patient safety.

Meanwhile, just 23 per cent of permanent NHS GPs work 37.5 hours or more a week, a drop from one third in five years. It follows research showing most family doctors now only work three days or less a week.

Patients have struggled to secure appointments or see a doctor face-to-face, which has seen some desperate people resort to turning up at A&E.

Data for June shows fewer than half of all appointments were carried out by qualified doctors. The rest were seen by other staff, including nurses, physiotherapists and even acupuncturists.

Nearly one in five appointments nationally lasted five or fewer minutes last month, in what campaign groups said was a sign GP surgeries have turned into ‘revolving door’ practices in an effort to get patients in and out as fast possible to get through huge workloads.

Appointments are meant to last no less than 10 minutes according to NHS best practice, while unions have pushed to increase the time to 15 minutes to ensure ‘quality of care’.

Meanwhile, around 65 per cent of appointments were made face-to-face during the month, down from nearly 80 per cent before the pandemic. 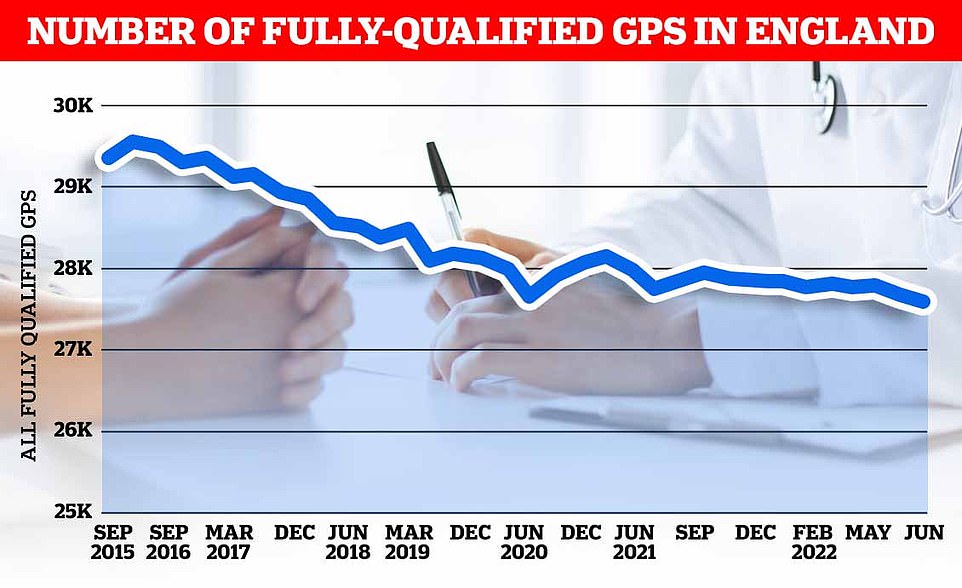 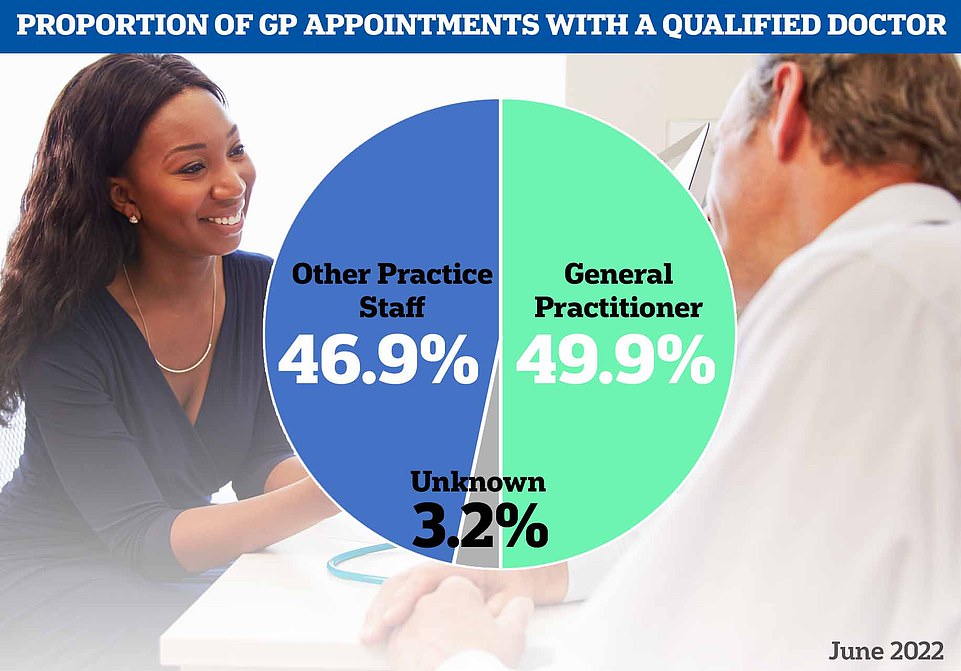 Meanwhile, separate figures today showed less than half of all appointments made last month saw patients seen by qualified doctors. Nearly 47 per cent of patients were seen by nurses or other staff, which can include acupuncturists and physiotherapists 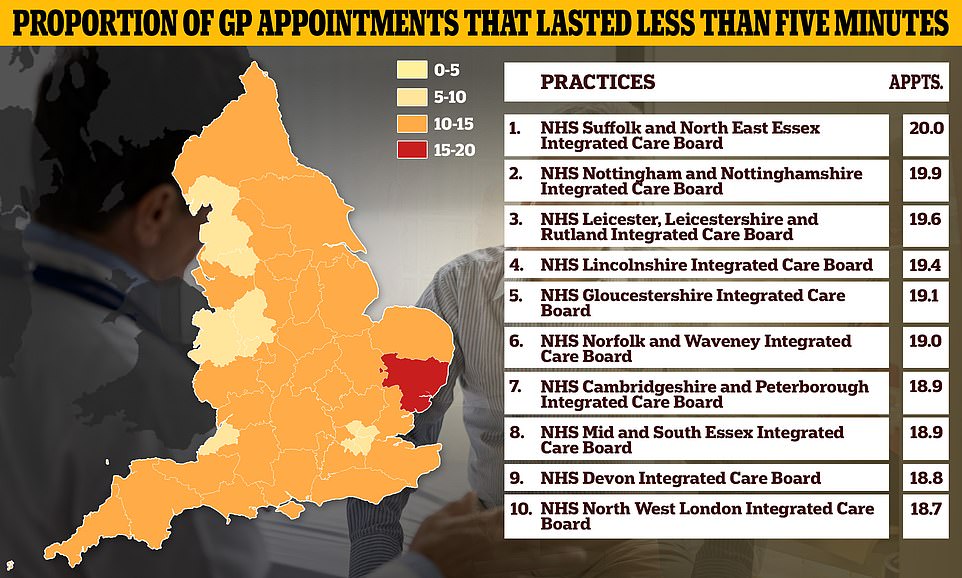 One in six appointments in the country lasted up to just five minutes last month, with even higher proportions seen in some areas of the country. NHS Suffolk and North East Essex Integrated Care Board saw 20 per cent of patients in five minutes or less

Increasing numbers of doctors are reducing their working hours and retiring early, while some are leaving to the private sector or abroad because of the huge increases in pressure put on them.

The NHS Digital data shows the number of full-time equivalent GPs that are fully qualified have dropped to its lowest level since records began in September 2015.

All figures are based on the number of full-time equivalent posts in the GP workforce, and do not include trainees or locums.

Patients will be able to access test results and other information via the NHS app from November in a move that will free up GP surgery phone lines.

NHS England will switch on automatic access to GP records on November 1 following a year-long delay due to ‘safeguarding’ concerns.

For patients accessing more sensitive information, such as cancer test results, GPs will be able to customise how and when their records are shared.

Professor Sir Stephen Powis, of NHS England, said: ‘Improving patient access to health information on the NHS App will put patients in the driving seat when it comes to managing their own health.’

He added it would help free up GP phone lines for urgent calls.

The November date was confirmed in a letter to GPs last week.

It said practices can ‘consider increasing the number of patients who have online access and/or enhance their level of access gradually over the coming months’.

Emily Jones, director of risk and healthcare at consultancy firm Broadstone, said: ‘The declining number of qualified GPs in the UK is pushing the NHS to breaking point as demand continues to rise amid a growing backlog.

‘The crisis risks a vicious spiral as more GPs quit the practice due to the intensifying workload heaping further pressure on those that remain in service.

‘Patients are now waiting longer than ever for appointments with their GP for new diagnoses as well as ongoing treatments for existing conditions like cancer and diabetes.

‘This is having a catastrophic impact as life threatening illnesses are being left undiagnosed until it is sadly too late for effective treatment.’

GPs said doctors have been forced to drop their working time to avoid burnout because of the ‘unsustainable’ pressures being put on them by ever-increasing demand.

Professor Martin Marshall, chair of the Royal College of GP, told MailOnline: ‘Despite repeated promises to boost GP numbers, today’s figures show that we have more than 1,500 fewer qualified, full-time equivalent GPs than we did five years ago.

‘The result is a chronically over-stretched and under-resourced general practice service, with GPs and their teams working to their absolute limits to deliver increasingly complex care to the ever-rising number of patients that need it.

‘This is reflected in today’s GP consultation figures, which show general practice is continuing to deliver more consultations every month than pre-pandemic, with more than 26million appointments delivered in June, and over 44 per cent of those on the same day they were booked.’

He added: ‘Working at this intensity is unsustainable and it’s unsafe for both patients and staff. An exhausted GP is not able to practice safely or deliver the high-quality care and services they are trained and want to deliver for patients.

‘This is leading to GPs and other members of our teams burning out and having to evaluate their futures working in general practice, in some cases leaving the profession earlier than planned and in others reducing contracted working hours to make the job more sustainable.

‘Yet working “part time” in general practice often means working what would normally be considered full-time, or longer — and will likely include many hours of paperwork on top of patient appointments.’ 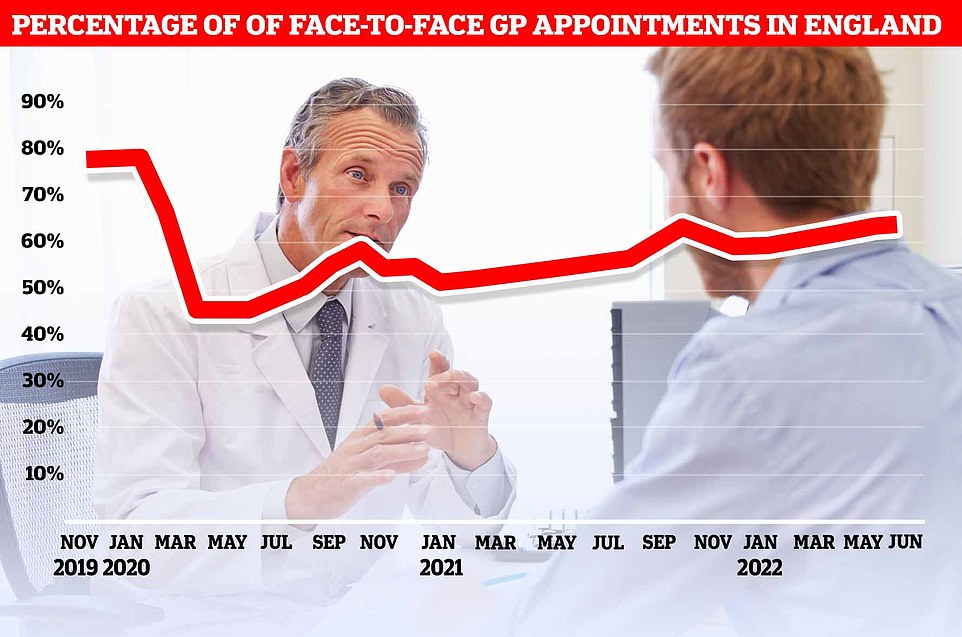 The proportion of GP appointments that were face-to-face rose slightly to 64.8 per cent last month, up from 64.1 per cent in May 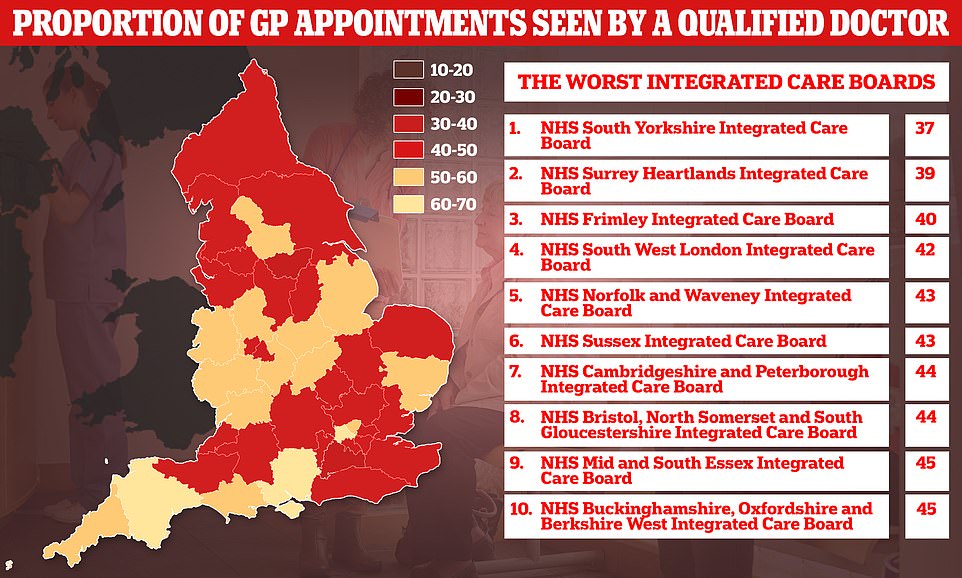 Graph shows: The proportion of patients seen by a fully qualified doctor at GP appointments in different regions of England in June

Half of sick Britons have not seen a GP in a year, stark official figures suggest.

In most cases, the reason is they find it too difficult to book an appointment, according to a major survey.

Critics today described the lack of access as a ‘ticking time bomb’ that will lead to vital diagnoses being missed.

A poll of 700,000 people with long-term health conditions in England found patient satisfaction and trust in general practice has fallen across the board.

More than half of patients (55 per cent) who needed an appointment in the 12 months to April failed to secure one, up from 42 per cent the previous year.

The main reason for a quarter of patients was that it was too difficult to book one, while a fifth said they did not want to burden the NHS.

Patients struggled to see a GP for check-ups, treatment and drug reviews during the pandemic as surgeries switched the majority of consults to phone and video.

Practices are now seeing record demand as those who could not get care or put it off start to pour back into the NHS.

Separate data from NHS Digital shows the proportion of appointments where patients are seen by qualified doctors fell to just 49.9 per cent last month, down from 50.2 per cent in May.

The figures are calculated based on the number of sessions with a GP in attendance as a proportion of all appointments, which include some appointments where the type of healthcare professional was not recorded.

This means there may have been slightly more appointments that were attended by GPs than are reflected in the data.

One in six appointments in the country lasted up to just five minutes last month, with even higher proportions seen in some areas of the country.

NHS Suffolk and North East Essex Integrated Care Board saw 20 per cent of patients in five minutes or less.

The area with the next highest proportion of sub five-minute consultations was NHS Nottingham and Nottinghamshire Integrated Care Board (19.9 per cent)

Dennis Reed, director of elderly charity Silver Voices, told MailOnline: ‘I find it difficult to comprehend how a GP visit can take less than five minutes. That hardly provides enough time to take your coat off and sit down.

‘Routine and speedy transactions, such as repeat prescriptions or blood pressure checks are now carried out by other practice staff, and it is only complex cases, which are referred for GP attention.

‘These “revolving door” statistics show the pressures that GPs are under and the potential dangers to patient safety from rushed diagnoses.’

Appointments are supposed to be fixed at 10 minutes according to NHS best practice. More than half (51.8 per cent) of appointments lasted less than 15 minutes, according to the figures.

Meanwhile, the proportion of GP appointments that were face-to-face rose slightly to 64.8 per cent last month, up from 64.1 per cent in May.

The amount of consultations that are made in-person are still below pre-pandemic levels, with concerns raised doctors are less able to spot potentially dangerous diseases over the phone or on Zoom calls.

The data comes after the annual GP Patient Survey earlier this month revealed half of sick patients have not seen their GP in the last year, with most saying it was because they could not get an appointment.

Of patients who had avoided seeing a GP in the past year, more than a quarter (27 per cent) said they found it too difficult to book an appointment — more than double the number in 2021 (11 per cent).

Some 20 per cent were worried about the burden on the NHS, while 12 per cent said it was due to being worried about catching Covid, down from 17 per cent in 2021.

Of those who did manage to see a doctor in the last 12 months, half (49 per cent) said they were not seen as quickly as they wanted, up from 41 per cent.

Just 56 per cent said they had a good experience making an appointment compared to 71 per cent a year ago. 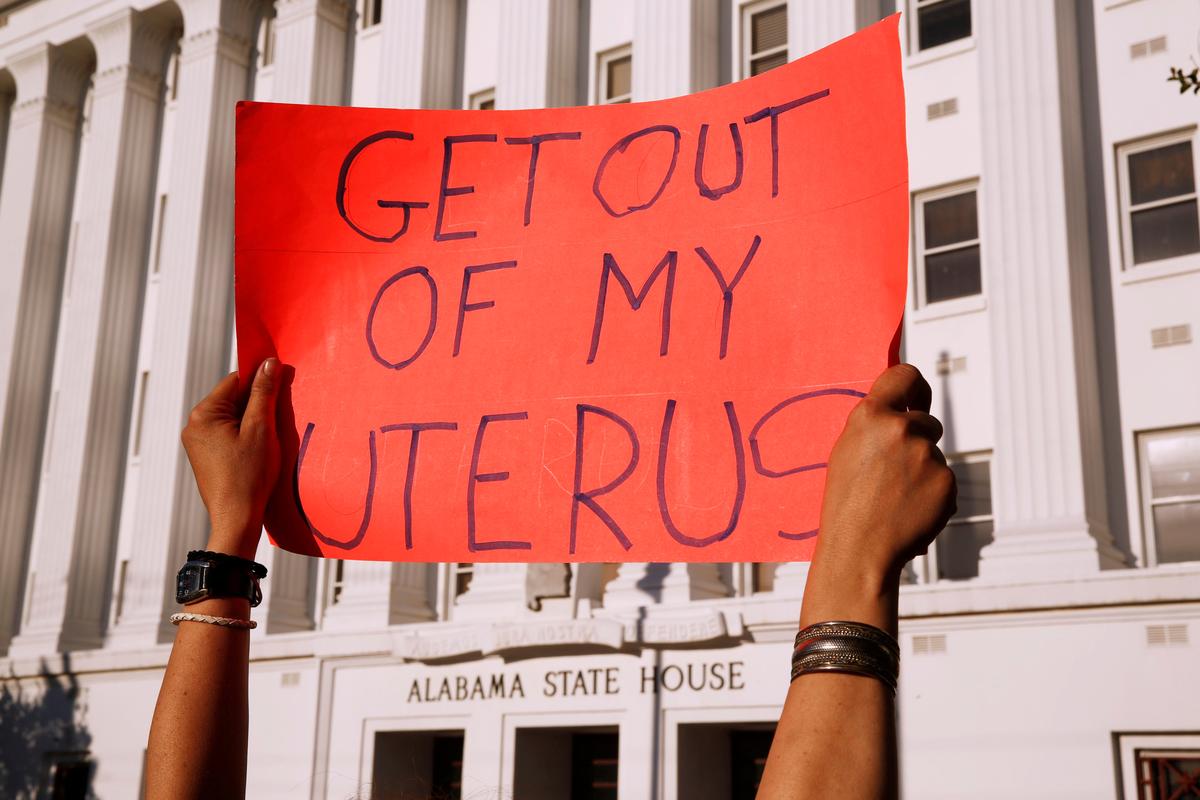 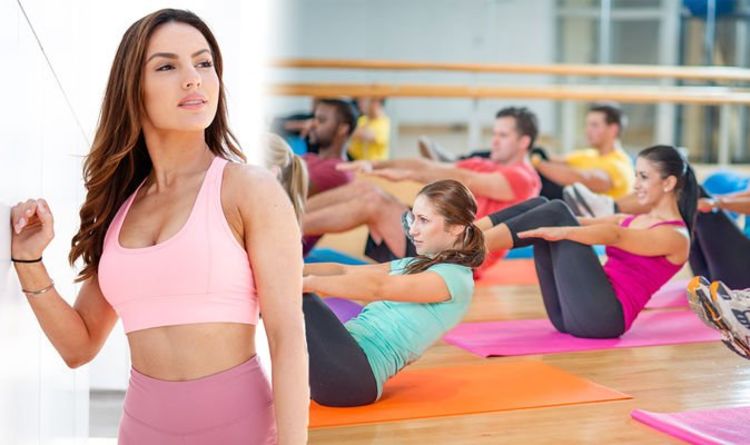 “Place both your hands out in front of your abdominals with your elbows tucked in, clasping your hands together. Lift your feet […] 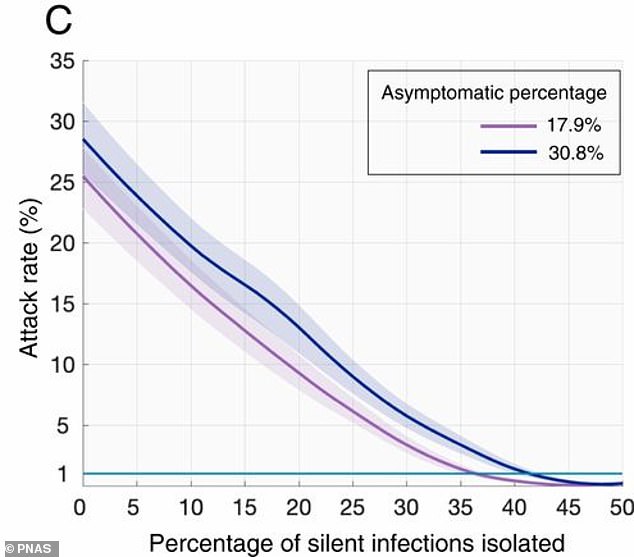 ‘Silent spreaders’ may account for HALF of all coronavirus cases in the US as nearly 50,000 people a day test positive, study […]