Nick Kyrgios’ ex-girlfriend has broken her silence after he was charged with assaulting her – while the tennis star’s brother has slammed the ‘haters and liars’ who ‘always try and bring him down’.

On Tuesday, it was announced that Kyrgios will appear before the ACT Magistrates Court on August 2 after he was of assaulting his model ex-girlfriend Chiara Passari last year.

However, ACT Police confirmed to Daily Mail Australia that the alleged incident was only reported in December. It is said to have occurred months earlier.

Now, Ms Passari, 23, has spoken for the first time since the allegations emerged, taking to Instagram to say she had reported the alleged assault to police in December.

The model, who was allegedly pushed by Kyrgios, also insisted she had nothing to do with the charges only emerging this week as Kyrgios prepared for Wimbledon quarter-final.

In response to an Instagram comment that defended her, Ms Passari wrote: ‘Thank you. Finally someone smart enough to understand how the justice system works.’

Her comments came as she was trolled online by his supporters, who accused her of derailing his Wimbledon dream.

Meanwhile, Kyrgios’ elder brother, Christos, has taken to Instagram to defend him.

‘Haters and liars will always try bring us down – we keep it 100 and push forward,’ he said. 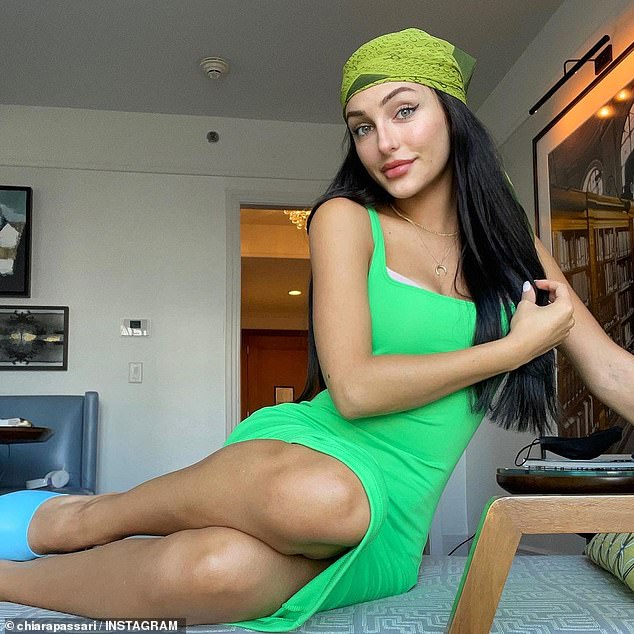 Chiara Passari, 23, has spoken for the first time since the allegations emerged to tell the Daily Telegraph that she reported the alleged assault to police in December 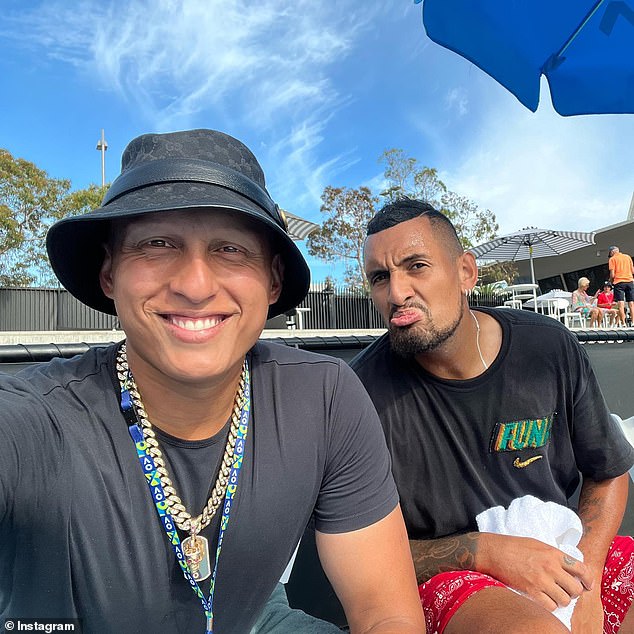 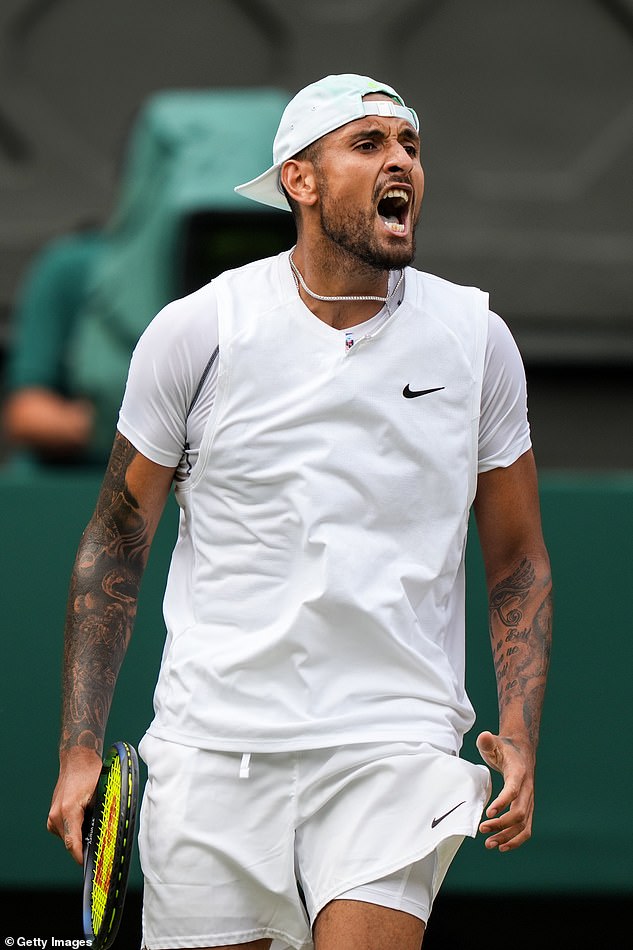 The tennis ace, who will play Chile’s Cristian Garin on Wednesday for a spot in the Wimbledon semi-final, appeared calm as he appeared at a practice shortly after the allegations emerged

‘This is why I play. To all my youngsters out there, believe in yourself,’ he captioned a photo of an adoring young fan at Wimbledon, shortly after the allegations came to light. His brother made his comment in reply to the post

Christos, who is a regular in the players’ box when his brother plays, made the comment on an Instagram post from Kyrgios, where he urged his 2.3 million followers to ‘believe in themselves’.

‘This is why I play. To all my youngsters out there, believe in yourself,’ he wrote, alongside a photo captured of an adoring young fan at Wimbledon.

His current girlfriend, 21-year-old Costeen Hatzi, left a series of emojis in the comment section which Kyrgios responded to with a single love-heart.

The tennis ace, who will play Chile’s Cristian Garin on Wednesday at 11pm (AEST) for a spot in the Wimbledon semi-finals, appeared calm as he appeared at a practice shortly after the allegations emerged.

Kyrgios told waiting reporters he ‘felt like he was in The Last Dance’ – referring to the 2020 documentary about basketball legend Michael Jordan.

The tennis star’s quarter-final clash against at Wimbledon after a string of controversial matches.

‘ACT Policing can confirm a 27-year-old Watson man is scheduled to face the ACT Magistrates Court on the 2nd of August in relation to one charge of common assault following an incident in December 2021,’ police said on Tuesday afternoon.

The charge carries a maximum sentence of two years in prison.

Kyrgios’s barrister Jason Moffett, from Key Chambers, told The Canberra Times his client was aware of the allegations, which were ‘in the context of a domestic relationship’. 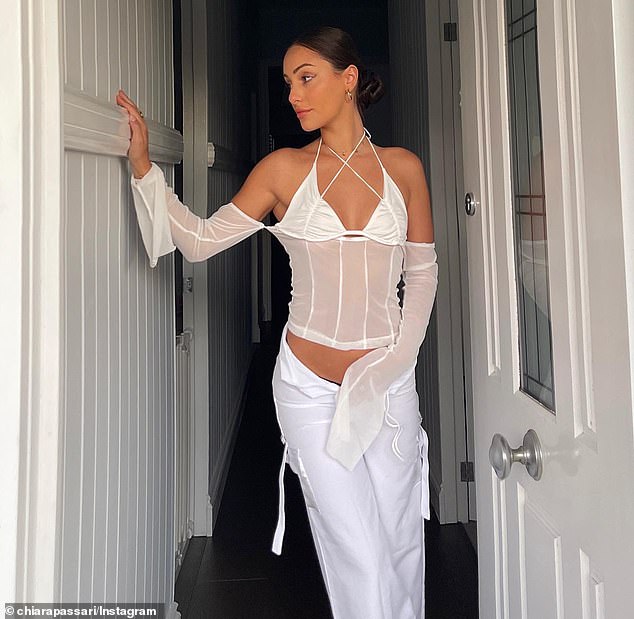 In response to an Instagram comment that defended her, Ms Passari wrote: ‘Thank you. Finally someone smart enough to understand how the justice system works’

Kyrgios’ battle against Stefanos Tsitsipas was undoubtedly the most talked-about match of the tournament so far (pictured, Kyrgios arrives at the Wimbledon practice courts with his manager Daniel Horsfall on Tuesday)

After his practice today I asked Nick Kyrgios about allegations in Australia, where he’s been summonsed to court next month to face a charge of common assault, following an alleged incident in Dec ‘21. His barrister told the Canberra Times he takes the allegation “very seriously” pic.twitter.com/6E8fj25rHk 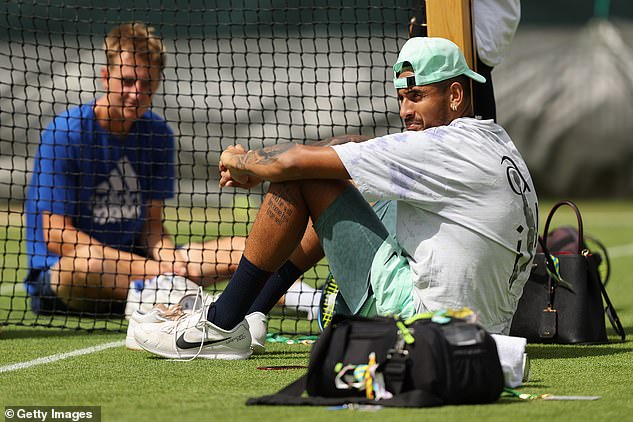 ‘Given the matter is before the court… he doesn’t have a comment at this stage, but in the fullness of time we’ll issue a media release.’

‘At the present time, the allegations are not considered as fact by the Court, and Mr Kyrgios is not considered charged with an offence until the First Appearance,’ the statement said.

‘It may be misleading to the public to describe the Summons in any other manner than a formal direction to appear to face allegations, the precise nature of which is neither certain at this moment nor confirmed by either the Prosecution or Mr Kyrgios.’ 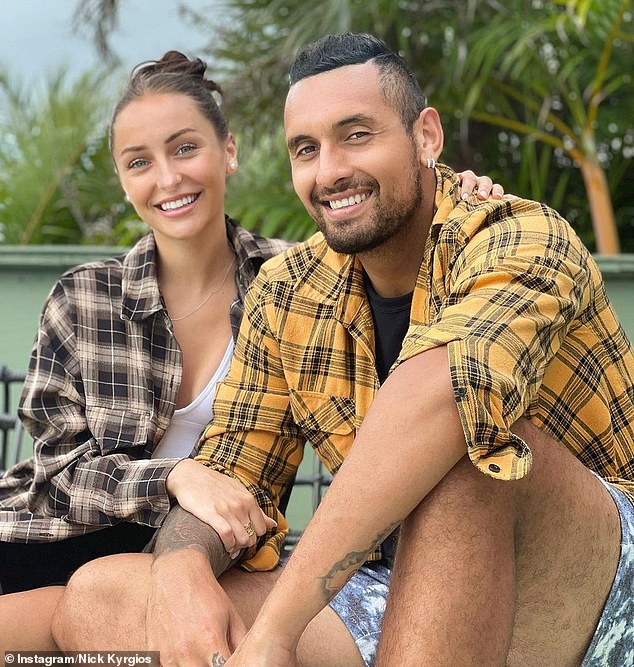 The Australian tennis star, 27, who currently preparing for a quarterfinal clash at Wimbledon, is accused of assaulting model Chiara Passari (pictured together) and will face court next month 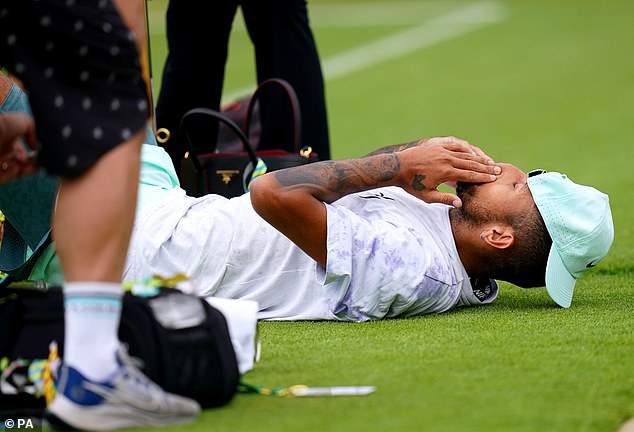 Nick Kyrgios takes a break during practice ahead of his quarter-final match at Wimbledon, just an hour after the allegations came to light

Kyrgios, known largely to his supporters as a loveable rogue, is being fuelled by his critics in a bid to achieve his best grand slam result at Wimbledon.

He struggled with a shoulder problem but recovered from a set down and then clinched the decider against 20-year-old American Brandon Nakashima on Monday, winning 4-6 6-4 7-6 (2) 3-6 6-2 to set up a quarter-final with Chile’s Garin.

Kyrgios’ battle against Stefanos Tsitsipas was the most talked-about match of the tournament so far, and he received plenty of criticism for his on-court behaviour.

‘Honestly, I don’t care,’ said Kyrgios. ‘I just smile. It’s so funny. I joke around with my team about it so much. It’s hilarious.

‘I almost just wake up and read things, and I just laugh. And I never forget things people say, whether it was three, four years ago, things that just stick with me.

‘I have a massive chip on my shoulder. I sit here now in the quarter-finals of Wimbledon again, and I just know there’s so many people that are so upset.’

Kyrgios was fined $10,000 after his first-round match for spitting towards a fan, was warned for swearing on Saturday and then called for Tsitsipas to be defaulted after the Greek hit a ball close to a spectator’s head after losing the second set.

Both players received fines on Sunday.

Kyrgios meets Passari after returning home to Canberra during the Covid pandemic.

In an interview with Today hosts Karl Stefanovic and Alison Langdon, Kyrgios said he was ‘incredibly happy’ and ‘lucky enough to have met her’.

The pair shared loved-up photos as they welcomed in 2021 on New Year’s Eve with friends in Canberra.

On February 2, Passari uploaded a cryptic Instagram post that read, ‘Cheaters always want you to be loyal while they’re being unfaithful,’ – though it is unclear as to whether she was referring to Kyrgios.

On February 14, Valentine’s Day, Kyrgios posted a photo of his girlfriend laying on a bed with a bunch of red roses and a bottle of wine.

‘Happy Valentine’s b,’ he wrote, with a series of heart emojis. ‘Chiara Passari, I love you.’

A week later, Passari posted a screenshot of a troubling text message exchange, during which Kyrgios said ‘you disgust me’ and told her to ‘be in Canberra the rest of your life’.

Pictured side-by-side at Sydney Airport while waiting for a flight to Canberra – $5000 designer suitcases in tow.

They climbed the Sydney Harbour Bridge together.

Pictured kissing passionately in a pool during a holiday in the Bahamas – her legs wrapped around the sportsman’s waist.

Police were called to an heated argument between the couple at a quarantine hotel room in Adelaide.

Ms Passari accused the former World No. 13 of cheating on her, and shared a photo to Instagram purporting to show him in bed with a ‘naked girl’.

She then shared a photo of a shirtless and sleeping Kyrgios, adding the caption: ‘That girl naked in bed with him isn’t me by the way… Hope that clears it up.’

The social media drama resulted in a ‘verbal argument’ between the pair in their hotel suite, with police eventually forced to separate them into different rooms.

In a series of texts Ms Passari posted on Instagram, the pair agreed to stop living together.

Kyrgios announced he was in a relationship with Sydney blogger Costeen Hatzi. Passari said she didn’t expect their relationship to last.

Kyrgios gushed about how he was ‘obsessed’ with Hatzi.

Two days later, on July 5, he was charged with common assault. Kyrgios will appear in ACT Magistrate’s Court on August 2. 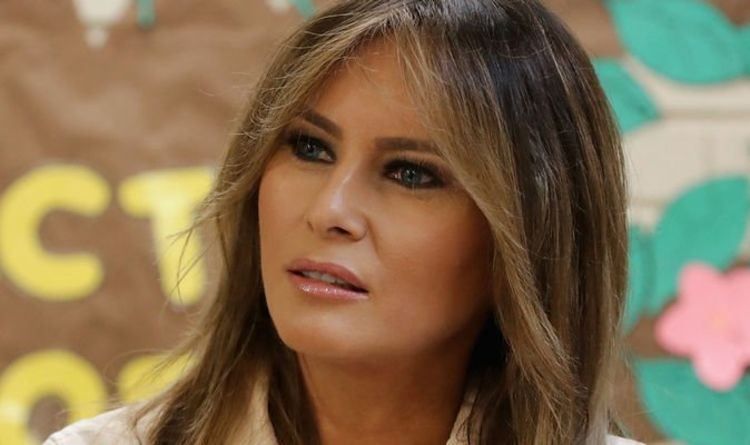 The First Lady wrote on social media how she was looking forward to the organisations “incredible” work, with it she posted a […] 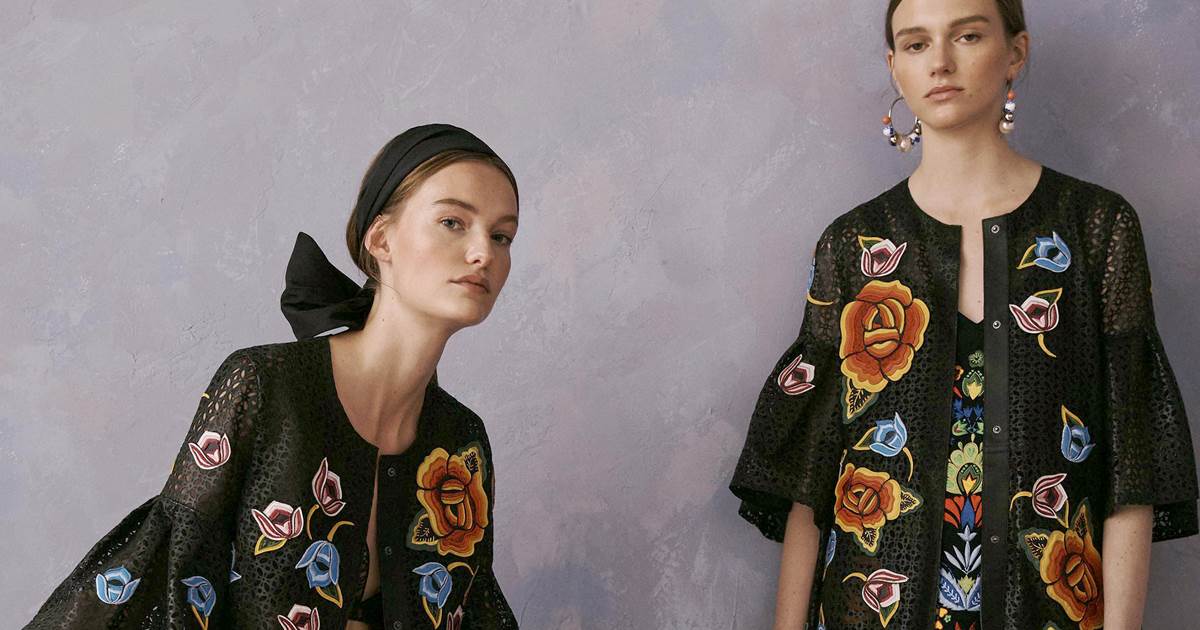 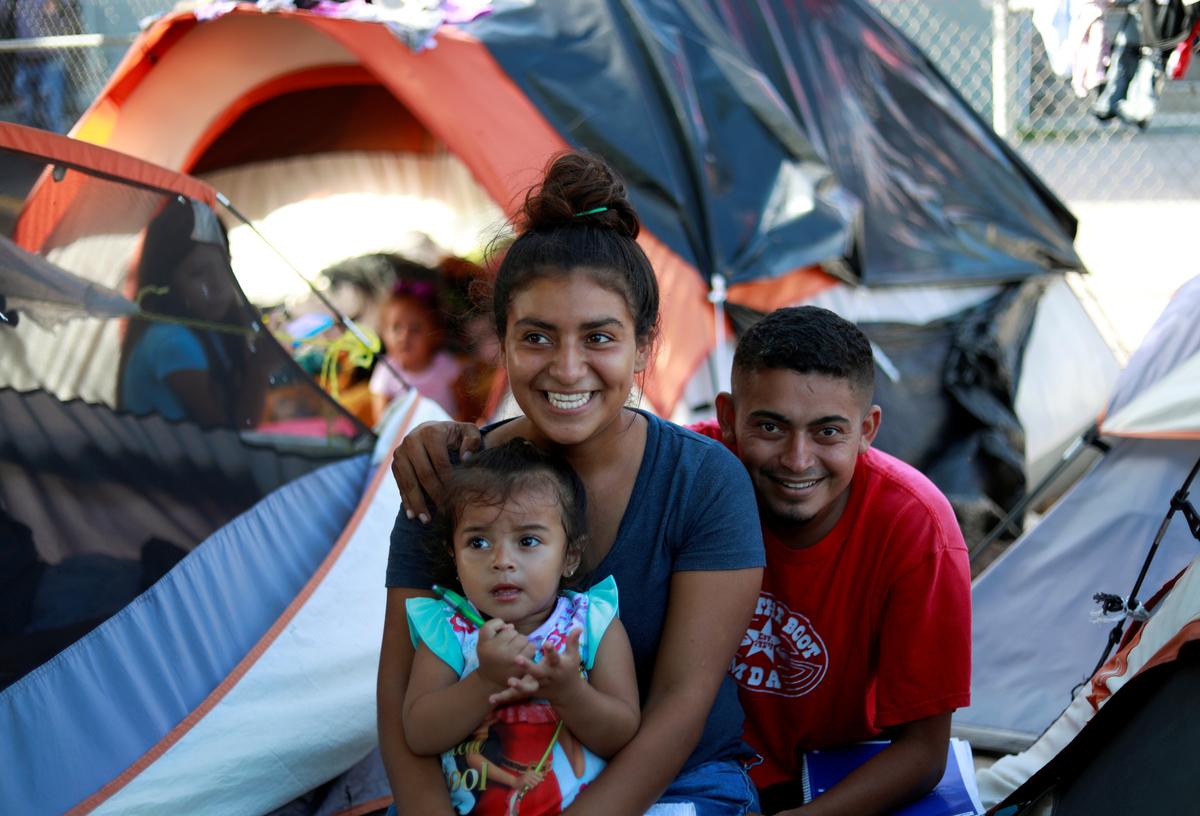 MATAMOROS, Mexico (Reuters) – Led by a dream of marrying on U.S. soil, a young Honduran couple traveled thousands of miles from […]