From March to June, thousands of nominations came in for small, family-run shops, pubs, bars and cafes through local shopping platform, Shopappy to decide on the favourite.

Judges at Shopappy said the range of nominations and quality of reviews saw The Book Nook named favourite family business of the year 2022. 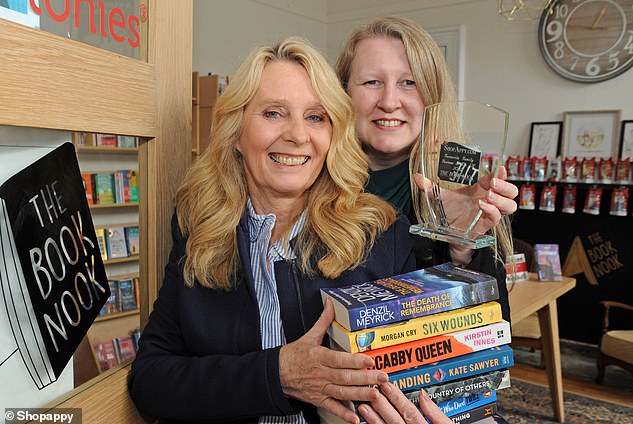 The Book Nook, was named at the UK’s favourite family business in Shopappy’s new celebration of the nations small, local businesses after receiving thousands of nominations 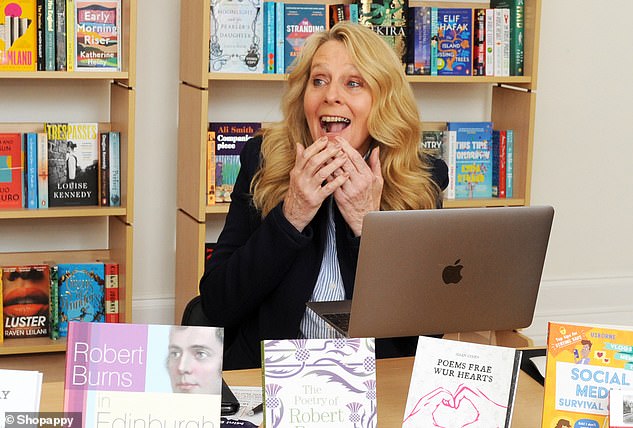 Sarah Frame, the owner for the family run store was ‘beyond thrilled’ to win family business of the year, 2022, saying ‘it won’t just be me celebrating but everyone in Stewarton’

Local reviews boasted the local bookshop as a ‘great book shop for the town’, while others celebrated it for ‘children to pick up a book instead of a screen’.

One review read: ‘They are engaging members of the community both young and old to meet up and unite through the power of literature.’

While another, said: ‘Kids love that there is a local bookshop and when they read a certain number of books they get certificates for completing them.’

A third nomination boasted: ‘The Book Nook is a fab wee bookshop.

‘As well as having an amazing variety of books for all ages, they are always getting involved in community events, starting a monthly book club which gets members of the community together.’

And one happy community member described the owner, Sarah, ‘the loveliest person [who] puts so much effort and love into her business and also the wider community.’

Sarah Frame, the owner, said she was ‘beyond thrilled’.

She said: ‘The fact that my wee tiny shop in our wee tiny town has won is incredible and it won’t just be me celebrating but everyone in Stewarton.

‘Despite being forced to shut for a number of months due to the pandemic, everyone in the town rallied around us and we are eternally grateful for that.

‘It’s great to see a whole community embrace books, adults and children alike, and each day that we’re open puts a smile on our face.’

While Dr Jackie Mulligan, founder of the local shopping platform, Shopappy, added that the ‘quality of the nominations was unsurpassed’. 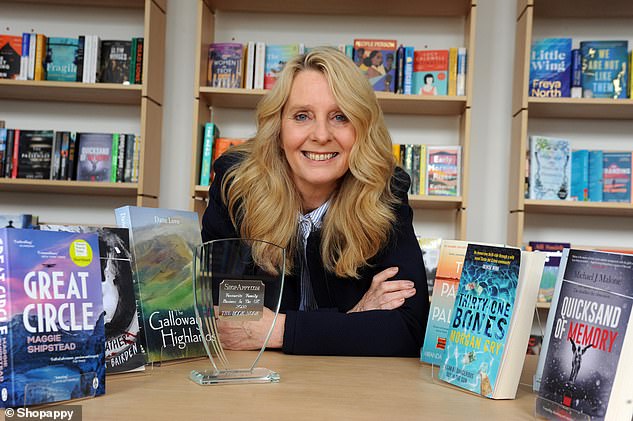 The founder of the award, Jackie Mulligan, said. ‘The Book Nook nominations really showcased what a wide range of positive impacts a small business can have on its community.’

She said: ‘We received thousands of nominations for family-run businesses around the UK and each one of them should be applauded for the value they bring to their local communities.

‘The Book Nook nominations really showcased what a wide range of positive impacts a small business can have on its community.

‘Despite being in a town of just over 7,000 people, the quality of the nominations was unsurpassed.

A number of other businesses came close to taking the crown.

These include Wheelers and Walkers, a cafe in Barnsley, and Pride and Groom, a pet grooming salon in Penistone.

Lime Coast Catering, a fish and chip van in Wimborne, Dorset, Cup and Saucer in Stanford-Le-Hope, and the Ship in Little Thurrock were also highlighed for exceptional reviews.

Mulligan said: ‘The standard of nominations was very high and all businesses should be proud of being nominated as customers took time out to write about them.’

Thousands of nominations were received for hundreds of businesses, with pet groomers claiming a majority of the top spots – showing just how much people see their pets as extended furry members of the family.

Three pet salons made it into the top 20 for favourite family businesses, including Wiffy Woofies in Ashby de la Zouch, and Cinders Canine Clippers in Sapcote. 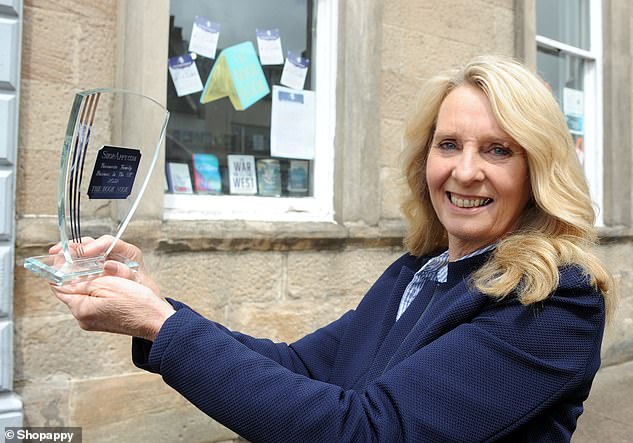 Despite being in a town of 7,000 people, the quality of the nominations was unsurpassed for The Book Nook, as locals said it engaged members of the community, both young and old.

Mulligan added: ‘We wanted to run [the competition], because family businesses are the bedrock of our communities and local economies, and they are also being hard hit by the cost of living crisis and inflation.

‘We wanted to remind these businesses that they are appreciated and draw attention to the important role they play in providing space, conversation, support in our communities.

‘We run ‘Love Local Day’ on 14 February, which asks people to nominate their most loved businesses, and this year nearly 4,000 nominations were received.

‘It is really interesting to see over time how much people value these businesses and why – their response to Covid, their community values and their ethics are increasingly important to consumers.

ShopAppy was founded by in 2016, as Mulligan and many of her friends were worried about seeing local shops struggling because of the increasing competition from online shopping giants.

She explained: ‘I realised how happy it made me feel to have these lovely shops and businesses so close by, and how enjoyable it was to shop locally where you could speak to shopkeepers about the products because they had chosen them and they had bought them.’ 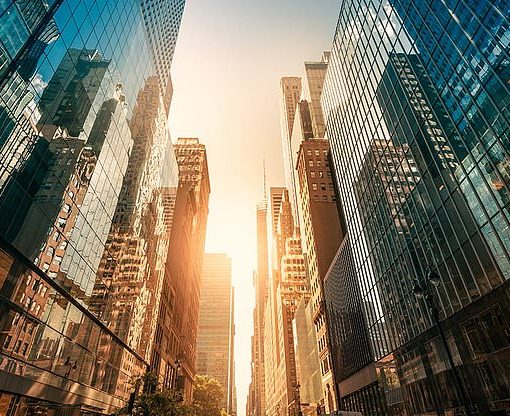 With prices in freefall, is commercial real estate an opportunity for investors – or just a trap? Not so hot property In […] It says a lot about Ryanair’s reputation for customer service that writing a column critical of it feels daft. Nonetheless, the airline […] 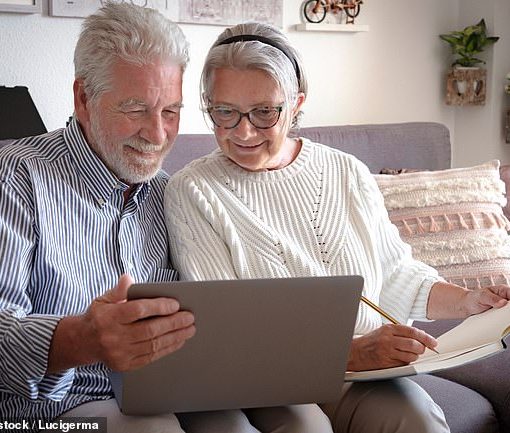 Annuity rates have jumped around 20 per cent so far this year, but bounced off such poor levels they might still be […] 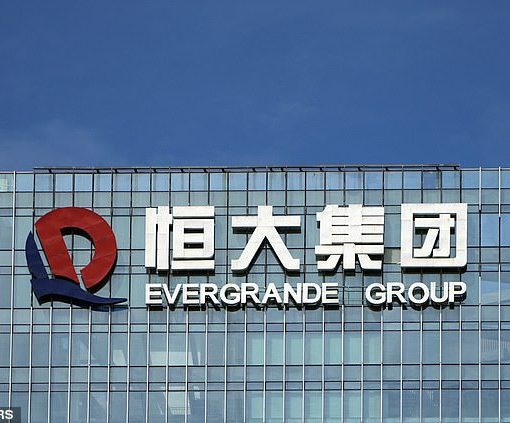