New York Gov. Kathy Hochul easily won her state’s Democratic gubernatorial nomination on Tuesday, nine months after being launched into the governor’s seat after the resignation of Gov. Andrew Cuomo.

Hochul enters the general election with a heavy advantage given that there are more than twice as many Democrats as Republicans in New York and the state has not had a Republican governor in 16 years. 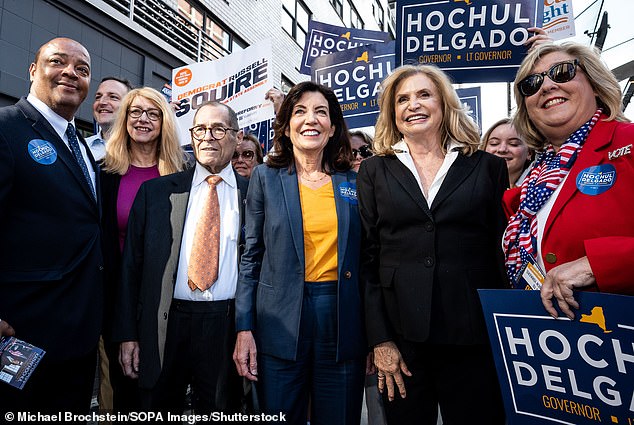 New York Gov. Kathy Hochul easily won her state’s Democratic gubernatorial nomination on Tuesday, nine months after being launched into the governor’s seat after the resignation of Gov. Andrew Cuomo 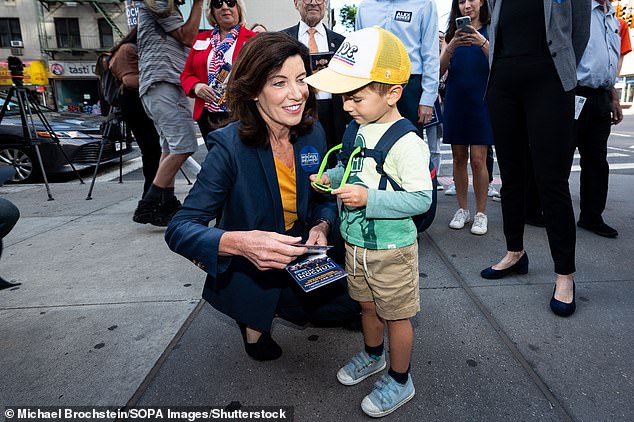 So far three incumbents have lost out, two Republicans and one Democrat. Here are highlights from Tuesday’s primaries across seven states:

Right-wing firebrand Rep. Lauren Boebert defeat her opponent state Sen. Don Coram in Tuesday’s primary in one of a number of key races on Tuesday.

Boebert, a co-chair of the Second Amendment caucus who has proudly displayed her gun collection in Zoom Congressional hearings and TV appearances, won her primary in the solid-red third district of Colorado, in a testament her headline-grabbing brand of far-right politics there.  In a speech the weekend, Boebert said she was ‘I’m tired of this separation of church and state junk’ and argued that the ‘the church is supposed to direct the government.’

Boebert’s district became more conservative after redistricting and she is expected to win in November.

But in another Colorado race, a more moderate Republican is project to beat out his rival to the right for the Senate nomination to take on Democrat Sen. Michael Bennet in the fall.

GOP businessman Joe O’Dea is projected to beat out state Rep. Ron Hanks, according to the Associated Press.

O’Dea has said he backs a federal ban on late-term abortions and federal funding of the procedure, but would leave the decision to terminate a pregnancy in the initial months ‘between a person and their God.’

O’Dea’s top rival is state Rep. Ron Hanks, who opposes abortion in all cases and attended the Jan. 6 ‘Save America’ rally before the Capitol riot.

Bennet is uncontested on the Democratic side. 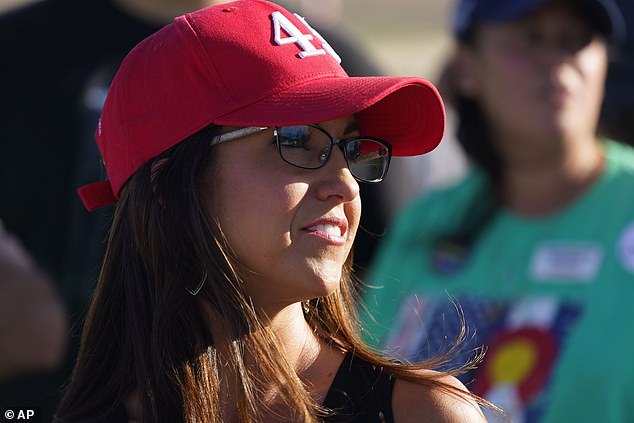 Right-wing firebrand Rep. Lauren Boebert defeat her opponent state Sen. Don Coram in Tuesday’s primary in one of a number of key races on Tuesday 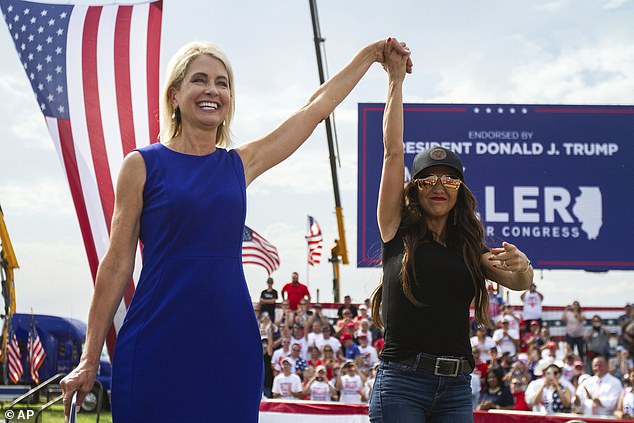 Both Rep. Mary Miller, left, and Rep. Lauren Boebert, right, both won their respective primaries in Illinois and Colorado. They are pictured above at Trump’s Mendon, Illinois rally over the weekend

Meanwhile Mississippi already had its primaries on June 7, but two Republicans were forced into a runoff after they failed to breach the 50 percent threshold, and Rep. Michael Guest is projected to win his primary against Michael Cassidy, a former Navy fighter pilot.

Guest is looking to win a third term, forced into primary after he voted to create an independent commission to investigate Jan. 6 and was criticized as disloyal to Trump.

Another Mississippi incumbent was not so lucky – former sheriff Mike Ezell is projected to beat out six-term Rep. Steven Palazzo, who had been dogged by criticism after a 2021 congressional ethics report accused his office of misusing campaign funds, doing favors for his brother and using staff for political and personal errands.

Trump’s endorsement won out for Darren Bailey, a Bible-toting, conservative farmer who curried his favor just last weekend at a rally in Illinois.

Bailey was one of a half dozen candidates in the GOP primary, and his main opponent was Richard Irvin, the mayor of Aurora, Illinois in suburban Chicago. Irvine had been backed by $50 million from billionaire Ken Griffin, but Democrats spent millions to take down his campaign, viewing Bailey as a more formidable opponent for Democratic Gov. J.B. Pritzker.

Pritzker, meanwhile defeated a primary challenge from the left in progressive Beverly Miles, a nurse and Army Vet. 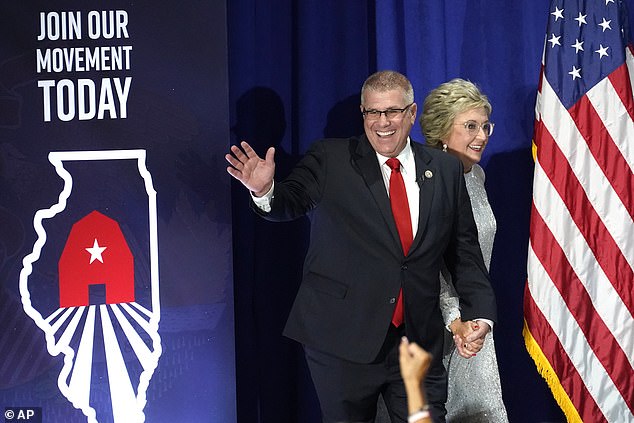 In one of two incumbent-on-incumbent races,  Rep. Sean Casten is projected to defeat Marie Newman.

While both candidates have very liberal records, Newman positioned herself as the candidate further to the left in the race, with the backing of Rep. Alexandria Ocasio-Cortez. She supports the Green New Deal and attacked Casten for voting for ‘anti-choice’ President George H.W. Bush by detailing her own experience getting an abortion in the 1980s.

In another, Trump-backed, first-term Rep. Mary Miller is projected to beat out Rep. Rodney Davis, a more moderate, five-term Republican.

GOP incumbent Sen. Mike Lee, one of former President Trump’s close allies, successfully fend off attacks, according to AP projections, from two challengers about his ties to the former president in the moderate right-leaning state.

Former state lawmaker Becky Edwards and political operative Ally Isom, both Republicans who did not vote for Trump in 2020, have accused Lee of being more concerned with TV appearances and Trump’s favor than running the state.

Both have highlighted Lee’s post-election text messages sent to Trump’s chief of staff Mark Meadows, highlighting his involvement in the election fraud conspiracy that led to the Jan. 6 Capitol riot.

Edwards, meanwhile, has said that she does not agree with the Supreme Court’s decision to overturn Roe v. Wade.

GOP Rep. Markwayne Mullin advanced to a runoff with T.W. Shannon in the race to replace retiring GOP Sen. Jim Inhofe. As of Tuesday night Mullin was safely ahead with 44 percent of the vote compared to Shannon’s 17, but did not breach the 50 percent threshold.

In the other Oklahoma GOP Senate primary Sen. James Lankford held off a challenge from Tulsa pastor Jackson Lahmeyer. 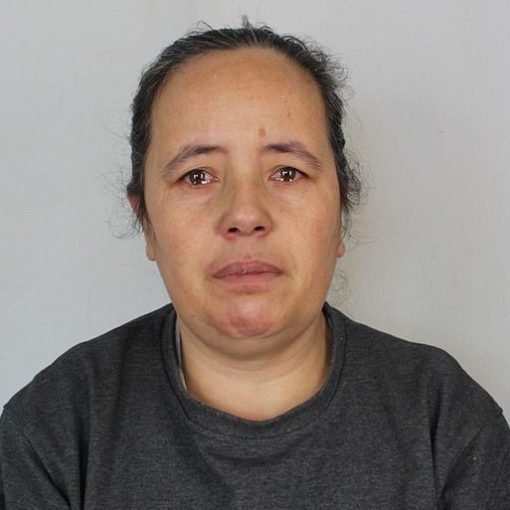 Thousands of photographs, spreadsheets and classified documents hacked from Chinese police servers have shed a horrifying new light on the terrors Uyghur […] 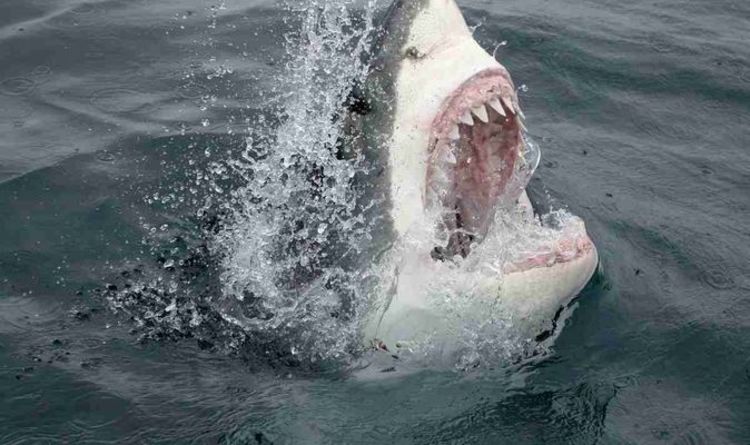 The incident happened as the boy, aged 10, was fishing with his father at sea off the island of Tasmania. The boy’s […] 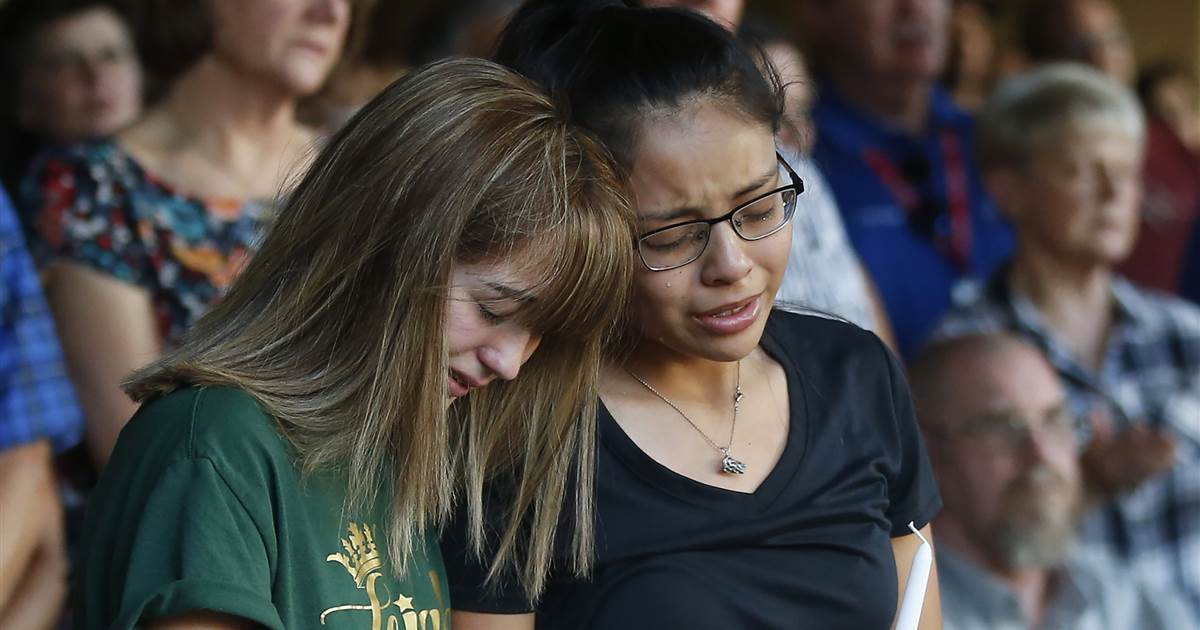 A west Texas man, on a “downward spiral,” made “rambling” calls to police and the FBI before embarking on a shooting spree […] 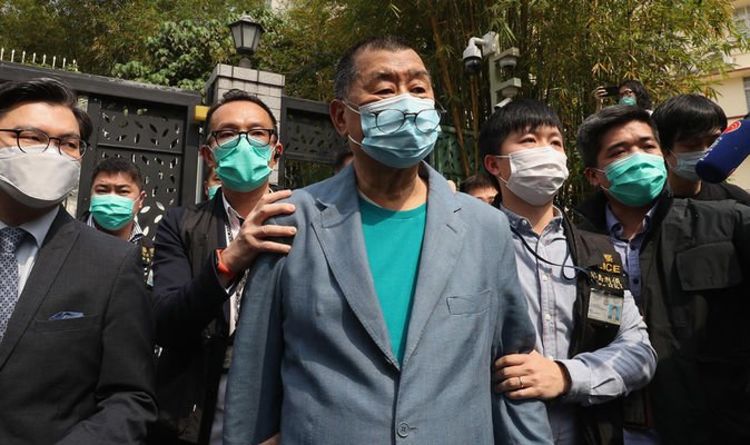 China enacted a new security law in June on Hong Kong, which allows the country to extradite political opponents and curbs freedoms […]