Los Angeles’ district attorney George Gascon has been slammed as ‘radical’ and ‘soft on crime’ after it was revealed that the man who killed two police officers on Tuesday was out on probation for a gun charge at the time due to his policies.

Flores, who was shot and killed at the scene, was on probation for a gun charge at the time of the shooting, which occurred a day after his probation officer requested that he return to court later in the month, court records show.

The case has sparked outrage, with many criticizing DA Gascon for being soft on criminals with his woke policies – and those policies meant Flores was not in jail at the time of the shooting.

Flores had a previous strike conviction in 2011 for burglary and last year he pleaded guilty to being a felon in possession of a firearm, a felony charge that could have sent him back to prison for a minimum of three years.

But instead, in accordance with Gascon’s policies, he received the bare minimum sentence of two years probation under a plea deal – and was able to be out on probation at the time he shot dead the two police officers. 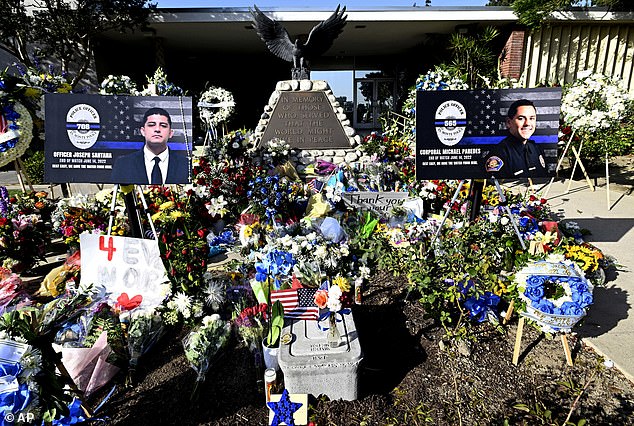 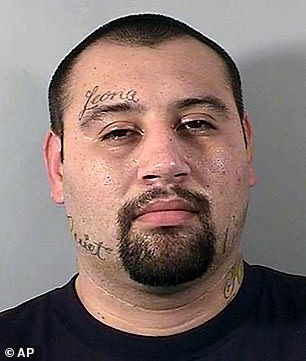 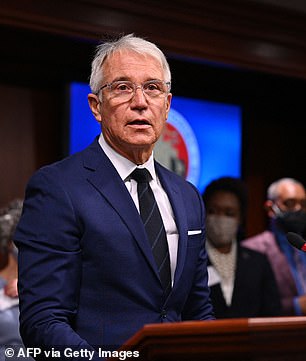 Los Angeles’ district attorney George Gascon has been slammed as ‘radical’ and ‘soft on crime’ after it was revealed that Justin William Flores, who killed two police officers on Tuesday, was out on probation for a gun charge at the time due to his policies 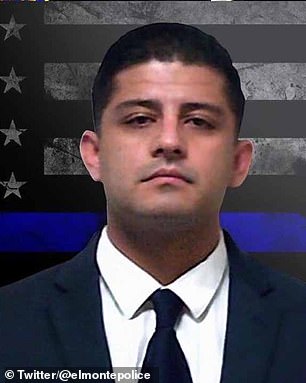 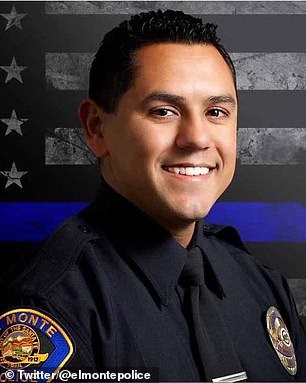 Republican Senator Ted Cruz slammed Gascon, tweeting: ‘Officers Paredes and Santana gave their lives in the service of their fellow citizens. It is outrageous the murderer was not in jail due to the reckless actions of George Gascon, a radical, soft-on-crime, Soros-backed DA.’

In response to Gascon tweeting his ‘heartfelt condolences’ to the families of the murdered officers, a Twitter user wrote: ‘Your condolences won’t bring back the lives you’re responsible for losing, nor will your condolences cover the payout these families will surely get from LA County. We, the tax payers, will be paying for that.’

One user tweeted: ‘If I were you I would save this tweet as a template so you could just edit the police department name if you’re going to keep dumping into our society these dangerous criminals. Sending condolences is part of the failure of your administration.’

Another tweeted: ‘The killer was on probation after a plea deal with you for felon with a firearm. He went on to do this.’

It comes as Gascon faces a second recall effort in less than a year to remove him from office over his controversial policies.

Meanwhile, Flores’ wife said her husband had previously attacked her and she warned Paredes and Santana that he had a gun inside a motel when they responded to a report of a stabbing. 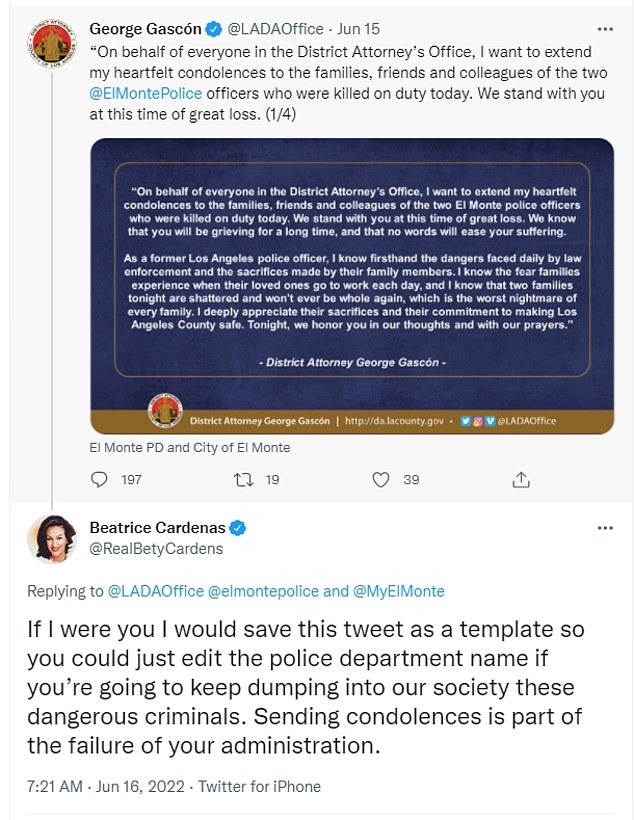 The case has sparked outrage, with many criticizing DA Gascon for being soft on criminals with his woke policies – and those policies meant Flores was not in jail at the time of the shooting

Diana Flores said he had attacked her two days ago and she had moved into the motel to escape him but he tracked her down.

‘I am so deeply sorry, my deepest condolences for saving me, I’m so, so, so sorry,’ Diana tearfully told KCBS-TV. ‘They didn’t deserve that, or their families. They really didn’t. They were trying to help me and I told them before they went in the room, `Don’t go in. He has a gun.”

The officers – Paredes and Santana, who were identified Wednesday – were both slain while investigating a possible stabbing at a motel in El Monte.

Gov. Gavin Newsom announced that flags at the state Capitol will be flown at half-staff in their honor.

Paredes and Santana – one on the force for more than two decades and the other for just months – were both were raised in and worked for the city of El Monte, a suburb of 107,000 people in the San Gabriel Valley. They became only the third and fourth officers in the El Monte Police Department’s history to die in the line of duty. A vigil is scheduled for Saturday.

Mourners on Wednesday left bouquets, wreaths of flowers and candles outside the El Monte police station to honor the fallen officers. 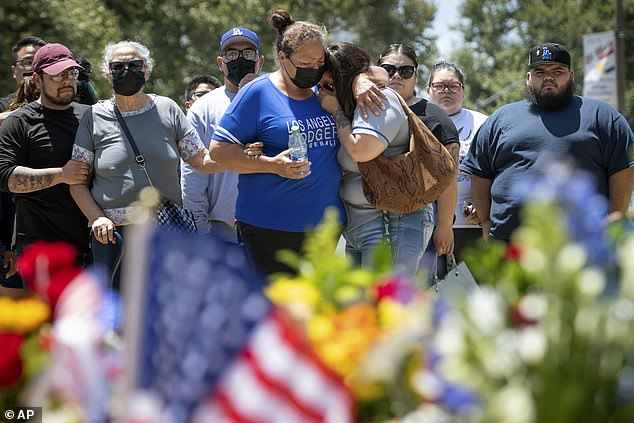 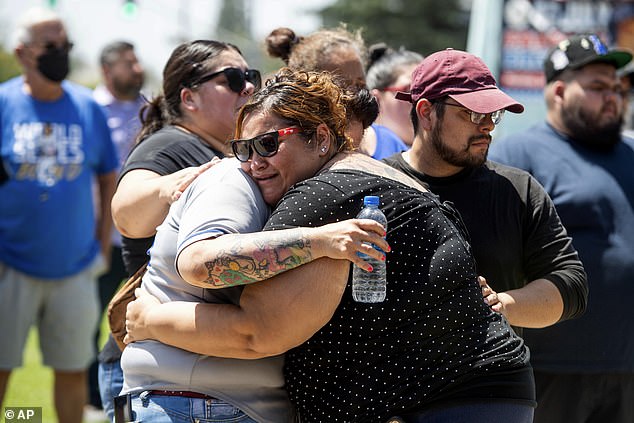 ‘Corporal Paredes and Officer Santana paid the ultimate sacrifice,’ the city of El Monte wrote in a news release, ‘while in performance of a noble profession, serving the community they loved.’

Flores, 35, served two stints in state prison for vehicle theft and burglary, according to the California Department of Corrections and Rehabilitation, and was most recently released in 2012.

Instead he was sentenced to two years of probation and 20 days in jail and LA County District Attorney George Gascon, who is facing a recall effort for his progressive policies, is facing criticism for Flores’ plea deal.

‘The sentence he received in the firearm case was consistent with case resolutions for this type of offense given his criminal history and the nature of the offense,’ the DA’s office said in a statement Wednesday. ‘At the time the court sentenced him, Mr. Flores did not have a documented history of violence.’ 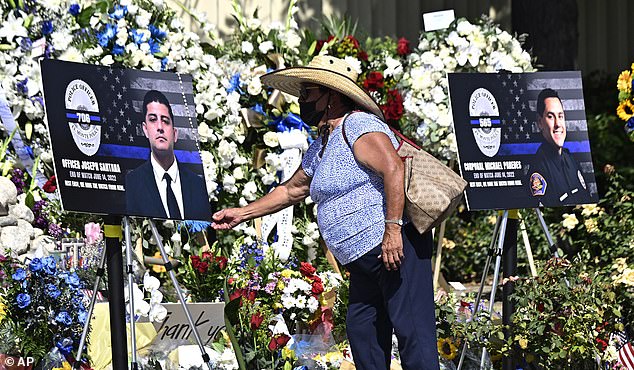 Court records obtained by AP do not specify why Flores’ probation officer had requested Monday that he return to court; records show that a hearing was scheduled for June 27.

The county’s probation department declined to comment and Flores’ attorney in the case did not return a request for comment on Wednesday. But the Los Angeles Times reported that Flores had violated his probation, triggering the return to court.

Few details have emerged about what occurred during Tuesday’s violence. The officers went to the Siesta Inn in El Monte, east of Los Angeles, around 4:45 p.m. Tuesday, for a welfare check where a woman had possibly been stabbed.

Gunfire erupted inside a motel room and the gunman then fled into the parking lot, where more gunfire was exchanged, Meyer said.

Meyer said he didn’t know whether the officers were shot inside the motel or outside. They died at a hospital. A gun was found at the scene.

Meyer said investigators were interviewing a woman from the hotel who they believe was the suspect’s girlfriend. Diana Flores, who described herself as the suspect’s wife and had his first name tattooed on her chest, told KCBS that officers must have been reacting to a ‘false call’ because she hadn’t been stabbed on Tuesday.

‘I got stabbed the day before that,’ she told the TV station. 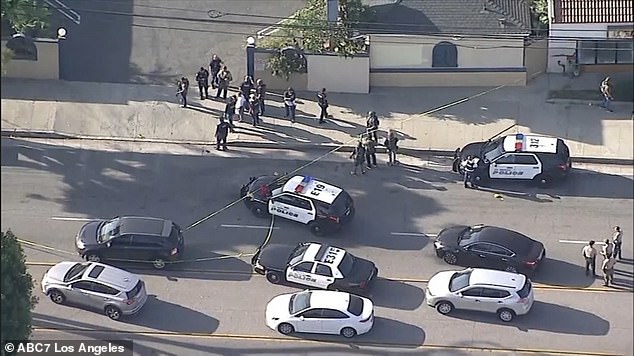 Police and emergency responders on the scene at the Siesta Inn in El Monte, east LA at 4.45pm yesterday after two cops were shot and killed

Paredes started as a cadet in the department before becoming a full-time officer in 2000, according to a news release. He is survived by his wife, daughter and son.

Santana had been with the El Monte force for less than a year when he was killed. He previously served as a deputy with the San Bernardino County Sheriff’s Department for three years, the news release stated.

This tragic loss hits close to home for us,’ the San Bernardino County Sheriff’s Department wrote on Twitter. ‘He was a great partner and loved by all who knew him.’

Santana also worked as a part-time public works employee for El Monte for six years before turning to law enforcement. He is survived by his wife, daughter and twin sons.

‘These two men were loved,’ Lowry said. ‘They were good men. They paid the ultimate sacrifice, serving their community trying to help somebody.’

‘They were murdered by a coward and we are grieving, and that hurts,’ he said.

The killings came just one day after a California Highway Patrol officer was shot and critically wounded during a traffic stop in the Studio City area of Los Angeles.

The 27-year-old officer is expected to recover, authorities said. A bloodhound helped police track down the suspect, who surrendered to police Tuesday in a homeless encampment in the San Fernando Valley. 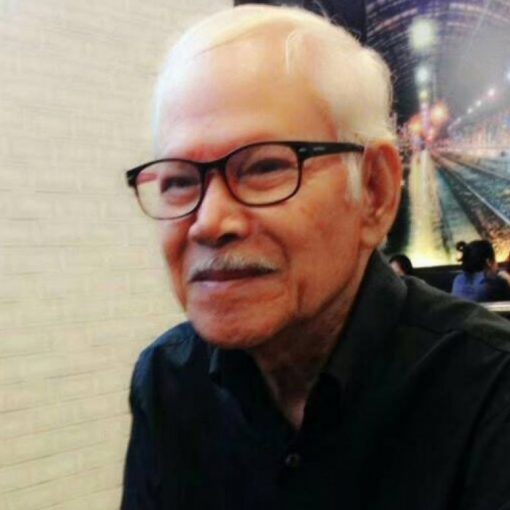 A teenager in San Francisco was allegedly caught on video while bum rushing an 84-year-old man, who later died as a result […] 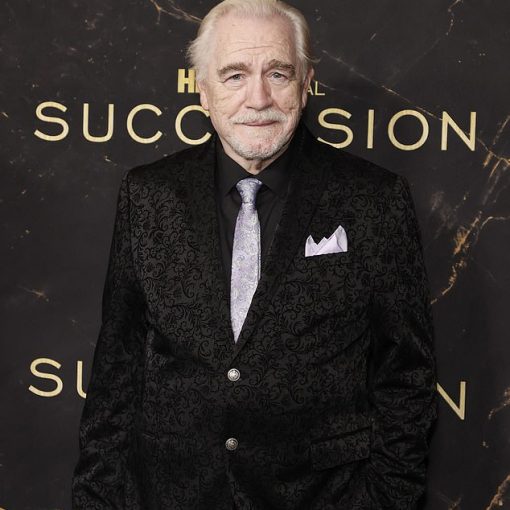 ROZNO, Slovenia (Reuters) – A wooden sculpture of U.S. first lady Melania Trump was torched near her hometown of Sevnica, Slovenia, on […]