A young woman has become the first person in the world to receive a 3D printed ear made from her own cells.

The 20-year-old, known only as Alexa from Mexico, was born with a rare birth defect that causes the external part of the ear to be small and misshapen.

Doctors hope the transplant will ‘revolutionise’ medicine by creating a treatment for people with microtia.

The rare congenital condition, in which one or both outer ears are incompletely formed, can also affect hearing.

Dr Arturo Bonilla, a paediatric ear reconstructive surgeon in San Antonio, performed the surgery by removing half of a gram of cartilage from Alexa’s microtia ear remnant and then sending it to 3DBio Therapeutics in Long Island City, Queens, along with a 3D scan of her healthy ear. 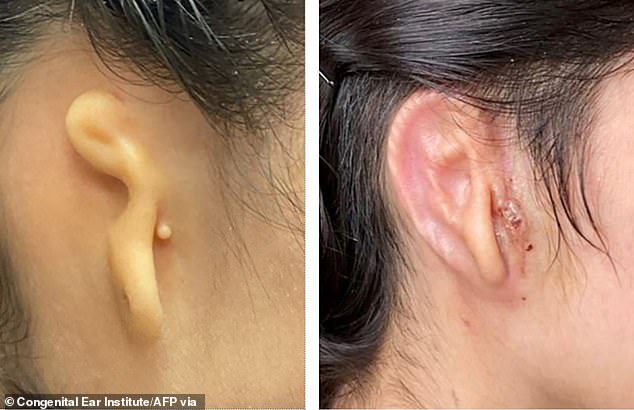 ‘Revolutionary’: A 20-year-old woman named Alexa has become the first person in the world to receive a 3D printed ear made from her own cells. Pictured left is Alexa’s ear before the transplant, while right is the results 30 days after the procedure

HOW IS A 3D PRINTED EAR CREATED?

The pioneering surgery is designed to be a treatment for people with microtia, a rare birth defect that causes the external part of the ear to be small and misshapen.

Doctors first remove half of a gram of cartilage from a patient’s microtia ear remnant.

This is then sent to 3DBio Therapeutics in Long Island City, Queens, along with a 3D scan of her healthy ear.

3DBio Therapeutics developed the implant, which is called AuriNovo.

Once with the company, the patient’s chondrocytes — cells responsible for cartilage formation — are isolated from the tissue sample and grown with nutrients to turn them into billions of cells.

These cells are mixed with collagen-based bio-ink, which is shaped into an outer ear after being inserted into a specialised 3D bio-printer.

The implant is surrounded by a printed, biodegradable shell, to provide early support, but which is later absorbed into the patient’s body.

The implanted ear is supposed to mature over time, developing the natural look and feel, including elasticity, of a regular ear.

Once there, the woman’s chondrocytes — cells responsible for cartilage formation — were isolated from the tissue sample and grown with nutrients to turn them into billions of cells.

These cells are mixed with collagen-based bio-ink, which is shaped into an outer ear after being inserted into a specialised 3D bio-printer with a syringe.

The implant is surrounded by a printed, biodegradable shell, to provide early support, but which is absorbed into the patient’s body over time.

After a while the implanted ear is supposed to mature, developing the natural look and feel, including elasticity, of a regular ear, and be a mirror replica of the patient’s healthy ear.

‘This is so exciting, sometimes I have to temper myself a little bit,’ Dr Bonilla told the New York Times.

‘If everything goes as planned, this will revolutionise the way this is done.’

He added: ‘As a physician who has treated thousands of children with microtia from across the country and around the world, I am inspired by what this technology may mean for microtia patients and their families.’

AuriNovo, as the implant is called, was developed by the company 3DBio Therapeutics.

Dr Bonilla said he hoped it would one day replace the current treatment for microtia, which involves either grafting cartilage from a patient’s ribs or using synthetic materials, porous polyethylene (PPE), to reconstruct outer ears.

He and his team said the surgery was performed as part of an early-stage clinical trial to evaluate the implant’s safety and effectiveness.

The clinical trial expects to enroll 11 patients and is being conducted in California and Texas.

Bonilla said: ‘The AuriNovo implant requires a less invasive surgical procedure than the use of rib cartilage for reconstruction.

‘We also expect it to result in a more flexible ear than reconstruction with a PPE implant.’ 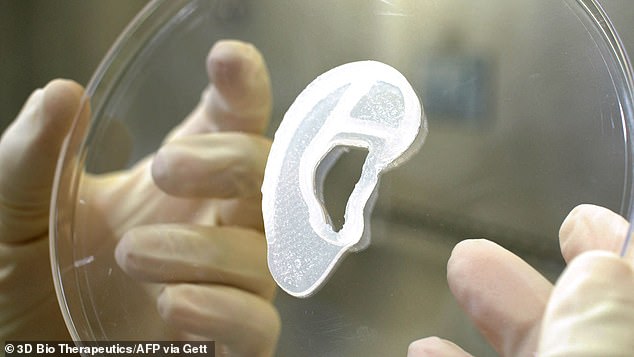 AuriNovo, as the implant is called, was developed by the company 3DBio Therapeutics

According to the Centers for Disease Control and Prevention, microtia occurs in about 1 of every 2,000-10,000 babies.

Factors that can increase risk include diabetic mothers and a maternal diet that is lower in carbohydrates and folic acid.

Boys are more likely to be affected than girls, with Hispanic, Asian, Pacific Islander and Native Americans more impacted than non-Hispanic whites.

Scientists hope 3D printed implants could also be used for other conditions involving cartilage, including nose defects or injuries, breast reconstruction, damaged meniscus in the knee or rotator cuff tears in shoulders.

‘Our initial indications focus on cartilage in the reconstructive and orthopedic fields, and then our pipeline builds upon this progress to expand into the neurosurgical and organ system fields,’ 3DBio says on its website.

First invented in the 1980s by Chuck Hull, an engineer and physicist, 3D printing technology – also called additive manufacturing – is the process of making an object by depositing material, one layer at a time.

Similarly to how an inkjet printer adds individual dots of ink to form an image, a 3D printer adds material where it is needed, based on a digital file.

Many conventional manufacturing processes involved cutting away excess materials to make a part, and this can lead to wastage of up to 30 pounds (13.6 kilograms) for every one pound of useful material, according to the Energy Department’s Oak Ridge National Laboratory in Tennessee.

By contrast, with some 3D printing processes about 98 per cent of the raw material is used in the finished part, and the method can be used to make small components using plastics and metal powders, with some experimenting with chocolate and other food, as well as biomaterials similar to human cells.

3D printers have been used to manufacture everything from prosthetic limbs to robots, and the process follows these basic steps:

· Preparing the printer, including refilling the raw materials such as plastics, metal powders and binding solutions.

· Initiating the printing process via the machine, which builds the object.

· 3D printing processes can vary, but material extrusion is the most common, and it works like a glue gun: the printing material is heated until it liquefies and is extruded through the print nozzle

· Using information from the digital file, the design is split into two-dimensional cross-sections so the printers knows where to put the material

· The polymer rapidly solidifies, bonding to the layer below before the build platform lowers and the print head adds another layer (depending on the object, the entire process can take anywhere from minutes to days.)

· After the printing is finished, every object requires some post-processing, ranging from unsticking the object from the build platform to removing support, to removing excess powders. Black-bin collections in an area with one of England’s highest recycling rates could be cut to every four weeks. South Gloucestershire Council […] 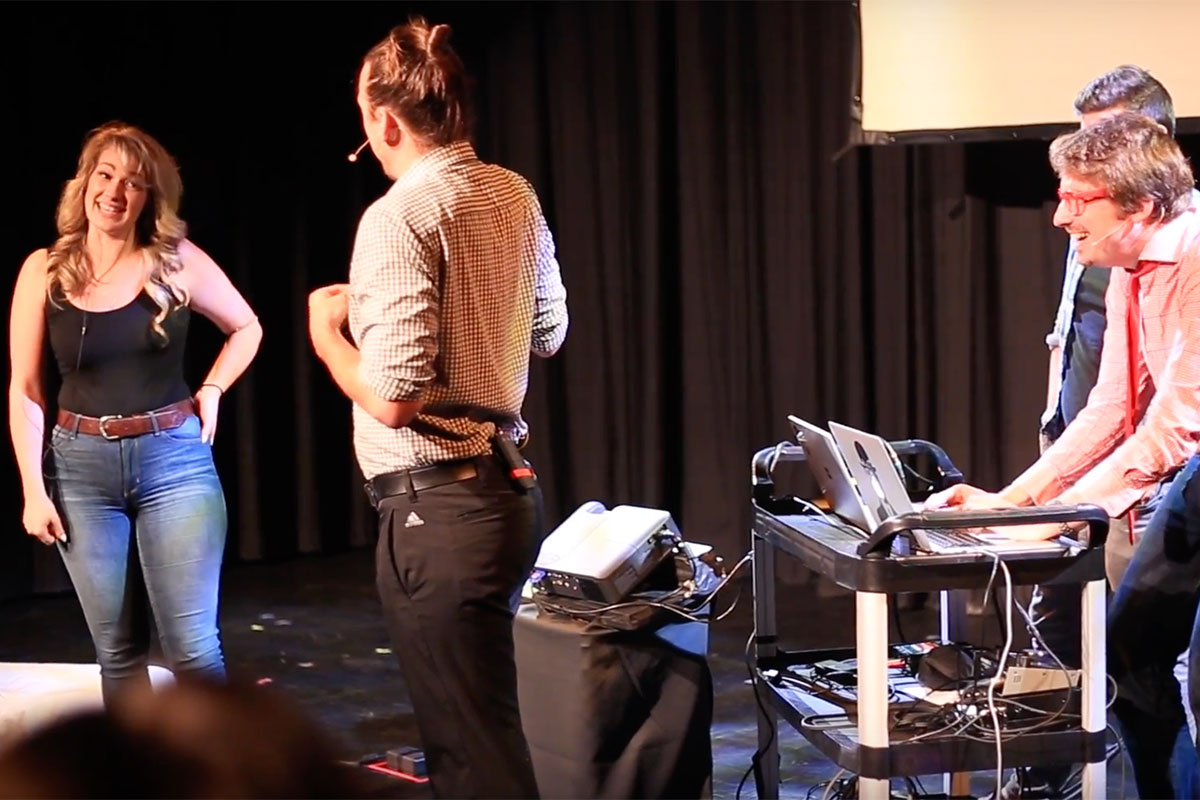 AI, or not AI — that is the questionAlessia Pannese By Frank Swain Whose line of code is it anyway? Artificial intelligence […] 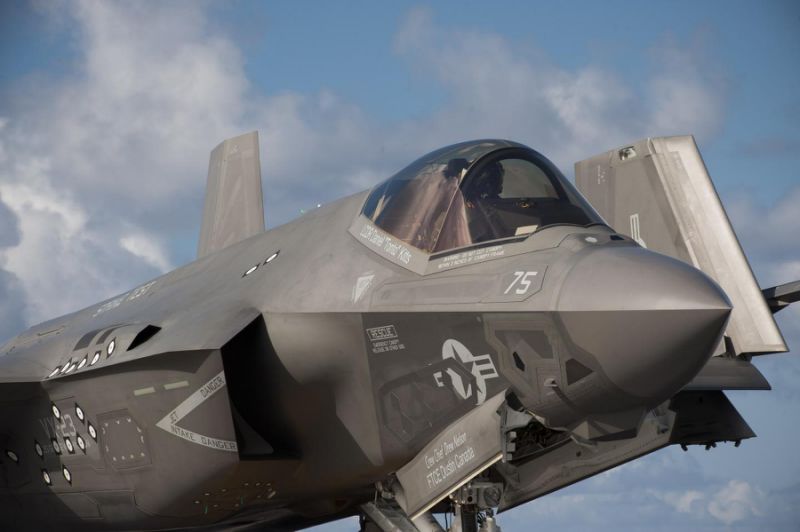 Wikimedia Commons More Sebastien Roblin Security, The Navy plans to deploy its F-35C carrier-based jets in 2019—but less than one out of […]