In a briefing with reporters, the officials confirmed CNN’s reporting on Sunday that US officials have been in regular discussions with a number of countries and companies in Europe, the Middle East, North Africa and Asia about stepping up production of liquefied natural gas to Europe if war breaks out and puts the continent’s energy supplies at risk. The White House announced Tuesday that one of those allies, Emir Tamim bin Hamad Al Thani of Qatar, will visit the White House at the end of the month.

“We are working with countries and companies around the world to ensure the continuity of supply” and to mitigate any price shocks that may come from a gas shortage, one of the senior administration officials said. That has included discussions with countries and companies that produce liquid natural gas about increasing their production and diverting supplies to Europe “on a relatively temporary basis” if a crisis breaks out.

“That review has already been done, so we have a better understanding of what the (LNG) levels are,” the official said, which will “save time in case we want to press this trigger.”

CNN reported on Sunday that the discussions were in the advanced stages.

The discussions have been aimed at reassuring nervous European allies that heavy sanctions on Russia would not result in an outsized blowback on the European economy. European allies have been particularly concerned about the potential for Russia to weaponize its gas exports to retaliate against Western sanctions.

War between Russia and Ukraine could significantly affect global energy markets. Russia is the second biggest oil producer in the world, behind only the United States. Russia also exports a large amount of natural gas to Europe through Ukraine, and those exports would likely be severely disrupted by a war and damage to critical energy infrastructure.

Russia currently provides Europe with more than 40% of its natural gas supply, according to Eurostat, the European Union’s statistical office. In certain circumstances, officials said, Europe has a storage of liquified natural gas that it could tap into, and European officials have been exploring how much of a buffer that could provide.

Another senior administration official on Tuesday discussed the willingness of the US and its allies to impose export control restrictions against Russia if it invades Ukraine, that would deny technology to Russia “that it needs and cannot easily replace.”

“If you step back and look at the global dominance of US-origin software technology and tooling, the export options would hit Putin’s strategic ambitions to industrialize his economy quite hard,” the official said.

He added that the US and Europe remain “unified” in their intention to “deliver severe consequences” to Russia if it attacks Ukraine even if the US and EU actions are not “identical” in nature.

“The convergence between the US and EU on financial sanctions is remarkable,” the official said, adding that the US believes Europe is “ready to take unprecedented measures.” The official noted that the European banking sector is “in much better shape” than it was in 2014 when Russia annexed Crimea.

European countries would not receive Russian oil, gas and metals if Russia is disconnected from the SWIFT global payment system, Nikolai Zhuravlev, vice speaker of the Federation Council — the upper house of the Russian parliament — said Tuesday, according to Russian state media TASS.

“If Russia is disconnected from SWIFT, then we will not receive (foreign) currency, but buyers, European countries in the first place, will not receive our goods — oil, gas, metals and other important components of their imports,” Zhuravlev was quoted saying by the state media.

Earlier on Tuesday, British Prime Minister Boris Johnson told lawmakers that his government was discussing with the United States the possibility of banning Russia from the SWIFT network if it invaded Ukraine.

“There is no doubt that that would be a very potent weapon (against Russia). I’m afraid it can only really be deployed with the assistance of the United States though. We are in discussions about that,” Johnson said.

Russian official Zhuravlev said to ban Russia from the SWIFT, it would need a united decision of all participating countries and not just the UK and the US.

“SWIFT is an European company, an association of many participating countries. To make a decision on disconnection, a united decision of all participating countries is needed. The decisions of the United States and Great Britain are definitely not enough. I’m not sure that other countries, especially those whose share of trade with Russia is large in balance, will support the shutdown,” Zhuravlev said, according to TASS.

The US is warning a potential Russian invasion of Ukraine could be imminent. As many as 8,500 US troops have been put on heightened alert for a possible deployment to Eastern Europe as Russian troops amass on Ukraine’s border.

Sending military reinforcements to Eastern Europe could provide deterrence and reassure allies. There hasn’t been any suggestion US combat troops would deploy to Ukraine or take part in any combat roles.

The State Department on Sunday reduced staffing at the US embassy in Kyiv, Ukraine, with the departure of nonessential staff and family members out of “an abundance of caution.”

Biden discussed concerns over the Russia and Ukraine situation in a secure video call Monday with European leaders. The group went over diplomatic efforts to prevent an invasion and preparations to punish Moscow should one proceed.

That included “preparations to impose massive consequences and severe economic costs on Russia for such actions as well as to reinforce security on NATO’s eastern flank,” the White House said in a readout of the call. The US has made clear it is prepared to impose crushing economic sanctions on Russia and effectively cut Russia off from the Western economy in the event of an invasion. 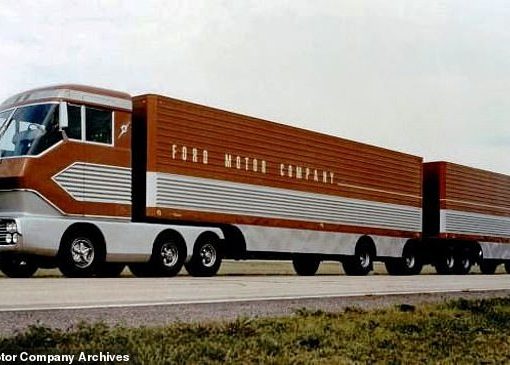 When it was unveiled at the 1964 World’s Fair in New York City, Ford’s monolithic turbine-powered truck – affectionately dubbed ‘Big Red’ […]