Lyon are DOCKED a point after Marseille’s Dimitri Payet was hit by a bottle from the stands, causing the game to be abandoned – and the Ligue 1 side is forced to play the rearranged match behind-closed-doors


Ligue 1 have hit Lyon with a one-point deduction and a match behind closed doors after Marseille’s Dimitri Payet was struck by a bottle thrown from the stands last month.

The fiery match-up between Lyon and Marseille descended into chaos when former West Ham midfielder Payet was hit by a projectile from Lyon’s fans.

Payet was about to take a corner kick in front of the home fans at the Groupama Stadium, when he was hit by an object launched towards the pitch. 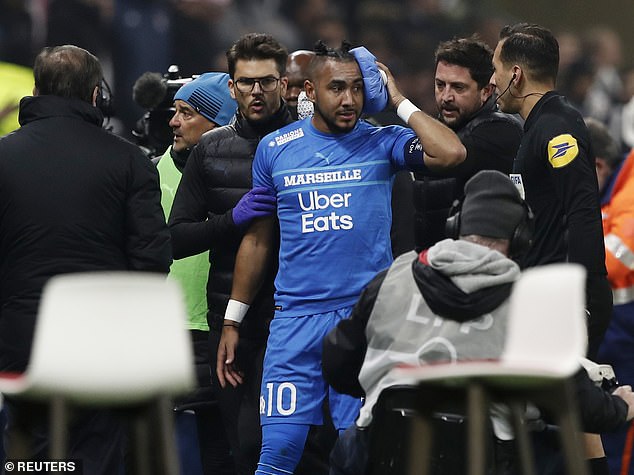 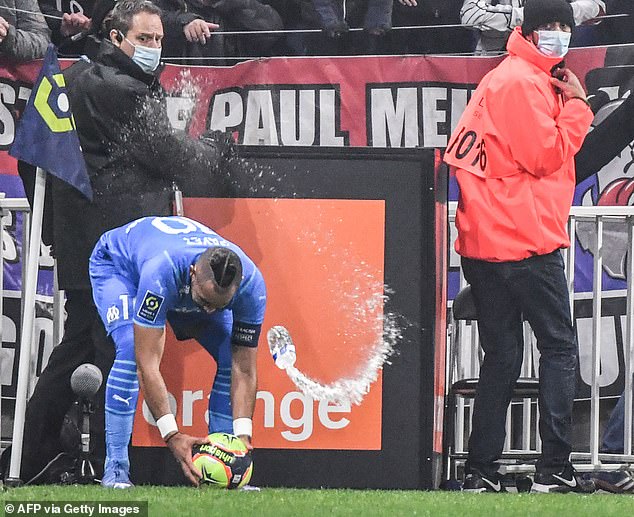 Lyon vs. Marseille is brought to a halt after Dimitri Payet was struck on the side of the head by a water bottle thrown from the stands �� pic.twitter.com/RHQtbE0VJK

He immediately appeared hurt, clutching his head in his hands and taking a few gingerly steps, before falling onto the turf, and Lyon have paid a heavy price after the match was abandoned.

The French League (LFP), who deals with disciplinary proceedings, described the incident as a ‘cowardly attack’. Lyon themselves tried to say it was an ‘isolated act’.

‘Any act of violence against a player, especially a major player, exposes the club responsible to a loss of points,’ Sebastien Deneux, the president of the LFP disciplinary committee, said.

‘The committee also took into consideration the actions of the Lyon club immediately after the incidents.

‘I would like to remind you that the Disciplinary Committee cannot take sanctions against fans directly, but is there to judge the responsibility of the clubs.’ 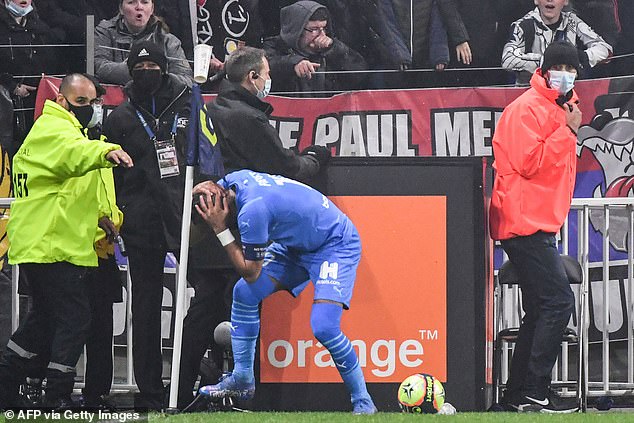 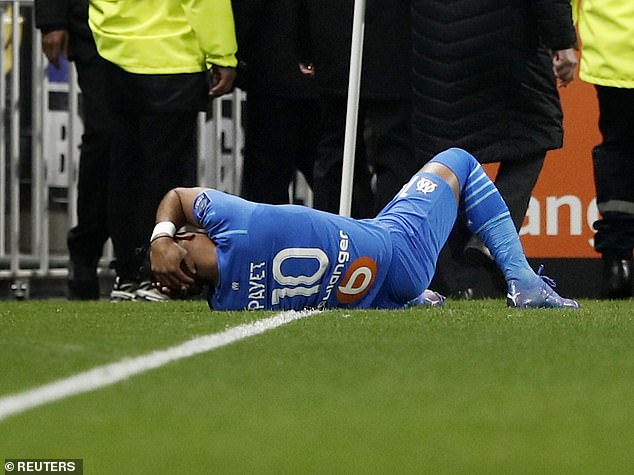 Payet fell to the turf in agony, before being attended to by his teammates and the medical staff

The fan who threw the bottle at Payet has been handed a suspended six-month jail term and could also be banned from the Groupama Stadium for five years.

Lyon president Jean-Michel Aulas criticised the decision to abandon the match at the time.

‘The referee first said that the game could restart and he changed his mind after the violent reaction of Marseille, notably that of their coach,’ he said.

‘I believe the conditions were met to resume the game after the individual had been arrested. He is in police custody.’

His Marseille counterpart Pablo Longoria said Payet was ‘psychologically affected’ by the incident and explained that the club had asked Buquet to check on their players before potentially resuming the game.

‘We asked him to check on our players’ psychological state. He did not wish to go and see the players.’

It is not the first time this season that a team has been handed a points deduction for a game involving Marseille. 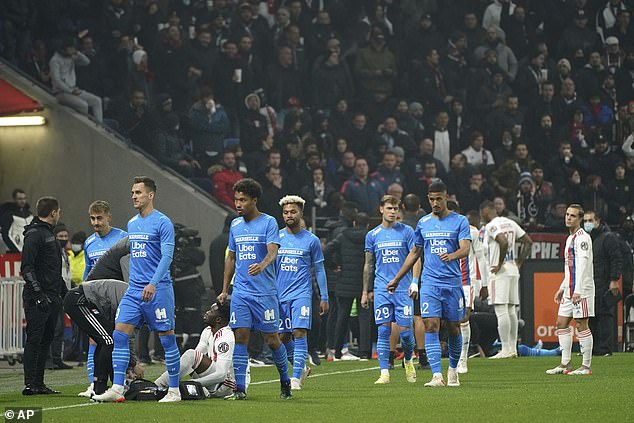 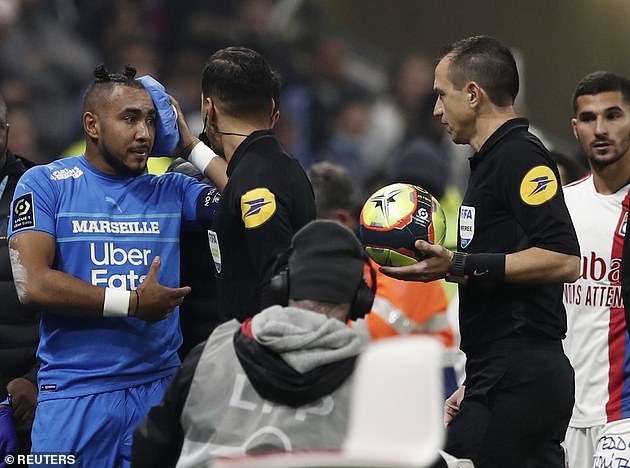 Back in August, Nice were handed a two point deduction, one of which was suspended, after their clash with Marseille was overshadowed by fan trouble.

Marseille players clashed with Nice fans, who had thrown missiles at them before storming on to the pitch.

Payet, agains involved, reacted angrily to being struck by a projectile thrown by Nice’s fans and he had to be held back by some of his team-mates, but still managed to throw the bottle back into the stands.

That gesture sparked an angry reaction from Nice fans, who breached the security cordon formed by the stewards and stepped onto the pitch to confront the former Hammers man.

As furious supporters stepped onto the pitch, the referee was forced to suspend the game, while Marseille players and staff stepped in to defend Payet and a fight broke out involving players and staff from both teams, fans and stewards.

Lens against Lille, a derby match, was overshadowed by fan trouble while Montpellier, Angers, Marseille and St Etienne have also had to contend with supporter violence this season. 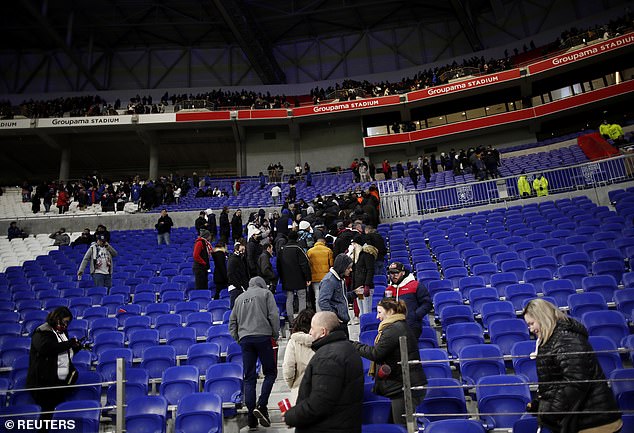 Ultimately, the game was called off and fans will not be able to attend the rearranged match 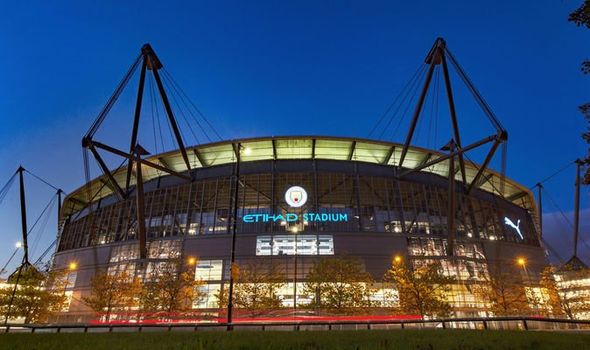 Manchester City’s game with Arsenal on Wednesday has been postponed as a precautionary measure due to the coronavirus outbreak. source: express.co.uk

Keep it solid and pounce on the counter-attack: that seems to be the unsurprising strategy put forward by Solskjaer, if his team […] 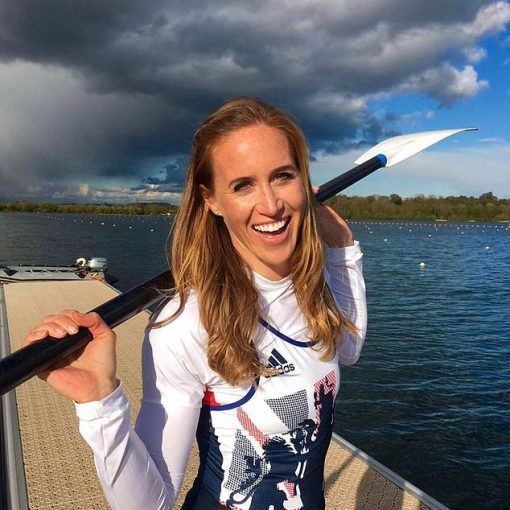 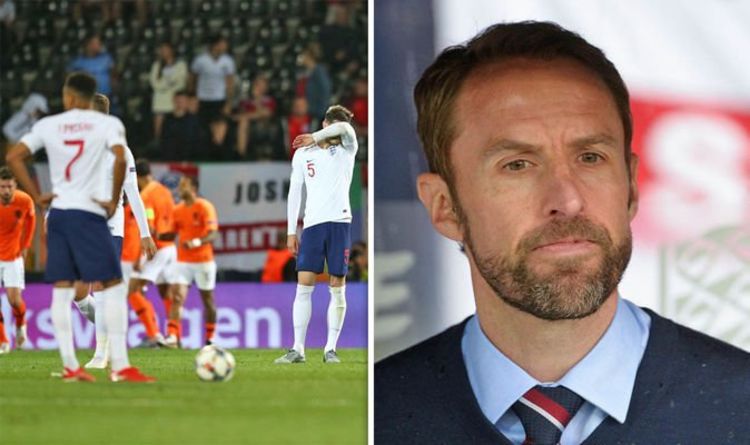