Shocked witnesses recounted the terrifying moment a red SUV sped down the street hurling bodies in the air and narrowly missing a young girl before killing multiple people during a Christmas parade outside Milwaukee on Sunday.

People at the scene described the disturbing scene in Waukesha, Wisconsin as the vehicle barreled down the road along the parade route running over people as the crowd quickly turned frantic.

Paradegoers remembered a frantic scene of ‘crumpled’ bodies, broken limbs, and ‘fragments of brains’ as many people were left dead or injured in the streets.

In another heart-stopping moment, a video from the scene showed a young girl dressed in all pink dancing along to the music on the side of the street  as the red SUV approaches at speed behind her. Thankfully, the car misses her by inches as the crowd screams.

Moments later, the car collided with the crowd, leaving five people dead and injuring 40, including several  children who were rushed to six different hospitals in the area.

A person of interest is now in custody, according to police.

‘We have a person of interest that we are looking into at this time,’ Waukesha Police Chief Dan Thompson told reporters. Thompson said that the SUV rammed into the crowd at 4:39pm local time – 39 minutes after the parade started. 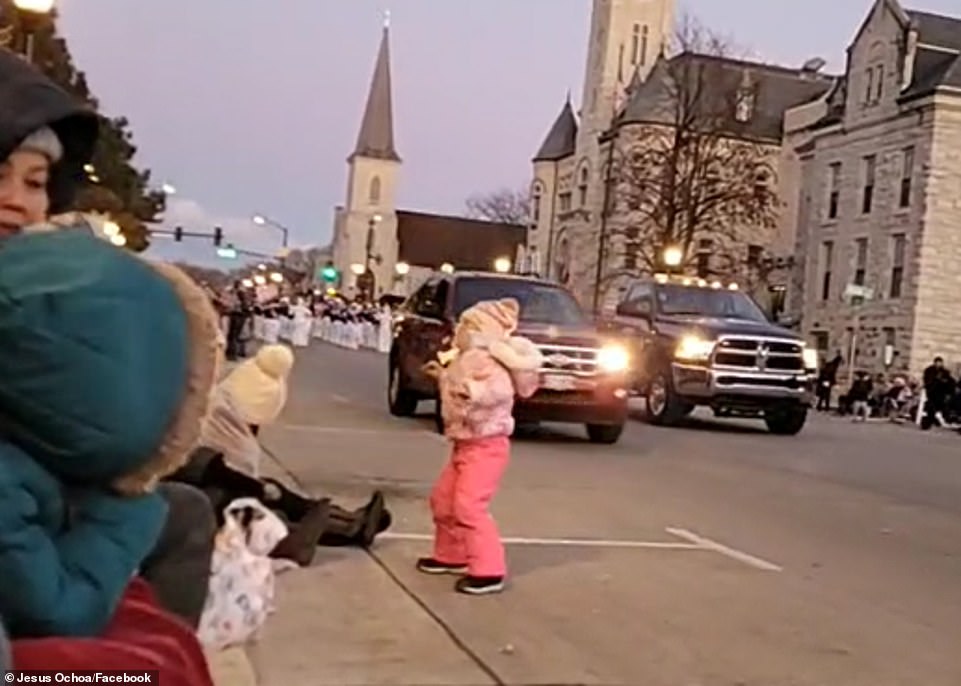 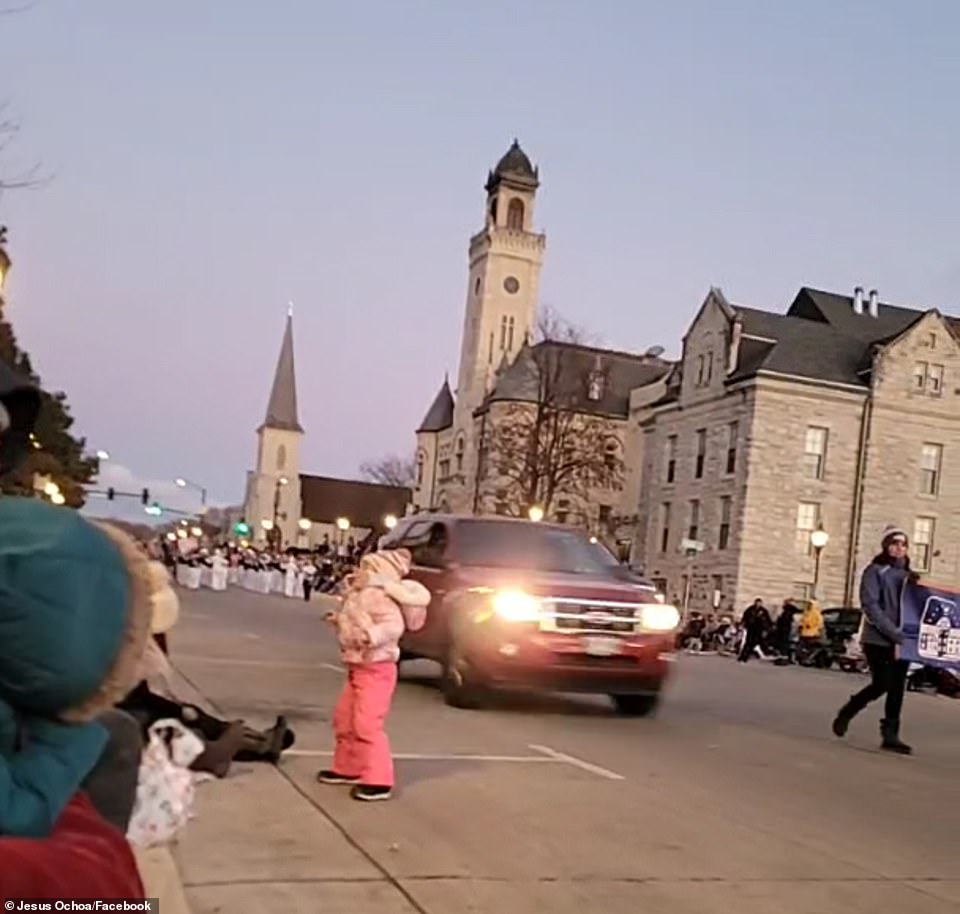 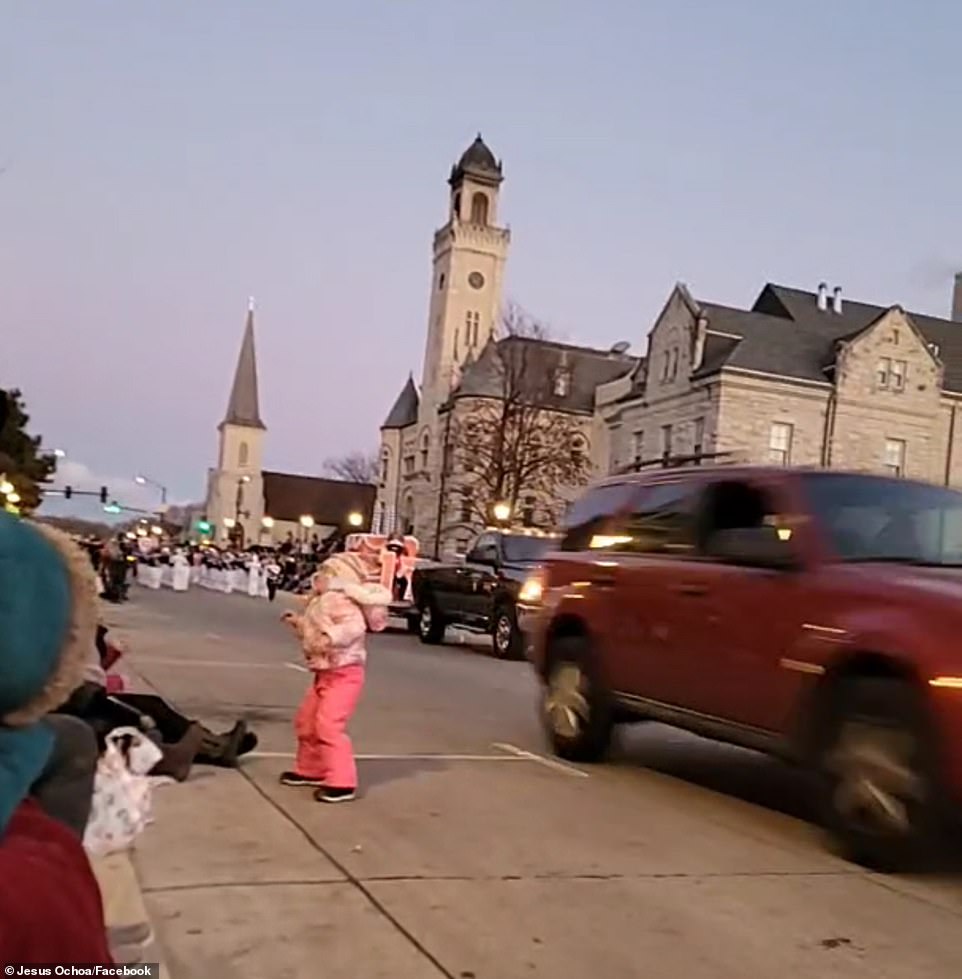 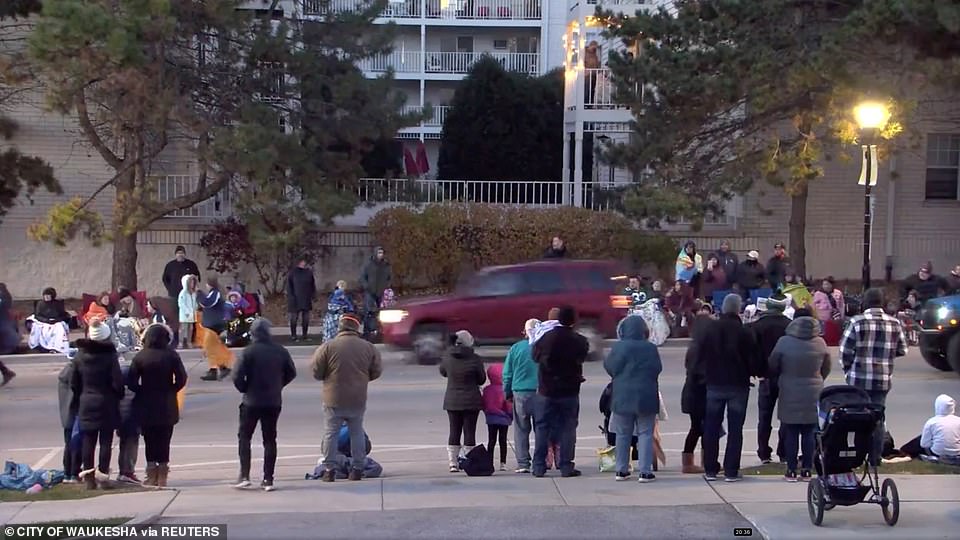 The image above shows a red SUV driving at high speed through a holiday parade in downtown Waukesha, some 20 miles west of Milwaukee, on Sunday evening 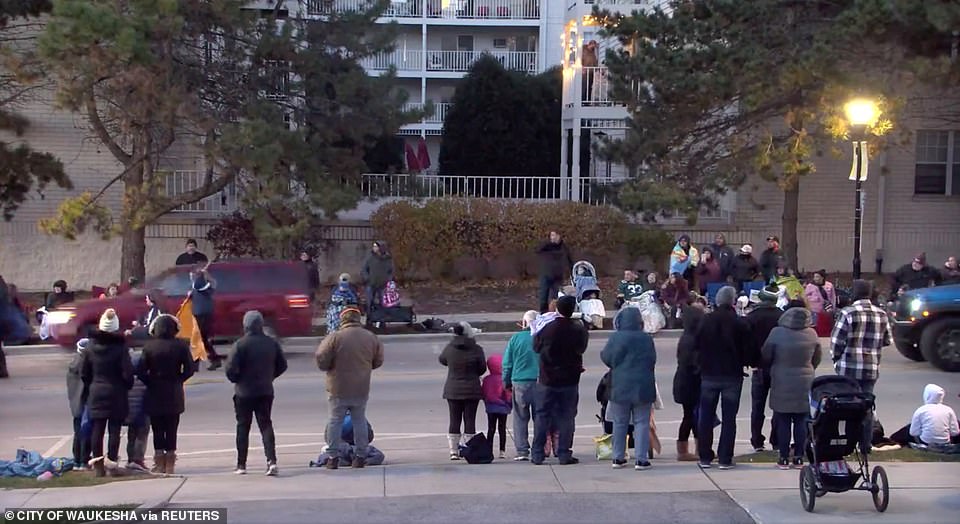 Witnesses said that the paradegoers initially thought that the red SUV was part of the procession. It was only after the vehicle was running over people did they realize that something was wrong 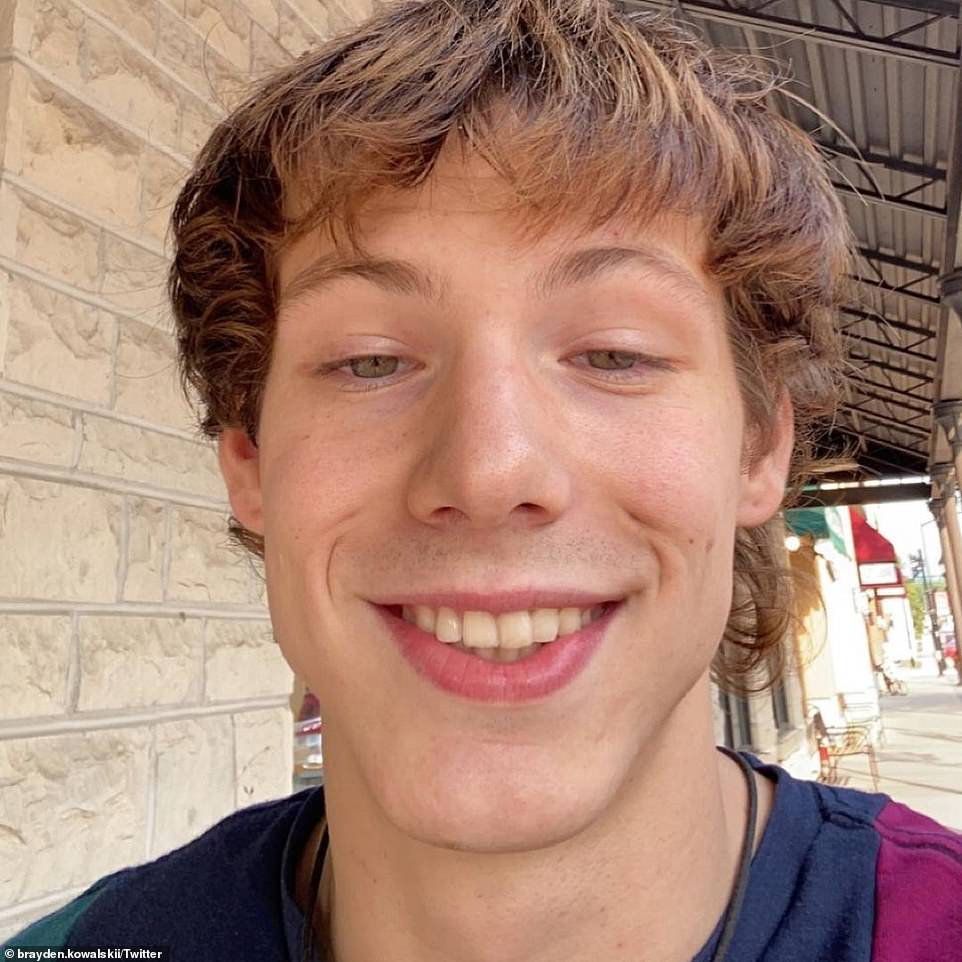 Brayden Kowalski, a 19-year-old from Waukesha, described the horrifying scene as he watched the parade with his family 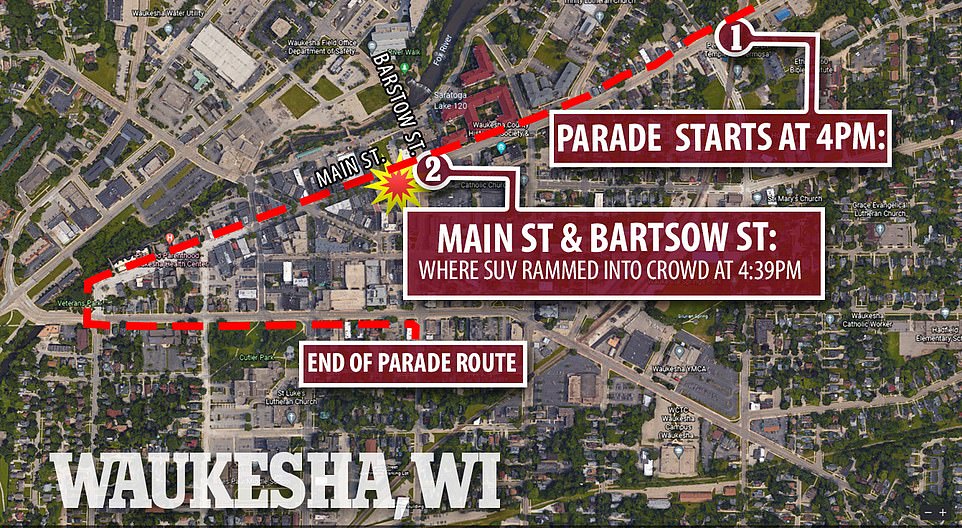 Brayden Kowalski, a 19-year-old Waukesha native, said that he was at the parade with his family when he saw: ‘bodies flying everywhere.’

‘He’s just blowing through people, kind of just dinging a lot of people, bodies flying everywhere,’ Kowalski told Fox News. ‘These people didn’t get run over, they got f**king thrown through the air. Like a lot of people got tossed up into the air.’

‘You could see the fragments of brains,’ he said. ‘There were quite a few people with broken limbs, like a lot of broken legs, a lot of people shouting with broken legs. It was horrifying.’

Melinda, a 36-year-old kindergarten teacher, told the New York Post she was watching the parade from her apartment on West Main Street when she saw the red SUV speed through the crowd.

‘I ran downstairs and it was just kids on the ground and everyone freaking out,’ Melinda, recounted. ‘Everyone was screaming and crying…it happened so quickly.’ 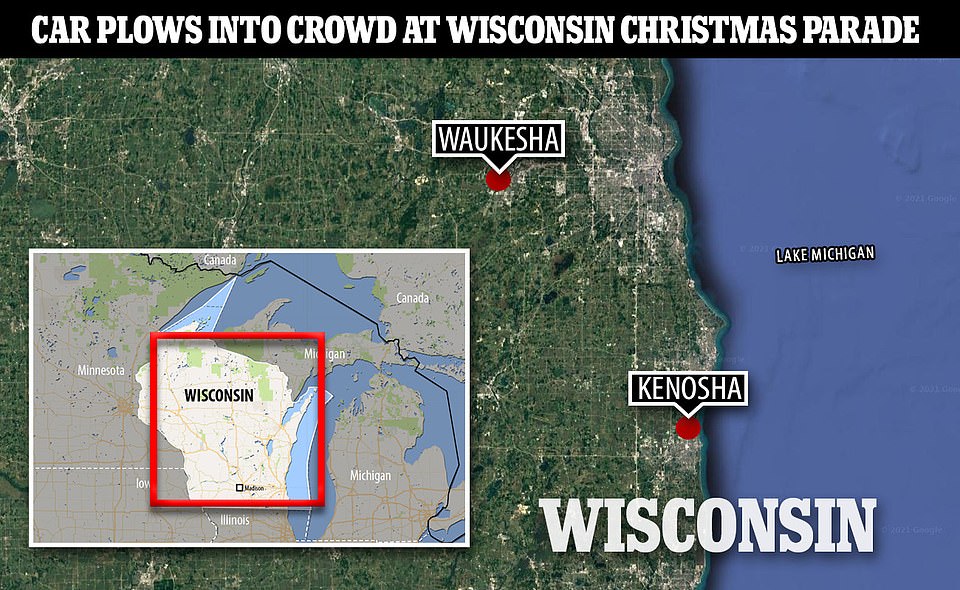 The incident comes just two days after Kyle Rittenhouse, the accused Kenosha shooter, was acquitted of murder charges in the deaths of two men during the unrest that erupted last year in the wake of a police shooting of a black man. Kenosha is located about 55 miles south of Waukesha 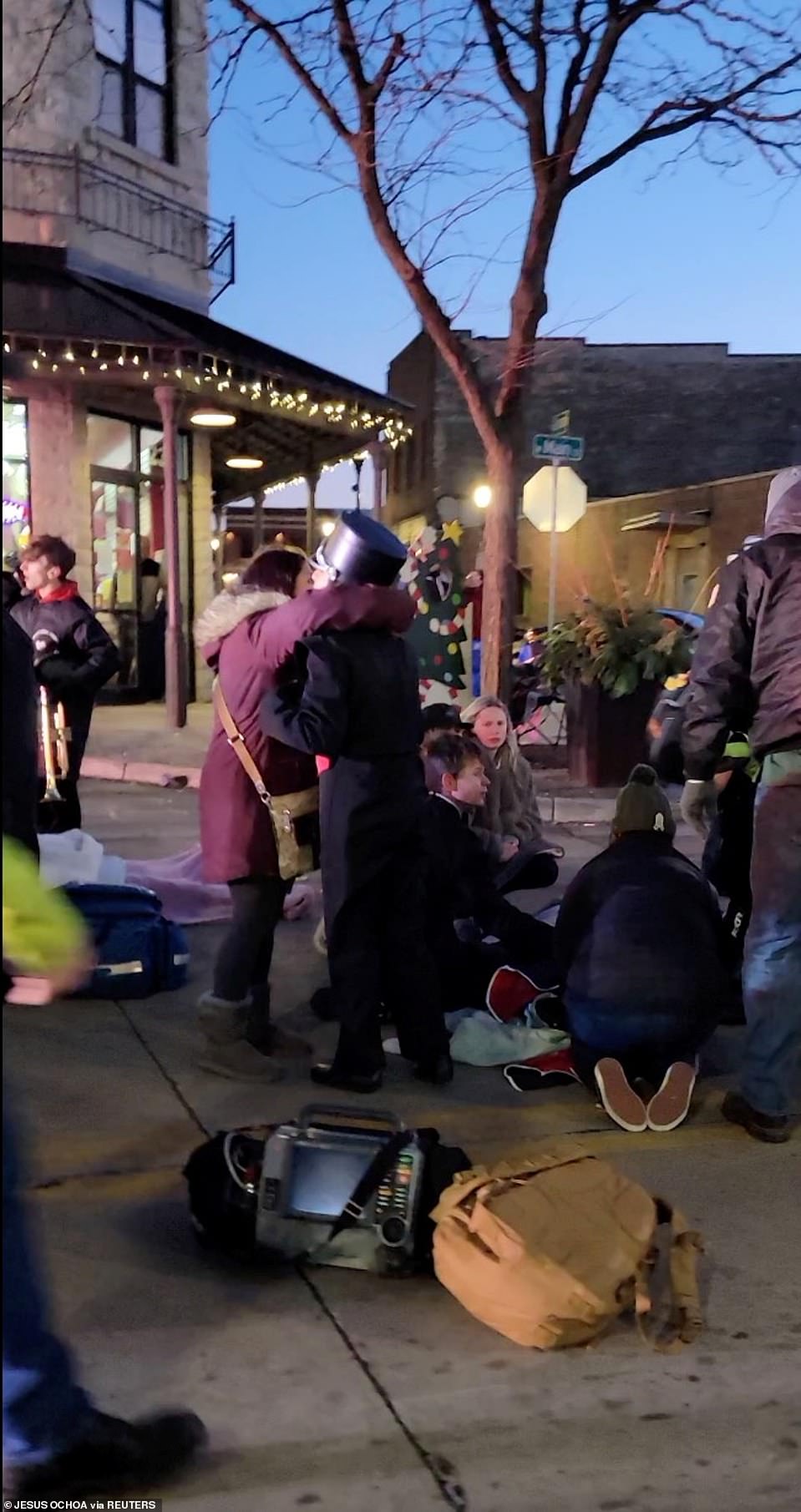 Paradegoers are seen gathered in the aftermath of a local Christmas parade that turned deadly when a red SUV sped through the parade route in Waukesha, Wisconsin 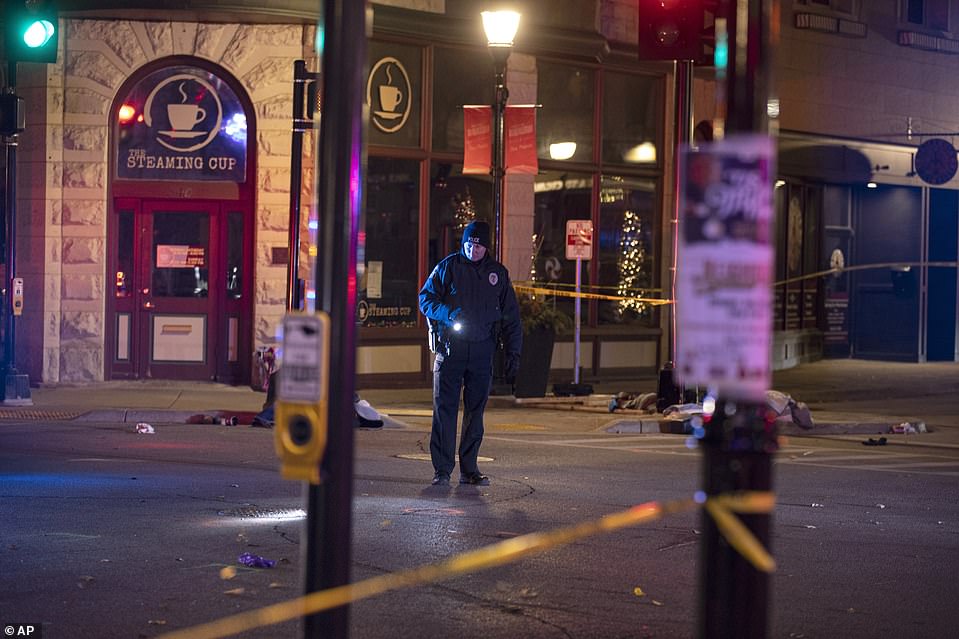 ‘It was just chaos. You don’t expect something like that to happen here. It’s Waukesha. It’s really safe. You don’t see that here.’ 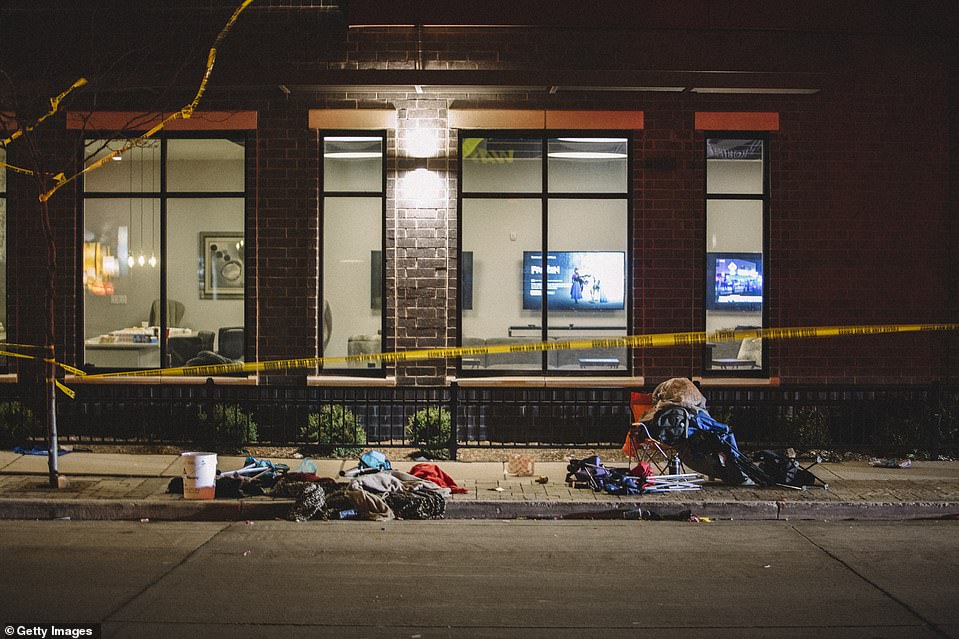 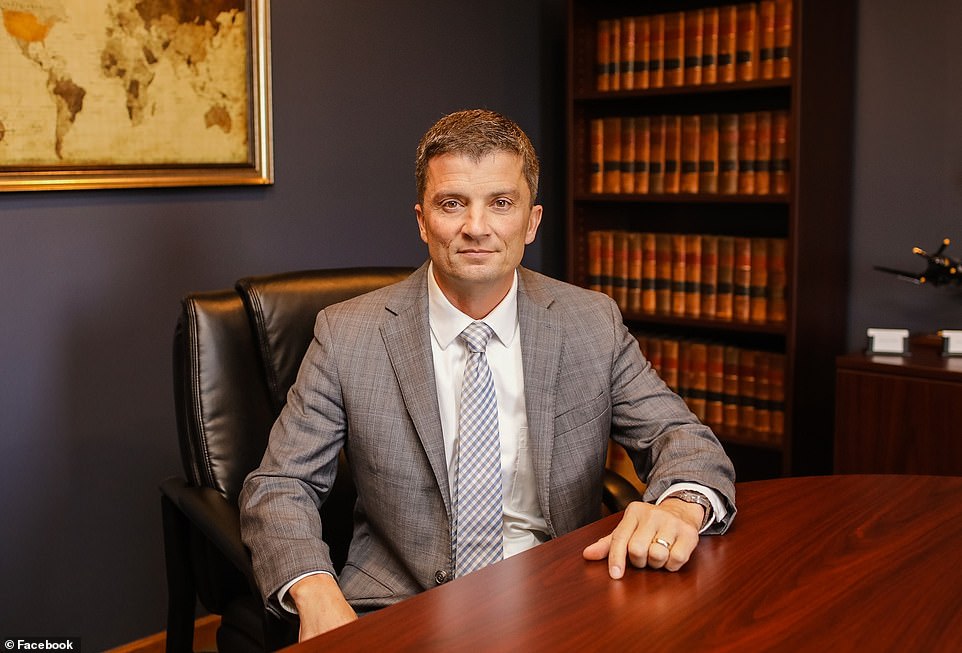 Corey Montiho, a Waukesha school district board member, went ‘from one crumpled body to the other’ as he searched for his daughter who was nearly hit by the SUV 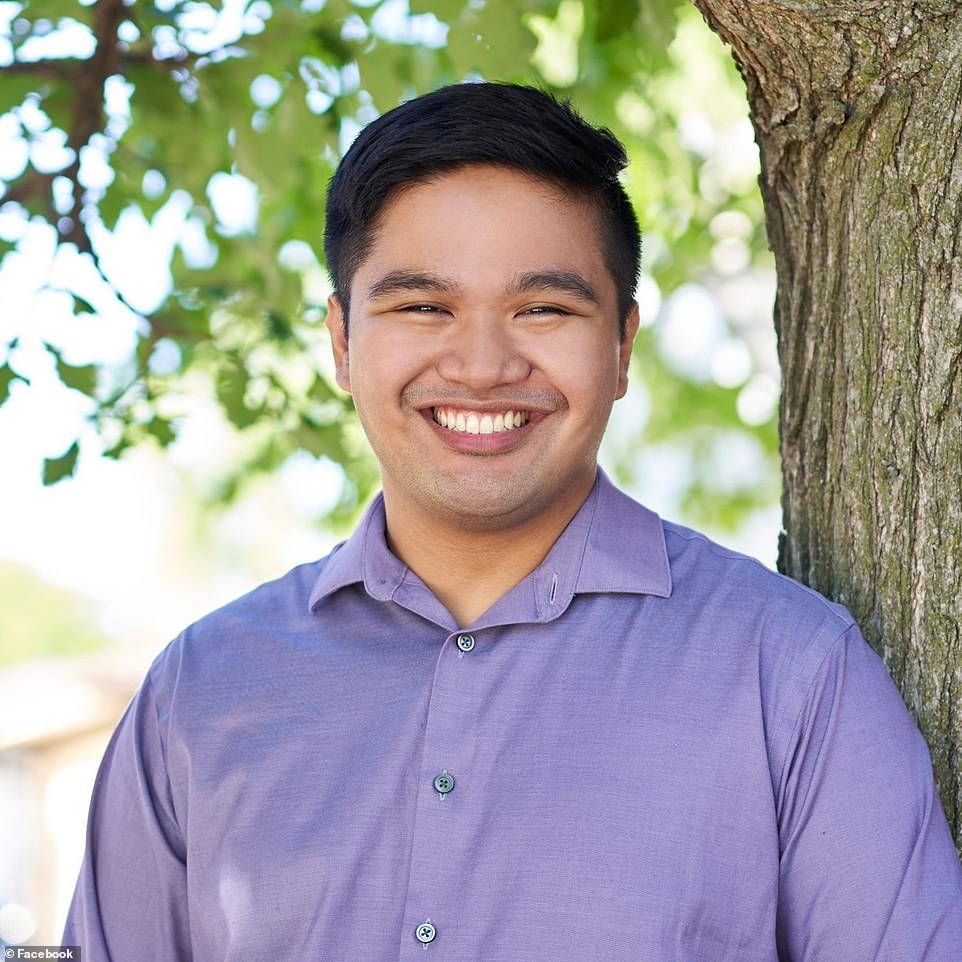 Angelito Tenorio, a West Allis alderman who is running for Wisconsin state treasurer, heard ‘deafening cries and screams from people’ who were hit by the speeding vehicle

From her window she saw ‘a little girl get hit and go flying’ in the town’s Five Points area.

Melinda Schultz, 33, of Waukesha had been watching the parade near the start of the parade’s route when a car came racing toward the route: ‘We just saw a red vehicle speeding down the road while the parade was going on,’ she told the NYPost.

‘We thought maybe it was an unmarked cop or something. All of a sudden we realized that wasn’t the case,’ she added. ‘People started screaming ‘move, move, move’ to get people out of the way.’

Corey Montiho, a Waukesha school district board member, told the Milwaukee Journal Sentinel that his daughter’s dance team was hit by the SUV.

‘They were pom-poms and shoes and spilled hot chocolate everywhere. I had to go from one crumpled body to the other to find my daughter,’ he said.

Angelito Tenorio, a West Allis alderman who is running for Wisconsin state treasurer, told the Milwaukee Journal Sentinel that he was watching the parade with his family when they saw the SUV come speeding into the area.

‘Then we heard a loud bang, and just deafening cries and screams from people who are struck by the vehicle,’ Tenorio said.

‘And then, and then we saw people running away or stopping crying, and there, there are people on the ground who looked like they’d been hit by the vehicle.’

Tenorio said he saw about 10 people, children and adults, on the ground who appeared to have been hit by the vehicle.

‘It just happened so fast,’ he said. ‘It was pretty horrifying.’ 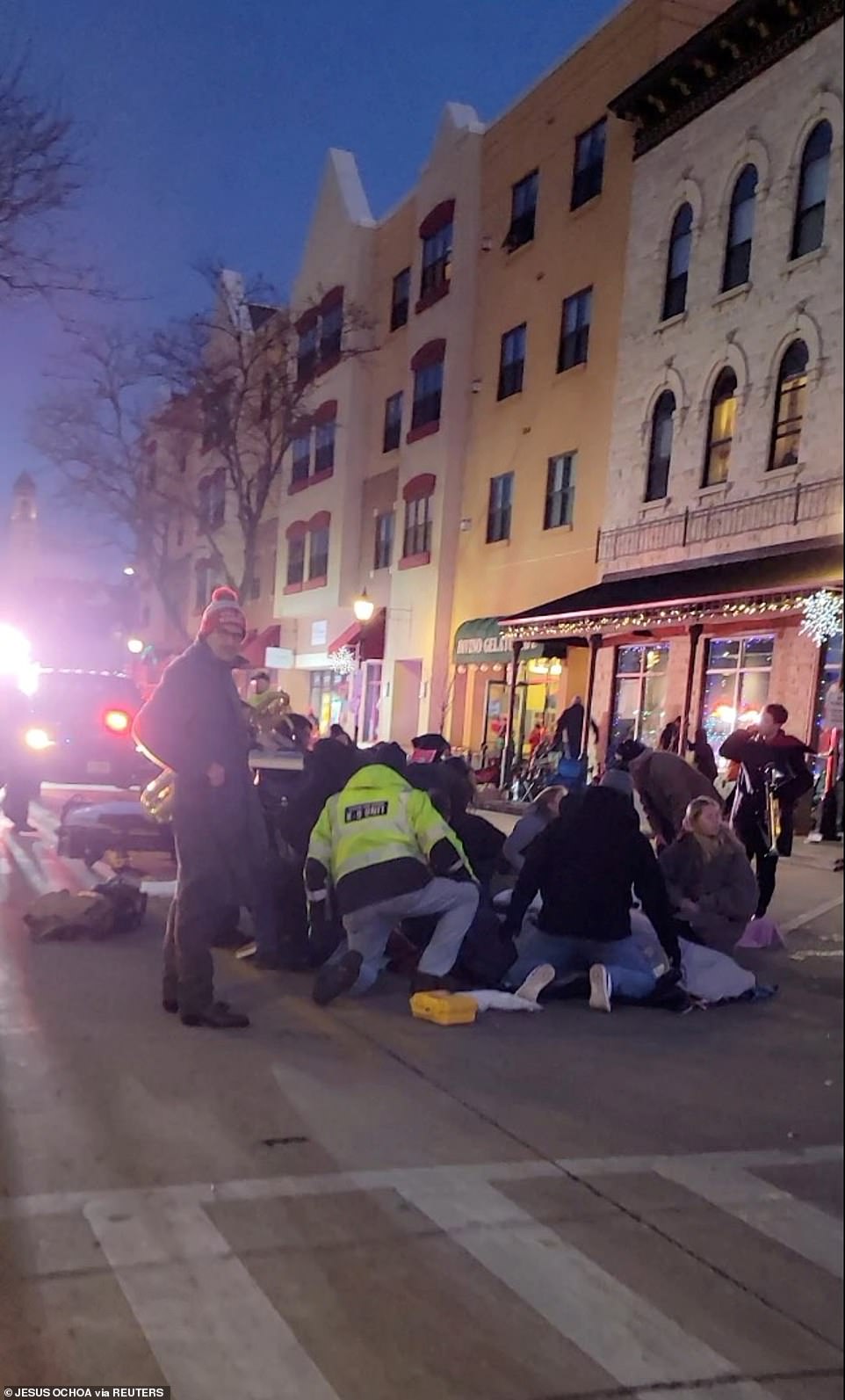 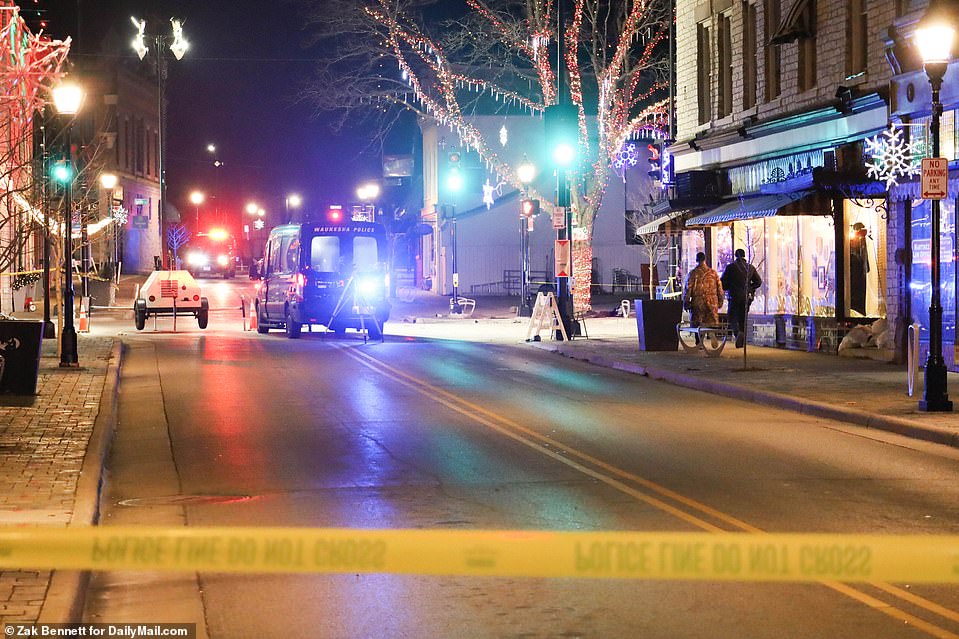 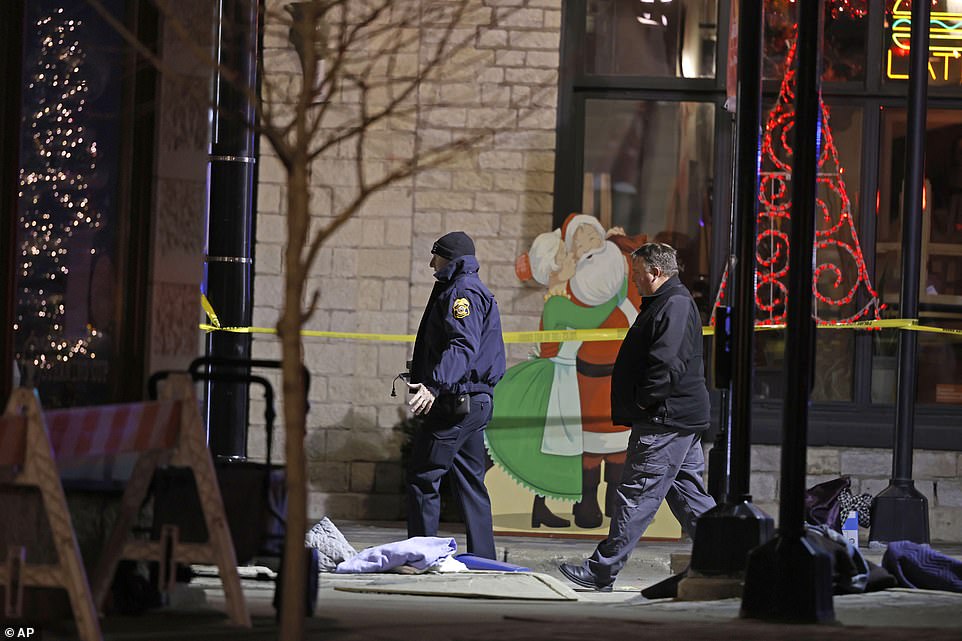 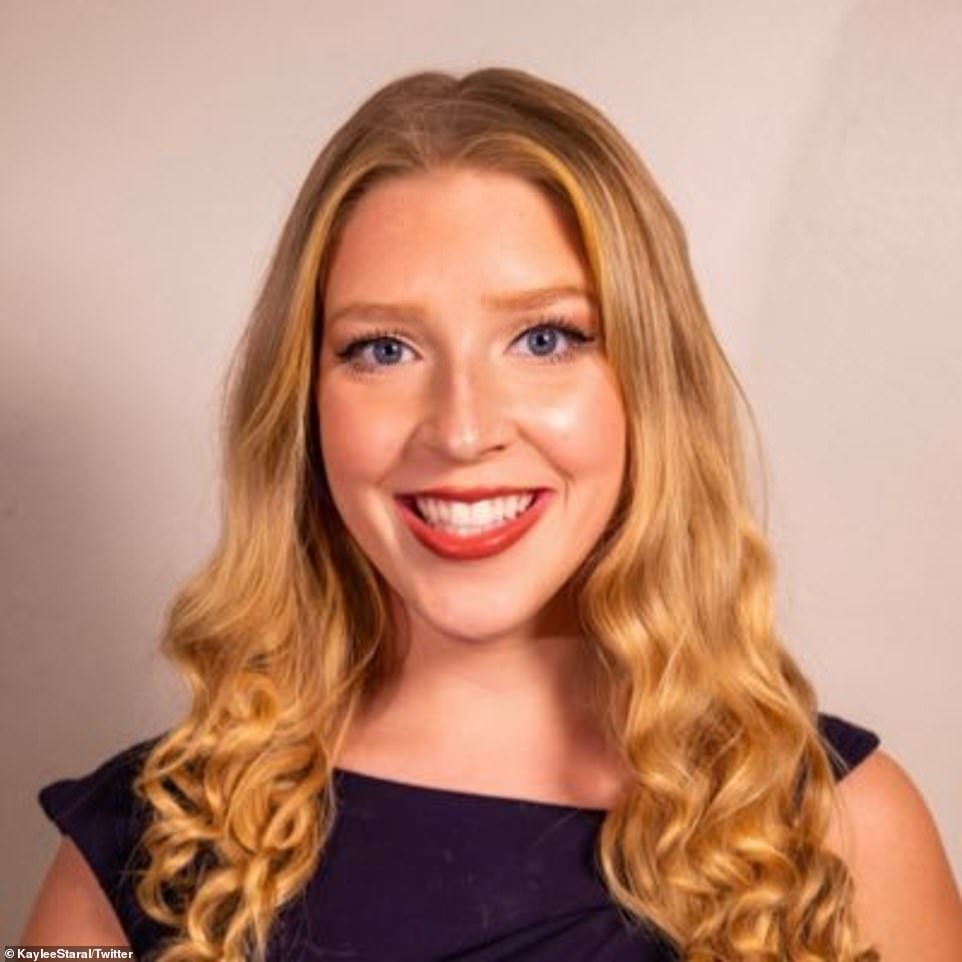 Kaylee Staral, an intern for the Milwaukee Journal Sentinel newspaper, heard ‘a lot of screams’ and saw ‘multiple people on the ground’ after the SUV ran through the crowd

‘There were lots of families, lots of small children there. A red SUV came running down the street, hitting a lot of people in the parade,’ Kaylee Staral, an eyewitness who was at the parade with her mother and stepfather, told CNN.

Staral told The New York Times that she and her family were standing at the curb outside a store when the red SUV sped through in the middle of the parade.

Staral, an intern for the Milwaukee Journal Sentinel newspaper, said the SUV plowed into the paradegoers between 20 and 30 minutes after the festivities began.

‘There were a lot of screams,’ Staral said. ‘We thought maybe it was Santa, but it was a red SUV and it hit a lot of people.’

Staral also said police reported that gunshots were fired, but ‘I cannot confirm that for you.’

She said that it wasn’t clear if the driver was heard saying anything since he was ‘going very fast’ and that there was ‘a lot of screaming.’

Staral said that while it is unclear if the driver was intentionally trying to mow down people, the car ‘was going very fast and it was in the middle of the parade.’

‘It’s not like they somehow missed that there was a parade happening,’ she said.

Staral said that the annual holiday parade was held for the first time in two years after last year’s parade was canceled due to the COVID-19 pandemic.

Video captured the terrifying moment a young girl was nearly hit by an SUV that barreled past her before running down a holiday parade killing several people in Wisconsin on Sunday.

A young girl dressed in all pink is seen dancing along to the music on the side of the street as the parade marches on behind her in a suburban of Milwaukee, Wisconsin.

A red SUV is then seen speeding down the road alongside the parade route missing the young girl by inches as the crowd screams and the parade slows to a halt.

The camera turns to record down the street following the direction of the red SUV which is already out of sight. A few people are seen running towards the scene.

The car continued down the parade route killing at least five people and leaving at least 40 people injured, among them several elderly women who were part of a ‘Dancing Grannies’ float and members of a schoolgirls’ dance team, according to reports.

Other footage from the deadly scene showed red SUV collide into a group of people marching in the middle of the street during the annual holiday parade in Waukesha, some 20 miles west of downtown Milwaukee.

The official social media account of the City of Waukesha indicates that the parade started at 4pm local time.

The parade was livestreamed on the city’s Facebook page.

At around 7:15pm local time, the Waukesha Police Department sent a push alert to cell phones of residents in the area asking them to shelter in place ‘within a half-mile radius of the 5 points downtown.’ 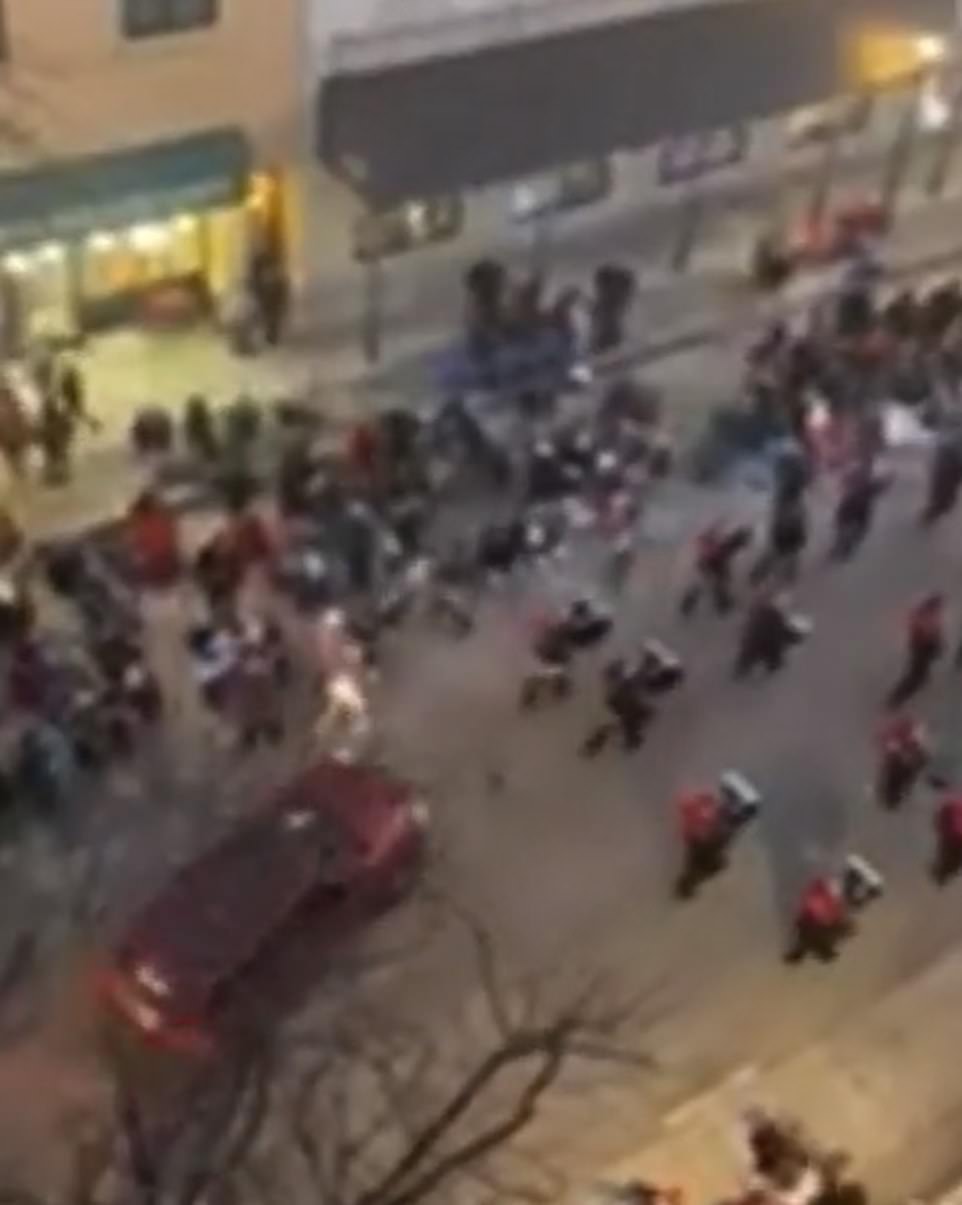 Terrifying video posted to social media shows a speeding red SUV collide into a group of people marching in the middle of the street during the annual holiday parade in Waukesha, some 20 miles west of downtown Milwaukee 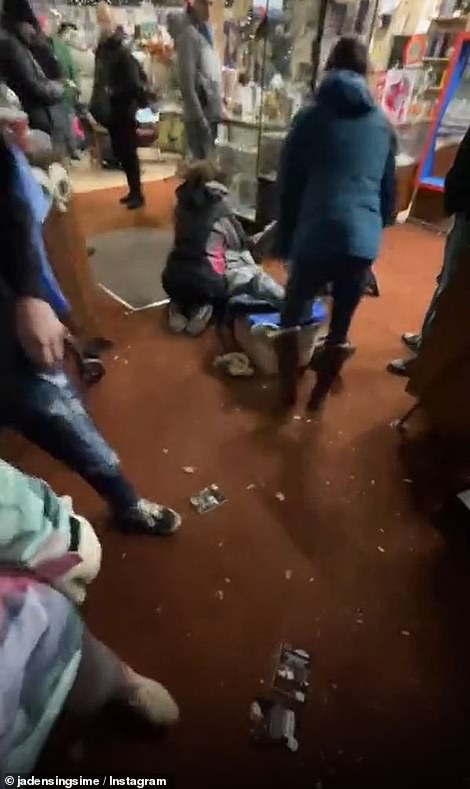 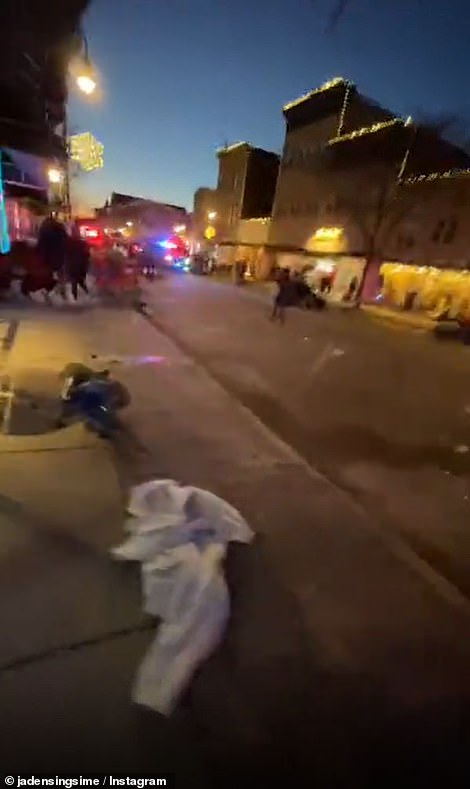 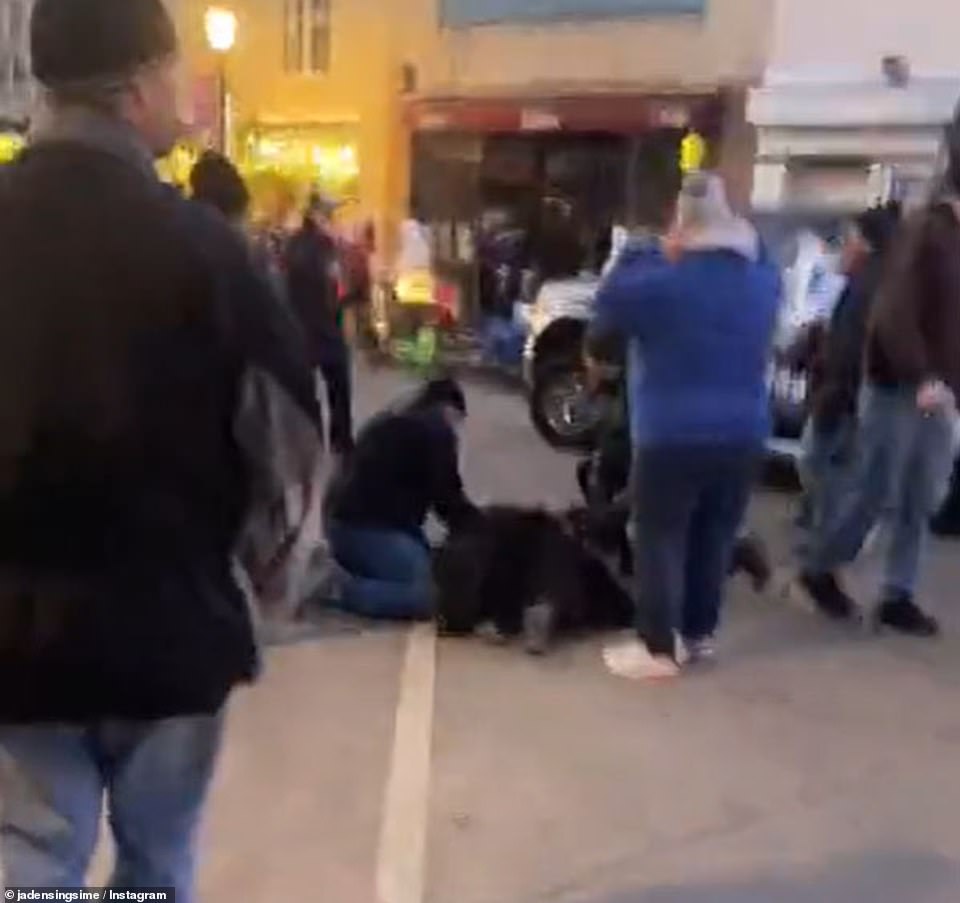 Locals tend to an injured paradegoer in Waukesha, Wisconsin on Sunday night after the horrific incident 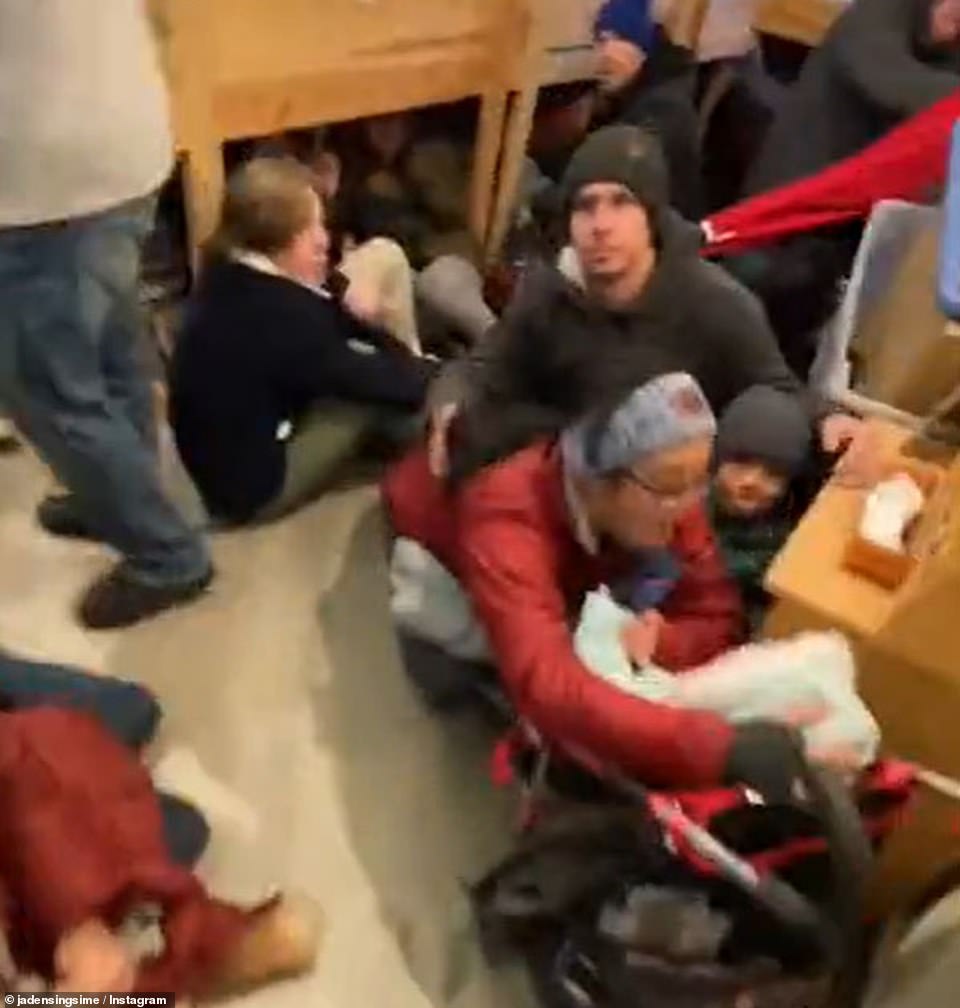 Law enforcement officials are urging locals to avoid the downtown Waukesha area as the investigation is ongoing. Police have also set up a family reunification location at Metro Transit Center near Bank Street.

Another witness tweeted: ‘Right in front of my family, this man drives through the parade hitting as many people as possible while shooting out the window.

‘He ran over several elderly women who were dancing in the parade and many others please pray for everyone in Waukesha.’

The witness added: ‘Waukesha has some of the nicest families and people in this country.

‘This parade is one of the most heartwarming events of the year, this is not the America my little cousins, parents, aunts, uncles, ANYBODY deserves.

Angela O’Boyle lives on the fifth floor of an apartment building that overlooks the parade route.

She told CNN that she was on her balcony watching the procession.

‘The next thing I heard were screams and turned my head and saw the car come and plow into the band that was just pass my balcony at that point,’ she said.

She added: ‘It hit at least two people right away and rolled over them.

‘And then continued down the road to People’s Park, which is at the end of the block – and then kept going, it didn’t stop.’

According to Boyle, people screamed and parents yelled out their children’s names.

‘It was not something that I wanted to see.’

A television news reporter for Fox6 TV tweeted photos from the scene.

‘There are bag chairs and handfuls of candy stranded all along Main Street. Another man told us he heard a handful of shots and ran for cover.

‘He was almost hit by the SUV as it pulled through.’

The Waukesha School District has cancelled classes for Monday.

‘The District will have additional counselors available at all buildings for all students and staff in need of support services,’ the school district website announced. 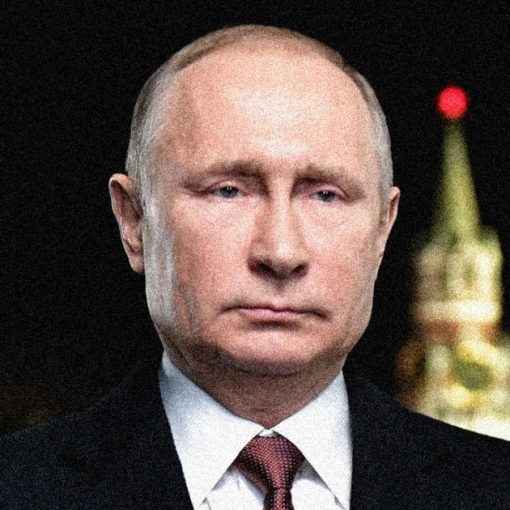 Even as Russia’s short-term designs for a “victory” in its invasion of Ukraine grow ever more modest amid its military failures, Russian […] 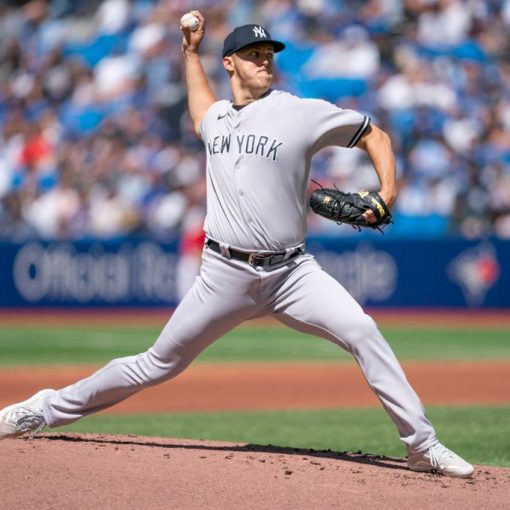 TORONTO — Jameson Taillon has made almost a third of his starts this season against the Blue Jays, who got their fourth […] 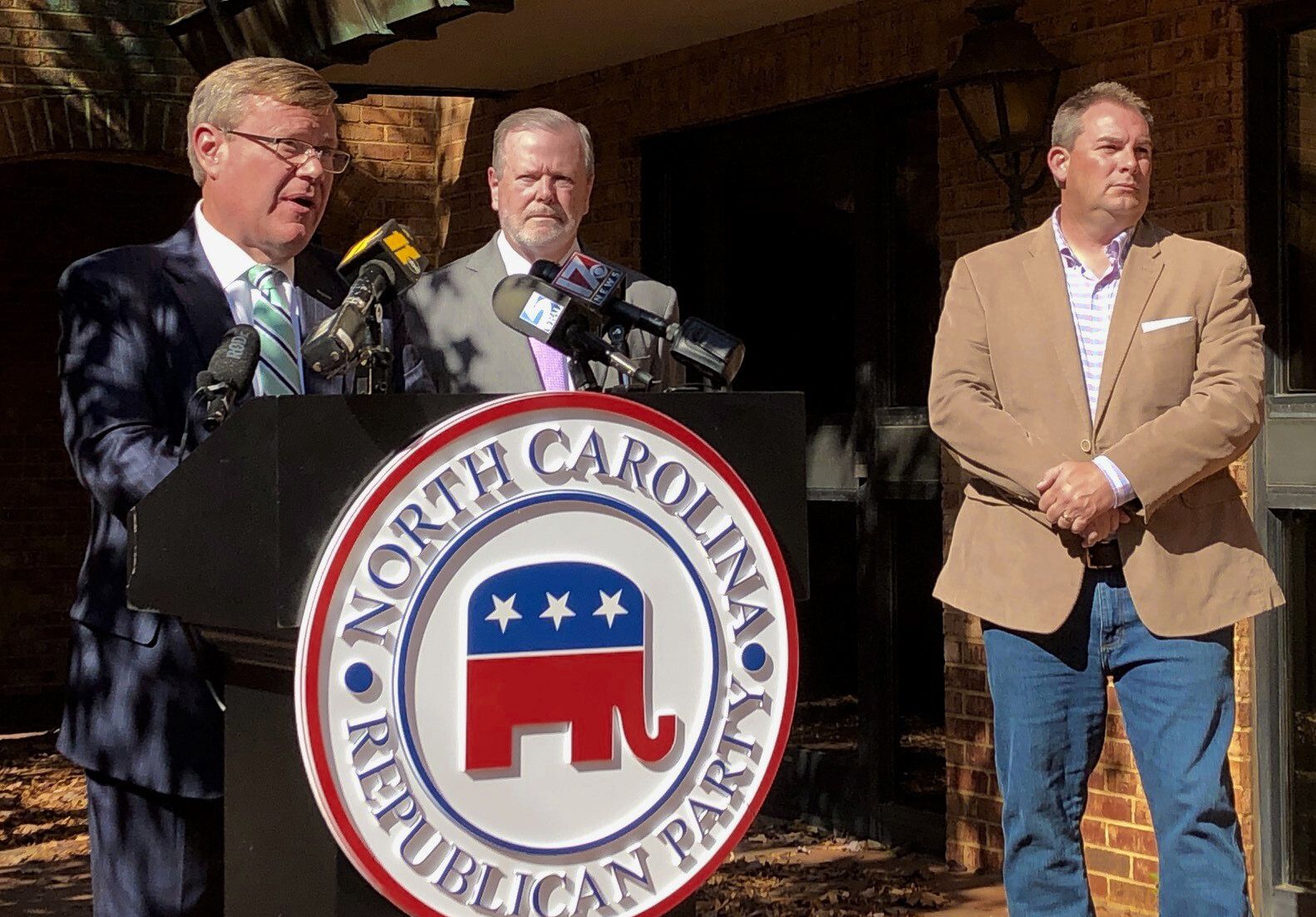 JEFFERSON CITY, Mo. (AP) — After a costly and intense political battle for control of state capitols, the composition of state legislatures […] 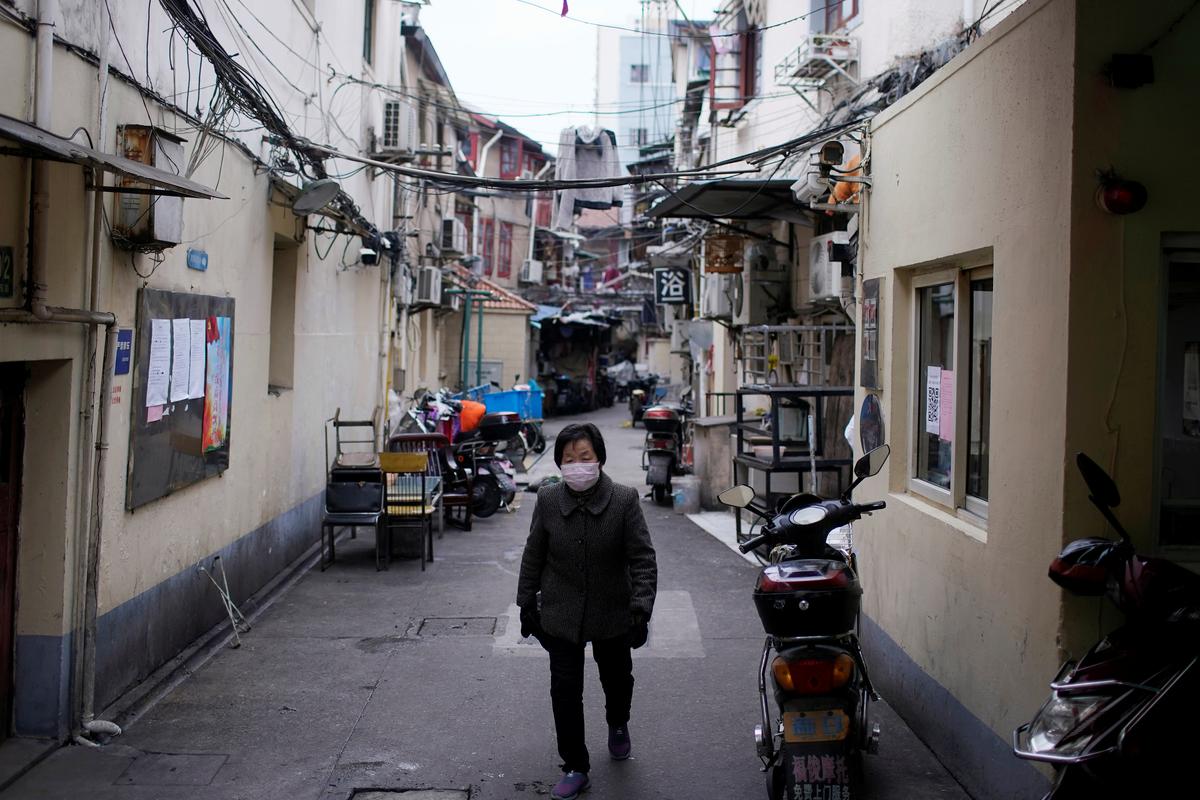