By Olivia Devereux-evans For Mailonline


A granddad has had both legs and some of his fingers amputated after being bitten by a dog, just weeks after the same animal attacked and killed his own brother-in-law.

Mark Day developed sepsis after the Japanese Akita called Ted bit him on the day of his brother-in-law’s funeral.

Barry Harris, 46, died from a cardiac arrest after Ted – described as a giant teddy bear when he was bought for £1,500 –  also bit him on the arm. The bite became badly infected, causing his heart to fail three days later.

Following Mr Harris’ death in July,  Pauline and Mark Day, sister and brother-in-law to Mr Harris, took in the dog and cared for it. 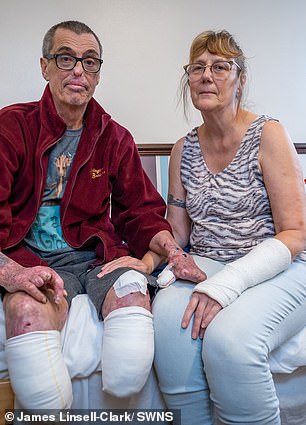 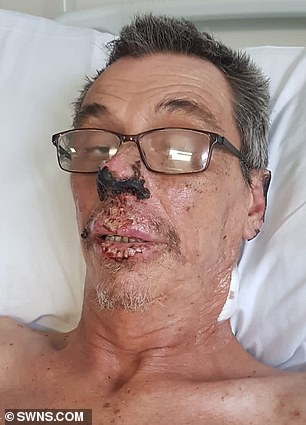 Pauline and Mark Day have spoken of their devastation after Mr Day has had both legs amputated from being bitten by Ted the Akita, after brother-in-law Barry Harris was killed by the same dog 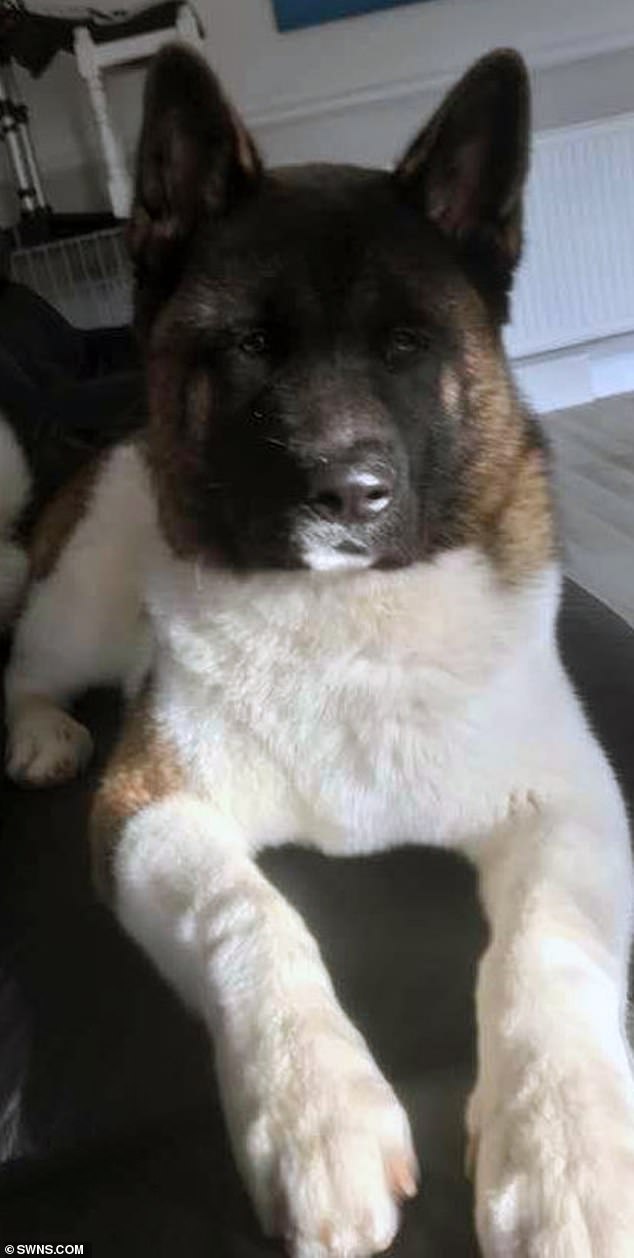 The bite caused sepsis and he has had both legs and the fingers on his left hand and two on his right amputated.

The husband and wife are devastated and said they did not know Ted’s mouth was bacteria-ridden.

Ted has been put down after doctors said he was responsible for the injuries. 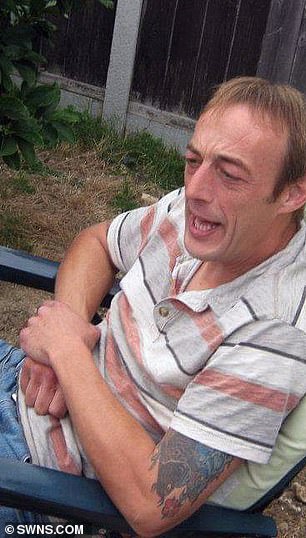 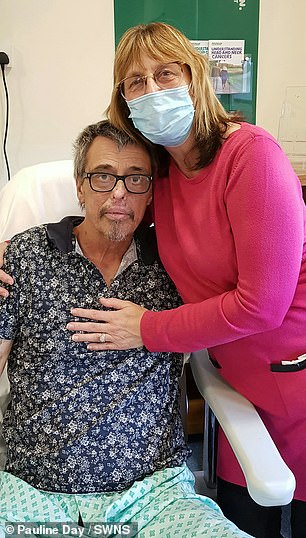 Mrs Day said:  ‘It’s like something out of a nightmare. You just don’t believe this has happened,’

‘The shock of my brother was one thing, and then my husband. It’s just surreal.’

The bite caused his temperature to soar and legs to feel like blocks of ice.

Organs failing, he was put in a 10-day coma to save his life and awoke to horrifying sights.

He said to the Mirror: ‘My feet were black almost a third of the way up.

‘I didn’t know whether it was going to keep coming up my body.’ 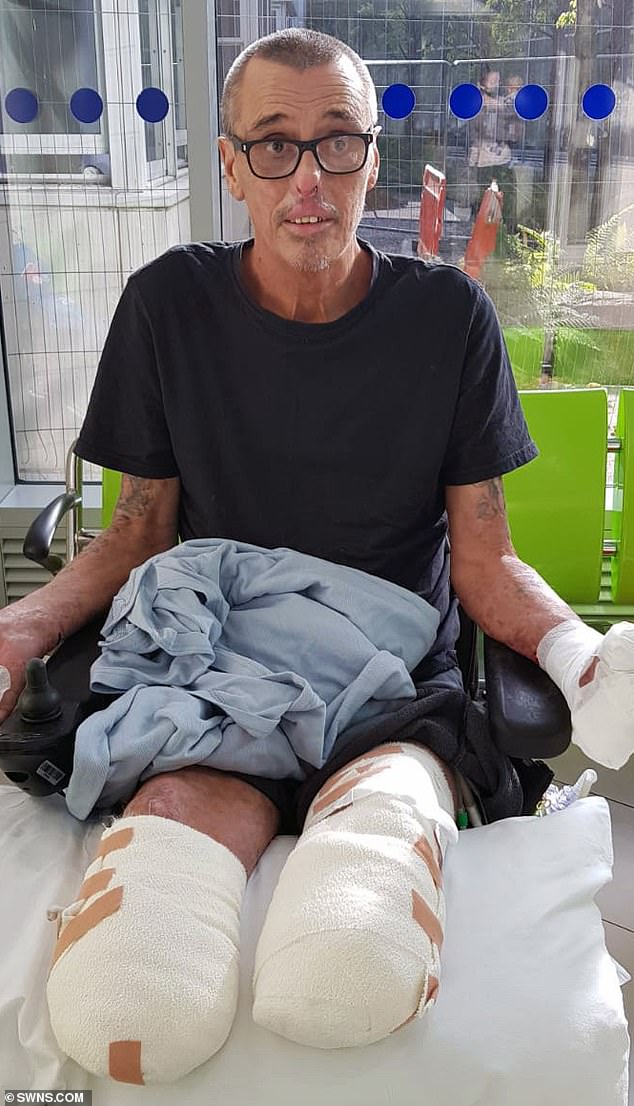 The husband and wife said they did not know Ted caused Mr Harris’ death until after Mr Day nearly died too.

Mrs Day said the dog had just ‘broken the skin’ on her husband and brother and was a soft dog but was aggressive around food.

The pair think Ted was mistreated as a puppy.

The dog was bought through Facebook and sold by a London seller seven weeks before Mr Harris died.

Mr Harris was bitten while trying to get a bone from the animal’s teeth.

He had cold sweats and headaches and died at home.

His brother-in-law Mr Day spent 82 days in hospital and has finally been discharged.

He is hoping to get prosthetic legs soon and said he is pragmatic despite his injuries.

Mr Day is looking forward to going walking with his granddaughter and fishing again.

He wants to get a puppy as well- but will make sure the vet treats it first. 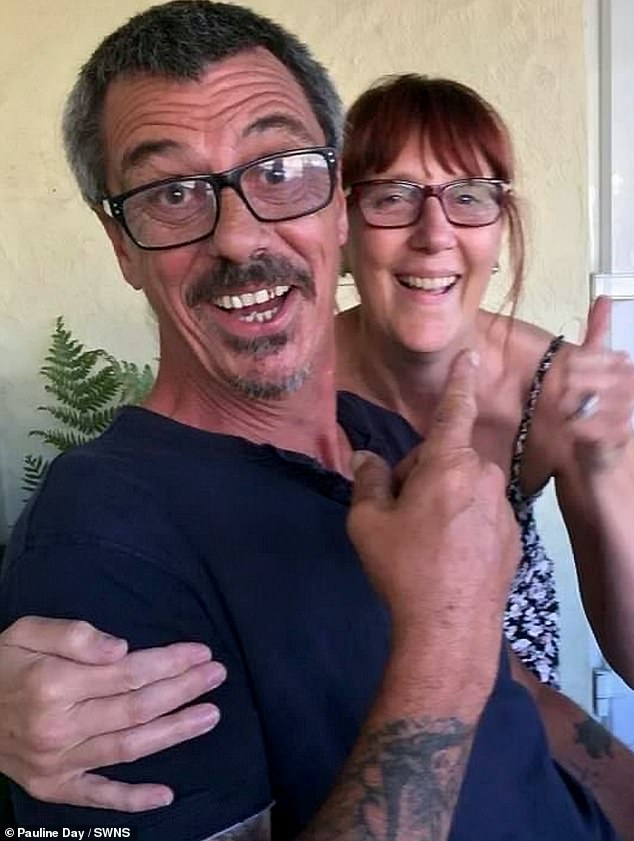 Pictured: Mr and Mrs Day, in happier times, who did not know the dog had caused the death of Mr Harris 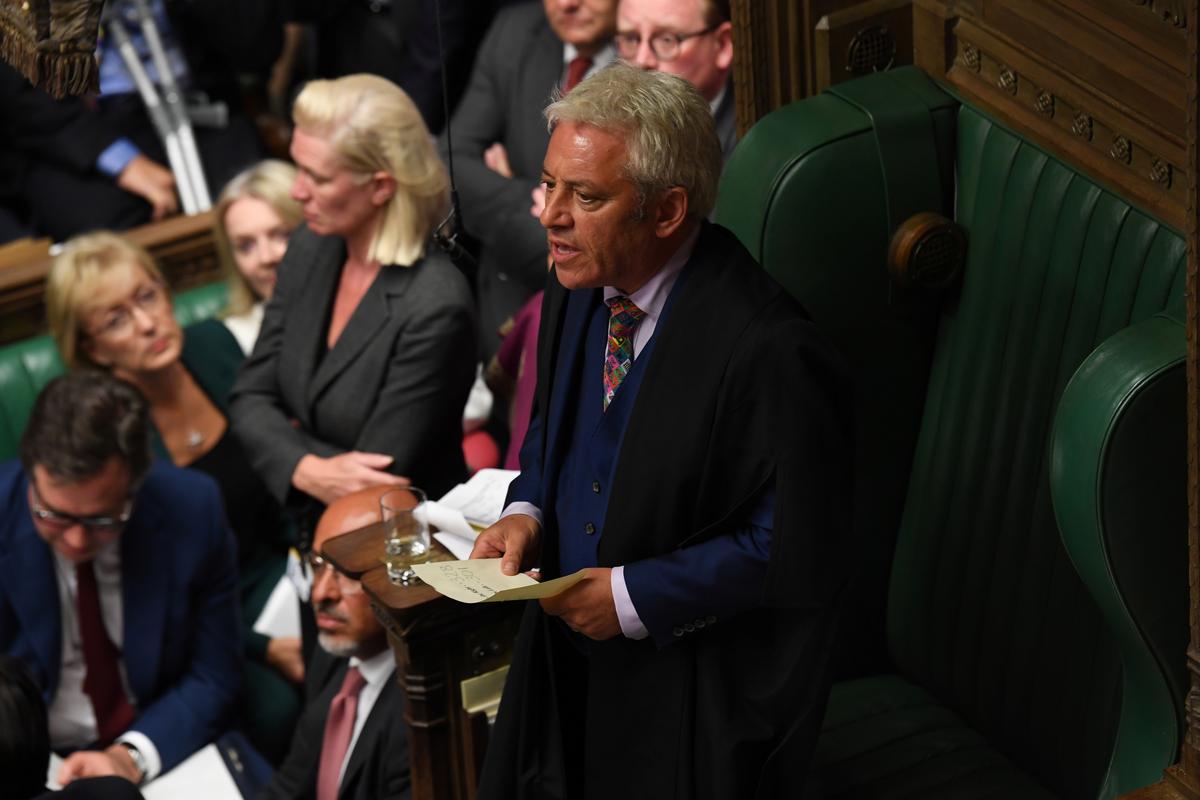 FILE PHOTO – Speaker of the House John Bercow speaks in the House of Commons in London, Britain September 3, 2019. ©UK […] 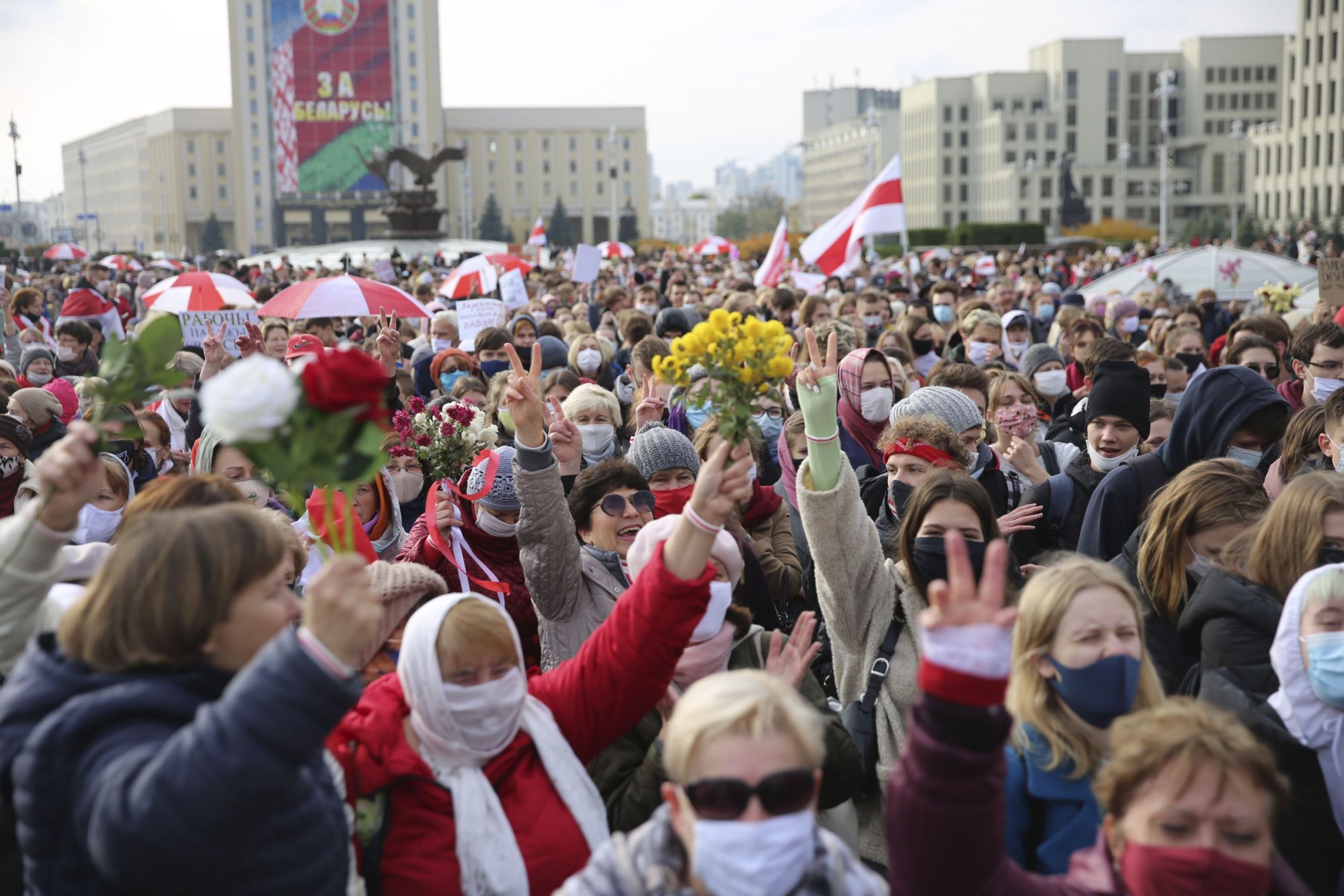 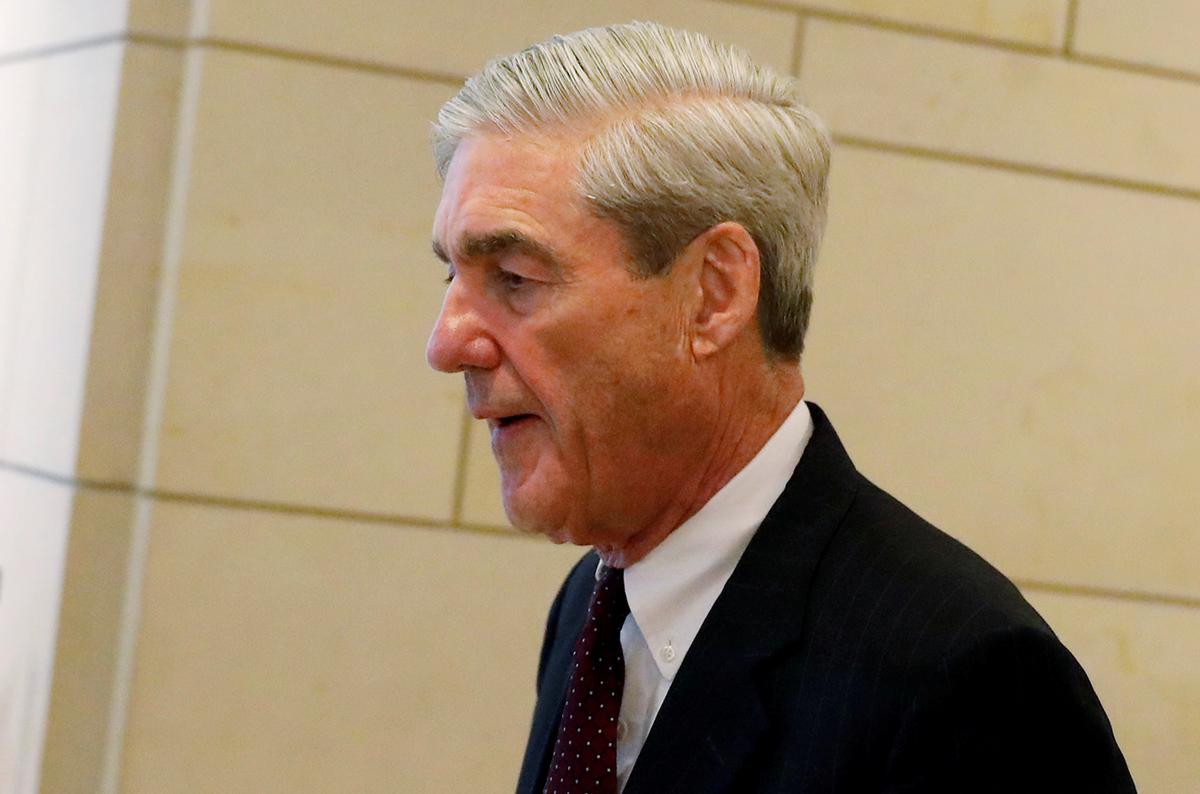 WASHINGTON (Reuters) – Special Counsel Robert Mueller’s investigation into Russian interference in the 2016 U.S. election has ended, but the grand jury […]