What’s going on in the little island of Canouan must be bewildering to the resident tortoises as they enjoy their ritual saunter at sunset.

Come to think of it, the 1,800 year-round human inhabitants of this tiny Caribbean cracker must also be scratching their heads at what they are witnessing.

Not so long ago, there was no proper water supply, no secondary school, no hotel, no golf course, no possible inkling of a glitzy marina — and the very idea of an airstrip big enough to cater for Boeing 737s was preposterous. 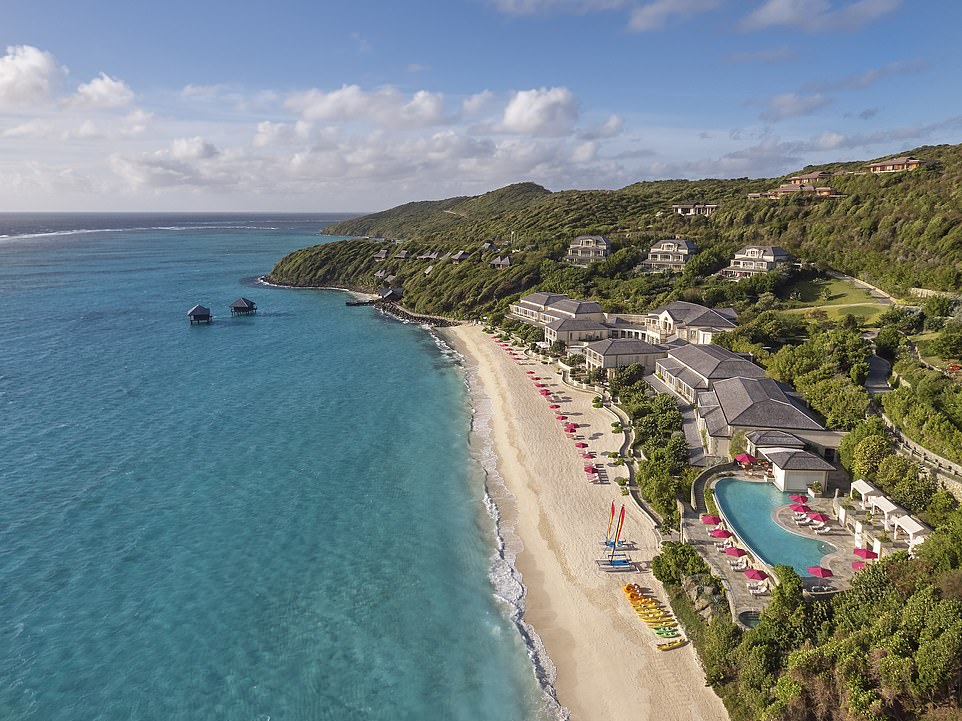 Pictured is the beach at Mandarin Oriental, which the Daily Mail’s Mark Palmer says is in ‘one of the most beautiful settings in the world’ 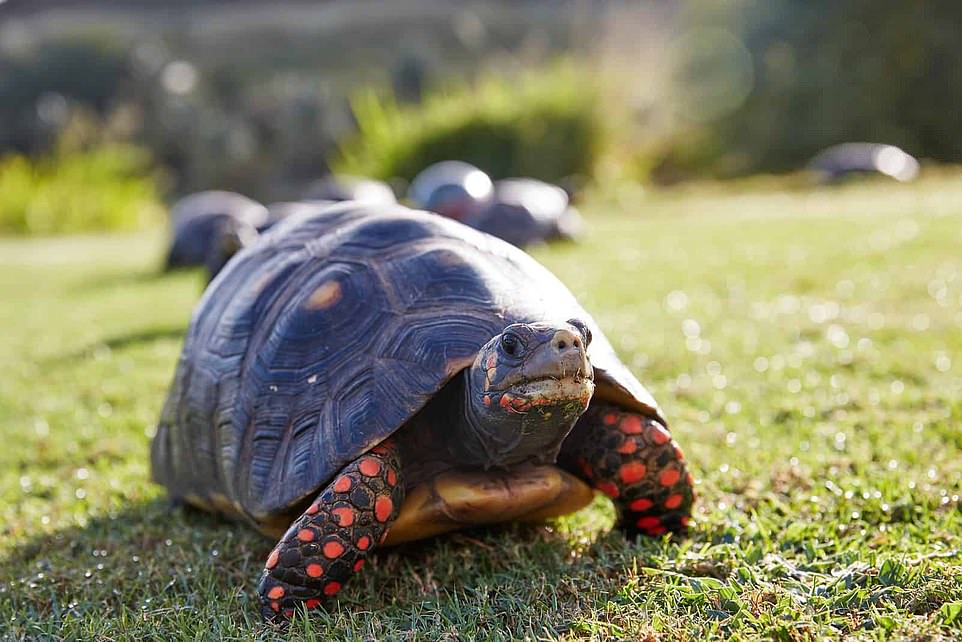 Island sights: Keep an eye out for the tortoises on Canouan – the slow-moving animals outnumber residents

Now? Well, the tortoises may still outnumber the residents but Canouan (pronounced ‘ka-no-wan’) is being talked up as the ‘new Mustique’ or, crudely, the ‘island where billionaires get away from millionaires’.

Thank goodness, there is far more to it than that. There are glorious beaches, a few ramshackle shops and bars, the longest coral reef in the Caribbean, towering Mount Royal (the top of which has views of almost all the islands that make up St Vincent and the Grenadines, including moneybags Mustique), a multitude of turtles and tropical fish, exquisite hummingbirds and charming people who seem happy to go along with the ride.

The ride is one powered by money — and vision. At one end of the island, which is a mere three-and-a-half miles long and a mile-and-a-quarter wide, is the 1,200-acre private Grenadine Estate owned by Andrea Pignataro, an Italian former bond trader who founded the software company ION Trading. This is where the Mandarin Oriental sits on a sublime stretch of sand overlooking a huge bay and the reef beyond. 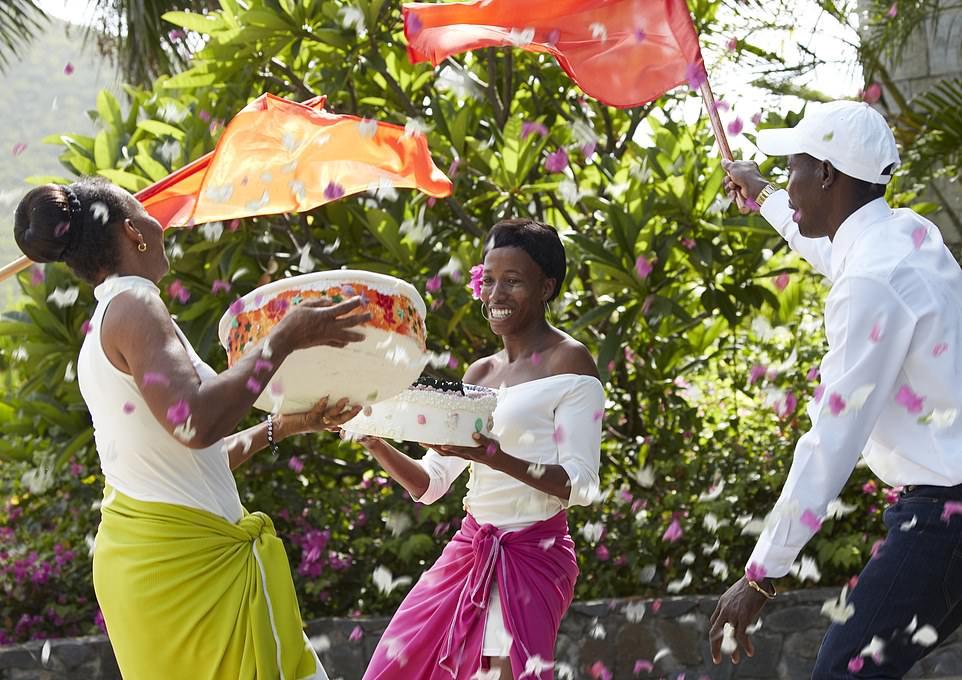 Mark says the island is home to ‘charming people’, who are okay with the fact the island is changing. Pictured are some friendly locals

Our room, with its expansive balcony, presides over all this. Elsewhere on the estate, individual villas have been built to an exceptional standard, selling for millions or rented out for thousands of pounds a week.

Nearby is a charming Anglican church, which looks as if it has been transported from Blighty stone by stone — which in fact it was in the 1800s.

At the other end of the island is Dermot Desmond, the Irish billionaire and co-owner of the glitzy Sandy Lane Hotel in Barbados, who has built a 120-berth, $250 million marina on Canouan’s west coast, plus a quaint-looking village modelled on Portofino in Italy.

Desmond was a partner in the original Grenadine Estate, which explains why the Mandarin is, somewhat unfortunately, a dead ringer for Sandy Lane, albeit with superb service and one of the most beautiful settings in the world.

Between these two mega-bucks creations is the original sleepy village, where Canouans are waking up to the idea that their island is at an extraordinary crossroads — and living in hope that trickle-down economics proves a boon.

Oh, and just to add to the mix, looking down from a lush green height is the Trump Casino, a reminder of Canouan’s recent chequered history when The Donald briefly threw some money at the place, including the establishment of an 18-hole Jim Fazio-designed golf course. The course is still there but the casino is locked up — a slight embarrassment. 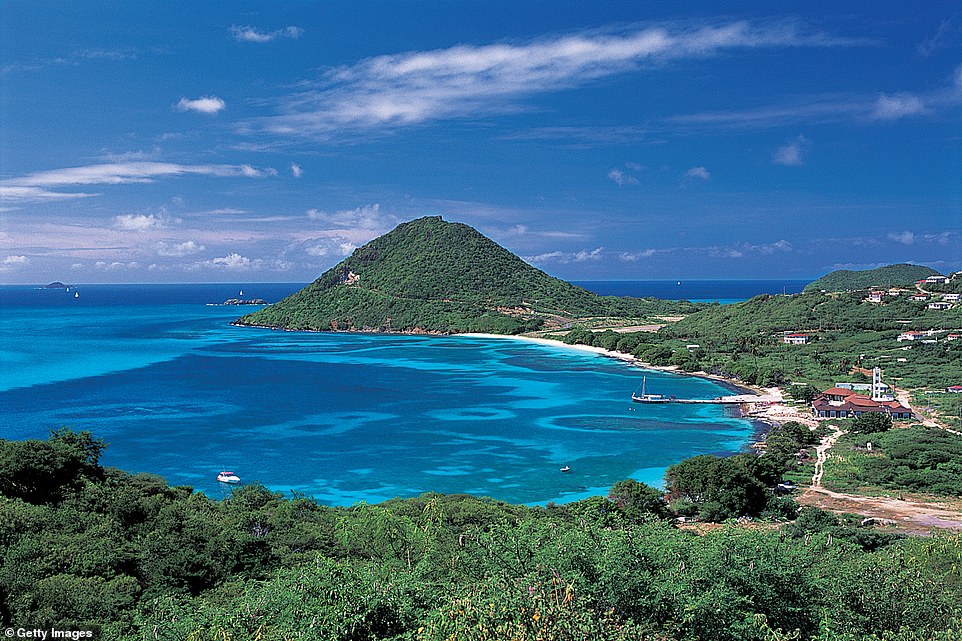 Towering Mount Royal, pictured, has views of almost all the islands that make up St Vincent and the Grenadines The above map shows Canouan’s proximity to Mustique, as well as some of the spots Mark visited during his stay on the island

Just 24 miles long, Bonaire is an arid, low-lying Dutch island north of Venezuela, fringed with 89 diving sites. Many can be reached from the shore.

GETTING THERE: KLM has flights via Amsterdam and Hotel Islander Bonaire is a friendly base in the capital, Kralendijk, from £66 (hotelislanderbonaire.com, tourismbonaire.com).

Visit the green, mountainous island of Montserrat and you will get a shamrock stamped in your passport, a symbol of its links with Ireland that date back to the 1630s. The British Overseas Territory lies 27 miles south-west of Antigua and is super-friendly.

DON’T MISS: When conditions allow, you can visit Soufrière Hills volcano on foot, from the sea and or by helicopter.

GETTING THERE: A flight from Antigua. The Tropical Mansion Suites come with a pool from £123 (tropicalmansion.com, visitmontserrat.com).

Grenada’s smaller sister isle, Carriacou, lies 18 miles to the northeast. It has no big resorts and tranquil beaches.

DON’T MISS: The Carriacou Regatta, on the first weekend in August.

GETTING THERE: Catch a short flight or 90-minute ferry from Grenada. The boutique Mermaid Beach Hotel is in the heart of the capital, Hillsborough, from £89 B&B (mermaidhotelcarriacou.com, puregrenada.com).

DON’T MISS: The trans-island Impossible Highway is a magnificent drive.

GETTING THERE: KLM flies to St Maarten via Amsterdam, then take a ferry or short flight. Delightful white wooden cottages are from £185 B&B through Juliana’s Hotel (julianashotelsaba.com, sabatourism.com).

No one mentions Trump. His name is not in keeping with the new vibe. That new vibe is epitomised by the opening of Soho House’s first Caribbean venture following the takeover of Tamarind Beach Hotel, and with the yet-to-be built Aman hotel on the eastern side of the island.

The Soho House venture is open to members and ‘friends’ (the latter need to pay £100 a year, which allows them to book rooms).

It sits on Grand Bay, within easy walking distance of the village, and has been tastefully renovated, with blue tin roofs and a series of open palapas.

The Aman project sounds less certain, with a spokesperson saying ‘nothing has been announced’. But everyone on the island talks about its exact location, including the young man from the Mandarin who escorts me to the top of Mount Royal, where he insists on taking a photo of me perilously close to a certain-death drop.

‘The island is changing, which is fine by me,’ he says. ‘The mainland will be taking us more seriously in the future.’

The mainland is the island of St Vincent, which is positively bustling compared with Canouan. The mind boggles at the wheeler-dealings going on behind the scenes as the likes of Pignataro and Desmond go about their business. There is an almost Local Hero element to it, with a calypso rather than Dire Straits soundtrack.

‘Without Mr Pignataro the secondary school would never have been built and our children would still be living on the mainland during term-time,’ a local tells me at a bar called Seagrapes.

Canouan was originally occupied by Amerindians travelling north from the South American mainland. Its name is derived from the Arawakan word cannoun, meaning turtle.

In the 1700s, French settlers brought West African slaves to work on sugar plantations. The island then came under British ownership before finally gaining its independence along with the rest of St Vincent and the Grenadines in 1979.

One day, we go for lunch at Shell Beach on the other side of the bay, where the Mandarin has a restaurant, and there is only one other couple there.

Then we hear of Phil Jones, a British yachtie who has been living on the island with his wife since 1992. He runs day trips to the Tobago Cays Marine Park, an hour’s sail away, where Pirates Of The Caribbean was filmed.

Originally a Londoner, Phil has two boats — one a 48 ft catamaran called Splendid Adventurer, the other a 42 ft powerboat called, appropriately, Living The Dream. We climb aboard Splendid Adventurer and Phil introduces us to his two strapping young crew, both of whom were born on Canouan. They move about the yacht with dazzling speed and balance.

Traditionally, if I put my head underwater I end up with an ear infection and have to crawl to a doctor for antibiotics — but the water around the marine park is so inviting that I’m over the side and conversing with turtles and starfish practically before Phil has dropped anchor. And, of course, I don’t get an ear infection.

On the way back, the wind picks up and Phil comes into his own, plotting a course that gives us just enough of a soaking to make us feel as if we’re competing in the America’s Cup.

It has been a stupendous day, finishing up with dinner at a Mandarin offshoot on the beach called L’ Ance Guyac, where my wife and I congratulate each other on discovering Canouan.

All it lacks are some places to stay that won’t break the bank. That should come — or perhaps not, if Canouan really is the new Mustique.

Seven nights at the Mandarin Oriental Canouan in a One Bedroom Oceanview Suite from £5,575 pp B&B including flights to Barbados, inter-island flights to Canouan and UK lounge passes (0124 489 7294, elegantresorts.co.uk). Book by December 14 for travel between January 10 and February 28. 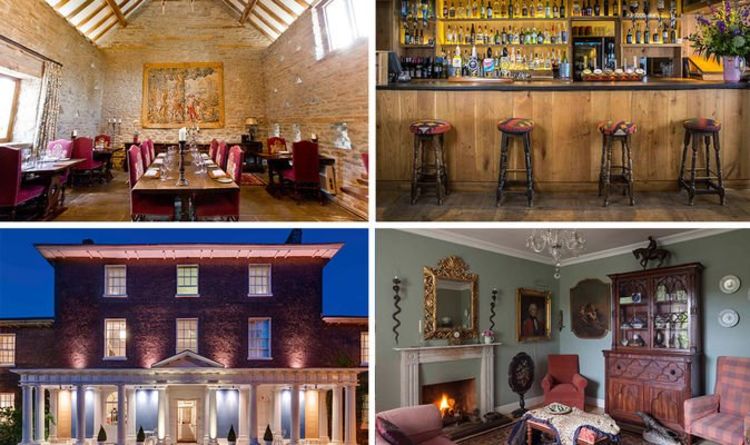 The UK is home to an array of unique hotels offering special stays for all kinds of guests and their needs. The […] 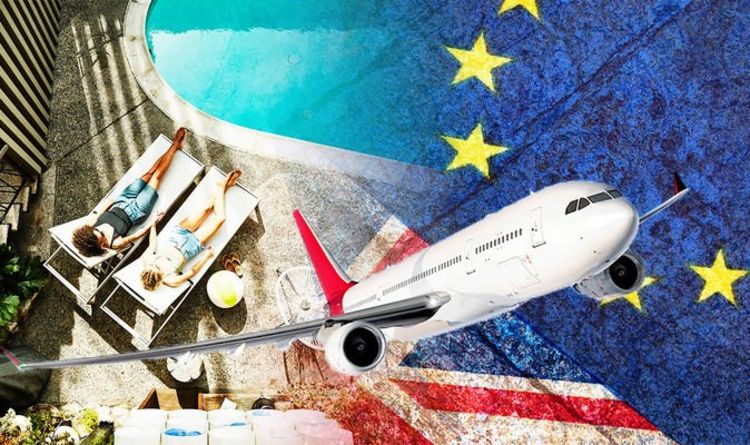 “Undoubtedly, there may be people who are worried about the impact of Brexit on their holidays as 35 percent of Brits have […] 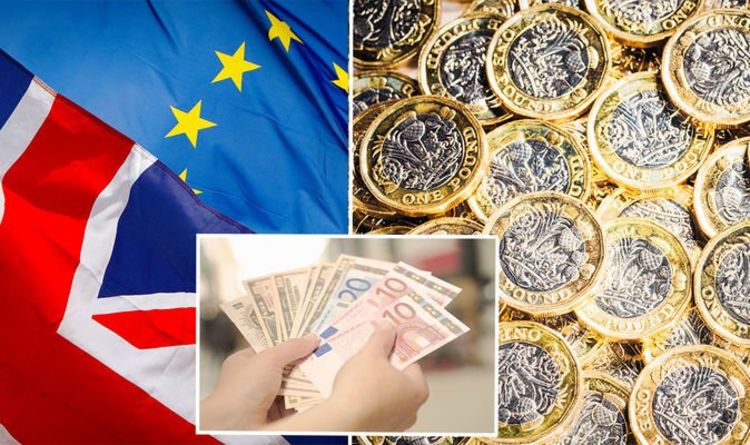 Brexit has caused fluctuations for the pound to euro exchange rate, with currency experts admitting Britons have “significantly lower” buying power. Yet […]