Covid vaccines appear to work just as well against the more transmissible Delta variant offshoot as they do on its ancestor, health chiefs claimed today.

A report by the UK Health Security Agency (UKHSA), which replaced the now-defunct Public Health England (PHE), showed jabs are around 81 per cent effective at stopping people infected with AY.4.2 getting symptoms.

For comparison, two doses are thought to block around 83 per cent of all people falling ill with the original strain.

The UKHSA said the preliminary results do ‘not suggest a significant reduction in vaccine effectiveness for AY.4.2 compared to Delta’ and admitted the slight drop may be down to chance.

Almost 24,000 cases of the strain have now been spotted in Britain. But the true count could be 10 times higher because laboratories are only sequencing a fraction of all confirmed samples.

Separate surveillance data shows the variant has now been found in all but a dozen parts of England and makes up one in ten new cases — with its proportion having doubled in the space of a month.

Despite statistics showing it’s still outcompeting its ancestor, some experts are now questioning how much more transmissible than Delta the subtype really is. Scientists initially estimated the strain was around 10 to 15 per cent more infectious.

Figures show while cases of the mutant strain are continuing to increase, its curve is flattening off. It is increasing slower than its predecessor did at this point after it was first sequenced. 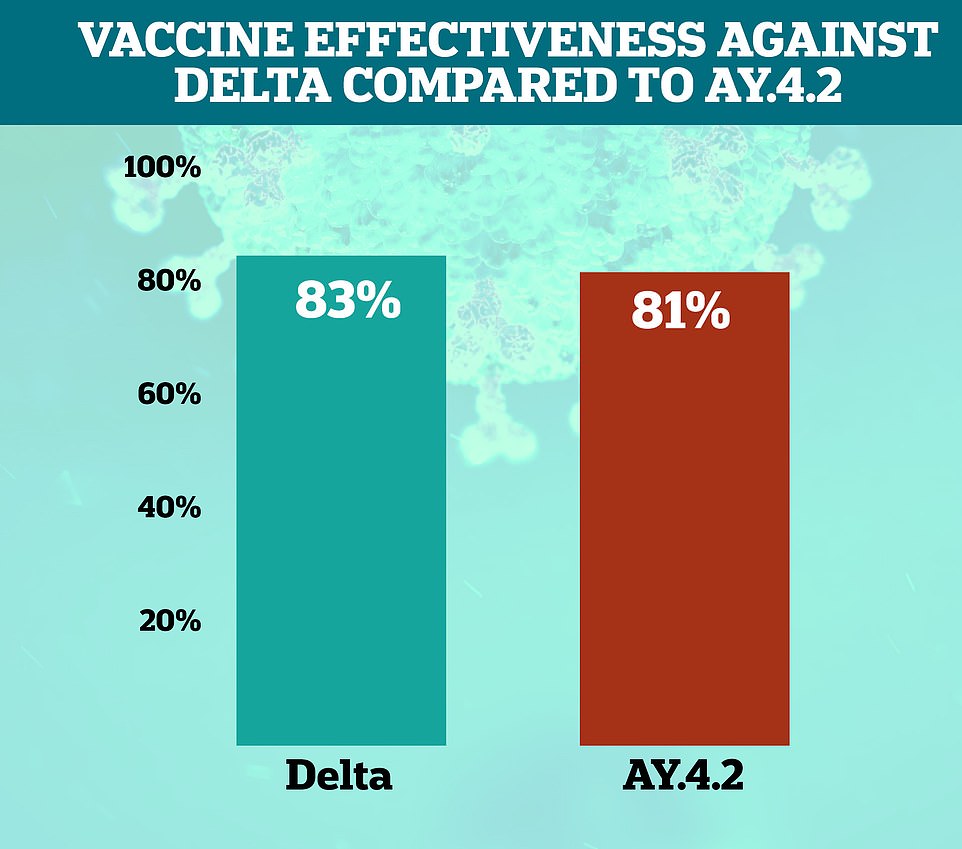 A report by the UK Health Security Agency (UKHSA), which replaced the now-defunct Public Health England (PHE), showed jabs are around 81 per cent effective at stopping people infected with AY.4.2 getting symptoms. For comparison, two doses are thought to block around 83 per cent of all people falling ill with the original strain 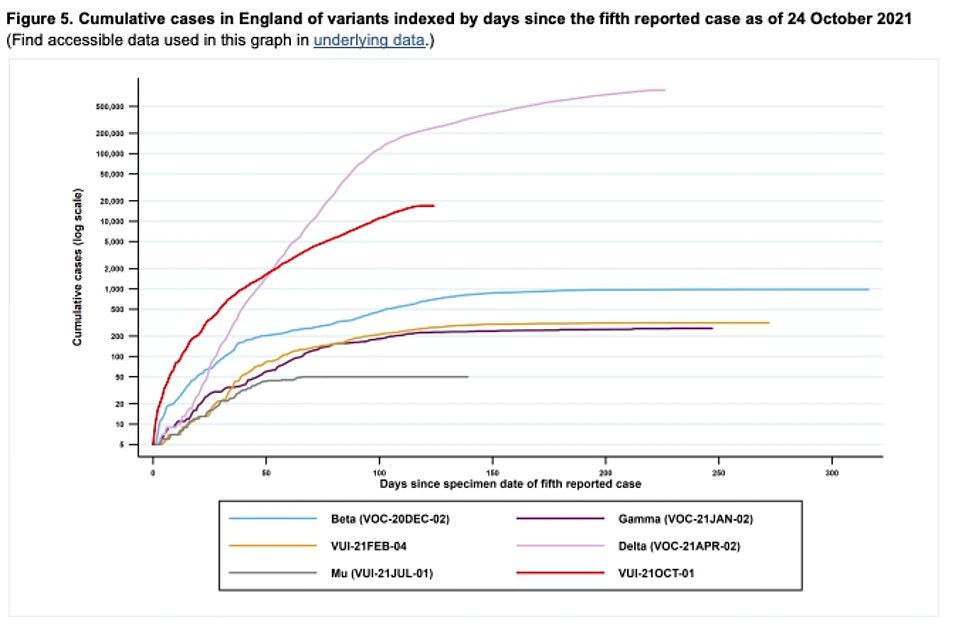 Covid vaccines appear to be just as effective against the more transmissible Delta offshoot, early tests today showed. Graph shows: The cumulative cases for each Covid variant since the fifth case was reported including Delta (lilac) and AY.4.2 (red). While cases of the mutant strain are continuing to increase, its curve is flattening off. It is increasing more slowly than its predecessor did at this point after it was first sequenced 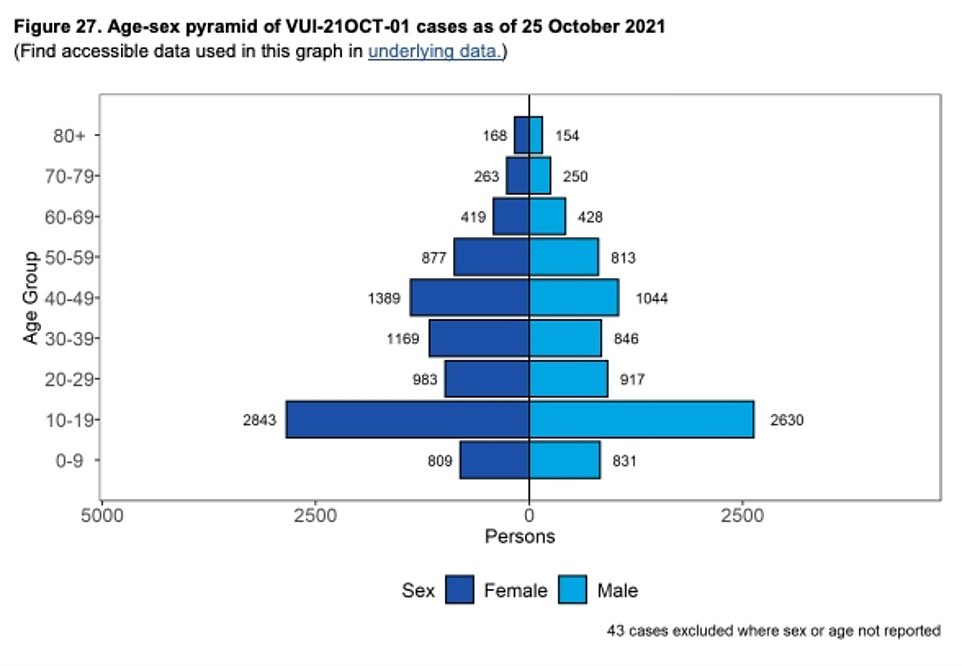 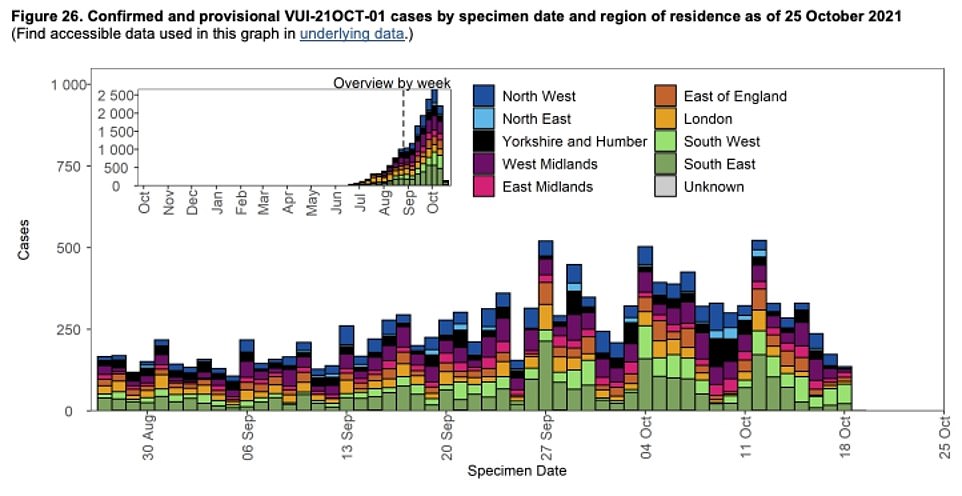 Regionally, the South West had the highest number of AY.4.2 cases in the week ending October 18 — reflecting overall infection numbers — with 426 sequenced during the week 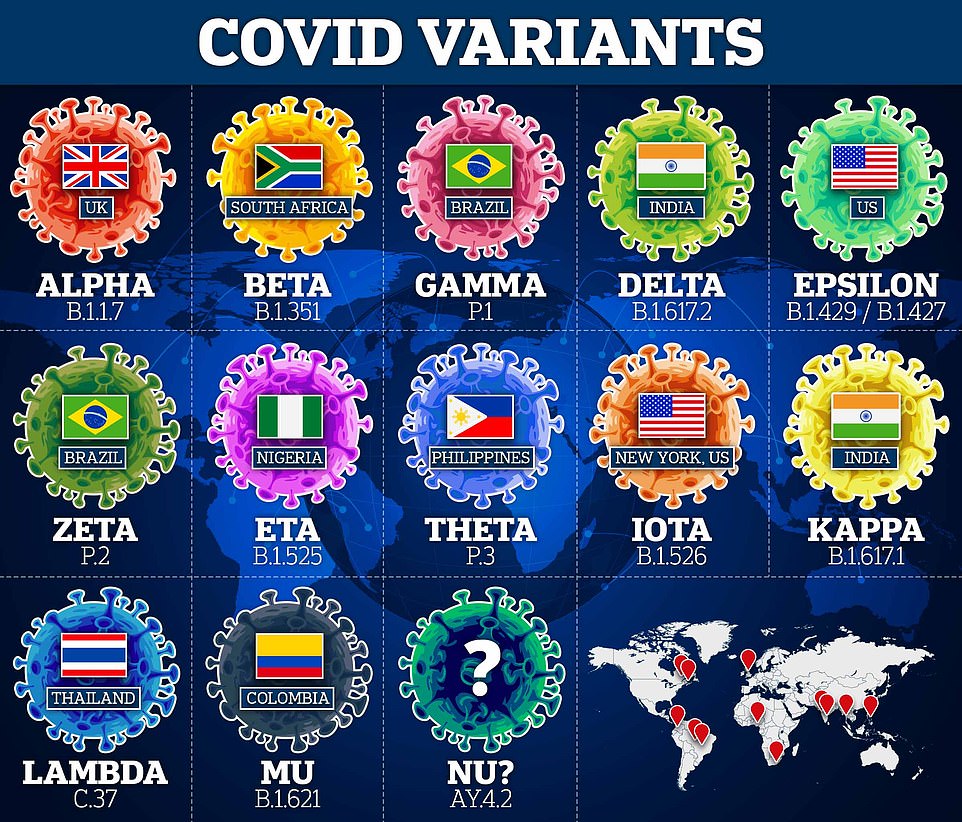 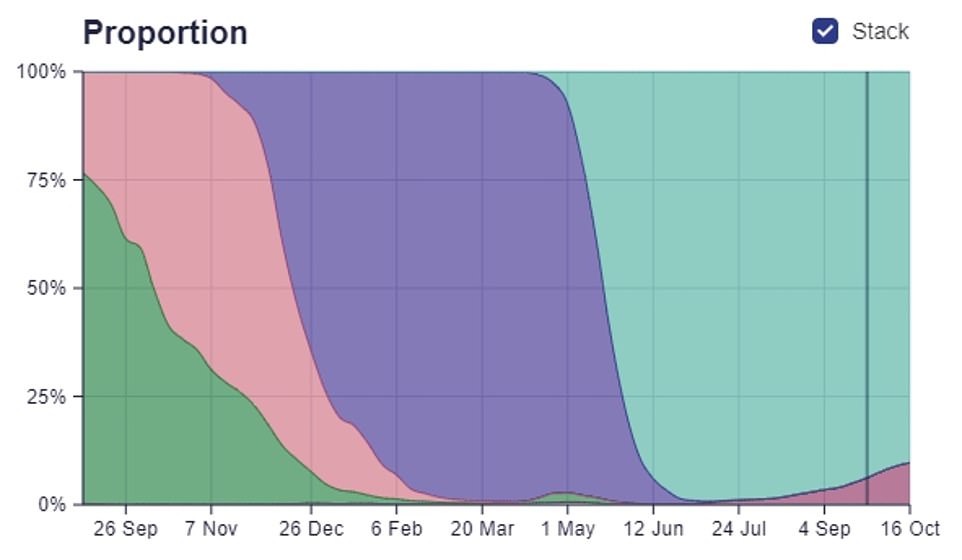 The above chart showed AY.4.2 accounted for a slightly higher proportion of cases in the latest week — one in ten — compared to two weeks ago — one in 13. Scientists said the slow rise was still compatible with a 10 per cent transmission advantage over Delta 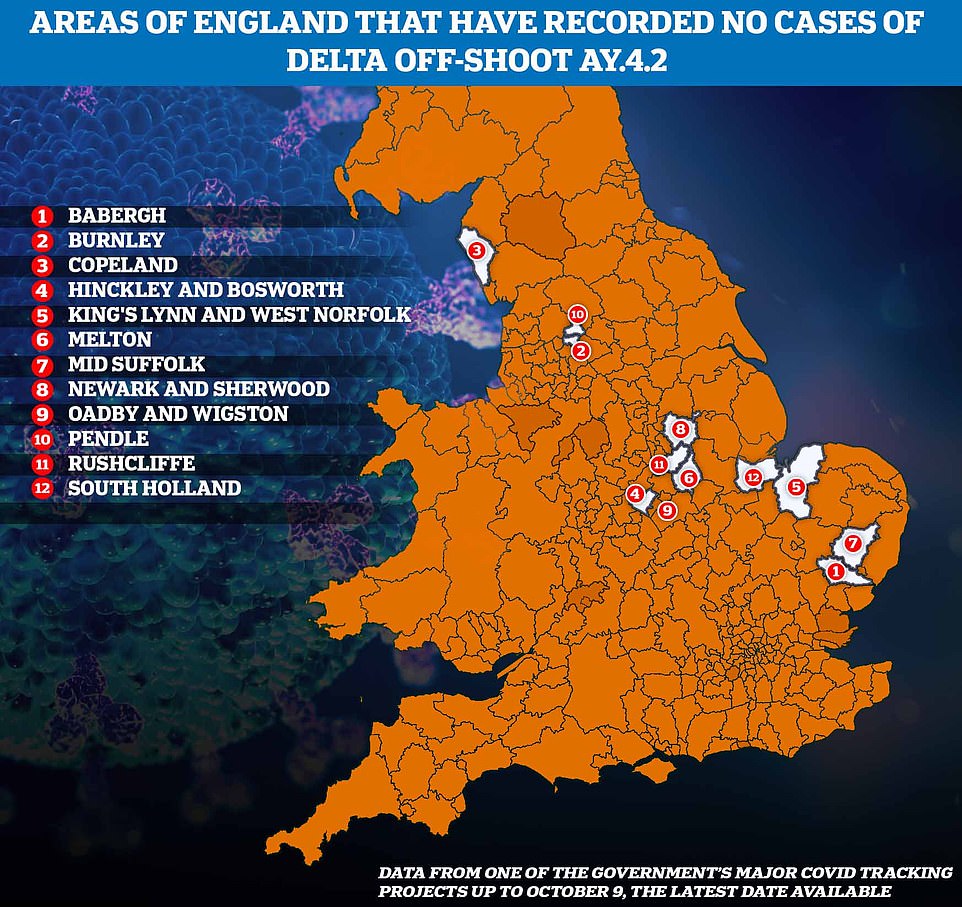 The above map shows the 12 areas AY.4.2 was not detected in (white) over the two weeks to October 16, the latest available. It has spread to almost every area of England 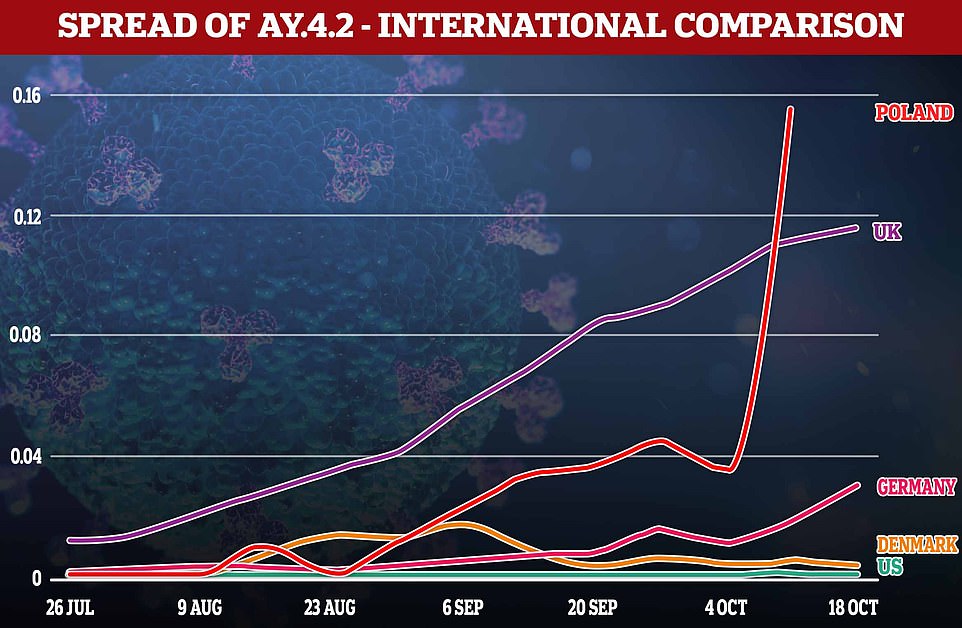 The new Covid variant AY.4.2 has been found in 42 countries, but has been most prevalent in the UK, US, Denmark, Poland and Germany. This graph shows the percentage of AY.4.2 cases as a proportion of the country’s total Covid cases. The UK has led case growth since the variant was fist identified in July, but in recent weeks Poland has eclipsed this, and there are signs Germany is also catching up

AY.4.2: Everything you need to know

This sub-variant of Delta was first detected in the UK on June 26, according to UK-based tracking.

Scientists say it is likely that AY.4.2 evolved here because the UK has much higher case numbers than other countries.

But it is possible that the variant was imported from abroad and then started to spread in the country.

Why is it only in a few countries?

AY.4.2 has been spotted in more than 40 countries including the UK, Germany, Denmark and the US to date.

It may not have been spotted in other places due to a lack of Covid surveillance, which would lead to new sub-variant not being spotted.

But travel restrictions may also be behind the slow spread, which have made it less likely that the virus will be passed between countries.

How infectious is the sub-variant?

Experts estimate that AY.4.2 is around 10 per cent more infectious than the Delta variant.

They say this may lead to a marginally higher number of cases, but that it will not trigger a spike similar to that seen when Delta arrived in the UK.

Should I be concerned about AY.4.2?

Scientists say there is no reason to be too concerned about AY.4.2.

There is no evidence to suggest that vaccines are less effective against the sub-variant, or that it increases the risk of hospitalisation and death.

But laboratory tests are underway at labs in the UK and Denmark to assess this.

Professor Lawrence Young from Warwick University said: ‘There is no reason to suggest vaccines won’t be as effective.’

And Professor Anders Fomsgaard from Denmark’s Covid surveillance centre said: ‘We are not concerned by this. We see nothing in this point of time that indicates it is more contagious, resistant or pathogenic.’

The UKHSA suggested there was little reason to worry that the variant was more effective at evading vaccines than Delta.

The agency said: ‘After adjustment for the potential confounding variables there was no evidence AY4.2 differed significantly compared to non-AY4.2 Delta cases, both symptomatic and asymptomatic, across the three vaccines in circulation.’

Analysis suggested all the vaccines currently deployed in Britain were equally effective against the variant.

It comes after the World Health Organization (WHO) this week admitted it was now keeping tabs on the variant.

Experts have started to raise questions over whether the new strain is in fact more transmissible, as had previously been suggested by the data.

Northumbria University scientists involved in variant surveillance say it is still ‘unclear’ if AY.4.2 is actually more transmissible because too little is known about its mutations.

They pointed to the ‘founder effect’ as an alternative explanation, when a strain spreads rapidly because it is the only one in a specific cluster of cases, like a school.

But Professor Francois Balloux, a geneticist and Covid commentator at University College London who was among the first to raise concerns about the variant last week, said the slower rise was ‘still compatible’ with a 10 per cent transmission advantage.

And Professor Jeffrey Barrett, head of Covid surveillance at the Sanger Institute, said the data was ‘consistent with a small, but real, growth advantage vs other Delta’.

This sub-variant of Delta was first detected in the UK on June 26, according to UK-based tracking.

Scientists say it is likely AY.4.2 evolved here because the UK has much higher case numbers than other countries.

But it is possible that the variant was imported from abroad because other countries have worse variant surveillance than the UK.

It carries two key mutations, A222V and Y145H, which both slightly alter the shape of the spike protein which the virus uses to invade cells.

Scientists claim A222V was previously seen on another variant (B.1.177) first spotted in Spain before spreading to other countries.

But studies suggest it did not make the strain more transmissible, and that it was only spread by holidaymakers returning home.

There is more concern about the mutation Y145H, which slightly changes the shape of the site antibodies bind to making it harder for them to stop an infection from happening.

Scientists say this builds on mutations in Delta, and could make the subtype even more resistant to vaccines than its parent.

AY.4.2 has been recorded in about 40 countries to date, but the UK is the only one seeing a sustained outbreak of the subtype, other than Poland.

It did rise to around one in 50 Covid cases in Denmark in early September, but it has now fallen again to below one in 100. Experts in the country say they are not concerned about AY.4.2.

UK health officials labelled it a ‘variant under investigation’ last week. This category is reserved for variants which are spreading in the UK that may be more transmissible or better able to evade vaccines than other mutant strains, but is a step below ‘variant of concern’ which includes Delta and Alpha. 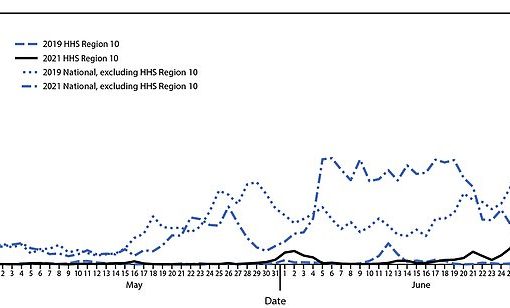 A heatwave that struck the Pacific Northwest at the end of June caused a spike in heat-related emergency room visits, according to […] 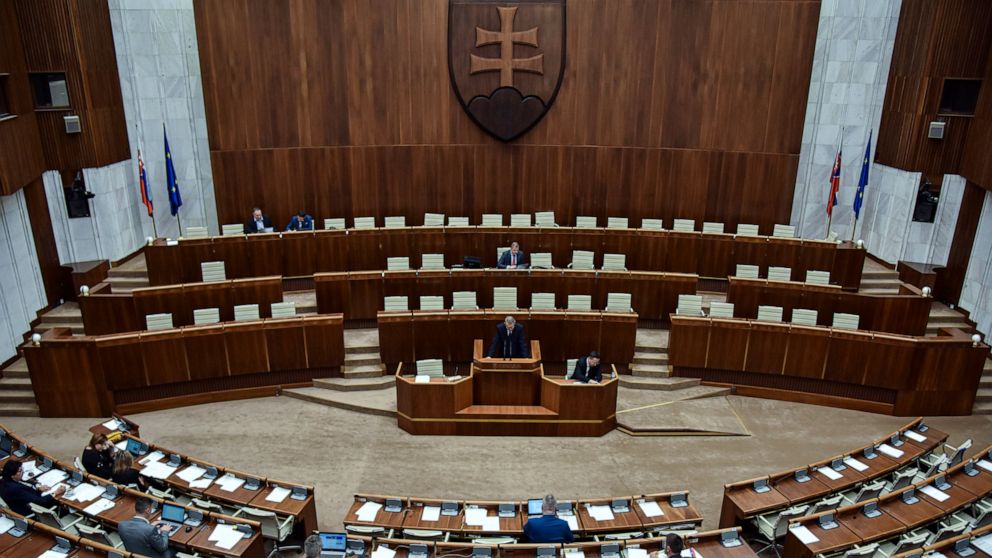