The CIA’s Iran chief, described by his colleagues as “legendary,” is being forced to retire as the center he oversees is folded back into the agency’s larger Middle East division, according to former CIA officials.

The official, Mike D’Andrea — nicknamed the “Dark Lord” or “Prince of Darkness” — had been granted waivers that allowed him to continue working at the CIA past the mandatory retirement age, according to former agency officials. But the agency declined his most recent retirement exception, according to these officials. D’Andrea’s retirement was first reported by the New York Times.

“They decided not to extend him again,” says a former senior CIA official. “It was basically, ‘Look, you’re not going to go any higher, we need new thinking, we need new people,’ and so they eased him out. He didn’t volunteer.”

A small cadre of other senior CIA officials who had also been receiving retirement waivers were also told their tenure would no longer be extended, said another former senior agency official.

D’Andrea has run the agency’s Iran operations since 2017. It was the final assignment in a career former colleagues consider among the most consequential in the agency’s recent history.

CIA officials often credit D’Andrea, who led the agency’s counterterrorism efforts from 2006 to 2015, with revolutionizing the CIA’s terrorist-hunting efforts, and particularly the armed drone program that would, under his watch, eviscerate al-Qaida leadership.

The CIA’s drone program arose at the dawn of the war on terror, with senior agency counterterrorism officials looking for ways to repurpose unmanned surveillance aircraft as killer drones.

The CIA “built identical houses to what you’d find in Afghanistan” at a Nevada test site, recalled a former senior agency official. “And [the missiles fired from the drones would] go through one end of the house and out the other side without exploding. So they had to work on different warheads that would go through one wall and detonate inside and this kind of stuff.”

The CIA was conducting legal drone strikes soon after 9/11, targeting members of al-Qaida in Afghanistan. But it was under D’Andrea’s leadership that the drone program really took center stage.

The CIA would conduct over 500 strikes using armed drones during the Obama administration, killing thousands of militants and hundreds of civilians. Critics questioned the legality of the program and decried the civilian deaths, though CIA officials say the agency was careful to avoid taking innocent lives.

Even so, D’Andrea “was probably the most lethal leader in the U.S. government for his tenure,” said a former senior CIA official. “He was the grim reaper for the enemy.” The agency’s counterterrorism program under D’Andrea was “bone-crushing and relentless,” recalled this former official.

“If he was a combatant commander, he would have been sitting in the galley for the State of the Union, he would have had all the accolades, and then some, that David Petraeus ever had,” said another former senior CIA official. “He ran that war.”

D’Andrea’s biography and quirks became part of his legend: a soft-spoken, professorial figure notorious for keeping all the lights dimmed in his office; the chain-smoker who would spend hours exercising on the elliptical, drinking Mountain Dew; and the middle-age convert to Islam who ran a lethal campaign targeting Muslim religious extremists.

With D’Andrea at the helm, the CIA’s counterterrorism center functioned like a continuous, rolling decapitation operation for al-Qaida leadership, according to former officials.

“There came a point where the life expectancy of the al-Qaida chief of operations was about a month,” said the former senior official. “Every time they’d name a new guy, bam, he was gone.”

Al-Qaida operators became so scared of the CIA’s drone program that their fear began to affect the organization’s morale, said the former official. The CIA even once picked up signals intelligence between two senior al-Qaida officials where one declined a promotion — ostensibly because he was worried about the added risks, according to this official. “The guy was saying, ‘I don’t want the job; I’m happy where I am,’” recalled the former official.

Under D’Andrea’s watch, the CIA scored an epochal victory when it pinpointed Osama Bin Laden to the Pakistani garrison town of Abbottabad; in 2011, Navy SEALs raided the compound and killed Bin Laden.

The dark prince’s dedication to his work was unsurpassed, say former officials, who described him often pulling 12- or 14-hours days, seven days a week.

During D’Andrea’s tenure as the CIA’s top counterterrorism official, he would sleep in the office every few days on a cot, say officials, and would often be awake and reading cable traffic by 4 or 5 a.m.

“God forbid you showed up at 7:30 a.m. to get ready for the 8 o’clock meeting,” recalled a former senior official. “You were fucked.” There were at least 50 people in those daily meetings — all experts on various terrorism issues — “and no one in that room knew more than he did,” said this former official.

Some former officials described D’Andrea as understandably demanding; others, as simply cruel. He was like a “​​one man gauntlet of death, throwing stuff at you to make sure your op [was] tight,” said a former CIA official.

Some CIA personnel crumpled under the pressure, said former officials. But D’Andrea also elicited fierce loyalty from those who worked under him, and he would take the time to mentor junior CIA officers, citing mistakes from earlier in his own career as examples to be avoided.

Under D’Andrea, a number of African American CIA officers rose up to senior counterterrorism positions, according to a former official, a notable trend in an organization that has struggled with diversity issues, particularly in its senior leadership.

D’Andrea’s focus on al-Qaida was singular — to the exclusion of other counterterrorism threats, which sometimes irritated others in government.

“The military came to us and said, we need help on the Haqqani network … the Haqqani network is killing soldiers,” recalled a former senior CIA official. “And D’Andrea’s response, undiplomatically, was, well, that’s your problem. Our problem is al-Qaida. That’s what we’re getting paid for: to go after al-Qaida.”

The counterterrorism chief “had a philosophy that he articulated,” recalled the former official. “He said there are a handful of Salafists who need to be killed. There’s no amount of convincing and negotiating and discussion. They’re like mad dogs; you kill these people, you put them down.”

D’Andrea’s intense — and, as some former officials portrayed, almost maniacal — focus on al-Qaida, coupled with his propensity of micromanagement, would lead to what former officials describe as the darkest moment of his career: a 2009 suicide bombing by a Jordanian triple agent in Khost, Afghanistan, that killed seven CIA officers.

It was the deadliest day for the CIA in decades, and many agency officials blamed D’Andrea. He “staffed his places with his people, in a way that was entirely inappropriate,” said a former senior CIA official. Some believed the CIA base chief in Khost had lacked the necessary operational experience.

Even worse, some officials believed, was the way D’Andrea overstepped important boundaries in managing the CIA’s handling of the Jordanian agent. ​​“He was in the weeds providing tactical direction, and it broke down the chain of command in Kabul and Amman,” said the same former official.

Though some say D’Andrea mellowed with age, even fans of the former CIA counterterrorism chief say he could be abrasive and prickly — qualities that sometimes led to bruising bureaucratic battles inside and outside of Langley, and ultimately extinguished his chances at a long-desired ascension to the job of deputy director of operations (DDO), the highest-ranking position within the CIA’s clandestine service, say former officials.

Then, in 2013, Brennan was named CIA director. “That really got fucked up, when Brennan came over to be director,” recalled a former senior CIA official. It was “the final nail in the coffin” for D’Andrea’s dream of becoming DDO, said the former official.

D’Andrea and another decorated senior CIA officer, a Russia and counterintelligence specialist, were engaged in a “bloodsport” competition for the job, recalled another former senior agency official. “It was almost like you couldn’t pick one or the other,” said this person. So Brennan picked neither man. The other DDO candidate retired, recalled this former official — but D’Andrea stayed on.

In 2015, a CIA drone strike mistakenly killed an American civilian and an Italian civilian in Pakistan. Some officials believe that, for Brennan, this was the final straw. D’Andrea was relieved of leadership of the CIA’s counterterrorism operations.

“Throughout his long and distinguished CIA career, Mike D’Andrea was an exceptionally talented and dedicated intelligence professional who was responsible for some of the most significant counterterrorism successes in the years after 9/11,” said Brennan in a statement to Yahoo News.

D’Andrea could have retired. But he bided his time in a position charged with reviewing CIA covert operations already in progress, a job that that former colleagues say was a clear diminution from his previous role.

But the Trump administration, looking to get tough on Iran, provided new opportunities. In 2017, D’Andrea was picked to lead the CIA’s Iran Mission Center, which was spun up under the leadership of then-Director Mike Pompeo. D’Andrea oversaw a program focused on running aggressive covert operations against Tehran, say former officials.

The CIA recently announced that it was moving Iran operations back into the agency’s broader Middle East mission center as part of a larger bureaucratic reshuffling. Its director is now retiring along with it.

For many CIA officials, D’Andrea’s legacy remains secure. “What I would emphasize is: America was a safer place because of Mike D’Andrea,” says another former senior CIA official, who credited him with keeping the pressure on al-Qaida. “These guys could not stick their head out to catch a breath without getting whacked.”

LAUDERDALE-BY-THE-SEA, FLORIDA — Surely the most memorable moment from President Trump’s first address to a joint session of Congress, and to the […] 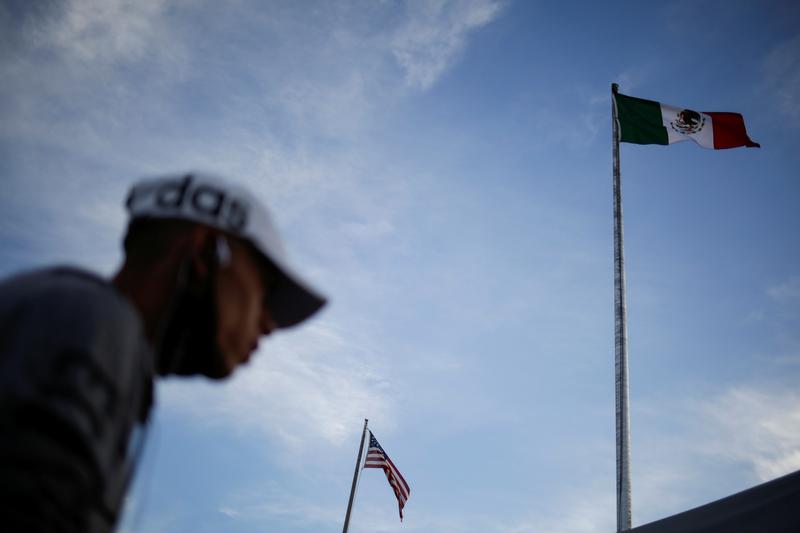 The flags of the U.S. and Mexico flutter at the Paso del Norte border bridge as seen from Ciudad Juarez, Mexico, July […]