A doctor has wowed TikTok users with a series of simple body hacks that he claims really work – from ‘supercharging’ your brain to getting rid of a tickle in your throat.

Dr. Anthony Youn, 48, from Detroit, revealed how to deal with the everyday issues in a viral video posted online.

The board-certified plastic surgeon – known as ‘America’s Holistic Plastic Surgeon’ – has made a series of videos called ‘Body hacks that really work’ for his 5.1million followers.

Here, FEMAIL reveals the top tips he gave to ‘transform your life’… 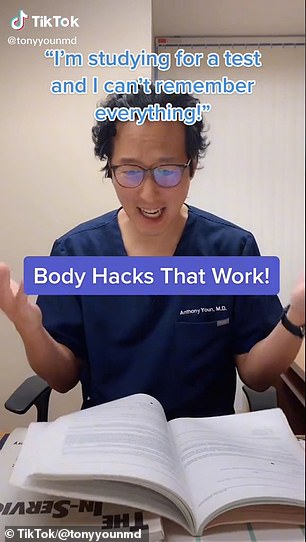 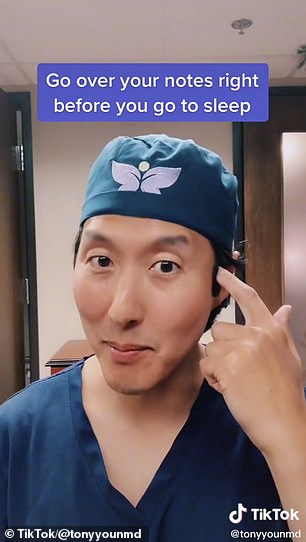 Dr. Anthony Youn, a board-certified plastic surgeon, has more than five million TikTok followers. He shares a variety of medical videos, including his series on health hacks

READ YOUR NOTES BEFORE BED TO REMEMBER THEM BETTER

The first hack he revealed included reading over notes for a test ‘before you go to sleep’.

‘Here’s a way to supercharge your brain,’ he said in the video. ‘Go over your notes right before you go to sleep and your brain’s going to help you remember it the next morning.

Read your notes before bed

According to Dr. Youn, if you’re studying for a test and can’t remember all the information you need to know, simply go over your notes right before you go to sleep.

This should help you remember them in the morning.

Dr. Youn says there is a simple solution to getting rid of a tickle in your throat – simply scratch your ear.

However, it’s important to note that if you have chronic throat itchiness, it could be a sign of a medical condition.

Scratch your arm to distract from the pain of an injection

Getting an injection in your arm is never pleasant, but according to the Detroit doctor, there is a way to make it less painful – scratch the area next to the injection site.

He explains that doing this confuses the nerves, which should reduce the pain.

Rub antiperspirant on a bite to reduce itchiness

Constant itching from a mosquito bite is enough to annoy anyone, but the medic says you can quell the sensation using a simple household item: antiperspirant.

This is reportedly down to the aluminum salts in the antiperspirant, which can help your body reabsorb fluid in the mosquito bite. This helps take down swelling as well as itchiness.

According to Lifehacker, research previously showed that a good night’s sleep shortly after your studies can significantly improve your ability to retain information.

Some of those participating learned the words at 9am and some at 9pm, shortly before going to sleep.

The results showed that when the participants needed to recall the unrelated words, those in the 9pm group did much better.

However, sleep made no difference when those involved in the study were told to remember the related words.

Next he answered one of the most frustrating medical mysteries: how to banish an annoying tickle in your throat.

He explained: ‘Scratch at your ear and that’s going to help make the tickle in your throat go away.’

Scott Schaffer, M.D., president of an ear, nose, and throat specialty centre in Gibbsboro, New Jersey, added that this works because the ear scratch results in a muscle spasm in the throat.

He told Men’s Health: ‘When the nerves in the ear are stimulated, it creates a reflex in the throat that can cause a muscle spasm.

‘This spasm relieves the tickle,’ he explained.

SCRATCH YOUR ARM TO DISTRACT FROM THE PAIN OF AN INJECTION

His third hack was a timely one; how to help with the pain of getting an injection in your arm.

It’s simple, according to Dr. Youn, who explained: ‘When you’re getting the shot, scratch the area right next to it – that’s going to confuse your nerves and make it not hurt.’

RUB ANTIPERSPIRANT ON A BITE TO REDUCE ITCHINESS

Finally, he offered helpful advice to those suffering from mosquito bites.

‘Take a little antiperspirant and rub it against the mosquito bite,’ he said. ‘That’s going to prevent it from itching.’

This is reportedly down to the aluminium salts in the antiperspirant, which can help your body reabsorb fluid in the mosquito bite. This helps take down swelling as well as itchiness.

Dr. Youn also shared the video with his 820,000 Instagram followers, many of whom were especially excited about the memory hack.

One commentator wrote: ‘I actually do the sleep after going through notes trick and it’s really helpful.’ Another added: ‘Number one really works, used it for many years.’ 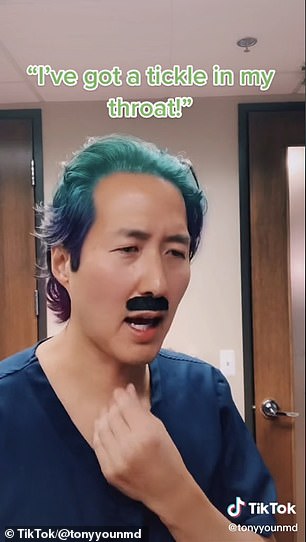 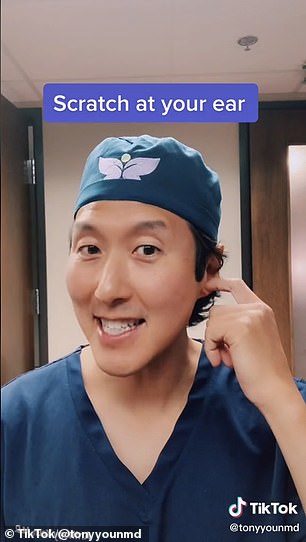 According to the doctor in his recent TikTok video, a simple solution to a tickly throat is scratching the inside of your ear 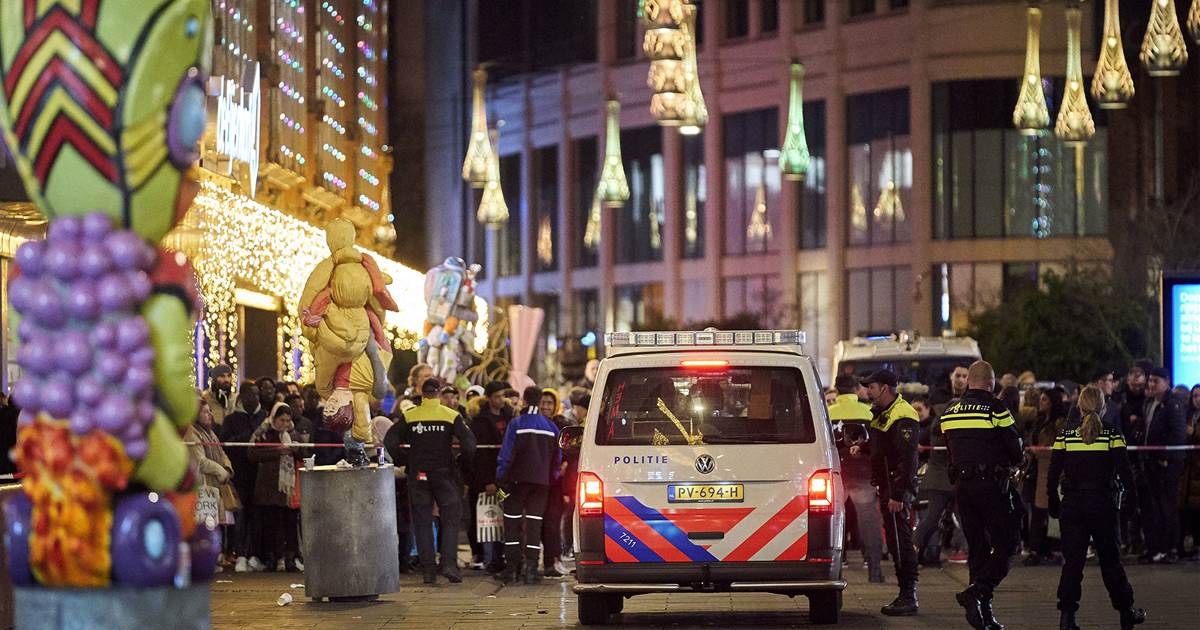 Three people were wounded Friday night during a stabbing attack in a shopping district crowded with bargain hunters in The Hague, Dutch […] 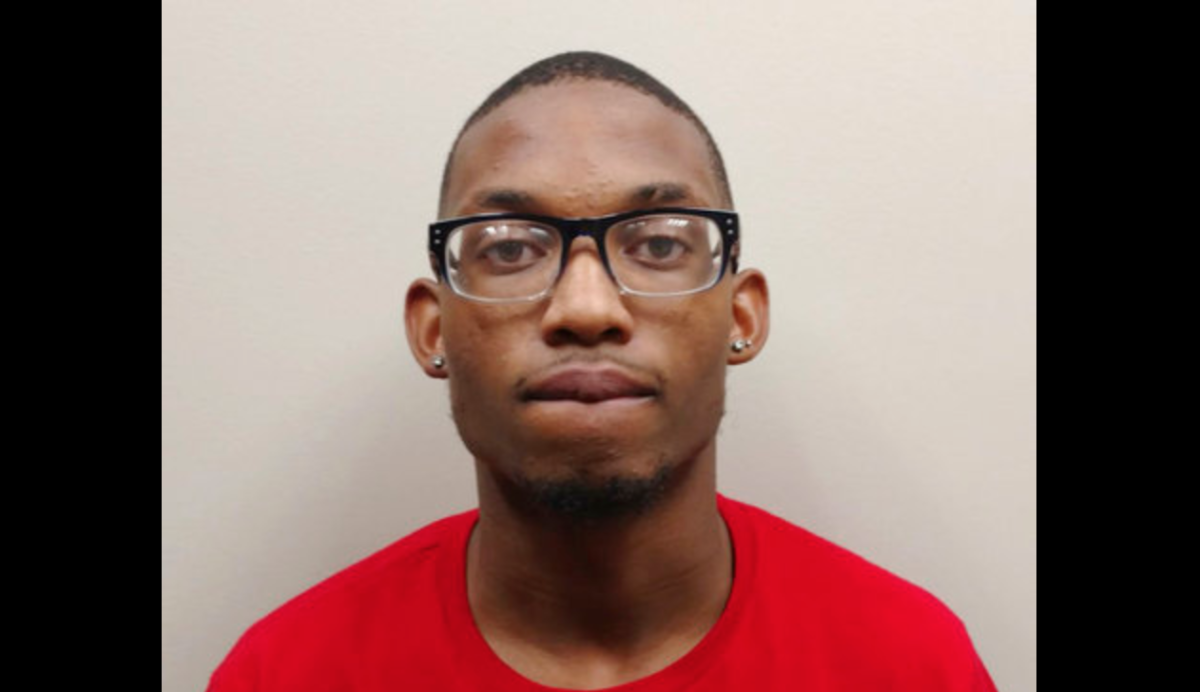 BATON ROUGE, La. (AP) — An arrest has been made in the shooting death of LSU basketball player Wayde Sims. Baton Rouge […]