An aircraft carrying 17 skydivers performed an emergency landing on a strip of grass next to a road after suffering an engine failure.

The incident, which occurred on June 25, took place after the aircraft suffered engine failure at 350ft above the ground, around a mile from Teuge Airport.

According to his Linked In, van Dam works as a videographer at Skydive Teuge in the Netherlands, and he was on hand with his camera to record the terrifying experience as the plane went down.

His video footage starts off as the plane is already heading for the ground, with those inside the aircraft being jostled about.

People can be seen holding onto the sides of the plane and assuming brace positions as they prepared to make contact with the ground.

A loud crack can be heard as the pilot successfully lands the Cessna Grand Caravan aircraft on a patch of grass running alongside a highway. 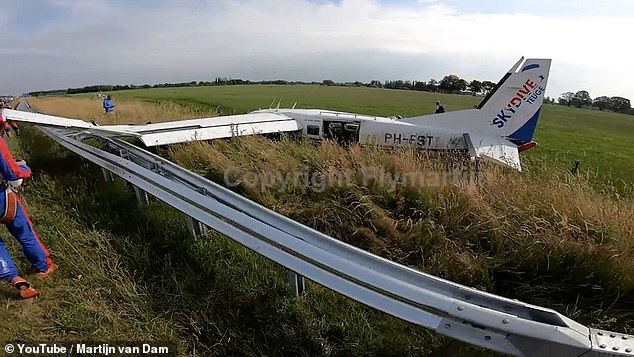 The aircraft was landed in a field running alongside the A50 motorway roughly 2Km west of Teuge Airport, the Netherlands, on June 25

The second the plane had come to a standstill, instructors can be heard yelling directions to those onboard to get outside and away from the landing site.

The last to exit the plane, van Dam ensured that the pilot was also unhurt in the crash landing before ushering him out as well.

Despite having landed on the side of a busy highway, the skydivers can all be seen hugging one another and hi-fiving amongst themselves as they celebrate escaping the emergency landing seemingly unharmed.

When all those onboard are at a safe distance from the plane, van Dam gives the pilot a hug and one of the passengers, believed to be British, says: ‘Well done man, such a good job!’

Speaking at the end of the video, van Dam said: ‘What I was afraid of all my jumping life just happened… The outcome is amazing. The aircraft is broken… wow, wow.’

At the end of his video, van Dam also issued a few pieces of advice for anybody else who should find themselves in a similar situation in the future. 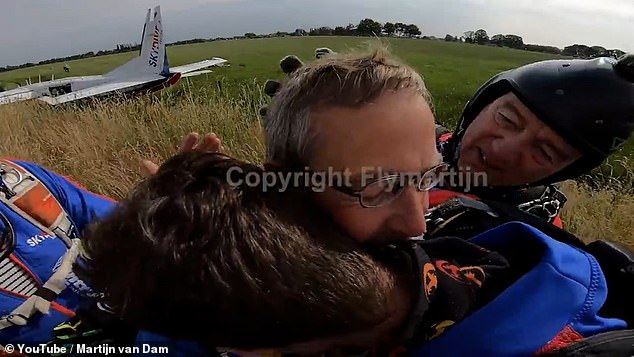 Do you know anyone onboard the plane?

Send an email to  [email protected]

He advised always wearing your seatbelt with quick release, make sure emergency landing procedures have been properly trained and opening and locking the plane door before the landing.

Van Dam also joked that you should also have your camera ready.

An incident report published on the Aviation Safety Network read: ‘A Cessna 208B Supervan 900 skydiving sustained substantial damage during a forced landing in a field 2 km west of Teuge Airport, the Netherlands, next to the A50 motorway.

‘The engine had lost power shortly after takeoff from Teuge Airport. The pilot made an emergency landing in a meadow.

‘The aircraft collided with a billboard with the right wing, swung and came to a stop against a crash barrier next to the highway.’ 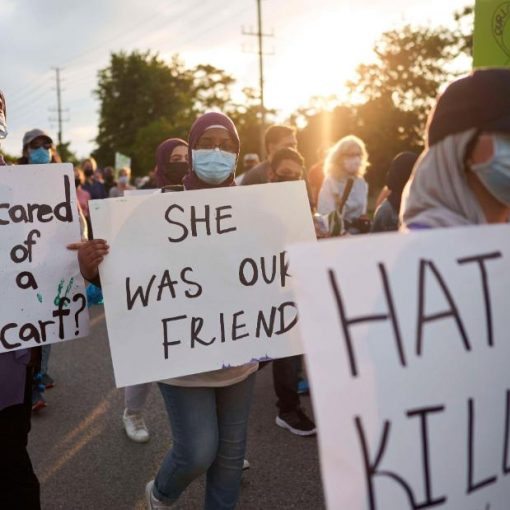 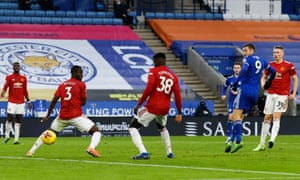 Isak van den Berg, 67, and his wife Ina, 61, were attacked at their home near Boshof in the Free State province […]