First set: Van de Zandschulp *1-5 Medvedev (*denotes next server) Medvedev gets pegged back to 30-all, but two big first serves – the second an ace – takes him one game away from the first set.

First set: Van de Zandschulp 1-4* Medvedev (*denotes next server) At 30-all, Medvedev steps in to punish a loose drop shot, and it’s a double break as Van de Zandschulp sends a shot narrowly wide. He hasn’t been terrible by any means, but this first set already looks over.

First set: Van de Zandschulp *1-3 Medvedev (*denotes next server) Medvedev breezes to a love hold. There is a shadow over the bottom half of the court, which is making things tricky for both players – although less so for Medvedev so far.

First set: Van de Zandschulp *0-2 Medvedev (*denotes next server) Medvedev didn’t have to do much to get that break; it was a nervous start from the qualifier. Medvedev’s first serve is a little rusty, but a pair of accurate second serves sets up the hold.

First set: Van de Zandschulp 0-1* Medvedev (*denotes next server) The Dutchman serves first, and double-faults before losing a long rally. Early break points for Medvedev, and he takes it as Van de Zandschulp fires an attempted winner side.

Here they come! Both players are out at a sunlit, half-full Arthur Ashe Stadium. Van de Zandschulp has never played on this court before – in fact, this is his first-ever trip to New York.

His opponent has beaten two top-16 seeds to get here, but Daniil Medvedev has been quietly impressive too, beating Richard Gasquet, Dominik Koepfer, Pablo Andújar and Dan Evans without dropping a set.

Van de Zandschulp has beaten Carlos Taberner, Casper Ruud, Facundo Bagnis and Diego Schwartzman to get here, and is an 18-1 shot to win this match.

Here’s a reminder of the quarter-final line-ups. Tuesday’s evening games will be Krejcikova v Sabalenka and Auger-Aliassime v Alvarez. Decent!

The players will be out on court in 10 minutes or so. As mentioned below, Emma Raducanu powered into the quarter-finals with a 6-2, 6-1 win over Shelby Rogers. The beaten American, who knocked out Ash Barty in the previous round, gave her thoughts on social media abuse afterwards:

“I’m going to have nine million death threats and whatnot … it’s very much polarising, one extreme to the other very quickly. You could probably go through my profile right now – I’m probably a ‘fat pig’ and words that I can’t say right now. You try not to take it to heart … it’s the unfortunate side of any sport and what we do.”

The absence of several stars and a series of shock results has given this US Open a unique feel, with some unexpected and unfamiliar names in the quarter-finals.

Emma Raducanu will be back on court tomorrow, but she’s not the only qualifier still in contention. Botic van de Zandschulp, who faces No 2 seed Daniil Medvedev today, is just the third qualifier ever to reach the men’s quarter-finals at Flushing Meadows.

The Dutchman has enjoyed a remarkable run, winning three qualifying matches from a set down, coming back from two down in the first round and then dispatching seeds Casper Ruud and Diego Schwartzman. Medvedev starts the afternoon’s opening match as a big favourite, but the qualifier might feel destiny is on his side.

Raducanu is also not the only breakout star left in the women’s draw. Canadian teenager Leylah Fernandez has defeated two former champions, Naomi Osaka and Angelique Kerber, to reach the last eight. Next in her sights is Elina Svitolina, a top-10 mainstay yet to reach a grand slam final who eliminated Simona Halep in the last 16. 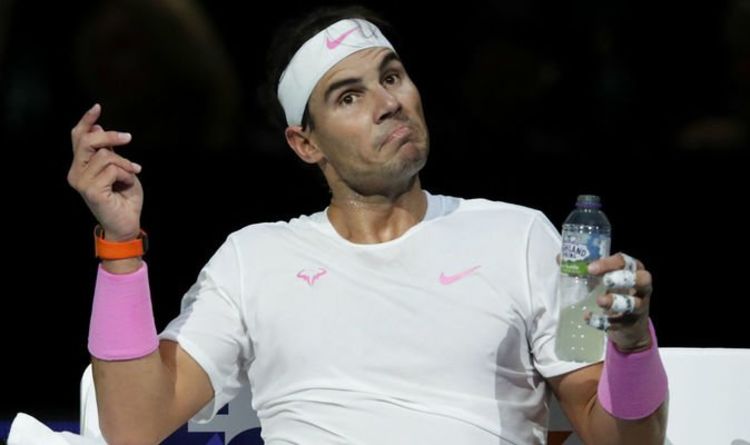 Rafael Nadal insists injury was not a factor after he was beaten in straight sets by Alexander Zverev at the ATP Finals. […]

The Leeds midfielder Kalvin Phillips is leaning against a table with his family. His gran pipes up. “Bielsa,” she says with a […]