Jeopardy! producer Mike Richards tried to keep a low profile while spotted out for the first time since quitting his hosting gig last Friday.

Richards was out just a day after revealing he would no longer replace the late Alex Trebek on the beloved game show, seen blowing off some steam with a Saturday stroll around his LA neighborhood.

And not long after his walk, it was announced Big Bang Theory actress Mayim Bialik will temporarily fill in as syndicated host of the show, according to Variety. 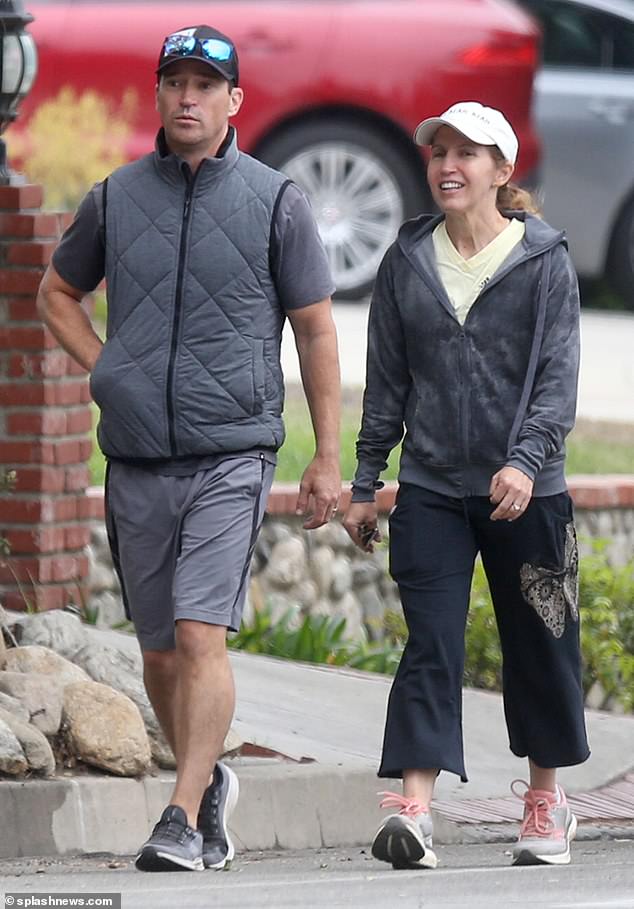 Saturday stroll: Ousted Jeopardy! host Mike Richards kept a low profile while out after news he was no longer replacing Alex Trebek as host of the beloved trivia show

Bialik is scheduled to tape three weeks of episodes when production resumes this week for a total 15 episodes. To-be-announced guest hosts are slated to take over from there.

It seemed Richards was still wrapping his head around the controversy while out.

Dressing for comfort, the Burbank, California native donned a sporty all-grey look with a tee shirt, shorts, and a vest.

Richards, who was joined by wife Stephanie and a friend during his walk, looked animated as he chatted with his companions, throwing his hands up dramatically while talking.

On Friday the longtime TV pro announced he was stepping down as the new host of Jeopardy! effective immediately over a series of crude comments that he made on a podcast in 2014 where he mocked women, Jews and Haiti.

Richards released a statement through Sony Pictures Entertainment, which produces the long-running game show, saying that carrying on with his hosting duties would be ‘too much of a distraction’ for the fans of Jeopardy! amid the controversy swirling around his past remarks. 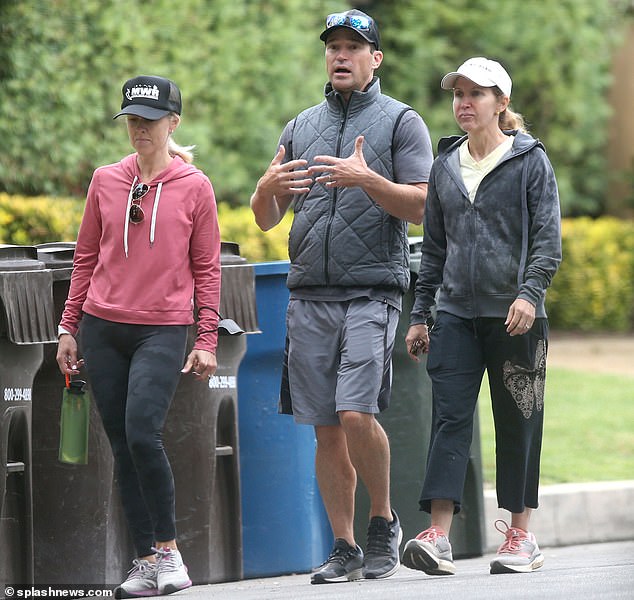 Animated: Richards, who was joined by wife Stephanie and a friend during his walk, looked animated as he chatted with his companions, throwing his hands up dramatically while talking 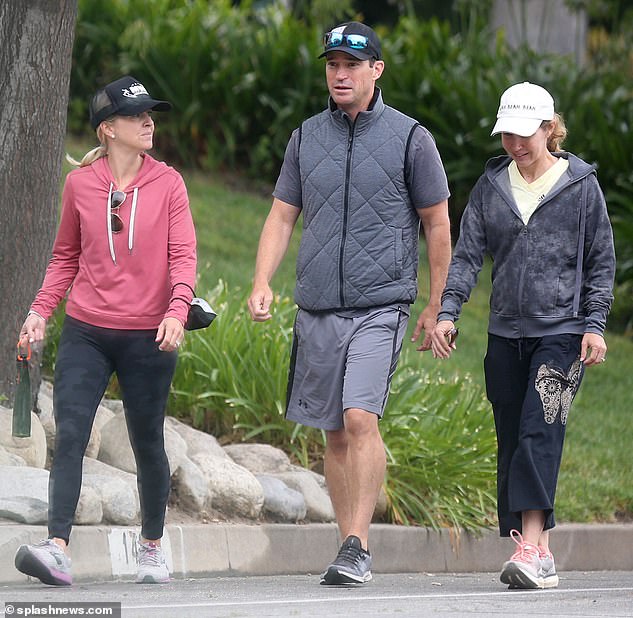 Easy: Dressing for comfort, the Burbank, California native donned a sporty all-grey look with a tee shirt, shorts, and a vest

Officials at Sony said on Friday that Richards would stay on as the executive producer of Jeopardy!

‘It pains me that these incidents and comments have cast such a shadow on Jeopardy! as we look to start a new chapter,’ Richards wrote in his letter addressed to staff.

‘As I mentioned last week, I was deeply honored to be asked to host the syndicated show and was thrilled by the opportunity to expand my role. However, over the last several days it has become clear that moving forward as host would be too much of a distraction for our fans and not the right move for the show. As such, I will be stepping down as host effective immediately.’

Richards’ bombshell announcement ground the production of the new season of Jeopardy! to a halt on Friday, just one day after filming had begun.

As Sony resumes the search for a new permanent host, the show will be bringing back a parade of guest hosts who will be announced later. Past hosts included Anderson Cooper and LeVar Burton. 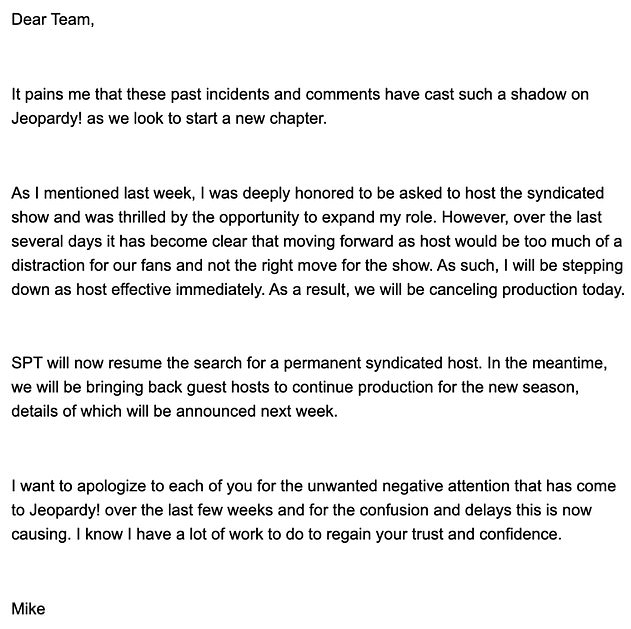 Out: On Friday Richards released this statement announcing his resignation as the new host of Jeopardy! amid a raging controversy over his past remarks

New information has resurfaced on Richards, (pictured) who was recorded making crude comments about women, Jews, and Haiti on a podcast he hosted in 2014

‘I want to apologize to each of you for the unwanted negative attention that has come to Jeopardy! over the last few weeks and for the confusion and delays this is now causing,’ Richards continued. ‘I know I have a lot of work to do to regain your trust and confidence.’

Producers at Sony said they support Richards’ decision to step down as host after voicing their concerns over his ‘offensive language.’ Nevertheless, they praised him for leading the show over the past two years.

‘It is our hope that as executive producer he will continue to do so with professionalism and respect,’ the company stated, as New York Times reported.

Richards’ abrupt exit as host move comes nearly seven years after he was recorded on the podcast ‘The Randumb Show’ referring to his former assistant, Beth Triffon, as a ‘booth slut,’ criticizing women’s weight and praising ‘the average white-guy host.’

Richards, who was an executive producer for The Price is Right at the time, hosted the podcast from 2013-2014. 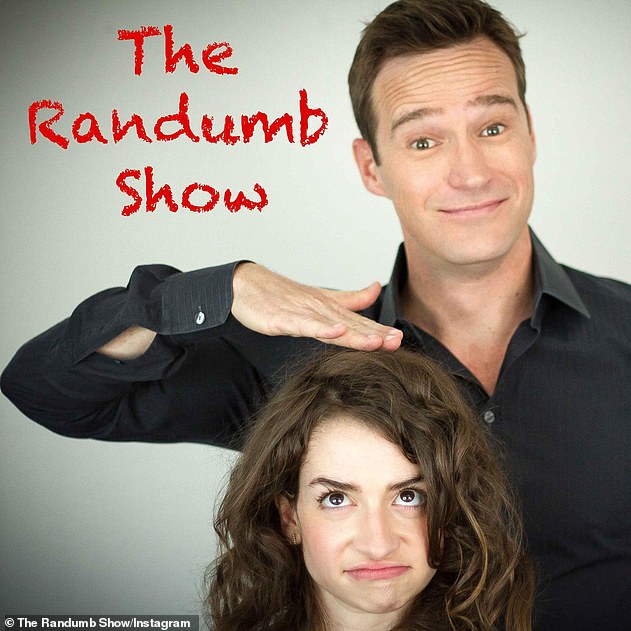 Titled, ‘The Randumb Show,’ Richards (above) was recorded referring to his former assistant, Beth Triffon, (below) as a ‘booth slut,’ while criticizing women’s weight and praising ‘the average white-guy host.’ 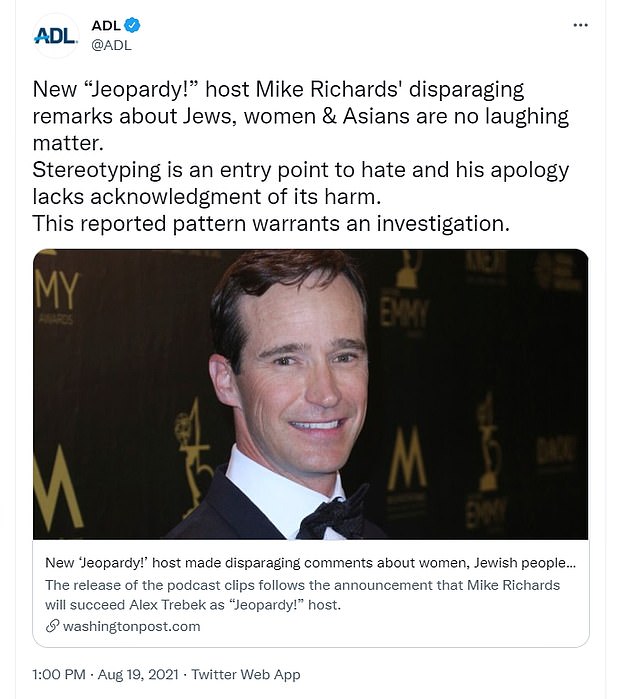 During the segment, Triffon was discussing working as a model at the annual CES tech show event in Las Vegas, when Richards dubbed her a ‘booth ho,’ ‘booth slut’ and ‘boothstitute.’

In another episode, the host commented that one-piece swimsuits made women look ‘really frumpy and overweight,’ while in January 2014, he responded to a remark about big noses saying, ‘Ixnay on the ose-nay. She’s not an ew-Jay.’

In a segment when Triffon was outlining issues with her apartment, Richards responded, ‘Does Beth live, like, in Haiti? Doesn’t it sound like that? Like, the urine smell, the woman in the muumuu, the stray cats.’

In a statement to The Ringer, Richards apologized for the inappropriate comments saying, ‘It is humbling to confront a terribly embarrassing moment of misjudgment, thoughtlessness, and insensitivity from nearly a decade ago.’

‘Looking back now, there is no excuse, of course, for the comments I made on this podcast and I am deeply sorry,’ Richards added.

Richards’ apology has fallen largely flat, prompting the Anti-Defamation League on Thursday to call for a formal investigation into his ‘pattern’ of offensive comments.

‘New “Jeopardy!” host Mike Richards’ disparaging remarks about Jews, women & Asians are no laughing matter,’ the pro-Jewish organization tweeted. ‘Stereotyping is an entry point to hate and his apology lacks acknowledgment of its harm.’

Fans have shared their outage that Richards was being considered as the new host – despite his murky past of harassment and discrimination allegations. 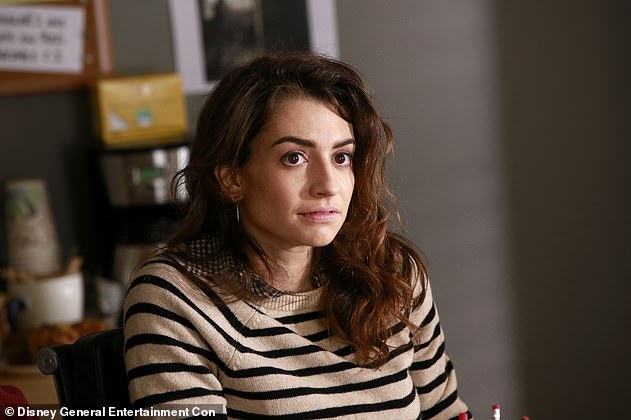 During the segment, Triffon (pictured) was discussing working as a model at the CES when Richards dubbed her a ‘booth ho,’ ‘booth slut’ and ‘boothstitute.’

In another episode, the host commented that one-piece swimsuits made women look ‘really frumpy and overweight,’ while in January 2014, he responded to a remark about big noses saying, ‘Ixnay on the ose-nay. She’s not an ew-Jay.’

Richards, has served as the show’s executive producer since 2020, and was among the show’s rotating cast of guest hosts after longtime ‘Jeopardy!’ king Alex Trebek died in November after a long-fought battle with pancreatic cancer.

According to Variety, which broke the news that Richards was the front-runner for the hosting gig, Sony Pictures Television executives were impressed by his ‘command of the fast-paced game and easy on-air manner’ when he guest hosted in late February.

But fans, who have been backing Star Trek star LeVar Burton as the next host, were furious with the choice – with many bringing up Richards’ involvement in two harassment lawsuits, brought by two former models at The Price is Right while he was a producer there.

Brandi Cochran sued his company, FremantleMedia North America and The Price is Right Productions in 2010 over claims producers sidelined and harassed her after she became pregnant. 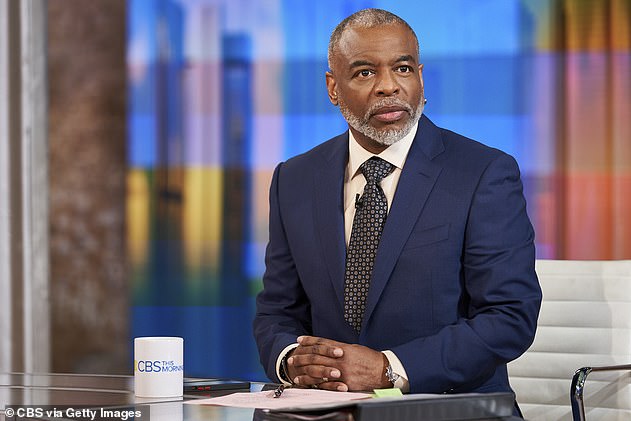 Others who had guest hosting stints on Jeopardy! the past year in auditioning for the role included LeVar Burton (pictured), Buzzy Cohen, Anderson Cooper, Katie Couric, Ken Jennings

Richards was not named as a defendant in the lawsuit, but Cochran alleged in it that he stopped talking to her as much after she became pregnant and implied that she would have been fired had the pregnancy not been a secret.

She claimed she was pressured to announce her pregnancy on air, and when she said she was carrying twins, she was given less work and was subjected to jokes about her weight gain from her co-workers.

Cochran revealed in the lawsuit that one of her twins died in a miscarriage, while the other was born three months premature.

She claimed she was still stressed about work after giving birth and felt pressured to lose the weight so she could return to her job, only to discover that she had been deleted from the show’s website.

Cochran was initially awarded more than $8 million in compensatory and punitive damages, which was later overturned, as she settled with the company.

Lanishia Cole, meanwhile, sued Richards and fellow producer Adam Sandler – not the actor – as well as FremantleMedia North America in 2011, for wrongful termination and sexual harassment.

She alleged that the producers berated her in front of her peers, and claimed Richards began ignoring her and favoring another model he was in a relationship with in 2009.

Cole claimed Richards hindered her modeling career by creating policies ‘which never before existed,’ according to the Los Angeles Times.

‘This case is about senior-level men in the entertainment industry exploiting power and control over women by bullying and harassing female talent,’ Cole told the Times.

The lawsuit was settled in 2013, and Richards, who denied any wrongdoing, was dismissed as a defendant before the settlement was reached.

Richards was named by Sony as host of the show earlier this month, with Mayim Bialik selected to host specials and spin-offs, following Trebek’s death.

Trebek, who hosted the show for more than 8,000 episodes since 1984, died from pancreatic cancer November 8, less than two weeks after he pre-taped his last series of episodes in October. 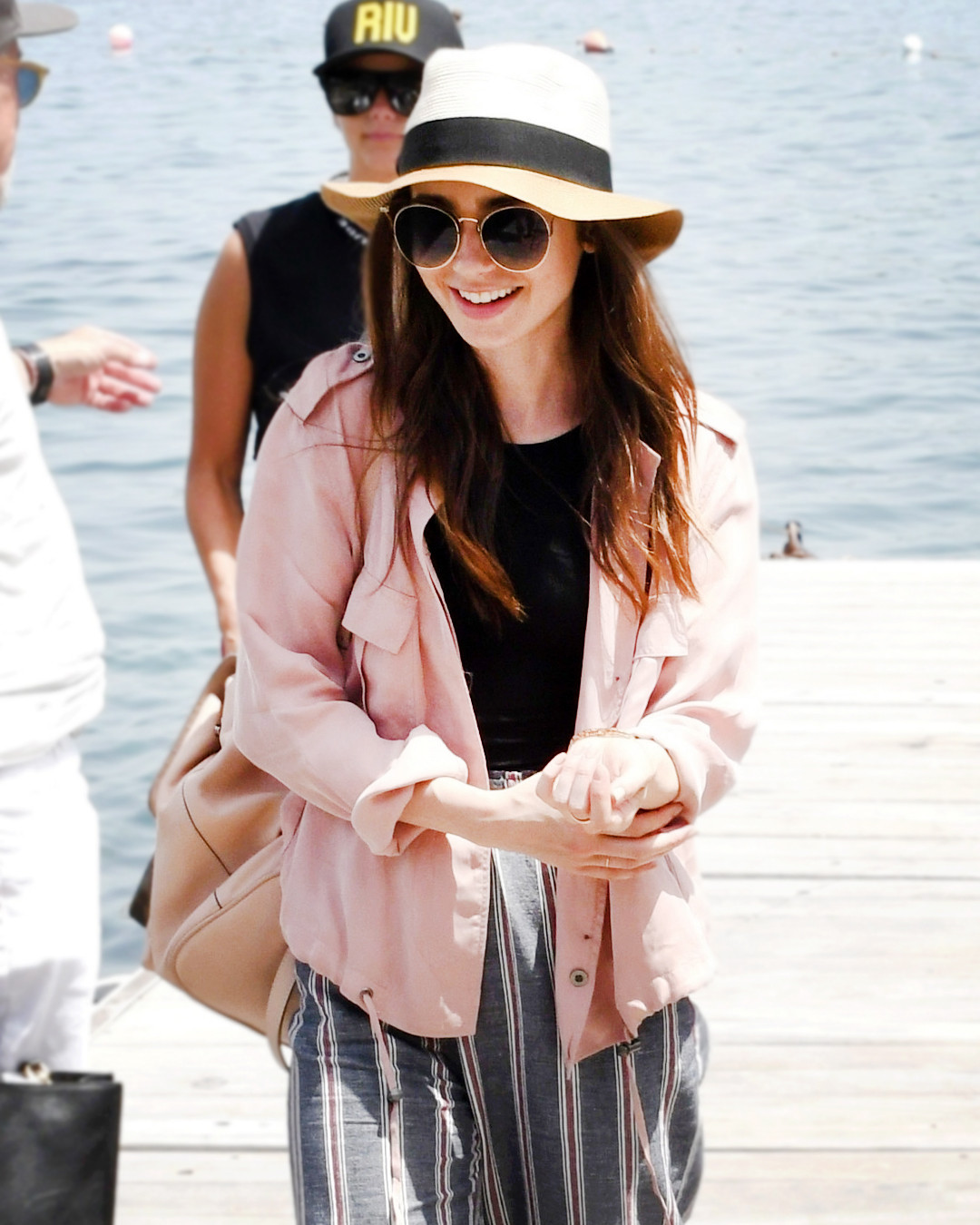 Newspress / BACKGRID Lily Collins has perfected summer outerwear. While the hot weather may inspire you to grab your bikini and head to […] 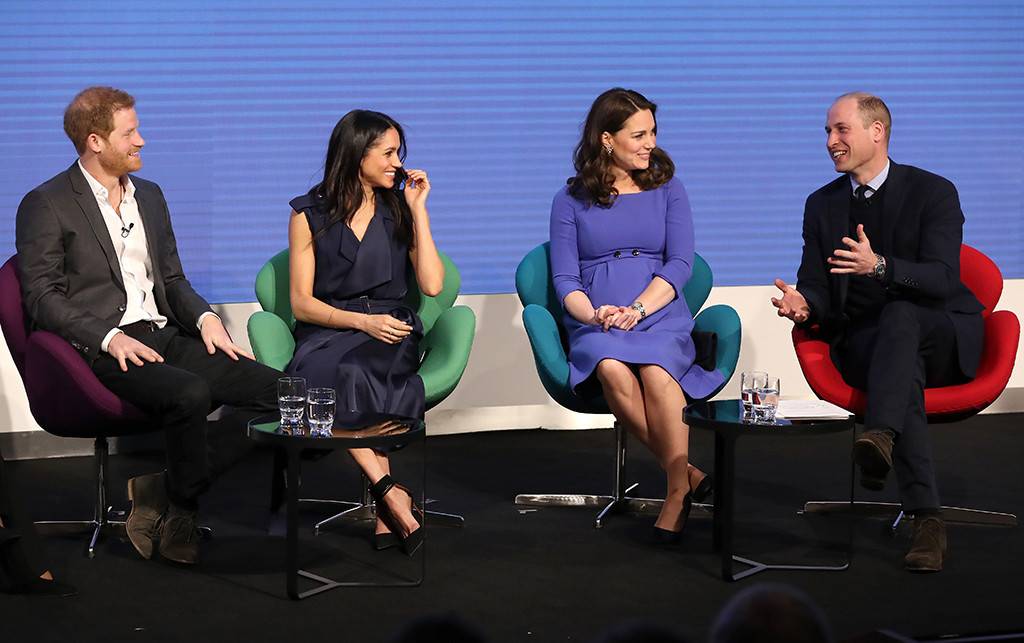 Unlike most kids, Prince Harry never speculated about what he was going to be when he grew up. From a young age it […] 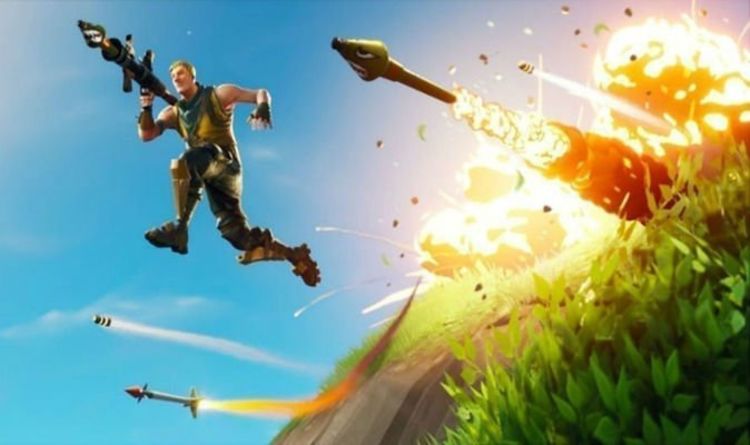