In addition to being one of the Seven Natural Wonders of the World, the Grand Canyon is a living history book, revealing great geological epochs on its various strata.

Now, researchers in Colorado think they’ve untangled the mystery surrounding a billion-plus year ‘gap’ in that record, known as ‘The Great Unconformity.’

In a paper published in the journal Geology, they theorize that the breakup of an ancient supercontinent, known as Rodinia, more than 630 million years ago, triggered a series of small, but potent, earthquakes that shoved millennia of rock and sentiment on the canyons’ eastern side into the ocean.

‘It’s also a billion years during an interesting part of Earth’s history where the planet is transitioning from an older setting to the modern Earth we know today.’ 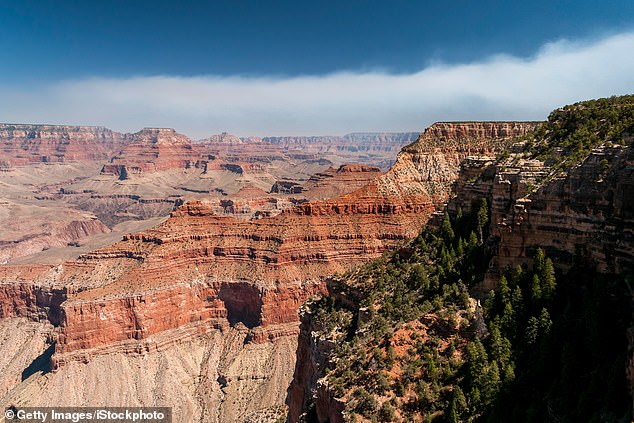 Rodinia formed approximately a billion years ago and broke apart between 750 and 633 million years ago, with its fragments reassembling  to eventually form Pannotia, a shortlived Pan-African supercontinent.

Rodinia’s dissolution is believed to have cooled the planet and opened the door for the massive, rapid evolution of primitive life in the Cambrian Period, but little is known about Rodinia’s geological history or even its configuration.

If its breakup is connected to the ‘Great Unconformity,’ it could shed more light on both.

‘The Great Unconformity is one of the first well-documented geologic features in North America,’ lead author Barra Peak, said in a statement.

‘But until recently, we didn’t have a lot of constraints on when or how it occurred.’ 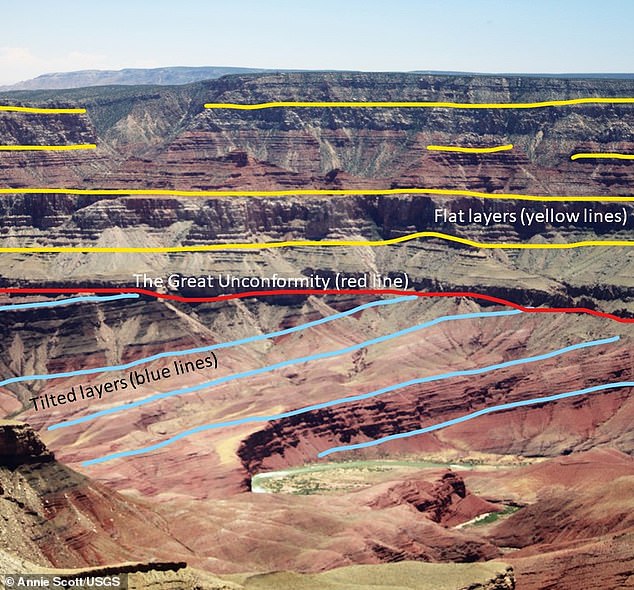 A recent photograph of the Grand Canyon from Walhalla Plateau, with the red line showing the Great Unconformity 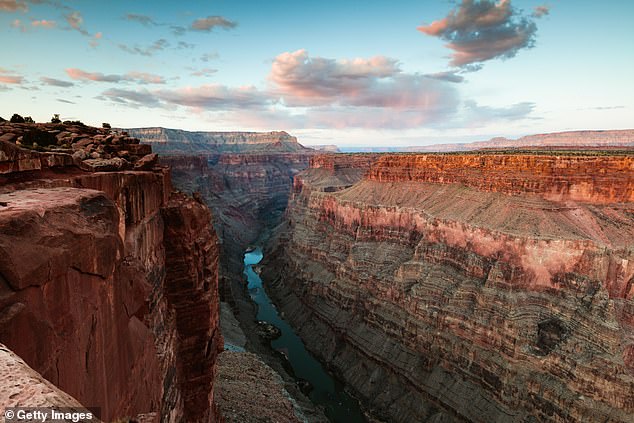 The difference in geological strata in the eastern and western sides of the canyon, known as ‘The Great Unconformity’ was caused a billion years of rock and sentiment getting submerged

Explorer and self-taught geologist John Wesley Powell observed the Great Unconformity during his historic boat trip down the Colorado River more than 150 years ago in 1869.

Sketching a section of the canyon, he showed how the rock strata from the Middle and Late Proterozoic Era are nearly vertical, compared to the horizontal strata above them 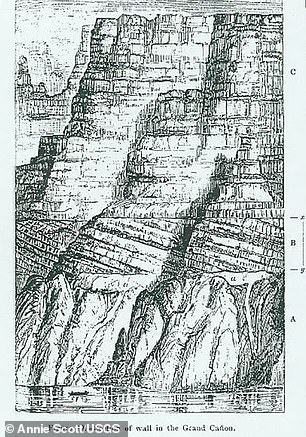 A drawing of a stratigraphic section of the Grand Canyon by John Wesley Powell from  1875. The area of the ‘B’ section between ‘x’ and ‘y’ represent the ‘unconformable’ areas that don’t match the direction of the other strata

‘At the bottom, you can see very clearly that there are rocks that have been pushed together,’ she said in the release.

‘Their layers are vertical. Then there’s a cutoff, and above that you have these beautiful horizontal layers that form the buttes and peaks that you associate with the Grand Canyon.’

Her team used ‘thermochronology,’ which tracks the history of heat in rock left by pressure from geologic formations being buried deep underground.

‘We have new analytical methods in our lab that allow us to decipher the history in the missing window of time across the Great Unconformity,’ co-author Rebecca Flowers, a professor of geological sciences at CU, said in the release.

Sampling stones from throughout the canyon, they found the western and eastern parts had different heat histories and likely went through different geological shifts over time.

‘It’s not a single block with the same temperature history,’ Peak said.

Judging by heat levels, basement rock in the west rose to the surface some 700 million years ago, while the equivalent rock was submerged under miles of sediment.

The vast difference was caused by the breakup of Rodinia, Peak said, with quakes and ‘faulting events’ contorting the land in different ways—and creating the Great Unconformity.

She and her colleagues are now looking exploring similar periods of lost time at sites around North America. Need to know What is it? An eco-warrior werewolf sim that plays better than it looks.Expect to pay $40/£35Developer CyanidePublisher NaconReviewed on […] 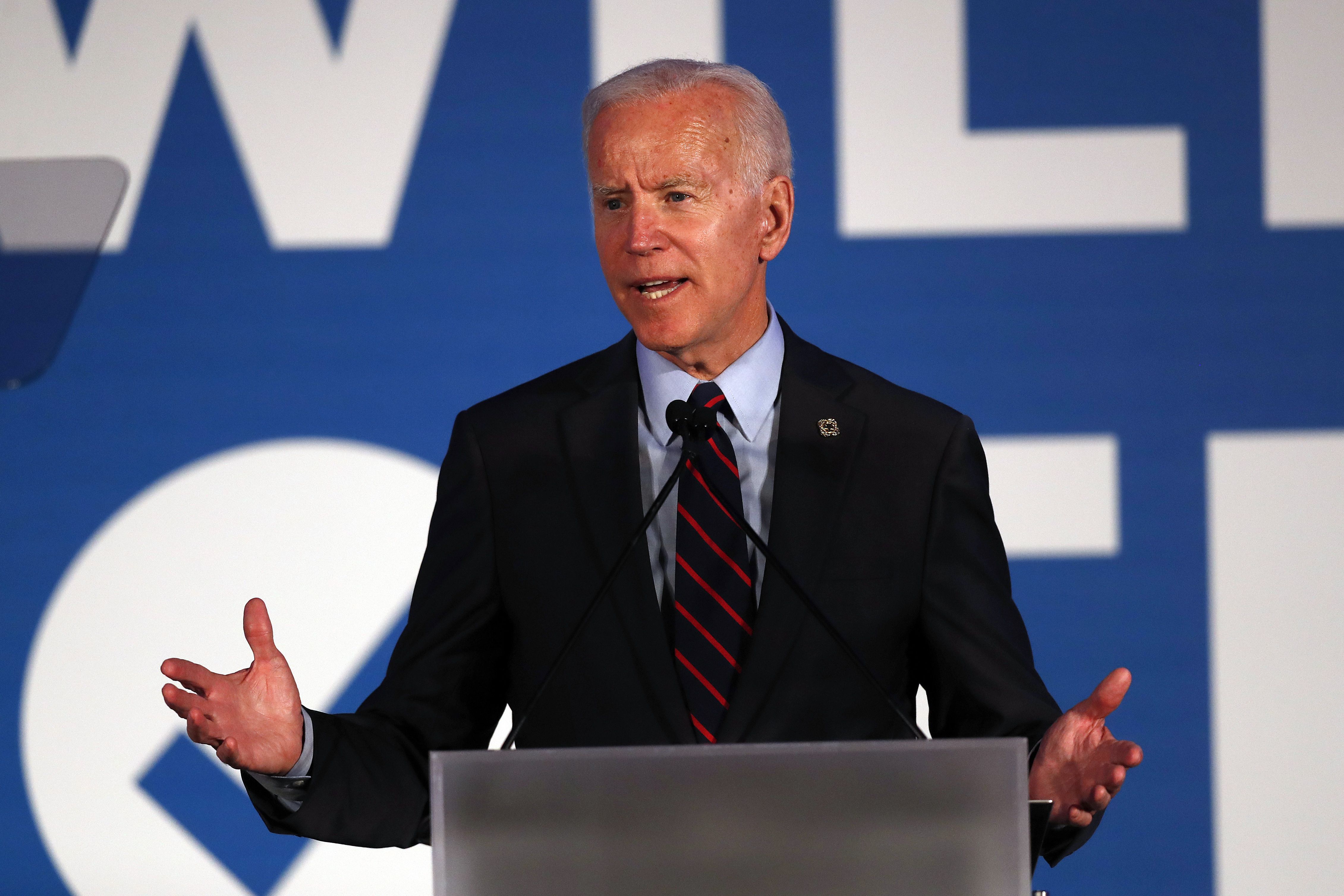 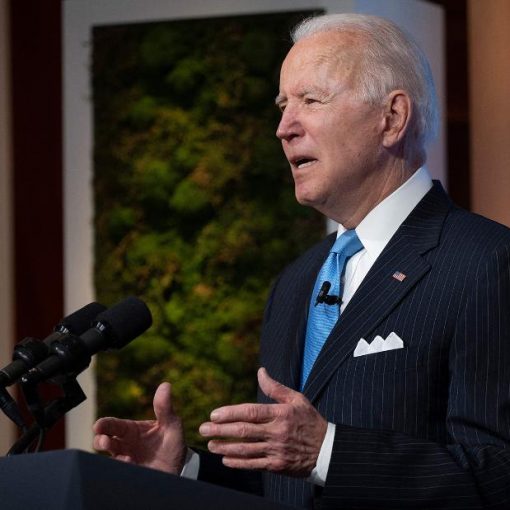