Researchers may have discovered a new species of tyrannosaur after performing a CT-scan on a subspecies that reveals their brains were very different from one another.

A group of researchers, led by those at Canadian Museum of Nature created a CT-scan of the brain of a mysterious dinosaur, Daspletosaurus, first talked about 50 years ago, was a tyrannosaur, a fearsome predator that lived in Alberta 75 million years ago and predated the Tyrannosaurus rex by 10 million years. 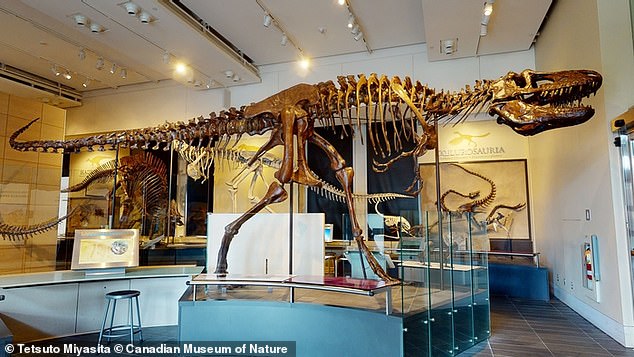 Experts may have discovered a new species of tyrannosaur. They performed a CT-scan on two Daspletosaurus (pictured) that reveals their brains were different from one another 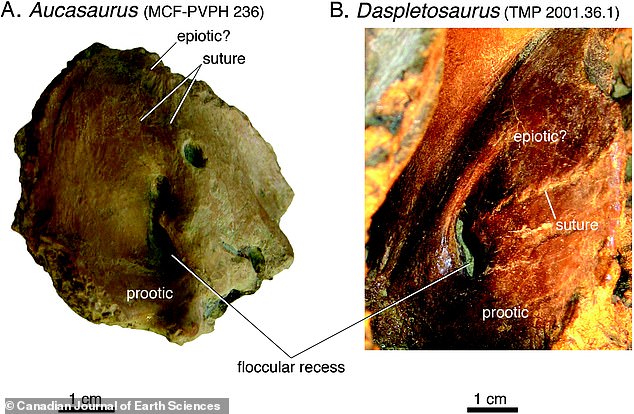 The two specimens lived roughly two million years apart and had differences in their brains, ear structure and braincases

Tyrannosaurs rex was a species of bird-like, meat-eating dinosaur.

It lived between 68–66 million years ago in what is now the western side of North America.

More than 50 fossilised specimens of T.Rex have been collected to date.

The monstrous animal had one of the strongest bites in the animal kingdom.

An artist’s impression of T.Rex

The scan, performed on two specimens, which lived roughly two million years apart, revealed that there were significant differences in both predators’ brains, ear structure and braincases.

‘We know that tyrannosaurs had relatively good-sized brains for a dinosaur, and this study shows that this pattern holds for Daspletosaurus,’ Dr Tetsuto Miyashita, palaeontologist with the Canadian Museum of Nature and senior author of the study, said in a statement.

‘Furthermore, based on the shapes of the brain, ear structure, and braincase, we suggest that these two specimens represent distinct species of daspletosaurs.’

The first species was discovered in 1921 near the Red Deer river in Alberta, but it wasn’t until 1970 when it was given the name Daspletosaurus torosus.

The second specimen, which was found in 2001 near Milk River in Alberta, is still being studied at the Royal Tyrrell Museum of Palaeontology in Alberta to determine if it is indeed a new species.

The family Tyrannosauridae, includes not only the T. rex and its bone-crushing bite, but also Albertosaurus, Gorgosaurus, Daspletosaurus and Tarbosaurus, according to the University of California, Berkeley.

Daspletosaurus has been thought of as sort of a catch-all for tyrannosaurs that did not firmly fall into one category or another, but with the new findings, that may no longer be the case.

‘Researchers have looked inside so few braincases in dinosaurs, typically one each for whatever species they studied, that this reinforced the assumption that these structures don’t change much within and among species,’ Miyashita added.

We just haven’t looked inside enough skulls to document variation.’ 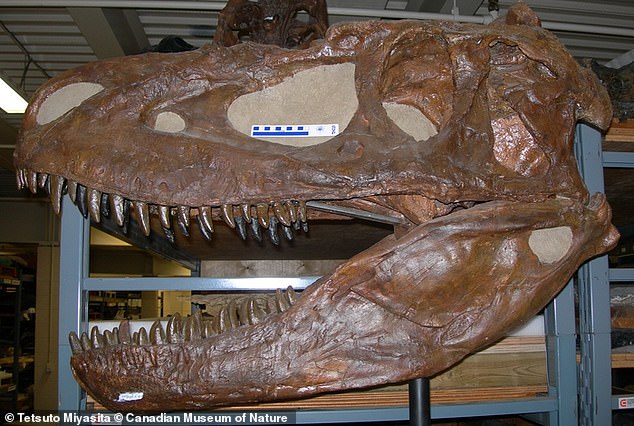 The first species (skull, pictured) was discovered in 1921 near the Red Deer river in Alberta The second specimen was found in 2001 near Milk River in Alberta 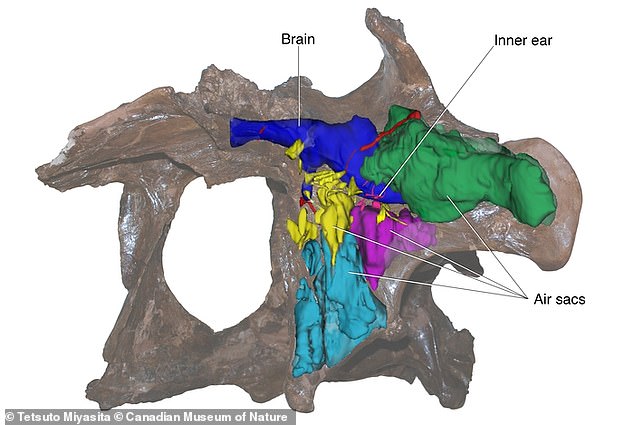 They also saw large air sacs that made up most of the braincase bones, in line with other tyrannosaurs In April, a study was published that suggested T. rex may have hunted in packs, similar to wolves

In 2020, a separate group of researchers uncovered a new species of Tyrannosaurus rex in Canada they nicknamed the ‘Reaper of Death.’

In looking at the CT-scans, the researchers found canals in the dinosaurs’ heads with ‘thick nerve bundles that moved the eyeballs,’ according to the statement.

They also saw large air sacs that made up most of the braincase bones, in line with other tyrannosaurs.

‘These cavities within the bones not only make the huge skull lighter, but also are related to the middle region of the ear,’ Dr Ariana Paulina Carabajal, a dinosaur braincase expert in Argentina and study co-author, explained.

‘The cavities probably helped to amplify sound and assist the system that communicates to the left and right ears, allowing the brain to determine where a sound is coming from.’

The study has been published in the Canadian Journal of Earth Sciences.

In April, a study was published that suggested T. rex may have hunted in packs, similar to wolves, after researchers looked at a mass T. rex death site in Utah.

A separate group of researchers found that Tyrannosaur parents were ‘fat-footed’ after analyzing footprints in western Canada.

In June, researchers from the University of Maryland found that juvenile T. rex took over and wiped out other predators, suggesting they were dominant from an early age.

T.Rex just got even scarier! King of the dinosaurs may have hunted in PACKS just like wolves 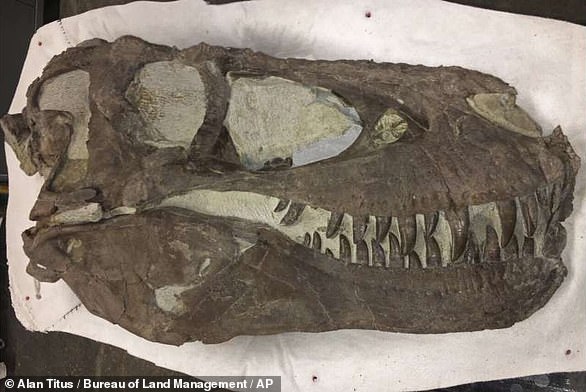 Pictured: the skill of a T.Rex found two miles north of the so-called ‘Rainbows and Unicorns quarry’ in the Grand Staircase-Escalante National Monument

Tyrannosaurus rex may not have been a solitary predator, but instead hunted its prey in packs, just like wolves, a 2021 study suggested.

Palaeontologists have been studying a T.Rex mass death site found back in 2014 in the so-called Rainbows and Unicorns quarry in the Grand Staircase-Escalante National Monument in southern Utah.

Analysis of T.Rex fossil bones revealed that members of the species died and were buried together.

The notion that tyrannosaurs might have been social carnivores was first mooted some two decades ago, when more than a dozen of the dinosaurs were found buried together at a dig site in Alberta, Canada.

A second mass grave site was subsequently found in Montana – and the Rainbows and Unicorns quarry assemblage makes for the third found to date.

‘I think that this site – the spectacular collection of tyrannosaurs but also the other assembled pieces of evidence – pushes us to the point where we can show some evidence for behaviour.’

Despite the mounting evidence, many experts have contested the idea, arguing that dinosaurs simply did not have the brainpower needed for complex social interaction.

Read more: T.Rex may have hunted in PACKS just like wolves, study reveals 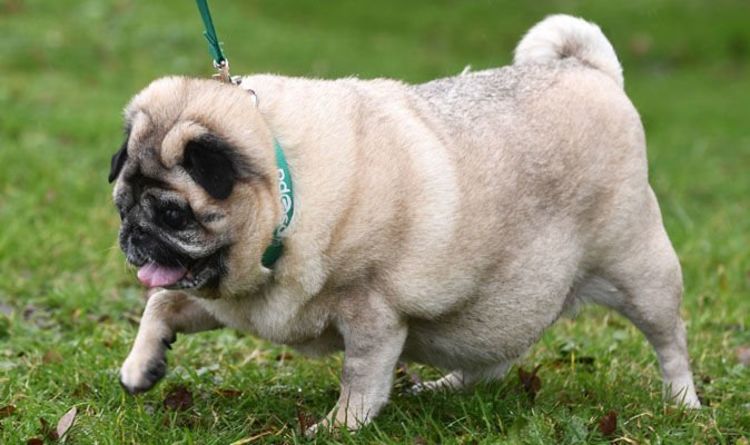 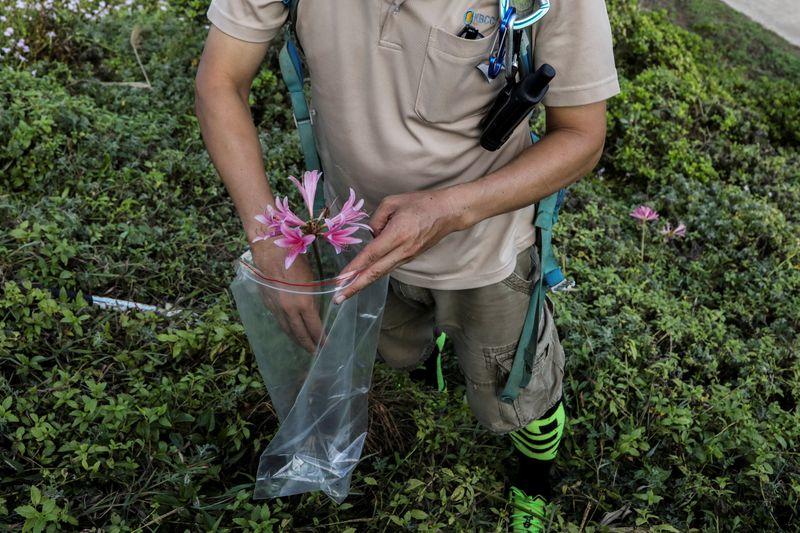 By Ann Wang TAITUNG, Taiwan (Reuters) – In the forests and on remote offshore islands of Taiwan, a group of conservationists are […] 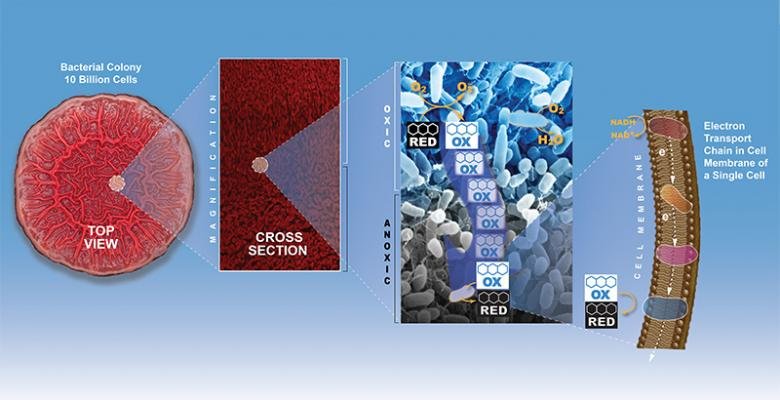 Biologists have revealed a mechanism by which bacterial cells in crowded, oxygen-deprived environments access oxygen for energy production, ensuring survival of the […]