A Panama-flagged oil tanker has been hijacked by armed men in the Gulf of Oman and ordered to sail to Iran. It is not clear who has seized the ship but analysts suspect Tehran of being involved. Iran’s Revolutionary Guards dismissed the reports as a pretext for “hostile action,” but it comes after anothore ship was attacked by a drone near Oman, killing two security guards – one British and the other Romanian.

Washington has vowed to lead a “collective response” against Iran in retaliation, in what many fear could lead to direct conflict.

A confidential report from the International Atomic Energy Agency (IAEA) suggested Iran had taken a “key step” that could help it develop a nuclear weapon.

Tehran informed the IAEA that the process was to develop fuel for a research reactor.

But uranium metal can also be used to make the core of a nuclear bomb.

The IAEA said in a statement: “Iran informed the agency that UO2 (uranium oxide) enriched up to 20 percent U-235 would be shipped to the R&D laboratory at the Fuel Fabrication Plant in Esfahan, where it would be converted to UF4 (uranium tetrafluoride) and then to uranium metal enriched to 20 percent U-235, before using it to manufacture the fuel.”

The Economist’s Middle East correspondent, Nicolas Pelham, claimed on Tuesday that Iran is now “enriching uranium beyond the levels required for civilian use and it is no longer co-operating with inspectors”.

It falls in line with other concerns raised by the international community.

In a joint statement with France and Germany, the Foreign Office announced: “Iran has no credible civilian need for uranium metal R&D and production, which are a key step in the development of a nuclear weapon.

“With its latest steps, Iran is threatening a successful outcome to the Vienna talks despite the progress achieved in six rounds of negotiations.”

US State Department spokesperson Ned Price said Washington found it “worrying” that Iran was continuing to violate the agreement “especially with experiments that have value for nuclear weapons research”.

European and US officials said the decision could potentially scupper recent negotiations to revive the 2015 nuclear deal abandoned by former US President Donald Trump.

The 2015 deal imposed curbs on Iran’s nuclear programme to make it harder for Tehran to develop fissile material for nuclear weapons in return for the lifting of economic sanctions.

Under the deal, Tehran agreed not to produce uranium metal or conduct research and development (R&D) on uranium metallurgy for 15 years.

But in December, Iran’s parliament passed a law requiring the government to bring the metallic uranium factory at the Isfahan Fuel Fabrication Plant online within five months.

They also called for the production of enriched uranium with a 20 percent concentration of the most suitable isotope for nuclear fission.

Uranium enriched to that level can be used in research reactors. Weapons-grade uranium is 90 percent enriched or more.

It comes after Iran swore in its new President, Ebrahim Raisi, on Tuesday.

Nicknamed “the Butcher of Tehran,” he immediately vowed to tackle “oppressive” US sanctions. 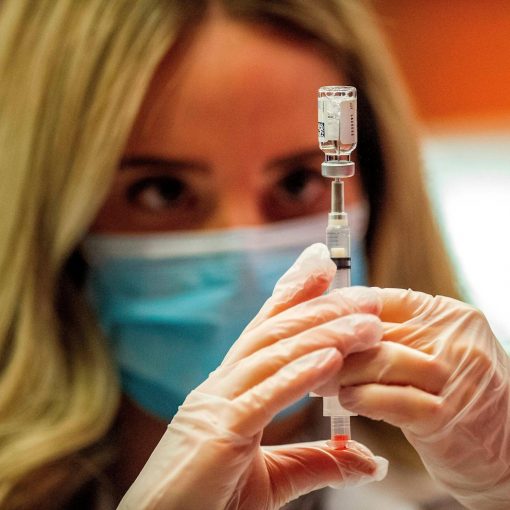 A pharmacist at the Hartford Hospital in Hartford, Connecticut, filling a syringe with the Johnson & Johnson COVID-19 vaccine. Joseph Prezioso/Getty Images […] When you look at it this way, the world seems odd to an algorithmLori Adamski Peek/Getty By Douglas Heaven TELLING a yellow […] Dr Chesley said: “For tracking asteroids, our data source are these telescopes that are constantly ploughing the skies, looking for objects, and […]