Belle Dingle (played by Eden Taylor Draper) has not been seen in Emmerdale for a while. But she is set to return and she will be there to help and support Liv Flaherty (Isobel Steele) as she continues on this dark and downward spiral further into alcoholism. Express.co.uk spoke to the actress who plays Mandy Dingle (Lisa Riley) about her character’s relationship with the troubled teenager and how her son, Vinny Dingle (Bradley Johnson) is also behaving about the whole situation.

Liv was there when Paul Ashdale (Reece Dinsdale) was trapped under the roof of the barn.

After fighting with the gambler moments before, she turned and walked away from Paul, saving herself seconds before the building exploded.

Since then, Liv has harboured immense guilt, feeling as if she should’ve at least attempted to help Paul out from the rubble.

In recent months, she has fallen into a dark place, turning to alcohol as a way of numbing the pain.

But as a recovering alcoholic, her relapse is a cause of concern for everyone around her.

READ MORE: Angel Adoree in tears over heartbreaking Make Do and Mend story

When Vinny found out what happened the day his father died, he was understandably extremely angry with Liv.

But over time he came to realise the difficult situation she was in – that was until she physically lashed out at him.

And when Mandy heard Liv had hurt her son, she was furious and banished her from their lives.

However, Liv is an honorary Dingle – she is Aaron Dingle’s (Danny Miller) half-sister – so the family can’t turn their backs on her altogether.

And it seems Belle will be the one to try and convince Liv she needs help and needs to stop drinking.

Speaking about Mandy and Liv’s fractured relationship, Lisa spoke about whether her character could ever forgive Liv: “This is our storyline moving forward.

“It’s coming across to everybody that because of Paul’s death, the burial everything, the finding out of the battery and the guilt, Mandy is coming across as like ‘well, if I can’t be happy no one else will be happy’.

“It’s not that,” she said. “It’s the fact that Mandy’s have the worst year of her life.

“And what’s happened is when the guilt was layered on top, she’s basically s doesn’t want Vinny to go through it and Vinny’s just being like this really naive teenager with the naffest of crushes known to man.

“Mandy being the control freak that she is, she’s trying to hold this joystick with Vinny,” she continued.

“But as we move forward you might see that this joystick is actually going to push him away.

Next week, Mandy is embroiled in a food fight with Nicola King (Nicola Wheeler).

It comes after Nicola learns about Jimmy King’s (Nick Miles) kiss with Mandy and declares their marriage officially over.

Despite living apart, the parents decide to hold off telling the children they’ve split up until after Angels birthday party.

And when Nicola spots Mandy at the party, she badmouths her to Rodney Blackstock (Patrick Mower), knowing full well Mandy can hear her.

When Nicola starts criticising Mandy’s parenting skills, the Dingle grabs the nearest object and hits over over the head.

Soon, the two women are brawling and birthday food is flying.

Instagram Ashley Hebert and J.P. Rosenbaum just said “I do” for a second time. After almost six years of marriage, The Bachelorette […] 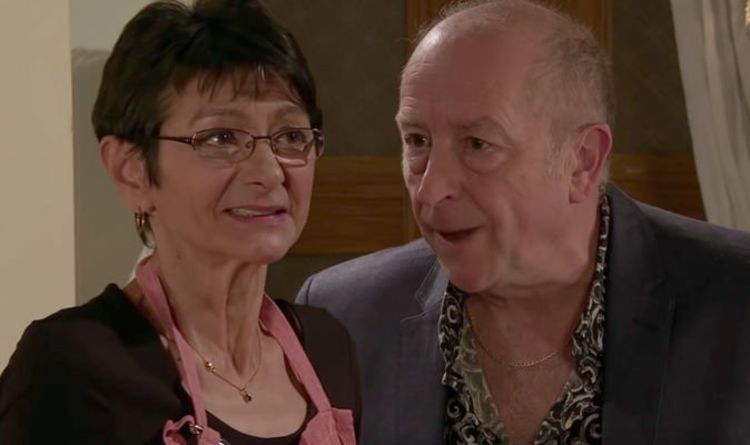 Shelley continued: “Historically I suppose, women have always been, I hate to say it, subjugated by men, because they have been the […]