‘It’s a pleasure to welcome Chancellor Merkel back to the White House, she’s been in the Oval Office many times, she’s a great friend, I consider her a personal friend as well as a great friend to the United States,’ Biden said as they were seated side-by-side in the Oval Office. ‘We saw each other at the G7 and then we saw each other again at the NATO meeting and today we’re talking about further advancing the strong U.S.-German relationship, which is strong and staying stronger.’

Merkel spoke through a translator and spoke about Germany’s ‘friendship with the United States of America.’

‘I’m more than aware of the contribution of America to a free and democratic Germany, so I’m very much looking forward to deepening relations yet again today,’ she said.

She said she and Biden would talk about Germany’s ‘immediate neighbors’ and also ‘political issues.’

The two leaders are expected to talk about a number of thorny issues including the Nord Stream 2 pipeline that links Germany to Russian gas. The United States is wary of the project, as the Kremlin has used energy dominance to exert pressure on neighbors in the past. 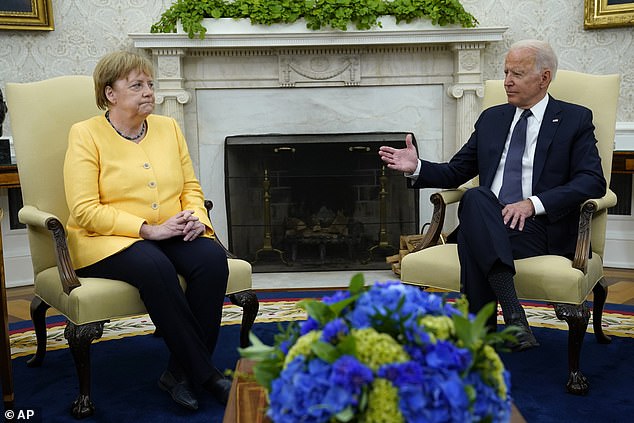 President Joe Biden (right) noted how German Chancellor Angela Merkel (left) has been a frequent guest to the Oval Office, having been Germany’s leader through four American administrations 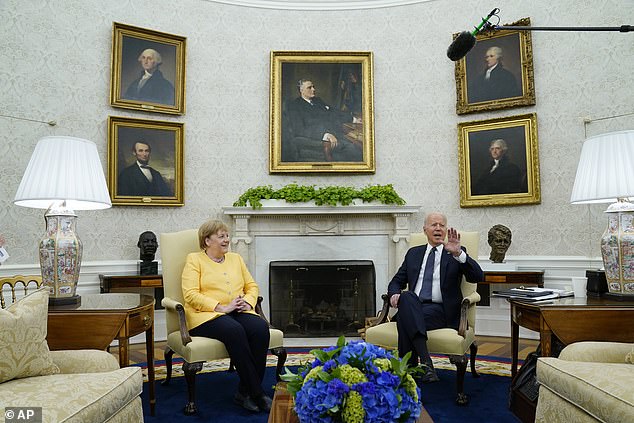 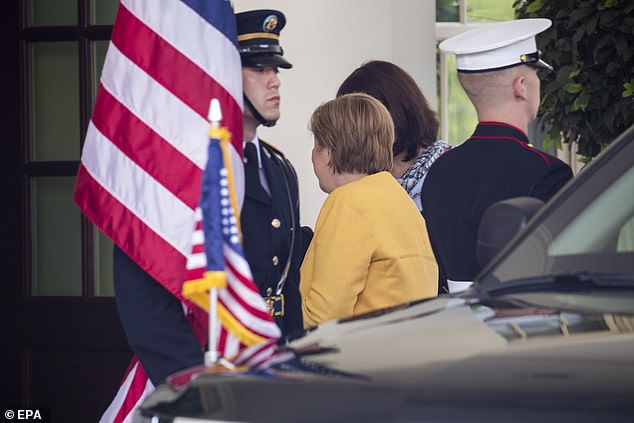 German Chancellor Angela Merkel is spotted arriving at the West Wing entrance to the White House Thursday afternoon for meetings, a press conference and dinner with President Joe Biden 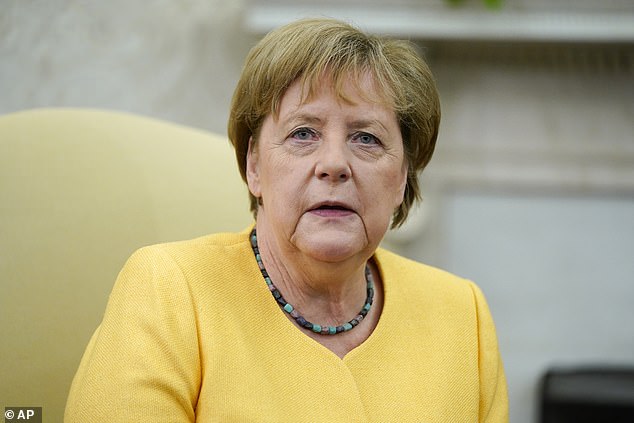 German Chancellor Angela Merkel isn’t running for another term and Germany’s election is in September, making it likely this will be her final White House trip as German leader

A senior White House official said in advance of Merkel’s trip that no formal announcement on the pipeline is expected to come from the talks.

Russian cyberattacks are also supposed to come up.

Merkel’s spokesman confirmed Wednesday, according to the Associated Press, that she and Biden will also talk about China.

The group Doctors without Borders also pressed Biden to push Merkel to change her position on vaccine patents, as Merkel, a scientist, is against lifting them.

On Thursday morning, there was a protest in front of the White House – complete with a large Merkel puppet – asking the leaders to ‘free the vaccine.’

A senior administration official also said on a call Wednesday that Biden and Merkel would also discuss climate change, COVID-19 generally, Afghanistan and shoring up democratic institutions around the world.

‘We are pleased to welcome you Madam Chancellor and I know we are the fourth administration that you have worked with throughout your extraordinary career. want to thank you for your years of leadership,’ Harris told Merkel outside the vice president’s residence. ‘I’m very proud that I believe that I am the first vice president to host you at the official residence of the vice president,’ Harris added.

The home at One Observatory Circle was under renovation when Harris was sworn-in in January, but she’s used it more recently to host a staff barbecue following reports of a toxic culture brewing at the VP’s office.

Business Insider published a follow-up story quoting former Harris aides as they reacted to Politico’s initial report that described, according to one source, the vice president’s office as an ‘abusive environment.’ 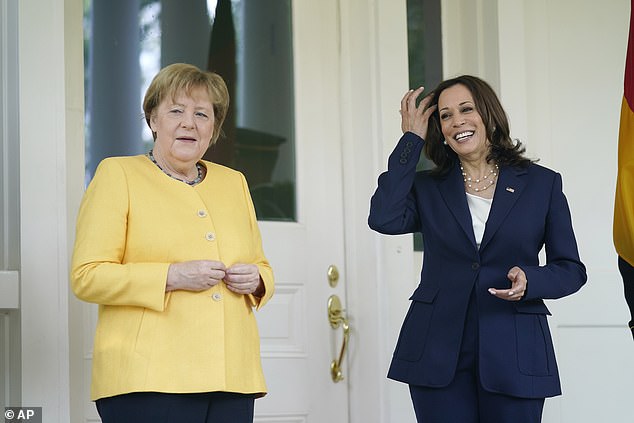 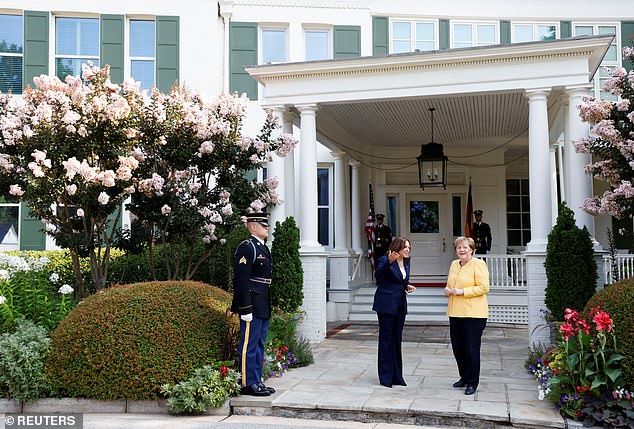 The working breakfast marked the first time Vice President Kamala Harris (left) has been able to host a world leader at the residence, which was under construction when Harris was sworn-in in January

She met with the delegation of Texas Democrats who fled the state earlier this week to stall a GOP-endorsed voting bill.

And, as the administration has done in the past, she’s played the role of greeter for a foreign leader visit, though at the beginning of her tenure she met with leaders virtually due to the pandemic and then at her ceremonnial office in the Eisenhower Executive Office Building, while the Naval Observatory residence was under renovation.

On Thursday morning, she and Merkel made brief welcoming remarks in front of the cameras.

‘I’m very honored to see you and I look forward to our conversation and it goes without saying that the relationship between our two countries is one founded on many shared values, including a commitment to democracy around the world,’ Harris said. ‘So, welcome, welcome.’ 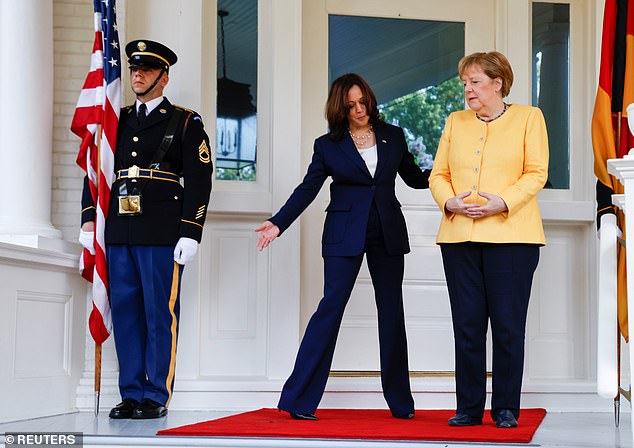 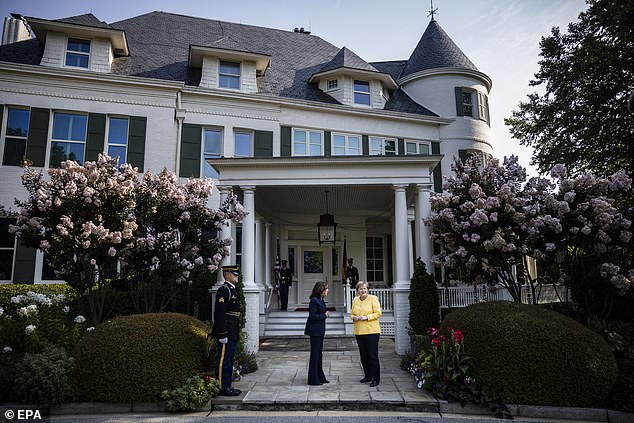 Through a translator Merkel responded, ‘I can only say that I’m delighted too for this opportunity here to meet the first Madam Vice President of the United States of America and I think that we can indeed cooperate very well in order to boost values.’

The menu consisted of a gruyère soufflé, served with an arugula salad, featuring herbs from the residence’s garden, along with fresh seasonal fruit.

Afterward a White House official said the two women had a ‘wide-ranging and very candid discussion.’

‘Topics crossed both domestic and international issues including current challenges, history between the two counties and future endeavors,’ the official said.

The German embassy in Washington tweeted a photo of the two female leaders meeting simply labeling it, ‘History.’

Merkel’s visit to the White House marks what’s likely her last trip to the U.S. as the German leader with elections coming in September.

Merkel is not seeking another term.

Biden will host the chancellor for a private dinner Thursday night at the White House.

The Biden administration hasn’t yet hosted an official state dinner.

During her time in the United States, Merkel was also presented with an honorary doctorate, her 18th, from Johns Hopkins University and spoke at its School of Advanced International Studies. 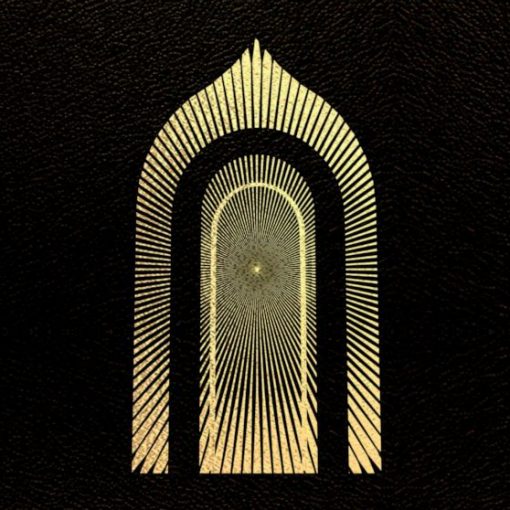 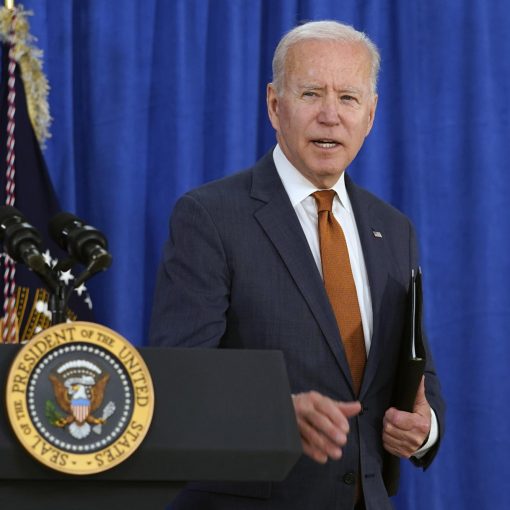 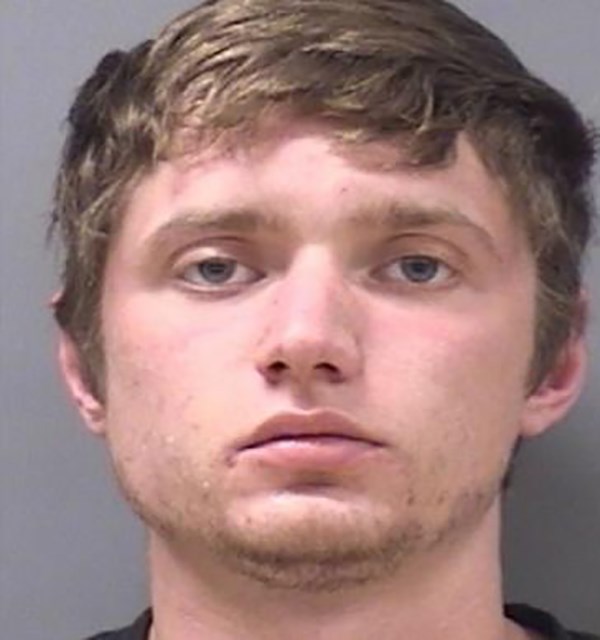 Mena Suvari is officially a mom.  The American Beauty actress confirmed to People that she had welcomed her first child with her husband Michael Hope earlier this month. […]