England comprehensively brushed aside Ukraine to reach the Euro 2020 semi-final and set up a date with Denmark.

Sportsmail’s SAMI MOKBEL rates the performance of every player who featured from both teams in Saturday evening’s quarter-final. 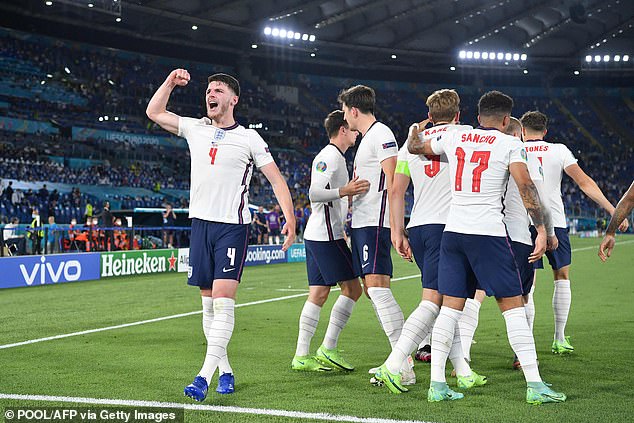 Jordan Pickford – Wouldn’t have been expecting the busiest night but he still produced an excellent save to deny Yarmenchuk in the first half to spare Walker’s blushes. Still to concede a goal in the tournament. 7

Kyle Walker – Back in his preferred spot at right-back but he didn’t look entirely comfortable. One poor pass led to a decent Ukraine opportunity while the Manchester City man lost his man on more than one occasion. 6.5

John Stones – The unsung hero of England’s tournament so far. Has quietly gone about his business in the heart of the defence with minimal fuss. In the stifling heat, this performance was as cool as they come. 7.5

Harry Maguire – Where is he finding the energy from? This his third game in 10 days after nearly seven weeks out with injury. A truly super-human effort from the Manchester United skipper. 8

Luke Shaw – Coming of age in an England shirt. The left-back was excellent again, strong in defence and supplemented his team in attack with flair, quality…and two brilliant assists. MOM. 9 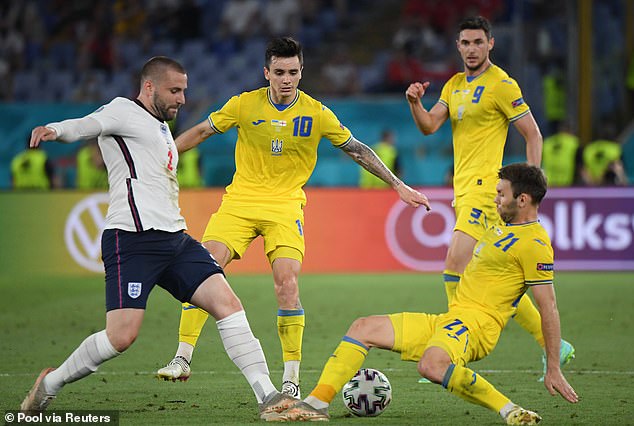 Kalvin Phillips – Didn’t see much of the ball but his energy in central midfield was key for England. Knew he couldn’t come steaming out of the box due to the weather but showed maturity in tough conditions. 7.5

Declan Rice – Doesn’t get the credit he deserves for his efficiency in possession, hardly mis-placed a pass all night before he was substituted early with Wednesday’s substitution in mind. 7.5

Jadon Sancho – Started slowly on the biggest night of his international career but eventually grew into the game. His trickery and pace clearly terrified Ukraine’s defence. Should have scored in the first half, though. 7

Mason Mount – Straight back in the team after his Covid-related absence. Didn’t seen as much of the ball as he’d have liked but still created Jordan Henderson’s watched goal. Showed maturity way beyond his years. 7.5

Raheem Sterling – Reinforced his position as England’s star of the tournament. The Ukrainians were petrified of him – and no wonder. Unlocked the opposition brilliantly to set-up the opener. 8.5

Harry Kane – Three goals in two for the England captain… and to think some were calling for him to be dropped. The striker is peaking just when his country needs him to. 9 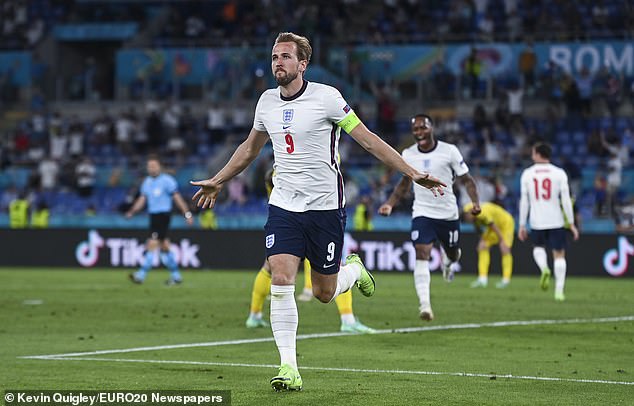 Gareth Southgate: Everything he touches turns to gold. He warned his players of complacency and they heeded his words. His team are two games from glory – but this tournament should be viewed as a success regardless. 8.5

Georgiy Bushchan – Having conceded six goals prior to last night, the Dynamo Kiev shot-stopper wouldn’t have been full of confidence. He certainly won’t be after this. 5

Illia Zabarnyi – Was frightened to death by Sterling and wasn’t helped by the fact Shaw was a willing runner forward down England’s left hand side. Tried admirably but had no answer. 5

Serhiy Kryvtsov – Was caught cold by England’s rapid start and some lax passing out from defence put his team under unnecessary pressure. Lost Kane for England’s opener, too. Hobbled off with an injury. 5

Oleksandr Karavaev – It was abundantly clear from the opening few minutes that he would struggle to cope with Sterling’s brilliance. Looked like a rabbit caught in the headlights. 5.5

Serhiy Sydorchuk – Played a key role in steadying the Ukrainians after their nightmare start to proceedings. Looked cool and efficient in possession and offered his defence protection. 6.5 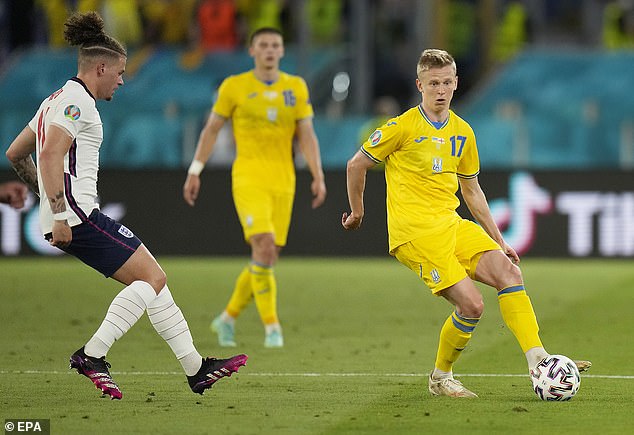 Oleksandr Zinchenko – The Manchester City left-back was utilised in central midfield but was no real match for Rice and Phillips in the engine room. Showed flashes of his quality but not enough. 6.5

Vitaliy Mykolenko – Handed the task of taming Sancho and did a decent job of keeping the Borussia Dortmund winger’s impact to a minimum. Joined in attack when it was safe to do so, too. 6.5

Roman Yarmenchuk – Squandered a good opportunity to level for Ukraine after Walker’s mistake but was thwarted by Pickford. Caused England problems with his strong running down the channels. 6

Mykola Shaparenko – Half-baked tracking of Sterling led to England taking the lead. In the team for his attacking quality but had little opportunity to showcase his talent as England kept him quiet. 5.5

Andriy Yarmolenko – Was the man England most feared heading into the game but England’s defence did well to neutralise the West Ham forward’s threat. 5.5 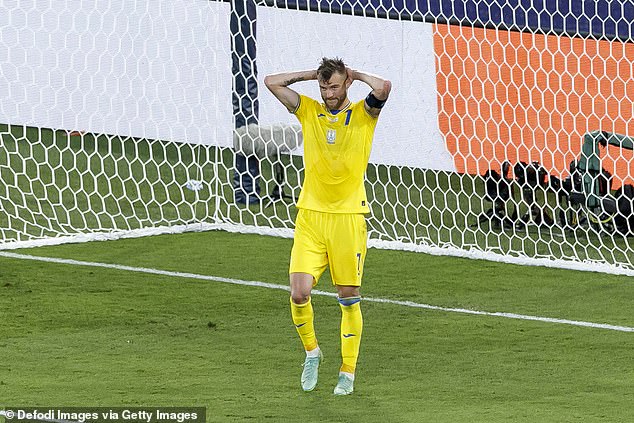 Andriy Shevchenko: Would have been happy with the way his team responded after going behind but by the end they couldn’t wait to get off the pitch as England pummelled them. 5.5

Referee: Felix Brych (GER) – Kept a lid on proceedings, but in reality the game never really threaten to spill over – particularly after England killed the game early in the second half. 6.5 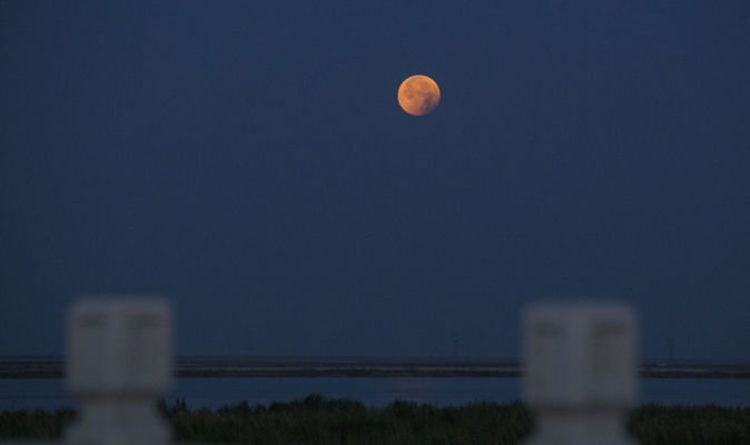 “You eat alone, you choke.” During the years of plenty it became a habit to compare the Premier League’s wielding of power […] 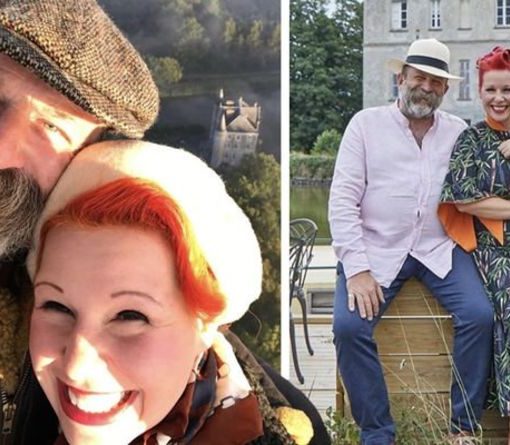 Escape to the Chateau fans rejoice! The popular Channel 4 show which initially began by following Dick and Angel Strawbridge trade their […] 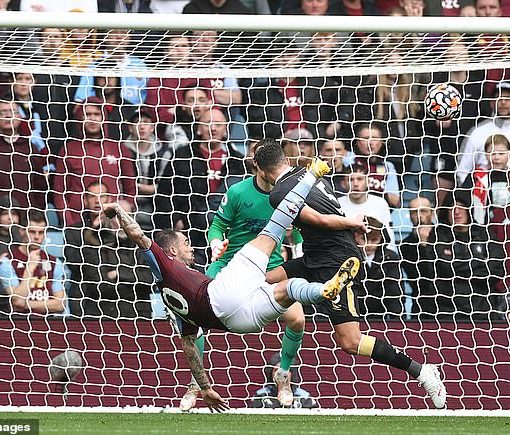 When Danny Ings scored with a scissor kick on his home debut for Aston Villa two weeks ago, analysis of his effort sparked […]