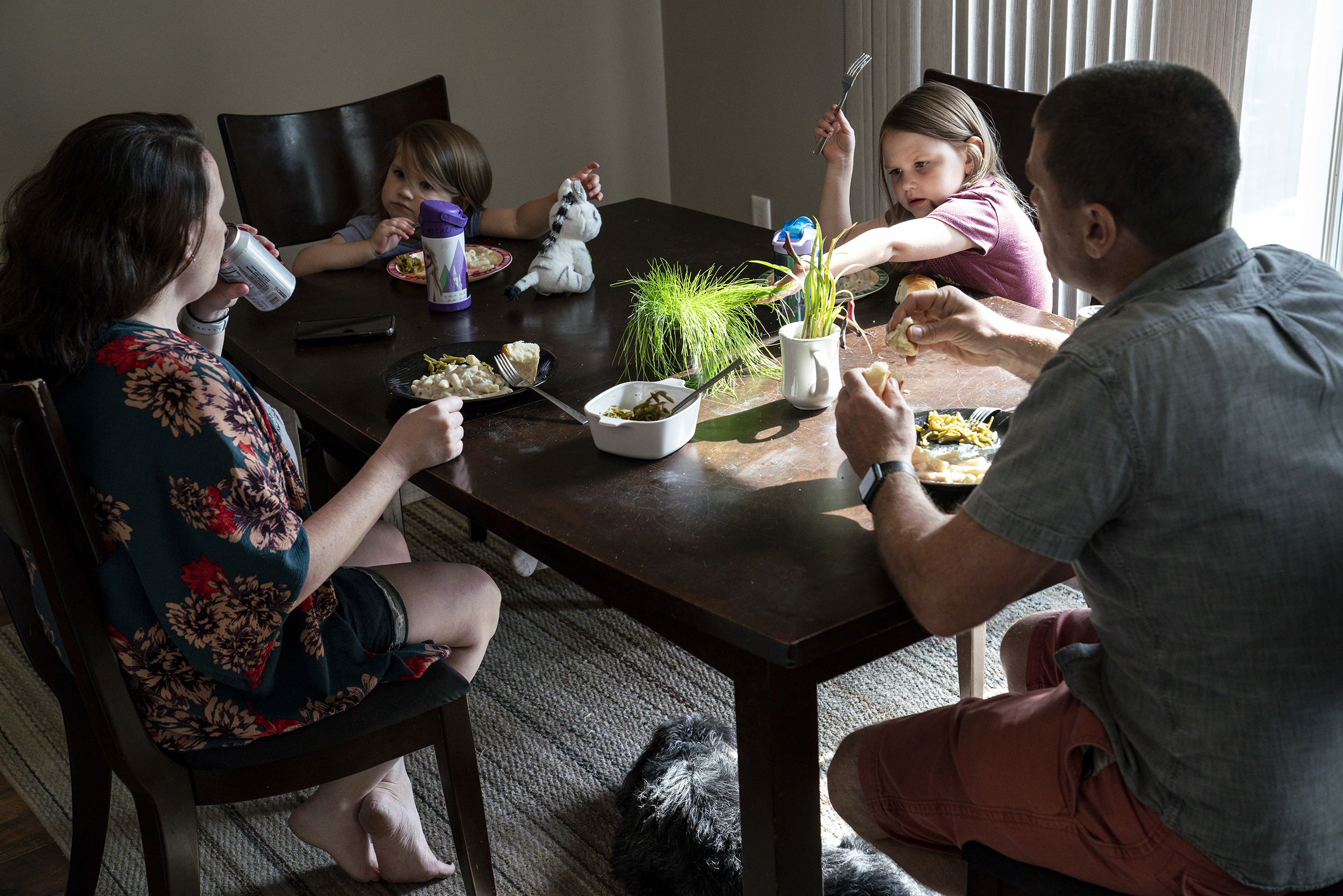 The weather was beautiful, there was no remote school to log onto, and Annie Whitlock’s puppy was darting around the living room, eager as ever to go outside. But no one in Whitlock’s family was budging.

Whitlock, her husband and their two kids had already had a busy weekend of seeing relatives. It was the morning of Memorial Day, and Whitlock’s 3-year-old, McKenzie, had no desire to get out of her pajamas. As Whitlock began to argue with her, she realized something. Relaxing at home, something she normally would have guilted herself out of, sounded nice.

“I was thinking, ‘Why am I fighting this?’” Whitlock, 40, an associate professor of education at the University of Michigan-Flint who lives in Davisburg, Michigan, said. “We were all tired. I was not going to do the ‘mom guilt’ thing that day. Get dressed if you want to get dressed. Eat snacks. It’s fine.”

More than a year into the pandemic, the way we parent has changed, with mothers, in particular, saying they are allowing their kids — and themselves — a break from the busy schedules they once embraced.

Many are allowing their children more screen time, feeling less pressure to make elaborate home-cooked meals and re-evaluating whether the parenting expectations they had created for themselves were ever attainable.

“Before the pandemic, I often questioned my mothering. I often thought, ‘Am I a good mom? Are these other moms doing the same thing as me?’” said Rachel Nix, 34, of Lemoore, California, who has four kids, ages 3 to 12, and is the host of a parenting podcast called “Shhh! My Kids Are Asleep.” “It was very stressful.”

The coronavirus helped her prioritize what is important to her, and its disruptions to child care exhausted her.

The result: Nix orders takeout more frequently for dinner, cares less about the kids getting dirty when they play outside and is more willing to occasionally give them a tablet to play with so she can get a 20-minute break. And she doesn’t feel bad about it.

“They’re still going to love me, possibly even more, if I’m not the perfect parent,” she said.

Will ‘intensive parenting’ get less intense?

For many, achieving perfection as a parent has long meant curating every minute of their children’s days.

The pandemic came at a time when “intensive parenting” had become the norm, said Patrick Ishizuka, an assistant professor of sociology at Washington University at St. Louis, whose research focuses on social inequality in the intersection of work and family.

This child-rearing approach, he says, involves devoting as much time and money to your child as possible, providing enriching experiences for them while they play, advocating for them in school and enrolling them in lots of extracurriculars.

While it was once assumed that this parenting style was limited to those with the resources to make it happen, Ishizuka’s research has found that there is support for this approach across class lines.

Besides shuttering many of the after-school activities that parents once shuttled their kids to, the pandemic made it more difficult for parents to be as participatory in every aspect of their children’s lives — especially if they were juggling work with no child care.

And the burden of caring for kids more often fell on moms, who disproportionately left or were forced out of the workforce to make up for the loss of child care.

Yet the pandemic came at a time when there are more female breadwinners than ever in heterosexual couples, and could have been an opportunity for fathers to take on just as much of the burden of remote learning, experts said.

“I think there had been kind of a naïve hope and expectation that working from home would relieve the inequality in parenting,” said Kathleen Gerson, a professor of sociology at New York University who studies the intersection of gender, work and families.

Her preliminary research shows that unlike female caregivers, male caregivers did not cut down their work hours or leave the workplace as much during the pandemic. If anything, men felt more pressure to prove their commitment to their employers when they were not on-site, she said.

That did not mean that fathers were immune from the stress that mothers felt. In a survey released in March by the American Psychological Association, 47 percent of mothers with children who were still at home for remote learning reported that their mental health had worsened, and 30 percent of fathers who still had children home said the same.

But the pandemic highlighted inequalities in parenting, especially for families with two working parents, Gerson said.

“Women, and mothers in particular, are angry,” she said. “What the pandemic has revealed is this is not about having it all. This is about needing to do it all, and not simply for one’s own personal gratification, but because other people depended on you — not just for the care you give them, but for the income you bring them and for the basic foundation of family survival.”

“What the pandemic has revealed is this is not about having it all. This is about needing to do it all, and not simply for one’s own personal gratification, but because other people depended on you.”

It was even harder in one-parent households. Amy Lane, 47, of Elsmere, Delaware, is a single mom to an 11-year-old, Talula, who has been doing remote learning since March 2020. Lane lost her job as a server at a restaurant when the pandemic hit and now is unsure whether she will be able to afford summer camp for Talula.

The pandemic, she said, has forced her to be more frank with her daughter.

“It’s made me not be so quick to have the answers, because we don’t. Not that I ever did, but as a mother, you try to be confident so your child is secure. But I just don’t anymore,” she said.

The pandemic has also influenced how mothers of children who are not yet school-aged are raising their kids.

Victoria Ernst, 26, a stay-at-home mom to a 3- and 1-year-old in San Antonio, said she became “harsher” with her children as her husband worked remotely from their small home and the stress of the pandemic began affecting both of them.

“Before, I was all about gentle parenting,” she said. “But now, I notice myself snapping a lot more than I used to, and in general, having a short fuse and not having patience for things that used to not set me off.”

Haley Barrett, 27, of Phoenix, became a mother two weeks after the coronavirus was declared a pandemic, and said she is parenting her 14-month-old daughter, Cora, differently than she expected.

She did not plan to allow screen time until Cora turned 2, but without any breaks — Barrett has only just started seeing family members now that she is vaccinated but is still hesitant to leave Cora with a babysitter — she has found herself putting cartoons on just to get dishes done.

“The world is totally unrecognizable right now,” she said. “That mental exhaustion on top of the physical exhaustion is a lot to handle, especially as a new parent.”

How to make motherhood less stressful

There are ways to make this stressful time easier, said Lynn Bufka, senior director of practice transformation and quality at the American Psychological Association.

Encourage autonomy in your kids, she said. Depending on their age, that might mean having them do laundry, or help loading the dishwasher.

“I hope this pause will help us recognize who our kids are and help us to parent toward our individual kids and what they want and need, not what the larger world around us tells us what our kids should be striving for.”

She stressed the importance of exercise for mental health, and said if you can’t find time to exercise alone, do 30 minutes of activity with your kids, perhaps in the form of a dance party or running around outside.

She also said to make sure you have sources of joy incorporated into your routine. That might be watching reruns, lying in the grass and feeling the sun on your face, or looking at the stars.

Going forward, Bufka said she hoped moms would put less pressure on themselves.

“I hope this pause will help us recognize who our kids are and help us to parent toward our individual kids and what they want and need, not what the larger world around us tells us what our kids should be striving for,” she said.

For Whitlock, the Michigan mom, the pandemic has helped her appreciate moments she took for granted before, like being able to get together with her daughters’ grandparents.

And despite her constant state of exhaustion, she has more confidence in her abilities as a mother.

“I have learned that I can pretty much parent through anything, so I don’t need to get freaked out if a routine gets disrupted post-pandemic,” she said. “We’ve rolled with worse.” 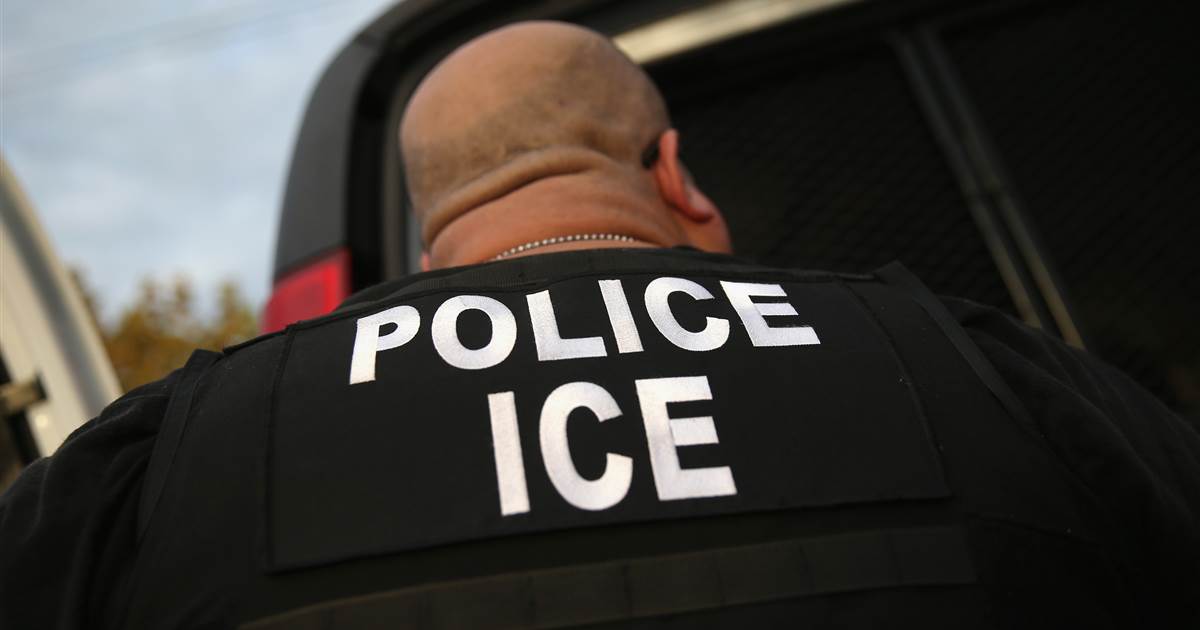 Tith Ton, who came to the U.S. legally with refugee status, has served roughly 22 years of a life sentence for the […] 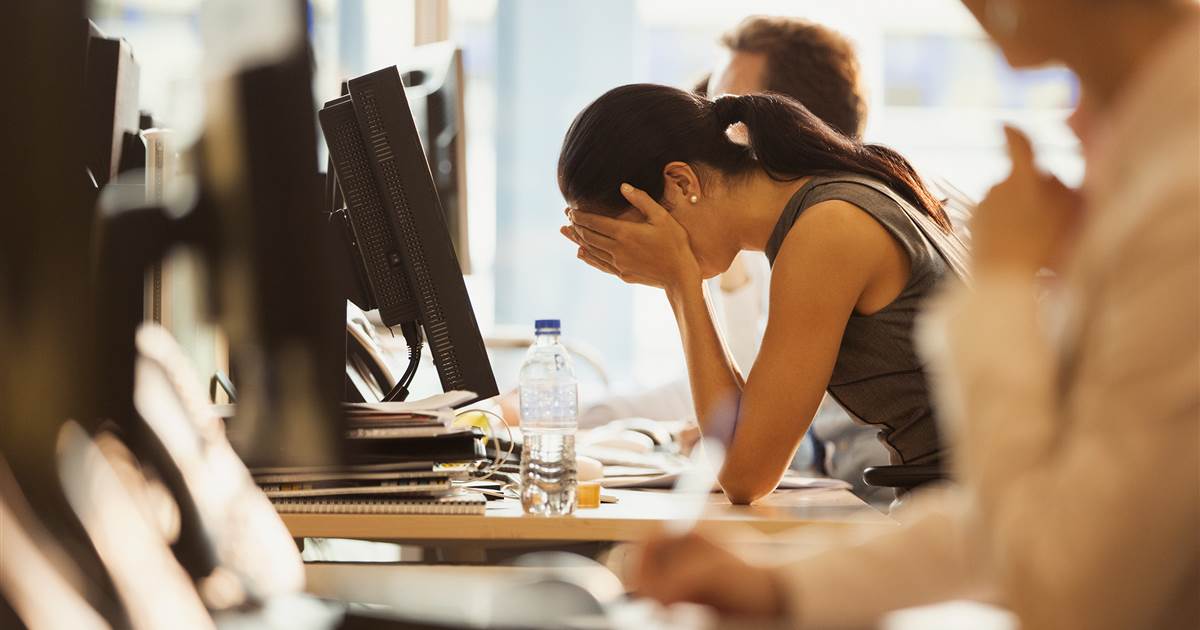 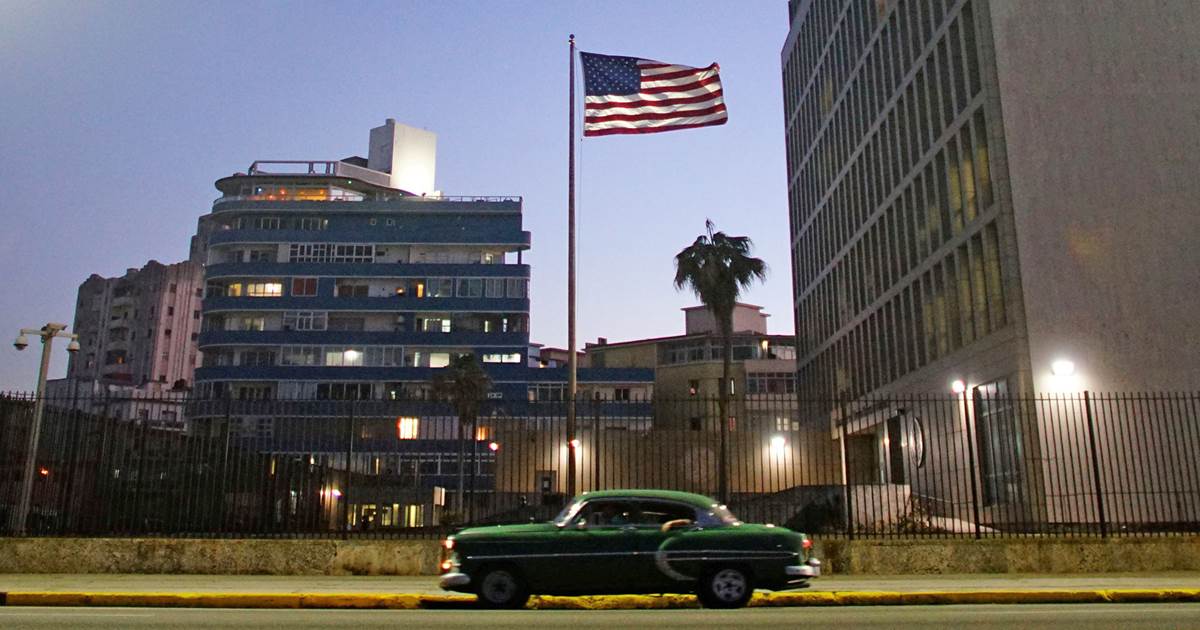 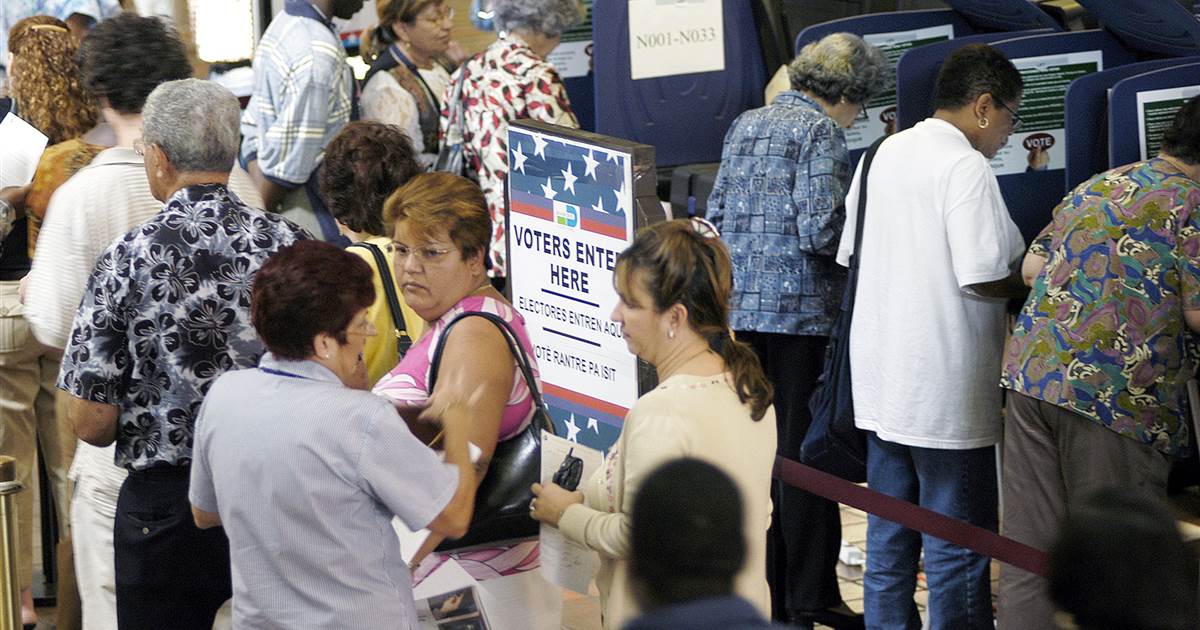