Newsmax host Grant Stinchfield claimed that Nickelodeon has ‘gone off the deep end’ with its ‘transgender indoctrination’ after the children’s channel aired a music video performed by a drag queen in honor of Pride Month.

Over the course of two minutes and 30 seconds, West explains the meaning behind the colors of the rainbow and urges children to be proud of who they are.

‘Red means life because living is a gift. Orange means healing and we have to persist in working to heal the world and healing ourselves,’ West sings amid animations of children holding hands and rainbow flags waving high.

Before showing a clip of the music video, Stinchfield, who hosts an eponymous daily show on the conservative Newsmax, warns his guests that he’s about to show them a ‘doozy.’

‘Not that I have anything against gay people, whatever it may be, but their transgender indoctrination of kids is just out of left field,’ he says.

‘Do you understand the amount of questions parents are going to get after that?’ 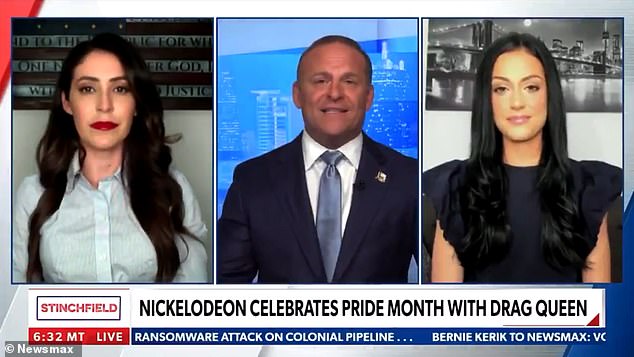 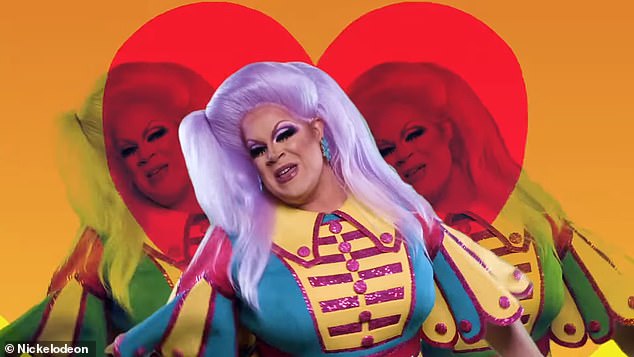 West, 42, was born Andrew Levitt. He came to prominence on season 11 of RuPaul’s Drag Race

Guest Isabella Riley dug in even further, saying Nickelodeon may have had ‘sinister motives.’

‘Like you said, I don’t have a problem with gay people. I don’t care about transgender people. My problem is that you’re shoving it down everyone’s throats, and I reject any pride month that is just celebrating identity politics,’ she said.

She went on to call the video ‘creepy,’ saying it makes her ‘never want to have kids.’

‘I don’t want to bring them into a world where this is being pushed on them, and it’s scary, including critical race theory in public schools,’ she continued, bringing up another lightning rod topic that has become a rallying cry for conservatives across the country.

Pride Month, which commemorates the June 28, 1969 Stonewall Riots credited with kickstarting the modern gay rights movement, is celebrated in June in the United States. 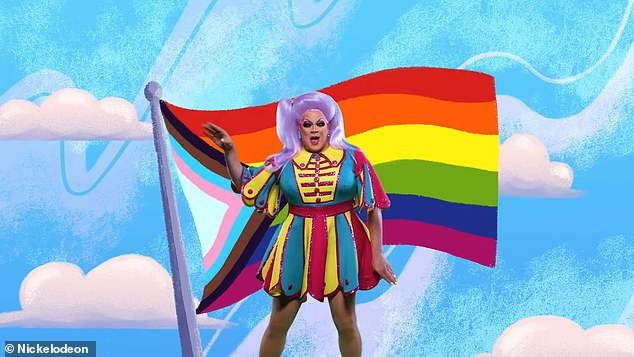 In the two minute and thirty second music video, drag queen Nina West urges children to be proud of who they are

The Newsmax segment was posted on Twitter by Jason Campbell, a researcher with Media Matters, an organization that bills itself as ‘the nation’s premier progressive media watchdog.’

Campbell’s followers were outraged by the Newsmax segment.

‘It’s an educational tool being discussed by people incapable of being educated,’ another user said.

In May, Stinchfield joined The Morning Answer, a show broadcast in AM radio throughout Southern California.

‘My goal is to simply strengthen the tireless fight AM 870 and AM 590 is already waging against the enemies of freedom, capitalism and democracy,’ he said in a statement at the time.

This isn’t the first time Stinchfield has found himself in hot water.

Last month, he came under fire for referring to Israel as the ‘home country’ of American Jews.

He was replaced with another host for a couple of days, but Newsmax told Business Insider this was due to a ‘vacation that was planned a while ago.’

‘Do you understand the amount of questions parents are going to get after that?’ Stinchfield asked

Guest Isabella Riley called the video ‘creepy,’ saying it makes her ‘never want to have kids’

Last month, Stinchfield came under fire for calling Israel the ‘home country’ of American Jews. He did not appear on his own show for the rest of the week after that 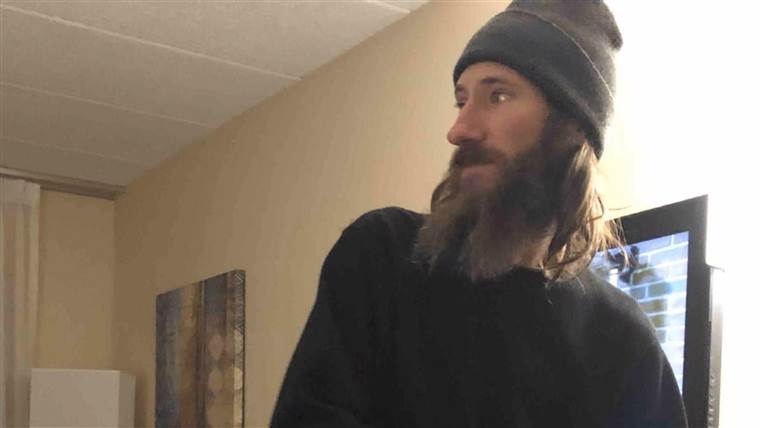 Get breaking news alerts and special reports. The news and stories that matter, delivered weekday mornings. SUBSCRIBE Just a few months ago, […] 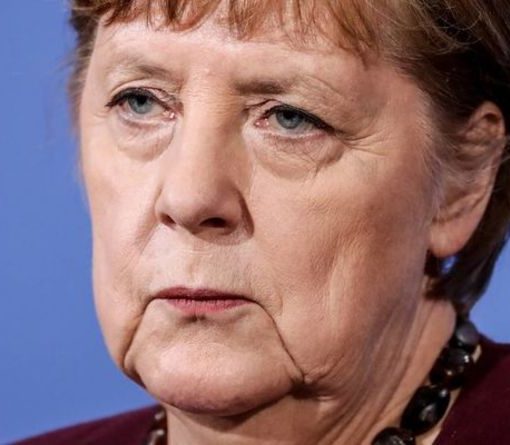 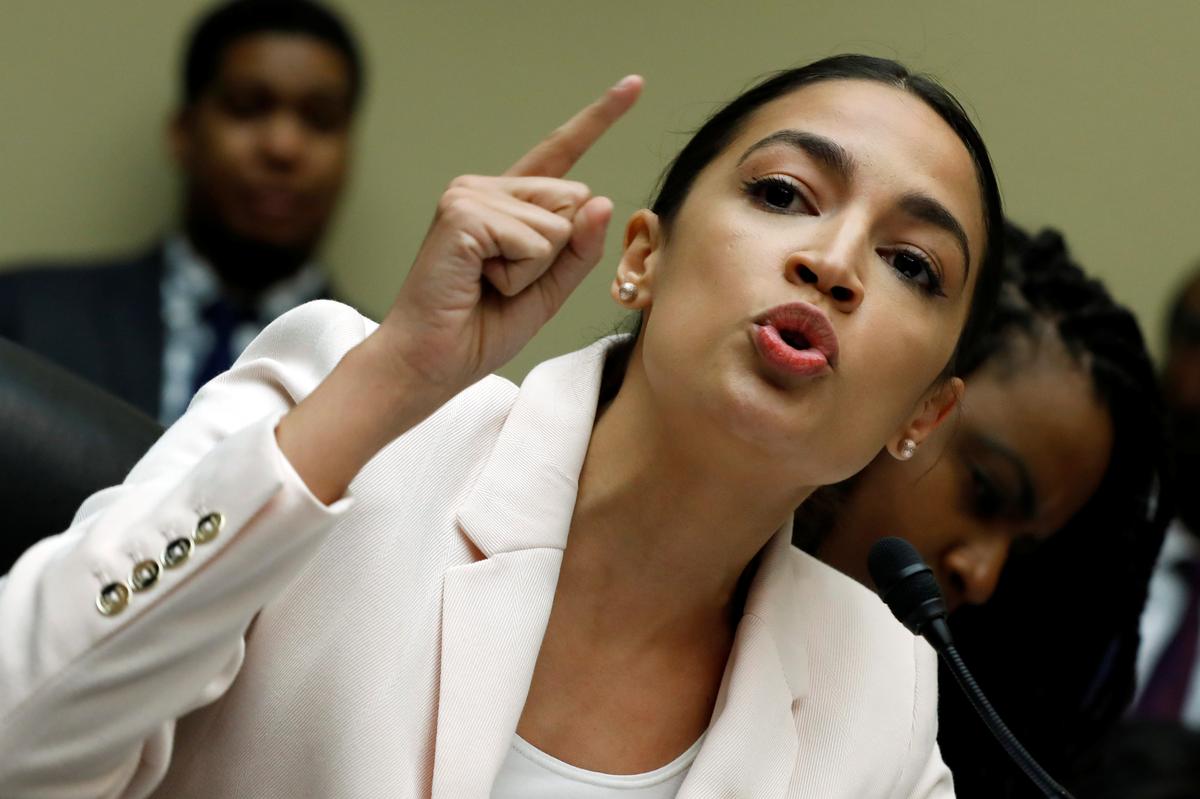 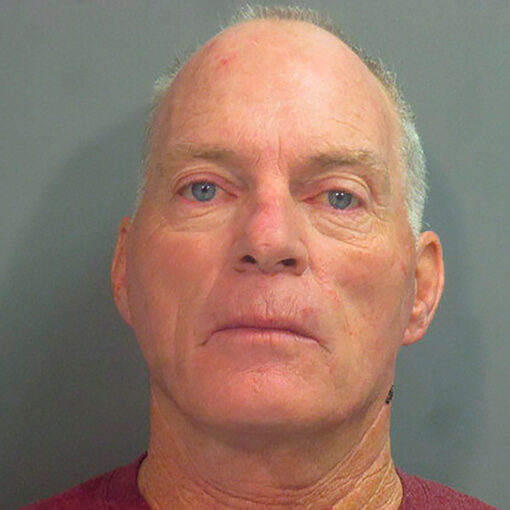