Enjoying a summer holiday in Iceland is not quite the same as it is on the beaches of the Med. Let me give you an example.

When Icelanders arrive at an office building and see ‘SOLARFRI’ posted at reception, they need no further explanation.

The word means ‘when staff get an unexpected afternoon off to avail themselves of good weather’. The employees have simply decided not to work any more that day because it’s sunny. 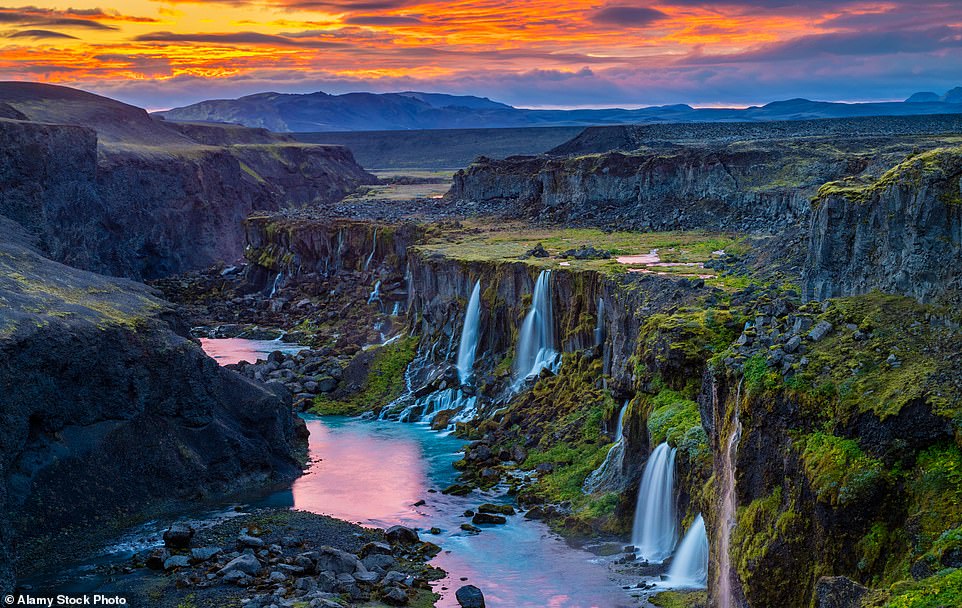 Raw natural beauty: A stunning shot of the gaping Sigoldugljufur canyon in the southern region of Iceland 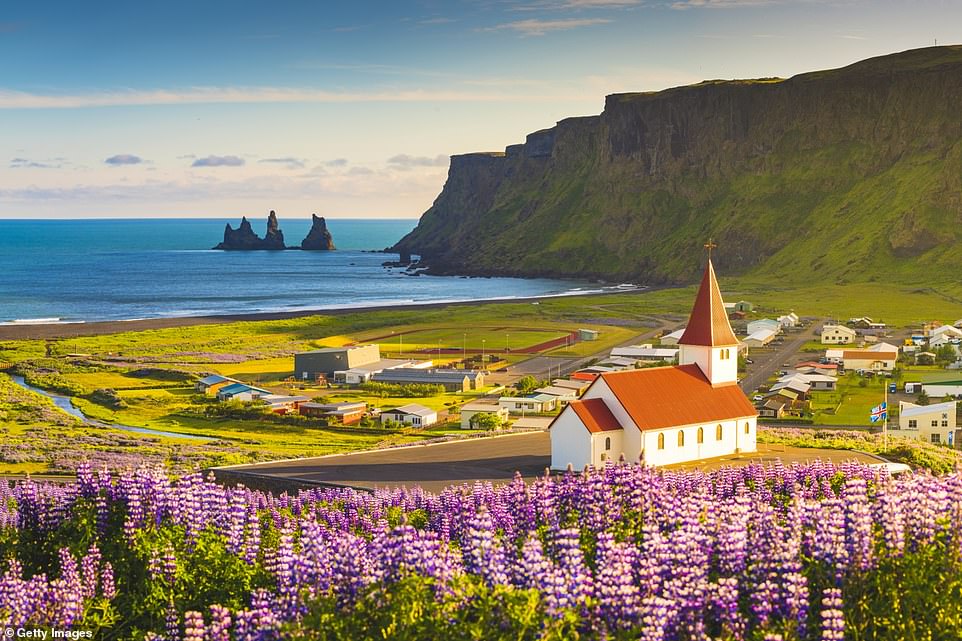 Iceland awaits: Lupin fields in bloom by the remote coastal village of Vik i Myrdal in southern Iceland

Iceland may be the land of bright summer nights but that is about as far as certainty goes in the season some people refer to as ‘low-winter’.

To enjoy summer at latitude 65° necessitates a degree of making it up as you go along. Although the country is now welcoming back those who are vaccinated against or have recovered from Covid-19, with the need for just one PCR test on arrival, those seeking a ‘green list’ summer getaway in Iceland will, it is fair to say, require a little readjustment if they are accustomed to the Costa del Sol. Iceland being a remote island in the North Atlantic, the weather can change notoriously fast.

Sudden high winds are common. If you hire a car, however, I have a tip: east Iceland is home to Hallormsstaður National Forest, where the trees — mostly birches — provide a natural wind shelter. ‘It feels a bit like going abroad,’ says forest manager Thor Thorfinnsson.

Eighty per cent of guests in the area are locals. In most places the opposite is true — in a normal year, at least — as Iceland is visited annually by two million tourists, which is six times the island’s native population. Most of these visitors are going to the lively capital, Reykjavik, to wallow in the geothermal waters thereabouts, or taking a drive to see the volcanoes. I was born in smalltown Iceland in the 1980s and I’m likely to die here somewhere, in the middle of the North Atlantic. 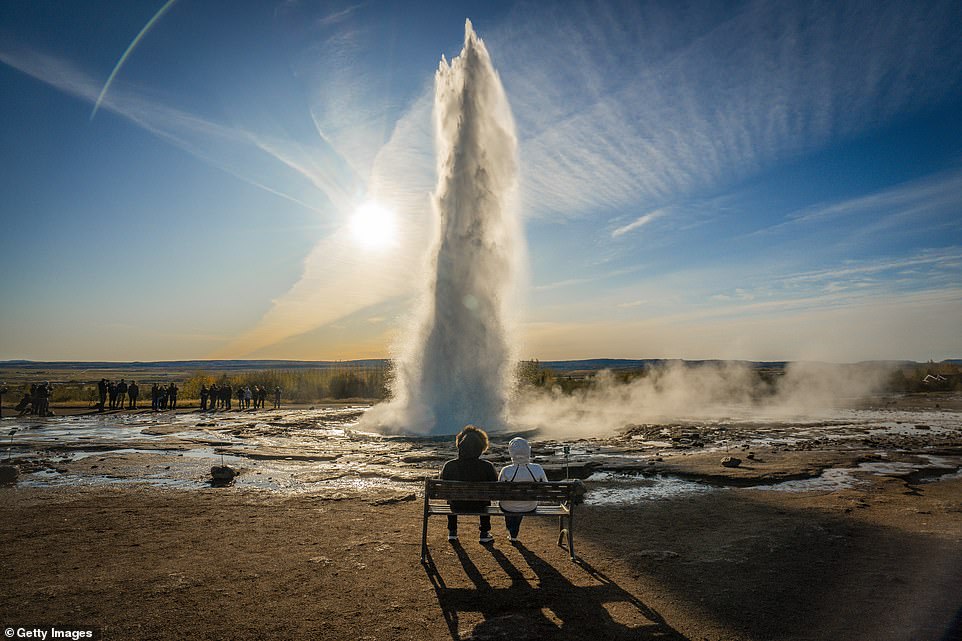 A highlight for many visitors to Iceland is Strokkur. The geyser blows around 65ft (20m) every five to ten minutes 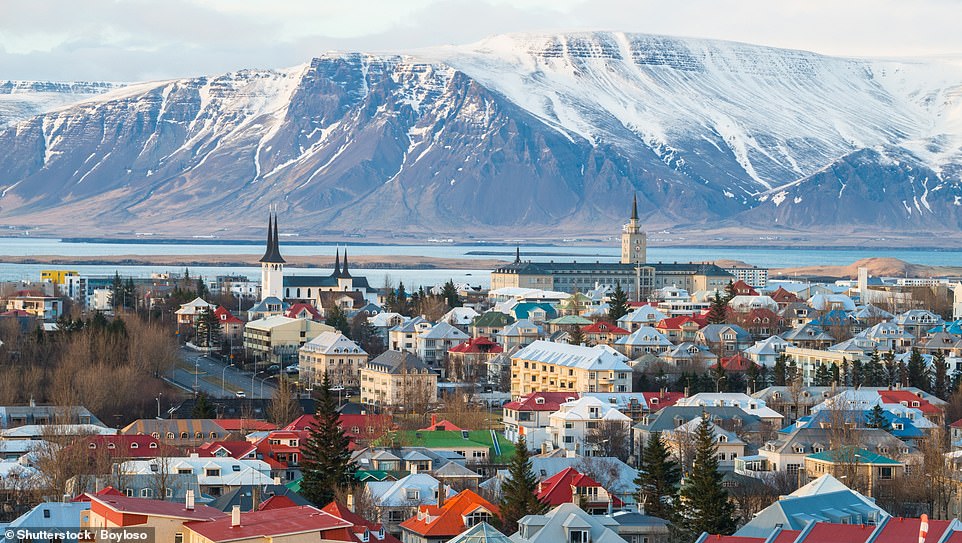 A shot of Iceland’s lively capital, Reykjavik, during the late winter season with snow dusting the mountains beyond

For two years I lived in California, a place where fruits taste fresh and the dating scene doesn’t involve any risk of kissing a fourth cousin; where the beaches are yellow and warm, not black, with violent waves. But the raw, extreme elements of Icelandic life eventually pulled me back.

I missed living in a country where the levels of fish stock can cause the economy to boom, or bust, in a single season. The average household puts up its Christmas lights in October to compensate for the lack of light. Ski resorts shut down because of ‘too much snow’.

Everything is fleeting, so you may as well just enjoy the moment. My fatalism has its limits: I love nothing more than a pleasant, pre-planned barbecue party with lamb ribs and rhubarb pie. But when the wind hits, it’s an opportunity to go sailing.

Vaccinated travellers from abroad will certainly receive a warm welcome this summer. With Icelandic infection rates among the lowest in Europe, bars, cafes, attractions and restaurants are open and waiting for you to come

The darkest days of winter? A good time to finish that book. Being Icelandic means belonging to a small club. Each individual is important by default and every victory is a shared success. I remember the exact moment when Iceland scored their second goal to knock England out of the Euro 2016 football competition: I was on a ship, listening on the radio and hearing my town cheering even though we were a mile away from the harbour. It creates a strange sense of self.

I once heard a story about an Icelandic lorry driver who was assigned to shuttle some foreign royalty around for a day. When the delegation stopped for lunch, the driver entered the restaurant, grabbed the seat next to his travel companion — the foreign king — and began eating with his fork in his right hand. As one does.

Tourists want to see waterfalls, take pictures of the tallest geyser (Strokkur), taste shockingly gross food (including fermented shark, which most locals stopped eating with the arrival of the refrigerator) and go trekking in the desolate interior, where the landscape is shaped by lava flows.

Nothing wrong with any of that — and vaccinated travellers from abroad will certainly receive a warm welcome this summer. With Icelandic infection rates among the lowest in Europe, bars, cafes, attractions and restaurants are open and waiting for you to come.

New flights are even being arranged. There will be scheduled flights from all London airports this month, with those from the new budget airline Play departing from Stansted. But there is another side to the country, for those interested in finding out more about what makes us tick. 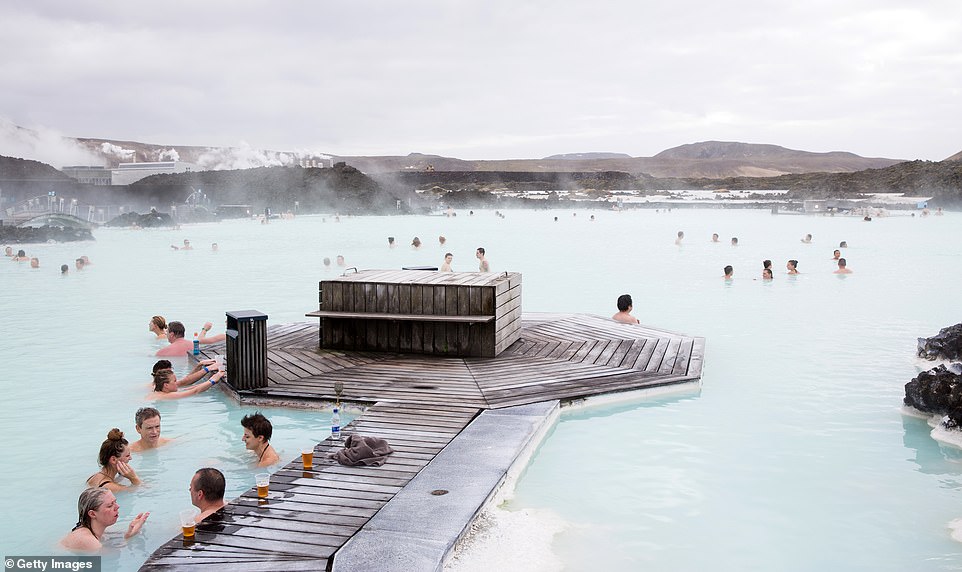 For a long time, the Blue Lagoon was the only place where Iceland’s volcanic power was put to use strictly for leisure purposes 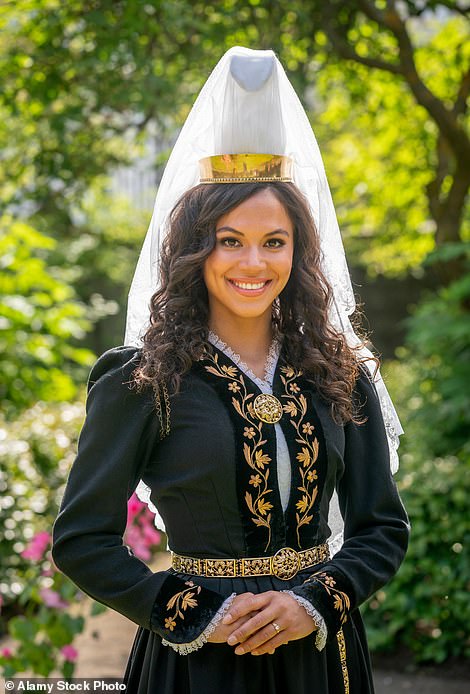 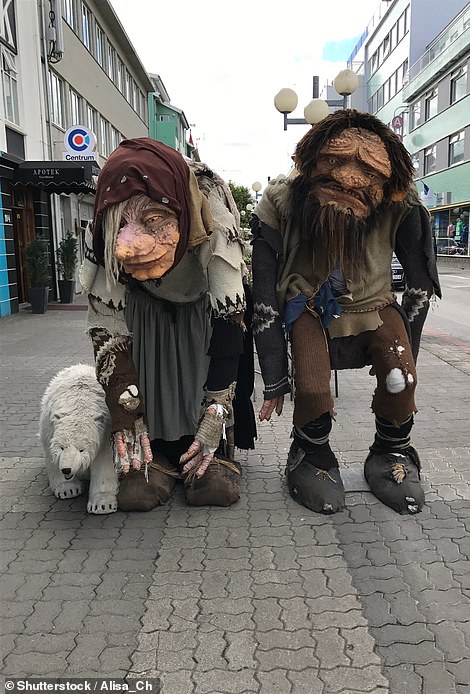 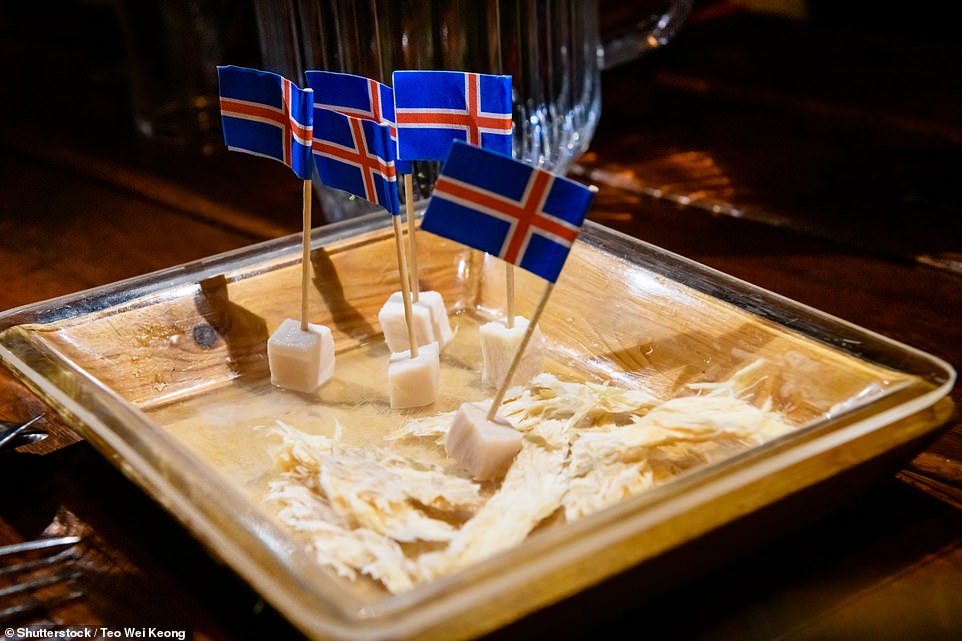 Egill Bjarnason notes that many tourists want to try fermented shark, which ‘most locals stopped eating with the arrival of the refrigerator’

Trolls and elves… but no mosquitoes

Part of that interest lies in understanding our history. Which takes me back to Hallormsstaður Forest. This may seem like the least typical Icelandic landscape — yet back when Iceland was first settled, trees covered a third of the country.

Half the size of the United Kingdom, it was the last major territory to attract human settlement in the Northern Hemisphere. The remote island had existed for millions of years merely as a place of birds and one solitary mammal — the Arctic fox — when Man finally arrived there 1,200 years ago.

That visitor was a Viking captain who ran aground in the middle of the ocean, stayed for a winter and left. Iceland, you see, was not fun until people learnt to harness its heat and power. This was achieved in the centuries to come, thanks to the exceptionally active ‘hot spots’ where molten rock (magma) streams continuously from the centre of the Earth (the mantle) into chambers beneath the crust.

Iceland is on a tectonic plate boundary, sitting atop the fissure that separates the Eurasian and North American plates. These are constantly moving apart — by about 2.5 centimetres a year — which causes eruptions every five years or so.

One is taking place right now and has been since March, on the long-dormant Reykjanes Peninsula, 19 miles from Reykjavík. This is not far from one of our most famous attractions: the Blue Lagoon geothermal waters.

For a long time, the Blue Lagoon was the only place where Iceland’s volcanic power was put to use strictly for leisure purposes. And even then, in the early days, visiting it was considered most appropriate for sufferers from the skin condition psoriasis, who came to bathe in the muddy waters of algae and silica.

Much later, the therapeutic effect of soaking in warm water under the bare sky, perhaps in violent weather and the company of other naked humans, was realised.

Now there are many more such spots. The latest is the Sky Lagoon, on the edge of Reykjavik, which has an ocean view and a swim-up bar with colourful cocktails. Elsewhere, GeoSea is at the edge of a cliff in the northern town of Husavik, with an open view over the wide Skjálfandi Bay.

The bay’s mouth gapes northward — towards the Iceland Sea, the Greenland Sea, the Arctic Ocean and, beyond that, the North Pole. Last year, this town was the subject of the film Eurovision Song Contest: The Story of Fire Saga, released on Netflix last year.

By the street leading to the bath, a local businessman has opened a bar named Jaja Ding Dong after the silly song in the film. As the bath is close to shore, the water from the hot spring supplying it is mixed with seawater.

‘It’s a very pure and simple way to enjoy Iceland,’ says the manager, Armann Gunnlaugsson. ‘What we offer, really, is hot water.’ At the harbour in Husavik, the whale watching ship Náttfari is about to depart for a three-hour tour.

The sky is grey and passengers are dressed in warm sailing suits with bright yellow hoods. I check the weather forecast. West­ ­Iceland has sunshine and temperatures of eight degrees Celsius; six degrees above Husavik.

This is just the way it is. Tomorrow it may be the other way round. Iceland can often feel as though it is living up to its name. Come and find out for yourselves.

Egill Bjarnason’s How Iceland Changed The World: The Big History Of A Small Island is published by Icon Books. 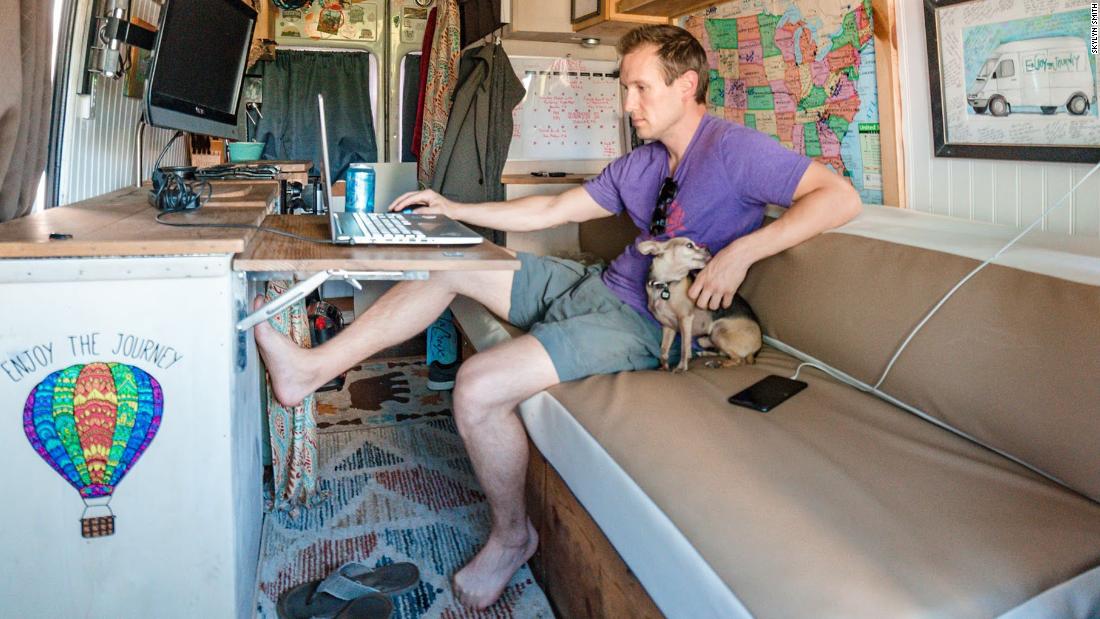 People who live in vans and RVs are facing hardships during the coronavirus pandemic, but they’ve also got some advantages. Read more […] 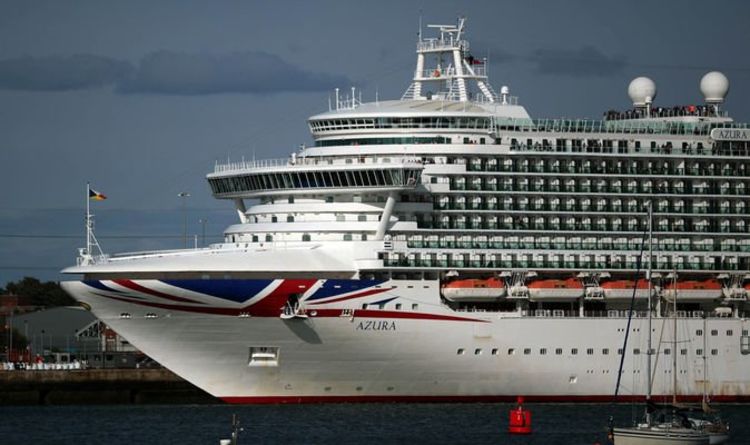 More than 1,000 mostly British holidaymakers were unable get back aboard P&O’s Azura luxury cruise ship after spending the day in the […] 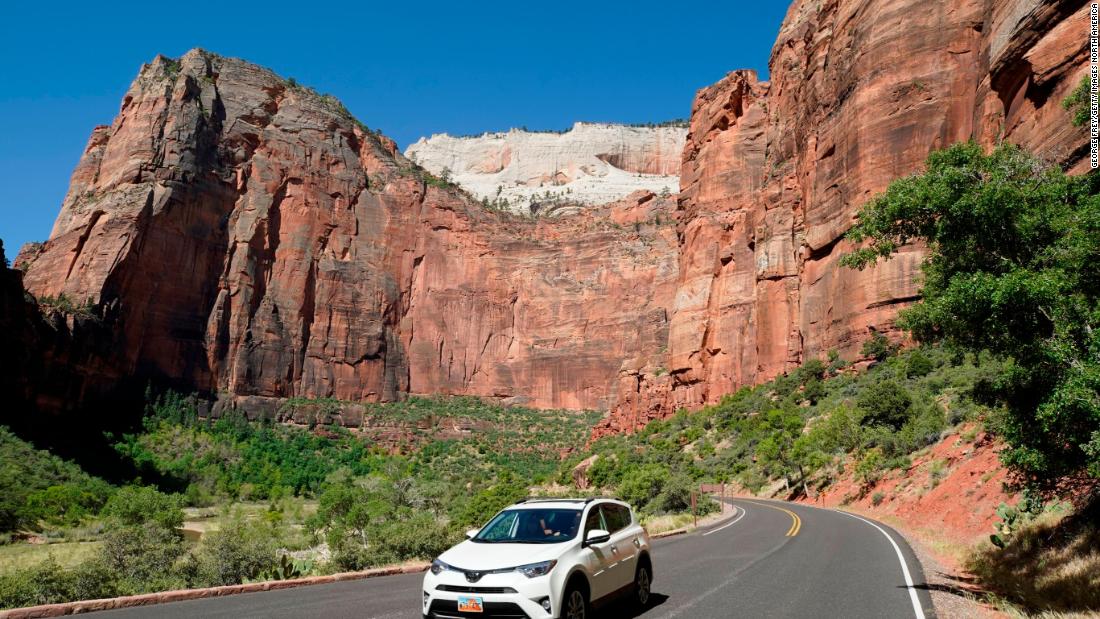 (CNN) — In this new normal where everything is a calculation, summer vacation presents a whole host of questions. Is (fill in […] 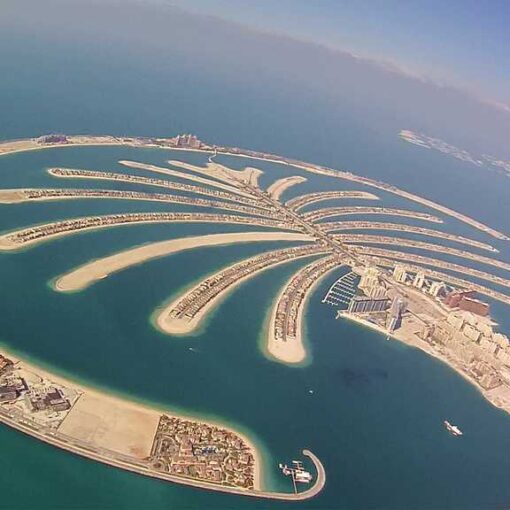 Palm Island (c) flickr/Richard Schneider In recent months Dubai, a member of the United Arab Emirates (UAE) has seen a rise in […]