With just over a week to go until Gareth Southgate names his England squad for this summer’s Euros, excitement is high as opinions are voiced on who has to make the cut.

The England boss has the luxury of selecting a 26-man squad this time, which he will reveal on Tuesday 25 May, for the tournament which gets underway for Southgate’s men against Croatia at Wembley.

Ahead of next week’s announcement, BT Sport pundits Rio Ferdinand, Glenn Hoddle and Joe Cole got together to each select their England squads, before combining their opinions to pick a first choice starting XI. 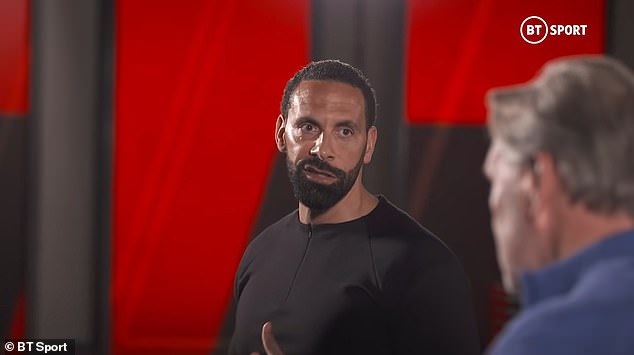 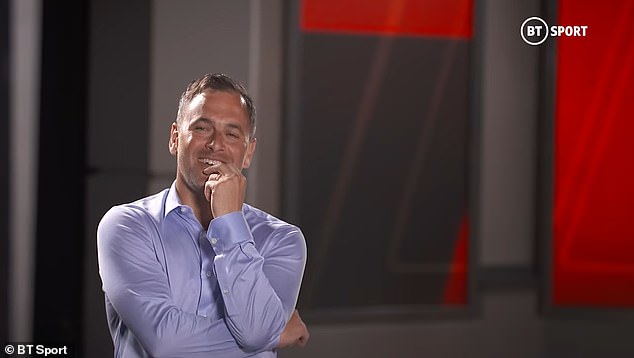 Ferdinand had no room in his squad for Kyle Walker or Kieran Trippier, with the former Manchester United defender instead opting for Trent Alexander-Arnold and Reece James at right-back.

‘Walker I think would be the unlucky one in my squad, and he’d have really good grounds to ring me up and give me a piece of his mind,’ Ferdinand said.

‘I like youth, I want to give youth a chance.

‘I’m looking ahead as well, not just this tournament. This has been a bit of a weird lead up – I’m looking at this as almost a free hit for someone like Gareth.

‘You can introduce some young players, give them experience, really expose them to what a tournament is like.’ 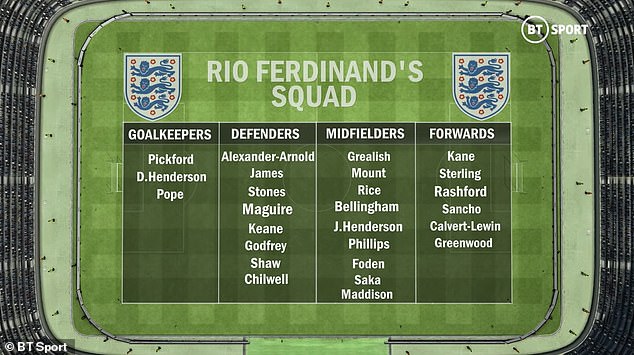 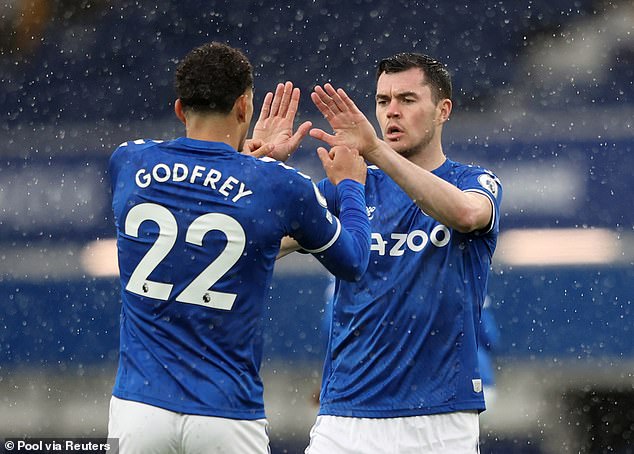 That belief in youth is seen throughout Ferdinand’s squad, with faith placed in the likes of Jude Bellingham, Mason Greenwood and Bukayo Saka.

In defence he opted for Michael Keane and Ben Godfrey, favouring the Everton pair over the Aston Villa duo of Tyrone Mings and Ezri Konsa.

Hoddle agreed with much of Ferdinand’s squad, though decided to pick West Brom goalkeeper Sam Johnstone as the third-choice in between the sticks instead of Dean Henderson.

‘I really like Johnstone,’ Hoddle said. ‘I think this fella, if he goes to another club where he doesn’t have to make seven or eight saves every game which he’s at to do over the course of the season – I think he’s a top goalkeeper.

‘I think he should be in (the squad) pushing those. If he was in a bigger club I think he’d be on everyone’s lips.’ 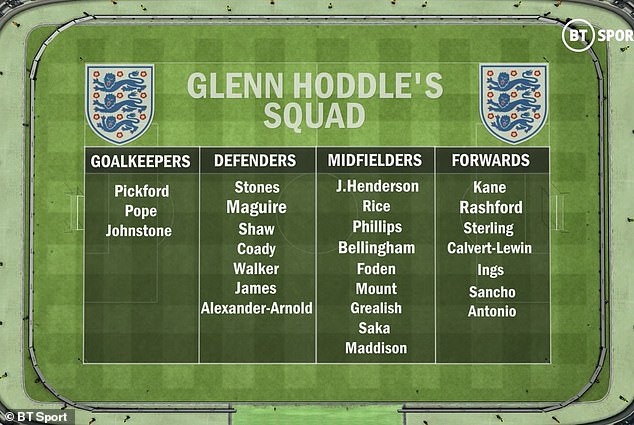 As a result of picking only seven defenders in his squad, the former England manager also had room for an extra forward.

West Ham’s Michail Antonio got the surprise call-up from Hoddle, who was full of praise for the 31-year-old.

‘This fella was as good as anyone in the league this year – holding the ball up, turning, getting in behind,’ Hoddle said.

‘The last ten minutes of a game, that’s where I’m thinking from. You put him on. You give a totally different scenario to the centre backs you’re playing against. 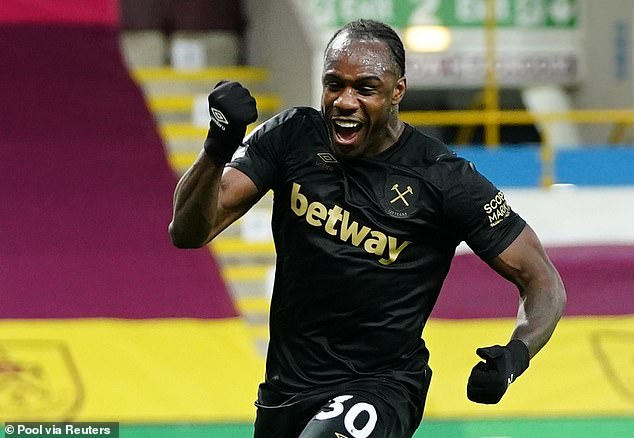 ‘The last give minutes of any game, in any era of football, should be get it in the box.

‘Get it in the box, get the second ball, get a handball, it’s about winning the match or getting a draw if you’re losing.

‘These players have an impact in a different way. It hasn’t always got to be the silky number 10s that are going to come in and change the game.’

Cole decided to go for a very different approach to Hoddle, picking nine defenders in his squad as he prepared a group of players for a back three.

But while he went big on the number of defenders, Cole believes it’s the quality of England’s midfielders on the ball that will serve them well in this summer’s tournament. 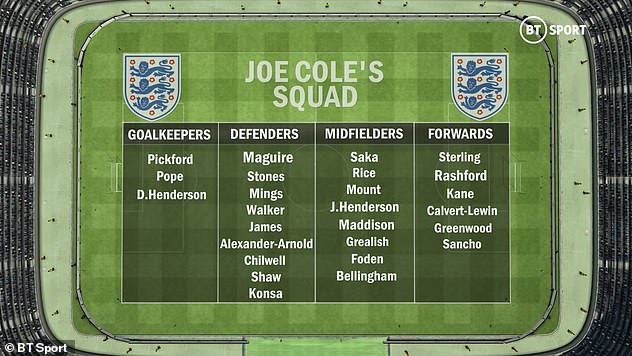 ‘The rhythm of international football, they can handle the ball. Whenever I’m picking England squads, I go back to the semi-final against Croatia when we were 1-0 up.

‘They had Modric and Rakitic in midfield, we still had Henderson, Lingard and Alli. Lots of attributes, but not handling the ball and getting us up the pitch – taking the sting out of the game.

‘Now we’ve got an abundance of these players.’

The three pundits also settled on a combined team they would choose to start for England, and it had some picks very few would expect. 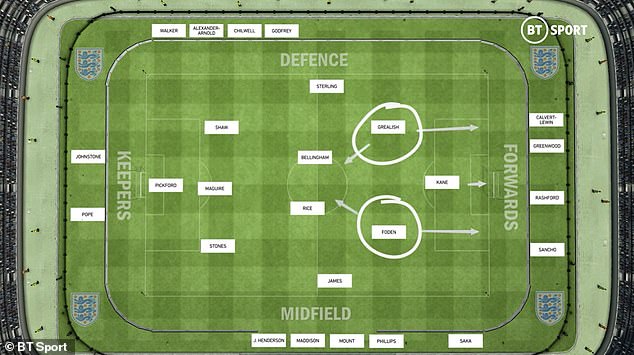 Raheem Sterling was chosen to play at left wing back, an idea proposed by Hoddle with Luke Shaw on the left of the back three to offer protection for the Manchester City forward.

Ferdinand suggested it’s unlikely we will see England line up with Sterling at wing back for their first group match against Croatia.

‘I’ll tell you what – I know one person who’s not playing that, and that’s Gareth Southgate!’ he joked.

Hoddle insisted it could be a wise decision though, advocating for England to adopt a tactically flexible approach that could change throughout a match. 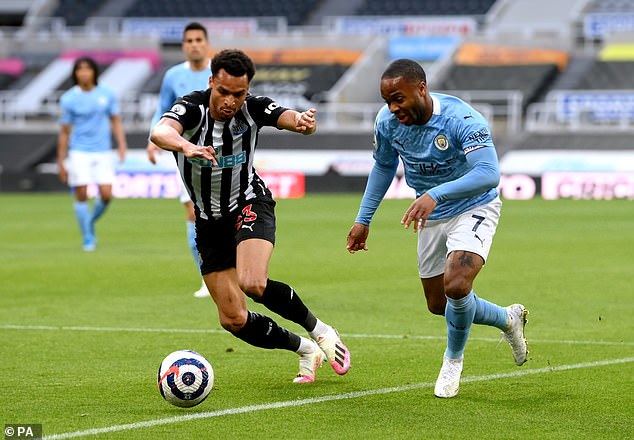 ‘This is where people I think get carried away with systems,’ Hoddle said.

England have two warm-up fixtures before the Euros get underway, both at the Riverside Stadium.

Gareth Southgate’s men face Austria and then Romania, before their attention turns to Croatia and the start of the group stages.

Watch the latest episode of Rio Ferdinand’s Between The Lines: England Euro 2020 Squad Debate in full on the official BT Sport YouTube channel. 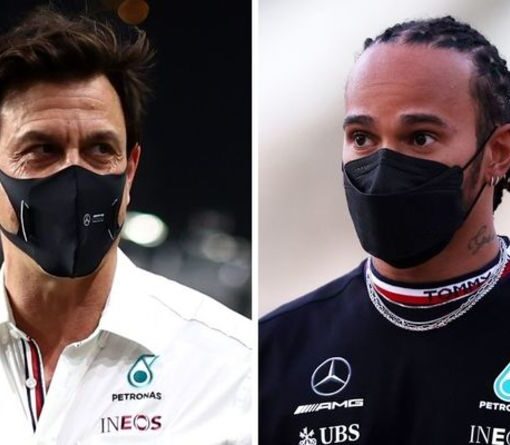 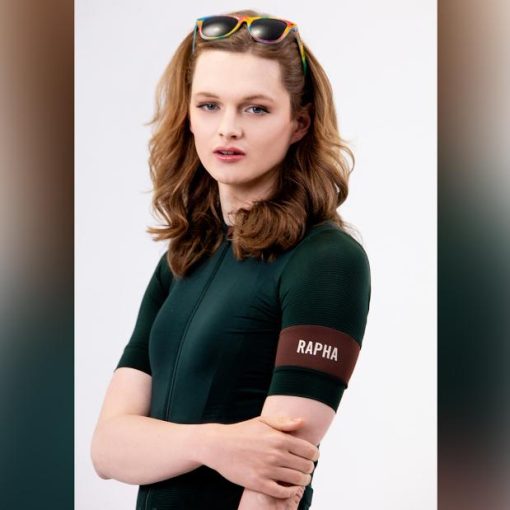 Emily Bridges, who was set to race against British Olympic stars such as Laura Kenny in the event, said she found out […] 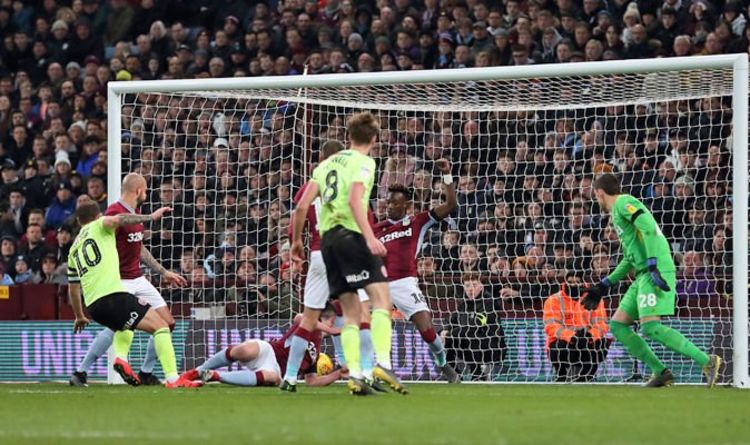 Sheffield United are gunning for Premier League promotion this season. Leeds and Norwich are also vying for the top two spaces in […] 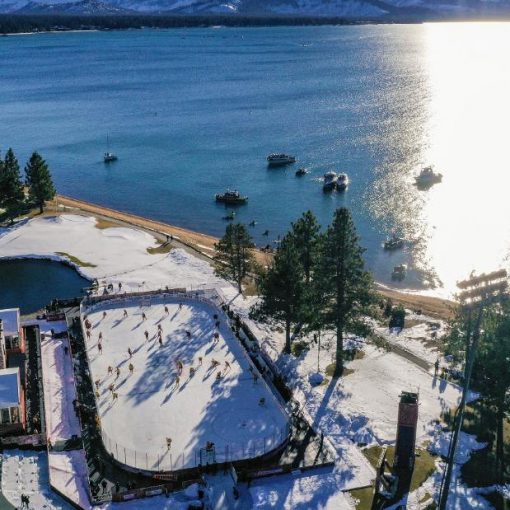 While the National Hockey League has hosted the Winter Classic in some spectacular locations, none has come close to this year’s event. […]